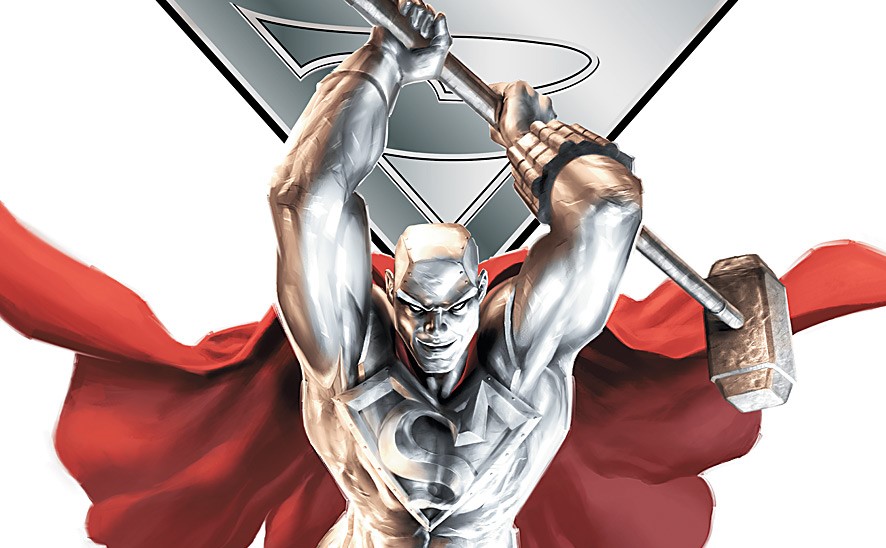 In 1992, DC Comics made the decision to kill their flagship character Superman in a then-new storyline called The Death of Superman. Though a fictional story, the death of such a beloved icon got unprecedented mainstream media coverage from CNN, NBC and the like. The comic which features Superman’s death (Superman #75) sold over six million copies and was easily 1992’s top-selling comic.

“The Death of Superman” was divided into three story arcs:

The last arc “Reign of the Supermen!” saw the emergence of four Supermen trying to take place of the original. One such ‘Superman’ is the subject of today’s article: an African-American male who was inspired by Superman to create his own superhero identity called STEEL.

Doctor John Henry Irons was born in Metropolis. Irons’ parents were murdered when he was young and he promised to protect the rest of his family by becoming rich and powerful. He goes on to attend Yale on a sports scholarship and becomes a brilliant weapons engineer for AmerTek Industries. Despite the wealth and fame he receives, Irons became disgusted when he discovers the BG-60, a powerful energy cannon he designed, fell into the wrong hands and was used to kill innocent people. As the company would have coerced him to retain his services, John faked his own death and came back to Metropolis under the alias of Henry Johnson.

During Superman’s fatal battle against Doomsday, Irons, who was still working in construction, attempted to help Superman fight the deadly menace by picking up a sledge hammer, but Irons ended up buried in rubble amidst the devastation.

He recovers from being buried but it is too late as Superman dies in his battle against Doomsday. He also finds out that the gangs in inner-city Metropolis (now without Superman to fear) are waging an intense gang war using BG-80 Toastmasters (an upgraded version of his earlier AmerTek design).

Upon this discovery, Irons made a vow to stop the abuse of his weapons:

“John Henry fought the machine and won. What I’m fightin’ is a deadlier kind of machine — one I helped put in motion. One I’m gonna stop — even if it kills me”.

The Reign of The Supermen

The “Reign of the Supermen” story arc saw the rise of four “Supermen” ( Most of whom claimed to be Superman reborn).  Each one of them represented the embodiment of a different nickname associated with the original Superman.

After the return of the real Superman, Irons was urged to continue fighting crime as The Man of Steel, which was later shortened to “Steel” by Superman himself. 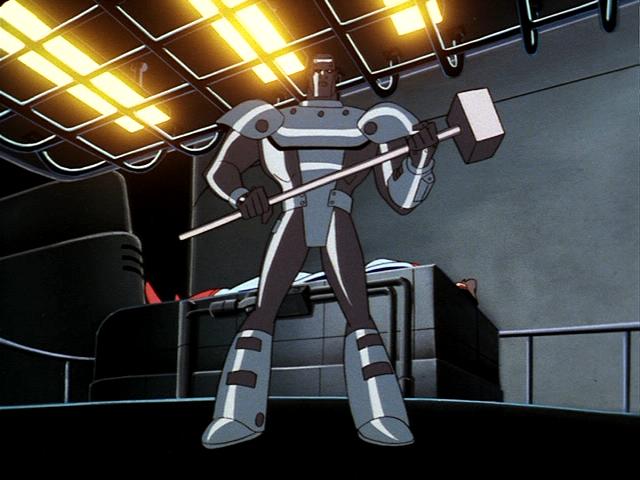 John Henry Irons’ first multimedia appearance was on Superman: The Animated Series on Kids WB!. Voiced by actor Michael Dorn ( ‘Worf ‘ from ‘Star Trek: The Next Generation‘), John Henry Irons is introduced as a designer for LexCorp who creates a Robocop-like prototype suit of armor for the Metropolis SCU (‘Special Crimes Unit‘). However, the suit’s neural interface system has adverse psychological effects on its user Sgt. Corey Mills.

After warning Lex Luthor this would happen, Luthor’s callousness on the matter caused Irons quit LexCorp. Encouraged by Superman, Irons worked on perfecting the suit in his private lab with the help of his niece Natasha. Superman is weakened by Kryptonite poisoning in a battle against the cyborg villain Metallo and Irons becomes the superhero Steel just in time to save Superman. This animated version of Steel is missing the cape he adapted from Superman, he lacks his ‘S’ chest shield and his rivet guns were replaced with forearm-mounted lasers. Irons appears as himself in the episode “Prototype” and as Steel in the episode “Heavy Metal“.

NOTE: Both episodes were released the same year as the live action feature film Steel. 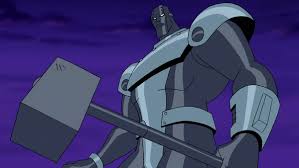 Steel returns in Justice League Unlimited, this time voiced by actor Phil LaMarr (MAD TV, Pulp Fiction). He is seen as a member of the expanded Justice League. Steel has appeared regularly in the company of Superman and Supergirl. His major appearance is when he attempts to hold off Galatea from destroying the Watchtower. He was later seen with Supergirl in the episode “The Return” where he tries to prevent Amazo from reaching Lex Luthor.

The production of a live action depiction of the comic book Steel started with legendary music producer Quincy Jones and his partner David Salzman. As it turns out, both Jones and Salzman were fans of the Steel character. Jones, in particular, found personal reasons to support the project.

Jones stated that he found children’s “perspective on the future has changed for the worse, and I hate seeing young people who don’t believe in the future. Steel—and I don’t want to use that word ‘superhero,’ because he doesn’t fly or anything like that—represents a role model. Let’s just call him a ‘super human being.'”( 2020, Steel (1997 film), Wikipedia).

The screenwriter and director of Steel was Kenneth Johnson. Johnson had previous success in sci-fi television, creating shows like The Bionic Woman, Alien Nation, and The Incredible Hulk. Johnson was originally uninterested in doing a superhero film but film producer Joel Simon described Steel as being different, stating that he was “a knight in shining armor in a contemporary setting” ( 2020, Steel (1997 film), Wikipedia).

With that in mind, Johnson intended to separate the film itself from the comic book series in a number of ways:

The filming schedule consisted of fifty-one days with thirty-two full nights of shooting in downtown Los Angeles. The shooting schedule presented difficulties for the director due to the schedule of then-superstar basketball player Shaquille O’Neal.

In addition to his arm tattoo, Shaq at point owned a mansion in South Florida with the Superman logo adorned through out his home

This film stars Shaquille O’Neal as Lt. John Henry Irons, a 7 foot tall weapons designer for the United States Army whose inventions include high-tech laser guns, protective armor, and sonic cannons. During a demonstration, an accident caused by rogue designer Nathaniel Burke (Judd Nelson) results in the death of a Senator and leaves Iron’s partner Sparky (Annabeth Gish) paralyzed. Irons reveals Burke’s role in the incident in court and Burke is dismissed from the military.

Because his weapons resulted in Sparky becoming a paraplegic, Irons resigns his commission in disgust and returns home to Los Angeles. Very soon, Burke heads to L.A. as well and begins mass-producing Irons’ weapons using an arcade game company called Dantastic as a cover. Burke is intent on selling them to street criminals and , eventually, world-wide militias and criminal organizations via the Internet.

One night, Irons witnesses a bank robbery organized by a group of gang members called ‘The Marks‘ using modified versions of his weapons. Getting Sparky out of a veteran’s hospital, Irons takes her to his own assembled laboratory in his Uncle Joe’s junkyard, where he reveals his plan: Irons and Sparky will create weapons to combat the ones being used by the criminals. Together, they forge a suit of armor and a hammer that contains their combined weaponry. Upon completion of the armor, Uncle Joe proclaims: “Well, I’ll be damned. John Henry Irons has turned himself into The Man of Steel”. With  Sparky and Uncle Joe as tech support, John carries out his war on crime and become the armored vigilante dubbed ‘Steel’ by the media.

Steel was released in the United States on August 15, 1997. Steel was considered a large box office bomb on its release with an estimated budget of $16 million, the film grossed just over $1.7 million at the box office. The film grossed less in its entire run than Batman & Robin (1997) made in its first weekend.

The Death and Return of Superman comic storyline had been adapted into a number of animated films ( most of which feature Steel) . The most recent animated adaptation was released as a two-part film, The Death of Superman and Reign of the Supermen, in 2018 and 2019, respectively. 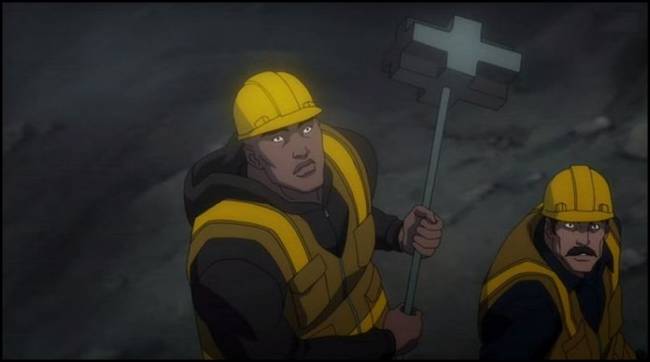 John Henry Irons appears in Justice League: Throne of Atlantis. Voiced by Khary Payton ( ” Teen Titans“, “Teen Titans GO” ), John is seen as a construction worker wielding a hammer. While defending a co-worker from an Atlantean, he ends up being saved by Superman at the construction site. Superman flies away to deal with the pending threat, not knowing he had just changed Irons’ life. 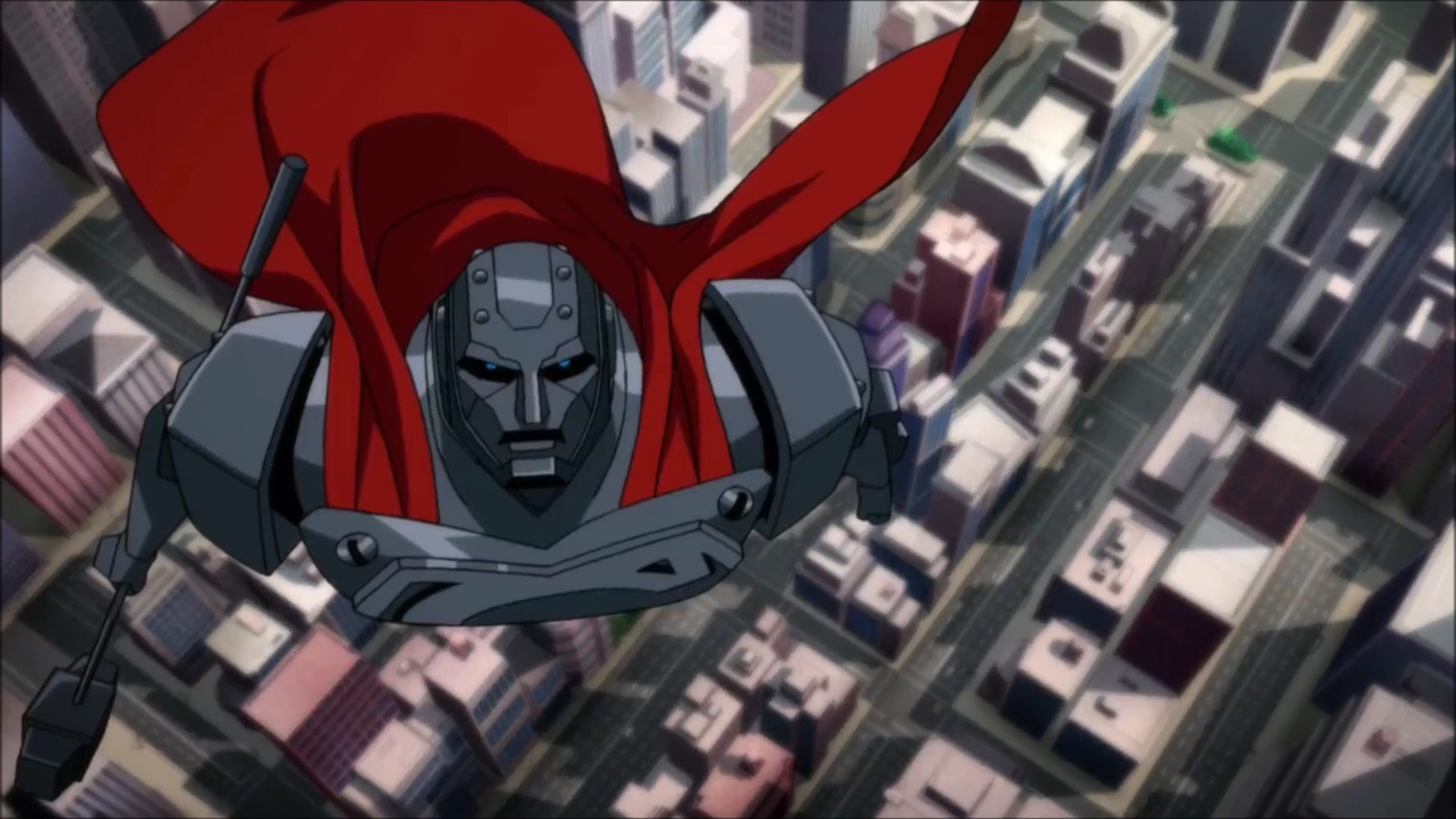 John Henry Irons next appears in The Death of Superman, voiced by Cress Williams ( “Black Lightning“).  After his life changing experience in Thorne of Atlantis,  Irons is now a S.T.A.R. Labs scientist. He is also a hardcore Superman fanboy (He constantly wears a Superman t-shirt under his lab coat). After Superman’s death in the film, Irons is seen preparing his Steel armor during the mid-credits scene. 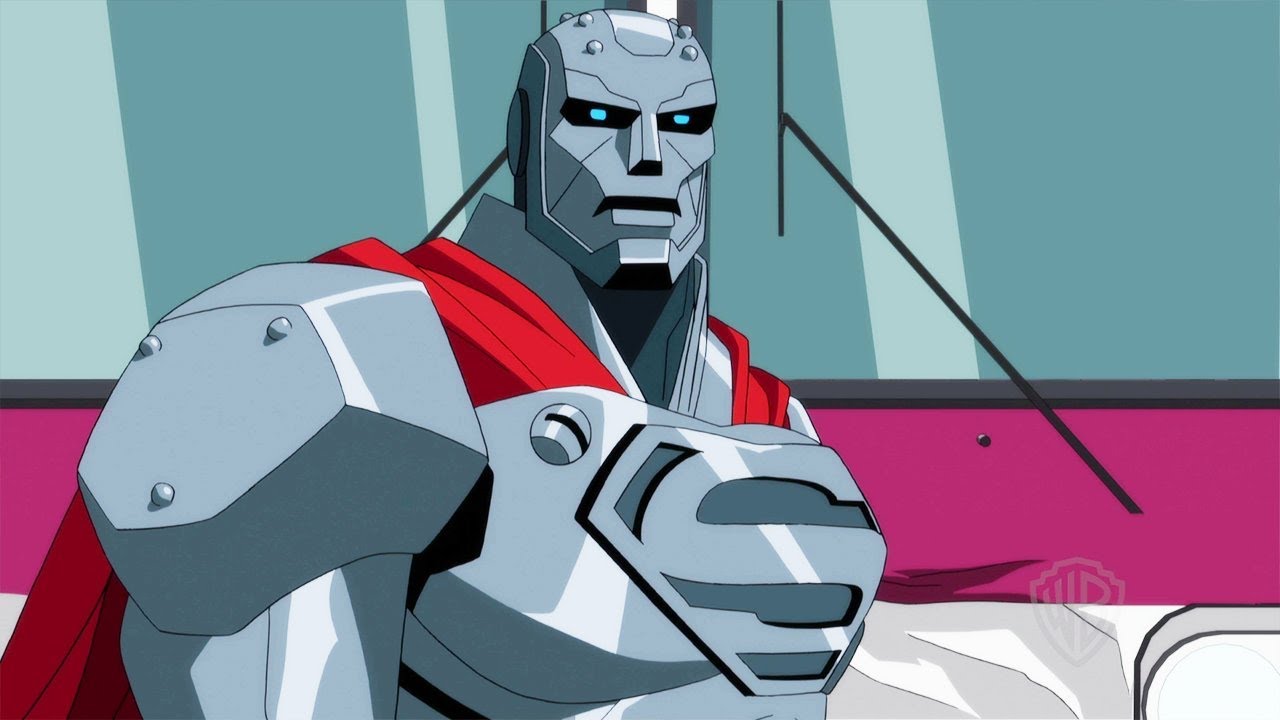 John Henry Irons appears again in the sequel Reign of the Supermen, with Cress Williams reprising his role. Six months following the death of Superman at the hands of Doomsday, four new Supermen have emerged and become controversial to the world. Lois Lane begins investigating the new Supermen by gathering information from different sources. Lane befriends Irons after she easily discovered his secret identity. Irons has officially adopted the name Steel and comes into contact with the other Supermen.

Steel makes a non-speaking appearance in Justice League Dark: Apokolips War. He is among the heroes fighting against Darkseid’s Parademons. His current fate is unknown as he was either killed or erased from existence when the Flash had to create another Flashpoint.