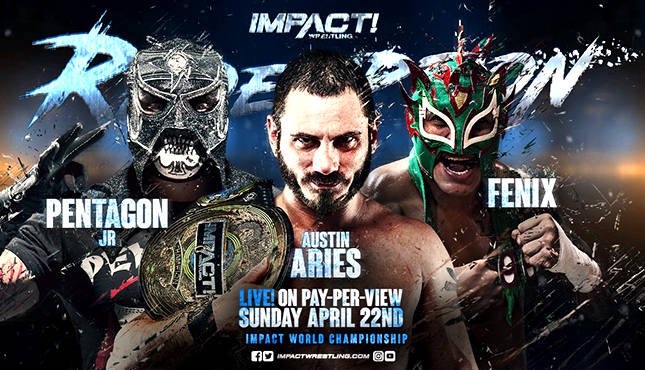 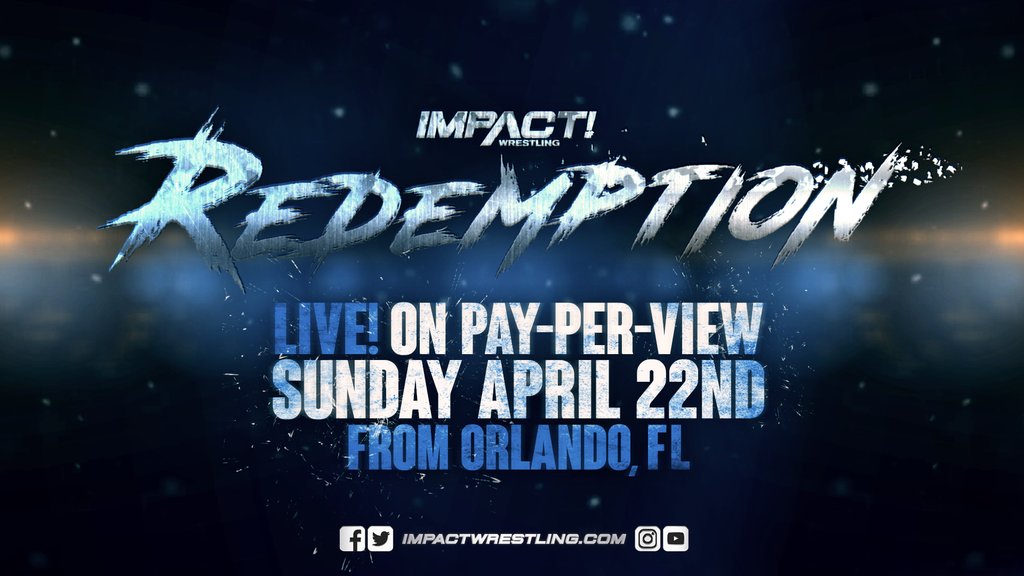 “PASTOR” Shawn Puff: Wow!! This is the first Sean & Shawn Show of the year. Where have we been? We’re like the Alberto Patrons of the Apostles. It’s time for Redemption, perro!! 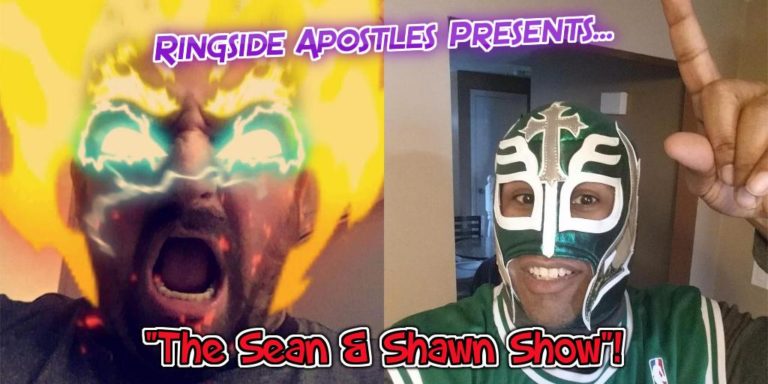 “FATHER” Sean Farrell: Lucha ! Lucha ! Lunch ——- oh wait. Man we’re as serious as a late peri—- Nah. Not going to stoop to quoting Konnan. At least HE shows up to work. I won’t mention that this show costs $40 on PPV. What is this, 1998 ? Ain’t nobody gonna pay $40 for ONE show who’s main event is a rematch of a show ya just saw for FREE two weeks ago….

Shawn: Ok. I’m a fan of the direction Impact is going, but this agreement with all these other promotions gets me confused. … Guess I’m gonna need to get caught up with Lucha Underground. So this Drago guy… he’s like a real dragon? … that became a man? And Aerostar is a luchador… from space? … who can fly??? … Ok. I know it’s 4/20, but really?? … Ehhh, at least it’s not Mae Young giving birth to a hand. This will be a great match though, all kidding aside. Possibly the best on an Impact card this year. I guess I’ll go with Drago on this one? Dragons can’t be defeated right, Sean?

Sean: Aerostar and Drago do work against each other all over the world, including the temple in Lucha Underground. Yes Drago is a dragon who actually turned INTO a dragon on screen once (I think Season 1 of LU) while Aerostar uh, it’s a cool Lucha mask ? This will be a spotspotspotspotfest type of contest. It won’t be boring that’s for sure. I’ll say Aerostar wins just because you picked Drago.

Shawn: NICE! It’s a match with all the guys that do flippy stuff … and Brian Cage. I can’t stand Trevor Lee. They should give him a caveman gimmick and bury him. It’s good to see DJZ back, I guess. He should fill the role of “spot-monkey” rather well. Desmond Xavier is just boring to me. There is nothing to make me care about him or that makes him stand out. Maybe I’m just like Booker T and don’t want to give any love to other black wrestlers. It’s an “Alpha Black” complex. Taiji is a former X-Division Champion. Seeing as he recently left Pro Wrestling NOAH, I expect to see big things from him soon and I also expect some big spots from him in this one. King Cuerto, I mean El Hijo De Fantasma … ehhh, who cares. Is there any question Brian Cage is walking out of here with the win?

Sean: My man Brian Cage isn’t just a man …. he’s a machine ! This is going to be a car crash of styles where the only one who’s going to be left standing is Cage. The dude is money all day long. Expect a good showing from Dezmond and Taiji too. I never warmed up to DJZ. El Hijo works as King Cureno in LU, the mighty hunter – he’s a mechanic for sure. He’ll be the glue but he won’t walk out the winner.

Shawn: The Undead Bride challenges Allie for the Knockouts Championship. Allie is the most ANNOYING female wrestler on my television. Su Yung did a good job at making Rich Swann go away. Hopefully she makes Allie go away too. Unfortunately, I don’t see any point in her dropping the title here so I expect to have to here more from Allie with that damn belt in the coming weeks.

Sean: Allie works all over but her in-ring work during her Impact run has been limited and un-good. I’m still holding a grudge towards Su Yung for being instrumental in Swann losing his “charm”. Come on Allie – show Su Yung the exit – then boot her ass out the door. Can you handle that ?

Shawn: I’m not quite sure what a House of Hardcore match is, but I’m thinking it’s very similar to what you’d see in ECW Arena 25-years ago and also a total shameless plug for Dreamer’s own federation, House Of Hardcore, which airs on Twitch. Impact is loving the heat Sami got from the baseball bat incident with Eddie Edwards, even though it was an accident so expect to see a lot of Ohio Versus Everything on your TV screens in the coming future. This could be the feel good moment of the night with old man Tommy Dreamer and two of the faces of the company going over on the bad guys in a specialty match, but I think that’s going to be reserved for Allie retaining. Therefore, the boys from Ohio are going to ride that wave of heat and beat these three from pillar to post and walk out victorious.

Sean: Thumbs Up ? Thumbs Down ! Ya, don’t mess with 2018’s version of Terry Funk. Dreamer is the man who never says die. This match will be filled with plunder and mayhem with the Hardy Boyz-Wanna Bes and NXT washout (who might as well be playing for my Yankees with his bat swinging abilities) get beat down by Moose, the human target Eddie and Dreamer. HOH shameless plug ? It’s a fun production and Dreamer deserves your attention.

Shawn: This one is kind of strange to me… E. Li. Drake. Has BOTH briefcases and he chooses to cash in for the tag titles when he really wants the world title?? And he chooses The Big Bad Booty Daddy as his partner?? That guy is a maniac!! This one could get interesting considering the disparaging remarks Steiner made about Mexicans in a recent shoot interview. I don’t know what they’re doing with this one. I’m gonna go out on a limb and say Drake and Steiner win because why not? What else are they gonna do?

Sean: Look, I’m a Steiner-apologist. But uh, what in the hell is he doing ? Was he “working” or “shooting” ? Can we even tell anymore ? Scotty has joined the “keep your shirt on in the pool club and that’s just kinda sad. But at least wrestling’s second worst tattoo will be covered up. Eli Drake is the true odd duck in this match. Guy works super hard, is a great promo and will do better in greener pastures. LAX ? These guys rarely disappoint when they’re inside the ring. They’ll be making real money sooner rather than later. Ditch Konnan and your stock will go up even faster. LAX for the Win. Why ? Because Steiner is a maniac who can’t be trusted. Holler if ya hear me !

Shawn: WHOOPIE!!! Matt Sydal versus Petey Williams. Just the match I’ve been waiting for. No, but seriously, I hate Matt Sydal. Which might be messed up to say on 4/20. Especially since his spiritual guru, Josh Matthews is also my weed guy. Oh well. Whatever. Please great spirits, let Petey Williams give Evan Bourne a Canadian Destroyer and take that title off of him in a total squash. Namaste.

Sean: Matthews better take more Canadian Destroyers than you’d see at a typical Indy show. Sydal is a talented worker who has half the charm as X-Pac. Just not someone I want on my television. These two have a looong history together. Sydal was the first guy to get pinned by the CD when Petey invented and perfected the move back in the early 2000’s. Here’s hoping history repeats itself.

Shawn: How did this happen again? Oh yeah, Alberto El Slapnuts pulled a no show at WrestleCon, got himself fired and they panicked. Makes perfect sense to put the world title on the line against two guys from a completely different promotion for no real good reason, other than they had a great three-way in NOLA. Wouldn’t it have made more sense for E. Li. Drake. To come out and cash-in his briefcase for his world title shot since Patron got fired? Dummy!! Yeah!! Maybe they’ve just got some good writers back their finally and they’re going to steal a page from the WWE’s book. The Greatest Man To Ever Live wins a grueling match to retain his title only to have The Namer of Dummies come out and cash-in his briefcase on the spot and walk out of Redemption your NEW Impact Tag Team AND World Champion, E. Li. Drake!!

Sean: Not going to miss Alberto. These three worked hard on Mania weekend in one of the best matches that didn’t take place at TakeOver. Pentagon Jr is my dude ! But I love me some A Double too. Fenix is a bit more miss than hit with me. I do like your idea of Eli cashing in and winning. Makes Impact-Sense to me. Book it Shawn-O ! Now excuse me, I have other things to attend to ! Lucha ! Lucha ! Lunch ! Lunch ! Lunch – Ahhhh !!!!