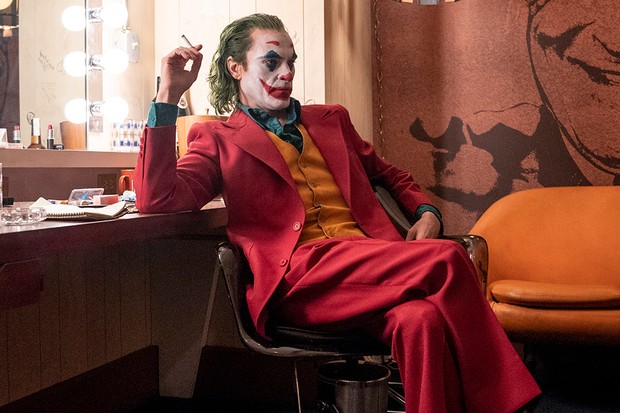 BOO, geeks and geekettes!!! It’s the end of not only Halloween…but also Dia de los Muertos, and have we got some spooky titles this week (including one from the son of the king of horror!) So while there’s still candy corn and witch’s hats laying around, let’s take a look at what’s worth spending your hard earned dollars on, shall we?!

DC’s Clown Prince of Crime seems to be hitting the g-(eek) spot pretty hard the last half of this year and despite my eternal die-hard Bat-Fandom, the thought of me reading and/or watching another incarnation of Batman’s most notable foe seemed near daunting. Thankfully and unsurprisingly Joker: Killer Smile by Eisner Award winning team Jeff Lemire and Andrea Sorrentino, with colorist Jordie Bellaire, doesn’t feel like chore (or bore) to choke down as the newest addition to a growing list of Joker media.

As an intro issue, it comes off as a familiar face in which psychiatrist, Dr. Ben Arnell, thinks he can “cure” Joker. But as time (and continuity) has told, Dr. Arnell has his work cut out for him as he attempts to unravel this unknowable mind, all while trying to keep his own sanity from drowning in a downward gyre pool of madness. 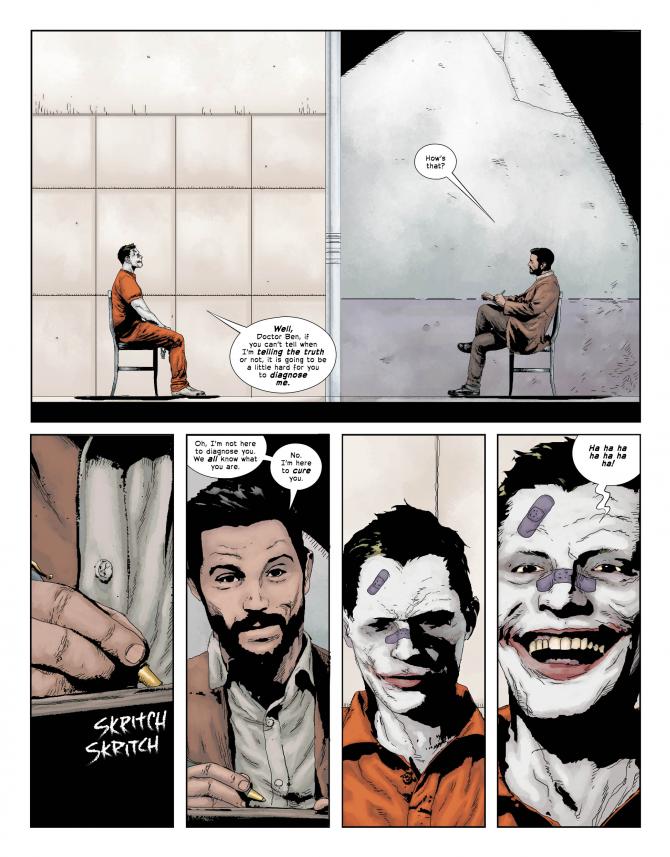 Here Lemire takes note of the Joker’s greatest trick with the corruption of one Harley Quinn, and sets up the series as an exploratory look at the psychological effect The Joker has on his surroundings. So far it lacks the contrasting slapstick cheesy humor you’d expect with this subject and essentially reads as a suspenseful thriller told through the need for Joker’s want in creating something beautiful, whatever that is.

Lemire again provides proof of his unlimited ability for ominous creativity, and it’s no wonder that Sorrentino melancholy artwork and Bellaire’s perfectly matched colors are partnered with his work. 5/5 Crooked Smiles.

Joe Hill launched Hill House Comics, a place where horror and comics could come together in ghoulish delight, and Basketful of Heads is one of his personal contributions to the new line. Set in the early 1980’s and evoking Amity Island feels in both the setting, introduction of the character, and costuming, Hill’s dialogue and Leomacs’ illustrations bring an air of familiarity off the bat.

Basketful of Heads is the story of young lovers Liam and June, celebrating the end of summer (and Liam’s job as a Deputy) on Brody Island. Their plans to get frisky and attend a clambake are detailed slightly when convicts escape transport and find themselves loose on an island. They hole up in the sheriff’s house with his wife, son, and collection of ancient Nordic weaponry (including an axe that mysteriously lit up…..to be continued?).

What is going to happen when the missing convicts stumble into the house in the middle of the night? Only time will tell. Hill has proven himself to be a solid horror storyteller, and Basketful of Heads has the makings of another solid outing. This is the season of being spooky, and this title is a perfect fit. 4/5 Severed Heads.

To say that Excalibur is one of my favorite Marvel concepts is a bit of an understatement. During the glory era of the 90s, the two X-titles that I would go out of my way to get my hands on were Peter David’s X-Factor and Claremont/Davis’ Excalibur. This creative team does a good job of carrying the torch. War rages on in Otherworld. Its current regent, classic Marvel villain Morgan Le Fay. The sorceress is having a rough go of it due to her powers being interfered with by mysterious fauna…fauna that originates from Krakoa. Howard does an excellent job dropping us into the action and, despite a long exchange going into the history of the Braddock family; she handles Betsy and Brian damn well. Gone are the stalwarts of this book like Nightcrawler, Shadowcat or Rachel Summers. Instead, Rogue, Gambit, Jubilee, Trinary and Apocalypse fill out the roster. Everyone’s characterization felt true, but Jubilee and Trinary really felt like they were just there. Hopefully in future issues, they’ll be fleshed out more.

The evolution of artist Marcus To’s work has been quite the thing to watch. Here, he does his best to pay homage to prolific artists of Excalibur and Captain Britain such as Alan Davis and Leonard Kirk, but still with his trademark animated facial expressions and extra detailed splashes, like the celebratory scene on Krakoa. Colorist Erick Arciniega’s colors were bold, going heavy on the pinks and blues. I think that, stylistically, this works for the most part, given that Psylocke was our point of view character for this story. With Betsy returning to her original body and her sporting an updated version of her original costume, that palette seemed apropos. 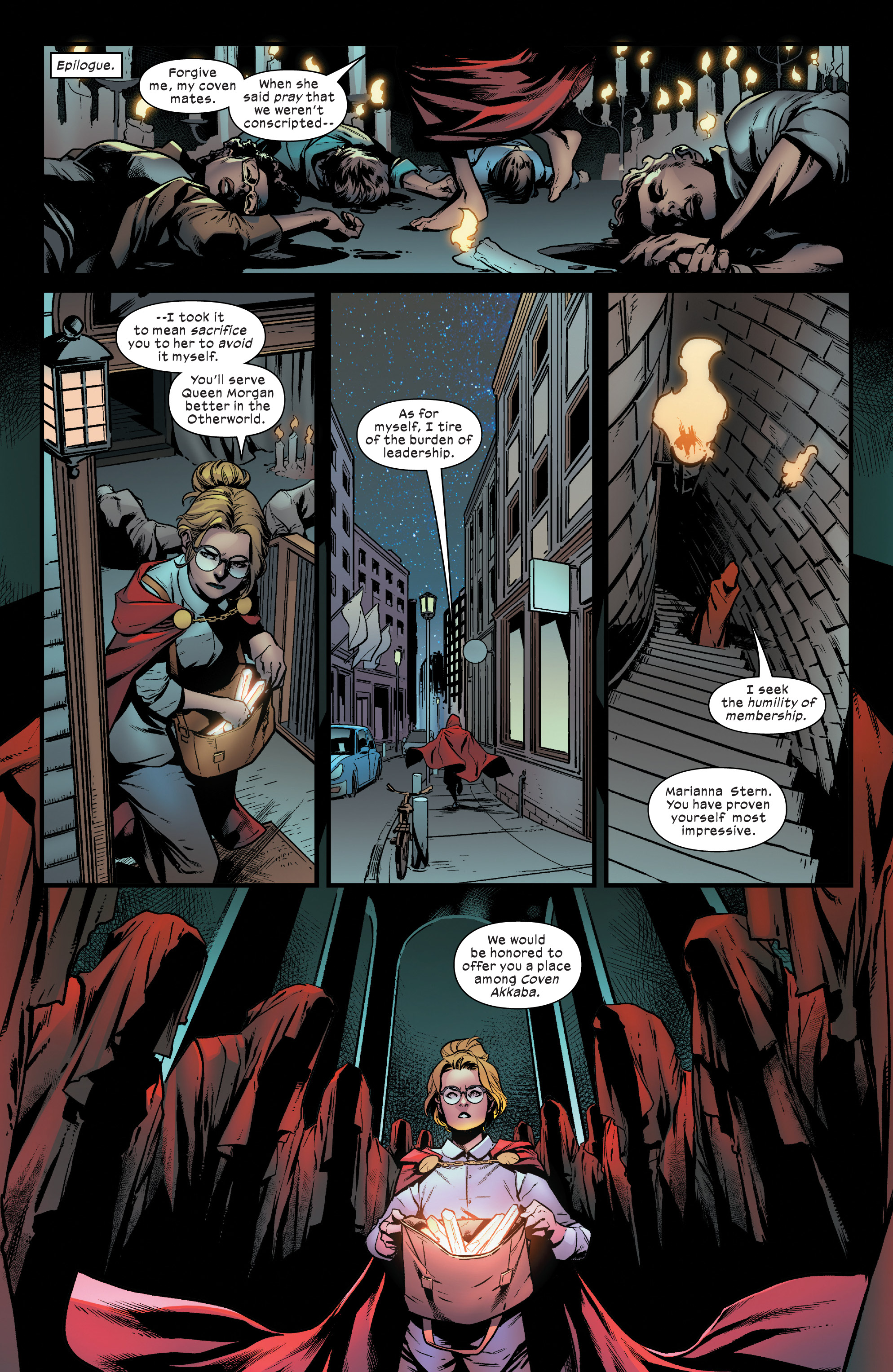 I’ve heard rumblings of complaints about the surprise last page. And to all those people, I ask this; have you EVER read an issue of Excalibur? This may be the best work from writer Tini Howard in quite a while. And if you’re a diehard X-fan but have not been a fan of the other X-titles that are closely tied to Hickman’s concept (I mean, I am, but I know of people who aren’t), then this is the book for you. 4/5 Bibles.

Summarized from inside the front cover, “Spider-Man cured Norman Osborn of his Green Goblin serum induced insanity by injecting him with an antidote… he found the one thing that could purge the antidote… the Carnage Symbiote… The Red Goblin was born!” This comic is told in three parts: “Great Responsibility”, written by Rob Fee, art by Pete Woods; “Big Mouth”, written by Sean Ryan, art by Pete Woods; and “The Wayside Darkness”, written by Patrick Gleason.

These three parts are just massive killing sprees. Very gory, but awesome! Norman tries at the beginning to keep the Symbiote’s violence at bay, but eventually, and not surprising, he cannot keep his hunger for killing under control. These action shots look AMAZING and scary. Shots where Red Goblin is just staring down its target. The last panel in “Big Mouth” comes to mind. It is a shot, staring at the Red Goblin from the point of view of inside the mouth of the person who is having their mouth ripped open. Huge props to the artists Pete Woods (Robin, Action Comics) and everyone else involved because the creepy tone that this art provides really accompanies the story very well! There has been a lot of buzz surrounding the current Absolute Carnage run and how insane it is. This comic has sold me. I will be grabbing the next issue of Absolute Carnage (and catching up on the ones I have missed). 4.5/5 Symbiotic Hosts.

My boi Constantine’s back, bloodied and just as much the bastard he’s always been, in this prelude to the DC Black Label relaunch of Hellblazer. Beginning near the end of an apocalyptic battle with Timothy Hunter, Constantine has just sacrificed his long-suffering brother-in-arms Chas to be a distraction, only to find himself mortally wounded AND conversing with an apparent future version of himself. It’s doom, gloom, and guilt…just the way Constantine knows how to do it. Finding himself in 2019, Constantine’s locked up in a psych hospital, and looking to reorient himself in a Great Britain he no longer recognizes.

Writer Simon Spurrier is a godsend to this character, and being part of the “more mature” DC Black Label line is the right choice for Constantine. If he isn’t cussing up a storm and drinking like a fish, it just doesn’t seem right (looking at you, Young Animal. As interesting as your Hellblazer title was…it was holding back SIGNIFICANTLY.) Spurrier’s got a way with handling Constantine’s bastard characteristics, and artist Marcio Takara makes some interesting stylistic choices, blending a few of the more recent incarnations of the Hellblazer line and making it something new (Constantine with a crew cut is certainly a new, interesting look). The tone’s right, the guilt’s right, and using Chas as a crucial emotional plot point is a wise choice. As someone who absolutely LOVES everything Constantine (perhaps my second-favorite fictional character ever, in any medium), I am digging this: story, art, character, plot, everything is clicking. Black Label just got itself a regular buyer. Oh, and MAJOR PROPS for Spurrier and Takara for making the Keanu Reeves Constantine absolutely canon in this issue. 5/5 Bibles.

From the pages of Sideways, comes the entity Tempus Fuginaut, who claims to be more active than Marvel’s Watcher, Uatu and flaps his gums like a Monitor. We’re getting a Detective Comics “What If” which may or may not actually impact the DCU. I mean the Batman Who Laughs comes from this Darkness engulfing the DCU’s Multiverse.

I’m feeling this is more Snydery than Morrisonesque. I would like to see a bat-winged eyeball take on the Fuginaut or bite off one of those gears in Temp’s forehead or have him walk into a Grinning Dark reality infecting tenement building. It parallels Marvels what if series with time freezing monologues by the DC Watcher Temp and the “so so” art. The story really plays off the 92/93 mentality that came when Cable and the Punisher were offing their foes as Lois takes a blunt approach to solving her world’s problems after inheriting Kryptonian abilities. 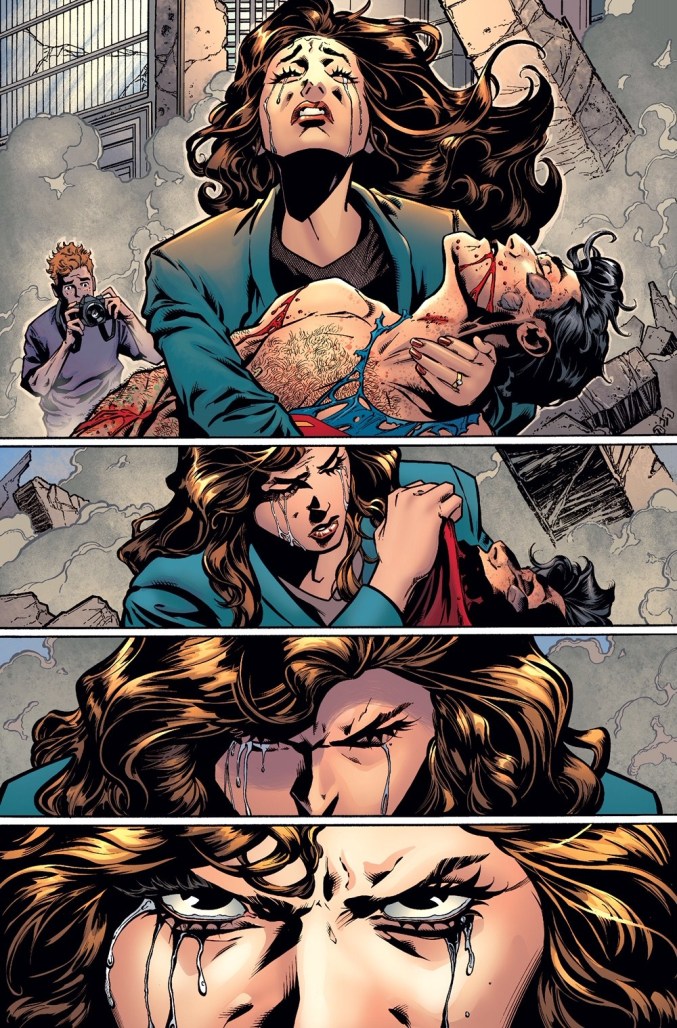 Being a fan of Phil Jimenez’s series, Superwoman, I find this take on Lois’s emotions pretty base. We’ve seen Lois with powers and she’s a lot more composed than this version. It’s just that with this story, I can see some dude saying , “yeah bitches is crazy!” It reverberates of “this is why a woman can’t be president”.

The art resembles the ridiculousness of this mentality and reminds us to chill because it’s not that serious and we may not have to see this “crazy bitch” again. I think it’s an insult to Lois. The name of the Sideways Watcher made me laugh because it was a play off of “Time Flies” Tempus Fugit when the book really dragged. In the end, I could see this being written in the 90’s Married With Children era and it was nostalgic but not clever. 2/5 Bibles.