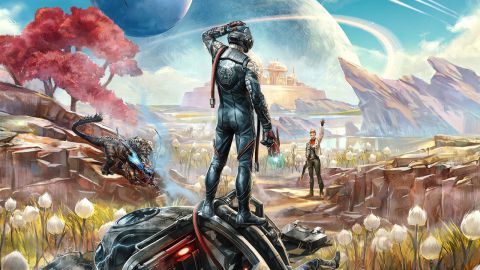 Some gamers are Fallout fans who were really let down that Fallout 76 was a multiplayer game and not a very good one at that. Then, here, Obsidian Entertainment comes slipping through the Fallout 76 kerfuffle and saying “Hey, look at me. Remember the small team that worked on Fallout: New Vegas? I got you. Hold my beer” (Spacer’s Choice brand). The Outer Worlds is the game that will scratch that Fallout itch…

You start The Outer Worlds creating your character which has a limited amount of cosmetic customization. This isn’t too much of an issue because you’ll barely see your character as the view’s in first person. Thankfully, what lacks in character creation is made up for in character build (attributes, skills, flaws and perks). In the beginning, you have six attribute points to put toward your character and you can’t change this once you’re done. You must choose wisely into the following attributes:

Each time you level up, you earn 10 skill points that you can pour into a variety of skills:

Perks can be earned from leveling up or from choosing to take on a flaw. For example, if you take a lot of plasma damage in combat, you’ll be given the option to keep a flaw that has a permanent increase in the amount of plasma damage enemies inflict on your character. Why would you do that? Well, that’s because if you keep the flaw you’ll be given an extra perk point.

While the overall gameplay is good, The Outer Worlds weakest point is the combat as it’s slow and clunky. The best comparisons I can make is to Bethesda titles like Skyrim and Fallout, with some sprinkles of Dishonored if you use stealth. You can fight stealthily by crouching and attacking with a melee weapon (hammer, sword, scythe, toss ball stick) for an initial damage bonus or guns blazing with long ranged weapons (pistols, assault rifles, LMG). Yet your strongest weapon is the gift of the gab with persuasion and intimidation statistics.

Weapons can be crafted to deal corrosive, plasma, N-ray, or shock damage. There’s a handful of mods you’ll find and weapons lose durability over time so you’ll be spending a good amount of time at your workbench. If you explore the world enough, you can find up to five science weapons that attack enemies in quirky ways such as the Shrink Ray that literally shrinks enemies. Overall, the combat is okay but not where the The Outer Worlds shines.

If you’re playing on hard difficulty or below, you’ll likely find yourself hoarding a bunch of consumables that just sit in your inventory or in The Unreliable ships (hub) lockers. These items aren’t useless if you’re playing on Supernova difficulty where you’ll need to eat, sleep, and drink. I think Supernova is the way The Outer Worlds is intended to be played but you’ll still have a great experience on any other challenge level.

When I crash landed in the first region called Emerald Vale, on the planet Terra 2, I was faced with the decision to heal a wounded man with a medication that was forbidden to administer. I didn’t understand why at first but as I progressed, I learned that this world is overcome by capitalism and feuds between corporations. That injured man couldn’t be healed with a medicine that wasn’t produced by Spacers Choice. Sick citizens couldn’t be given medicine unless they had a job and worked hard because medicine was limited so only the “worthy” could be healed.

Within this world, I was faced to make many morally ambiguous decisions and decisions that would benefit some people, to the demise of others. Your decisions do have an impact on the game and you don’t have to wait until the end to see the outcome. The Outer Worlds takes me, someone who was frozen for years, and places me in a situation where I need to learn about the world around me and navigate it using my personal morals.

There are few games with long dialogue that I want to sit through and exhaust. This is because the voice acting is outstanding and there was not one character I spoke to that felt like a waste of time. Every core character and random NPC had something so say or inform about the world around me. I even found myself eavesdropping on conversations between NPC’s that didn’t have a name and were simply called “Corporate Technician” or something like that. I wanted to hear their perspective on the world. A stand out example is two workers in Edgewater having a discussion in front of a hub where they were trying to find the good in Marauders who are universally known to be bad people.

Marauders are people you can’t negotiate with and they’re always hostile (represented by a red bar on top of their heads). This NPC questioned how true that can be if they’re working together, surviving without jobs and without a colony. This kind of world building through dialogue, notes, and environment is where The Outer Words excels.

This world isn’t a large or quintessential open world. Instead, there’s smaller, more contained worlds that each have a healthy amount to explore without feeling overwhelming. Obisidan didn’t fall into the open world trap where there’s endless exploration and redundant quest objectives. Every mission has a purpose and will effect how you approach another mission. The world is so connected that a typical open world setting would take away from that and make each side activity feel like extra fluff instead of relevant.

You can finish the main quest in maybe 15-hours, but I genuinely feel you’re doing yourself a disservice by not exploring, doing side content, and talking to NPC’s. The world is contained enough to support that exploration and nothing is too far away. The game gives you back what you put in, so if you rush to the end, you’ll surely miss out.

When I crash landed into Emerald Vale, I was instantly taken away by the beauty of the region. When I looked up into the horizon I could see other planets, colorful skies, and an Arora Borealis. I found myself taking many screenshots despite the game not being graphically impressive. Textures were inconsistent and they often took time loading in. Not all of the planets are as pretty such as Monarch where the colors were too high in contrast. Every planet is distinctive. Some of the environments were very reminiscent of No Man’s Sky after its day one patch. Simple, but pretty.

A quick note about the music is I had to lower it in my sound settings. It’s not that the music was bad but the sound was so impressionable that it etched itself into my brain and left an ominous, war story like sound playing over and over again while I was trying to sleep. This was mostly apparent in Emerald Vale but still worth noting how the music choice left it’s mark on my experience. I can hear it now…

Obsidian Entertainment set the bar high for Fallout games, despite not being a Fallout game. The Outer Worlds has spoiled me with a contained world where every activity, note, and conversation builds upon it. Very few games foster a space where I want to hear every dialogue choice, explore every story option, complete every side mission, read every message, and listen on random conversations. Even the loading screens were advertisements for the different corporations products! The Outer Worlds is a great experience and will be a special treat for Fallout fans. 4.5/5 Bibles.