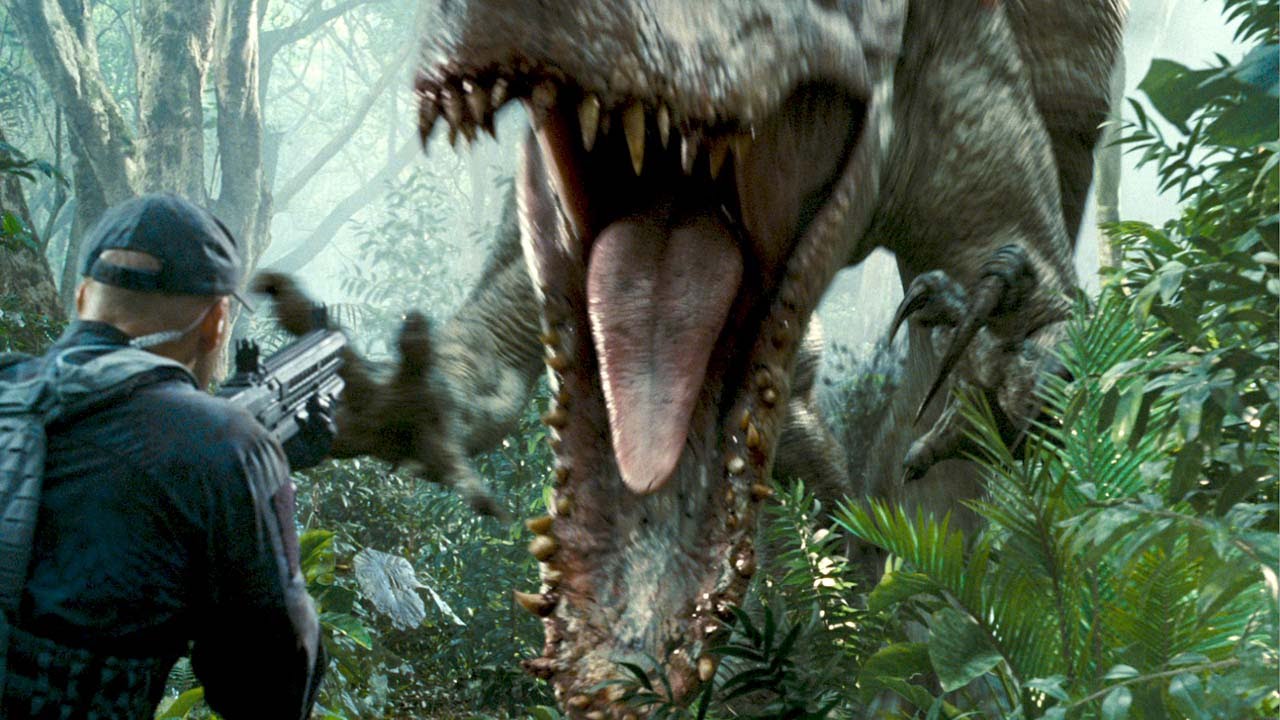 I’m not going to go into just how much Jurassic Park means to me because it means something different to everyone. For some, it was a testament to what could be achieved in the 20th Century of film technology. Others saw it as a reason to explore Paleontology as a career. And business women and men at Universal Studios saw it as a money-making opportunity because they practically own the market on dinosaurs in film.

Jurassic World stars Chris Pratt (Guardians of the Galaxy…) and Bryce Dallas Howard (Spider-Man 3!!!) and a couple of kids as they roam through, what is essentially, yet another attraction for Universal. After the colossal travesty and loss of life that took place at Isla Nublar at the original Jurassic Park, Jurassic World opens with relatively the same amount of security there was at the first park. And what boggles my mind is that while Jurassic Park was a test site for a theoretical theme park attraction, Jurassic World – being on the same island with the same creatures – still has the same problems.

Oh did I not tell you enough times that Jurassic Park and Jurassic World take place on the same island yet?

That’s okay because the film goes out of its way to remind the audience time and time again that the original film exists and that you can’t compare to the first time you saw the dinosaurs. A character actually takes the time to say this early in the film. Later in the film, the two boys, played by Ty Simpkins (Insidious) and Nick Robinson (The Kings of Summer), literally wander onto Jurassic Park’s old film set and they play with the props. Had it not been for the IMAX 3D glasses on my face –- and the fact that I had more movie to go –- I would’ve smacked my face in disbelief.

What’s Jurassic World like? How’re the actual exhibits of CG monsters? Surprisingly interesting as the geneticists haven’t been out of work since the first film. There’s a wonderful CG learning exhibit for the little kids as they press little displays and learn about dinosaurs. There’s petting zoos and children rides with little CG Brontosauruses and CG Triceratops. And we’ve all seen that CG Mesosaurus SeaWorld Jump which featured even more children. Slowly but surely, I began to realize the demographic that Jurassic World was being aimed at.

But the actual meat and potatoes of Jurassic World comes in the shape of genetic hybrid dinosaur that is bigger and badder than all the other dinosaurs in the park. This is meant to raise awareness and ticket sales of a DINOSAUR EXHIBIT and make LIVABLE, BREATHING DINOSAURS from 65-million years ago exciting again.

The Indominus (please stop laughing) Rex is the super-intelligent monster running amuck in Jurassic World and seems to get a new superpower in each act of the film because it’s a genetic hodge-podge from different pre-existing species of creatures. I’m not going to spoil what those are because there are some effective twists in the film that pertain to those abilities. These are the highlights of Jurassic World. Watching this creature maim and murder –- with some stunning cinematography –- is appealing and will get any fossilized Jurassic heart beating.

Dinosaurs are a small part of the Jurassic equation, however, as the human characters don’t make the scenario at all legitimate or believable. You have two kids, one basically being Timmy from Jurassic Park, and the other, a lady’s man in high school being taken care of by an Aunt that outsources her responsibilities to her assistant. Pratt is the most interesting mostly due to the fact that he wants nothing to do with anyone but Howard and mostly just tends to his trained raptors. I think we can all agree, Chris Pratt has his priorities in order.

None of the adult characters change convincingly over the course of the film, while the boys dealing with their parent’s divorce gets picked up and dropped immediately –- in the same scene, mind you — once the Indominus Rex comes into play.

The general slog will eventually lead you to third act, which will be a love it or hate it moment. The ten-year old in me was screaming and praising the last few moments of the film while the 24-year old film critic was stewing in his seat wondering exactly which of the focus groups Universal hired came up with this. This is THAT third act that will be around the Internet forever and talked about as being the most awesome thing put on a silver screen. It’s bombastic, eruptive and frankly I just wanted the noise to stop.

Jurassic World is a great film to take the kids to see and makes for an entertaining blockbuster film and anyone else will get their money’s worth if you want to see dinosaurs. But this is no Sermonizer’s Jurassic Park. It has the dinosaurs but none of the heart. It has the sizzle but none of the steak. It’s a cold, lifeless film that has one purpose and one audience in mind and that saddens me. I haven’t felt this way about a film taking advantage of my nostalgia since 2014’s The Amazing Spider-Man 2.