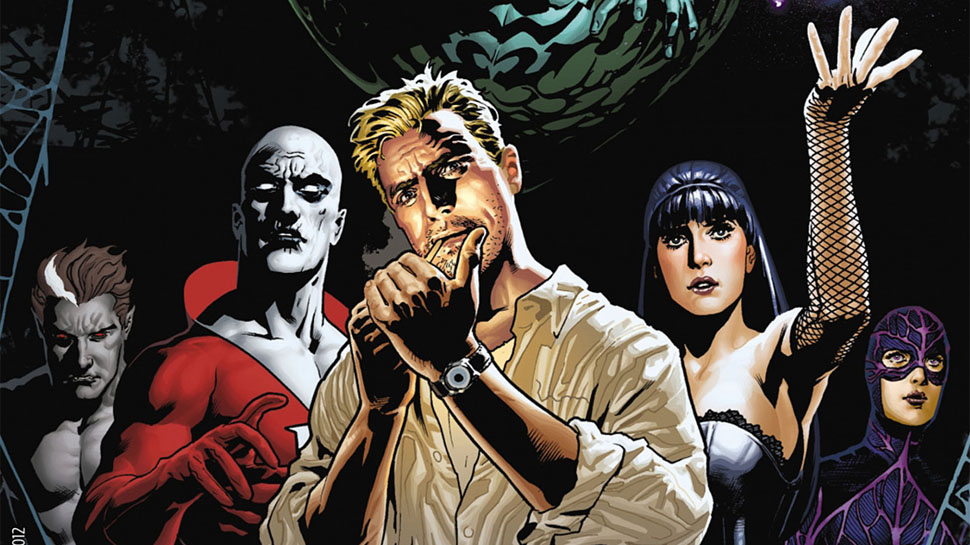 James Tynion IV seems to do no wrong, and he proves it once again (with caveats!) with this new iteration of Justice League Dark.  Featuring the magical, mystical side of the DC universe, we start off with Wonder Woman trying to gather together a new JLD to counter an enigmatic new threat. From the first scene –wherein Zatanna’s spells backfire on her, unleashing themselves on an unsuspecting crowd — to the return of Detective Chimp (of who, truth  be told, I cannot get enough), and the sheer ludicrousness of Man-Bat walking around with a human body and giant bat head, this issue is a blast (and any excuse to read even a single panel of my favorite fictional character, Constantine, immediately makes my monthly pull-list).

Aside from the usual magical hijinks, this issue allows a lot of room for the characters to breathe. Still reeling from the events of the Dark Nights Metal crossover, Wonder Woman and Detective Chimp get pensive, and allow some introspection…something I wasn’t quite expecting in a first issue. Another pleasant surprise was the full-on body horror in the latter half of the issue, with Dr. Kirk Langstrom performing autopsies on some horribly disfigured corpses…only for them to reanimate themselves. The art by Raul Fernandez, and Alvaro Martinez, really comes into its own here: prior to this sequence there was little to stick out, but my God, can they ramp up the horror when the story needs. 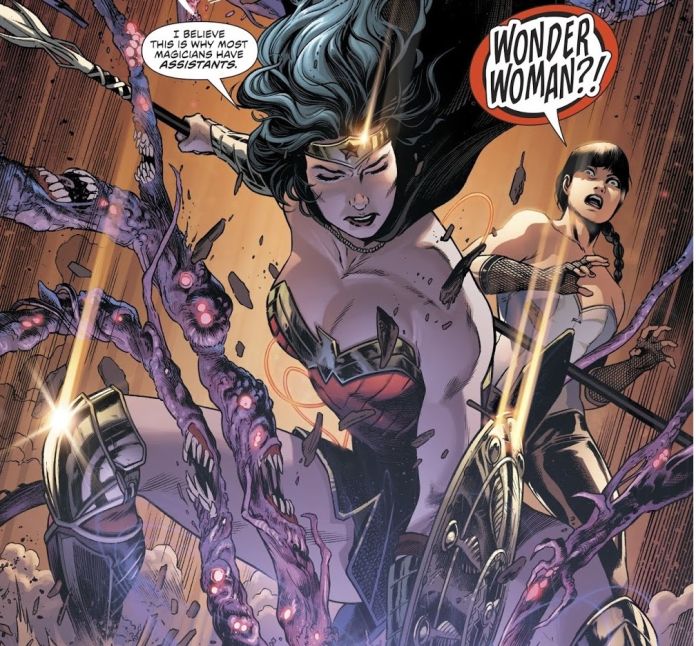 On the flipside, the usually reliable Tynion seems to be retreading a plotline that I’d read about 2 years ago in the pages of Doctor Strange: some mysterious force is threatening to wipe out the forces, and practitioners, of magic (thus prompting the reformation of the JLD). Hopefully –and most likely– Tynion has got something else up his sleeve, but even though the smaller character moments are delightful, the overarching story…if it is what it seems to be…will be a road well trodden. Hopefully next issue will provide a better, clearer picture of where we’re going with this. 3.75/5 Bibles.

After being proverbially duped with the “wedding of the century” i nthe form of the Colossus/Kitty Pryde wedding, we did get another wedding we’ve been waiting for… the wedding of Gambit and Rogue!  While it wasn’t the wedding we were looking for, it was a nice little fake out. Writer Kelly Thompson does a fantastic job with the characters; she makes you really feel the love between the two characters.The ending to the issue raises a few eyebrows, but will it be enough to keep readers around?… that’s another question entirely.

The art by Oscar Bazaldua and Frank D’armata is really, really well-done. Bazaldua has a Jim Chueng quality to his artwork: it’s crisp and clear, and D’armata’s coloring is just as vibrant. Whether or not this series last will really lean on Thompson’s writing. She can do it, let’s just see if people cling on. But she did get the sour taste of misdirection out of my mouth. Hopefully the follow-up issues will even out what little unpleasantness that fake-out rendered…and hopefully, again, some of the readers will stick it out long enough to see this arc through to the end. 3.5/5 Bibles

What happens when you make Damien Wayne the new leader of Teen Titans? Teen Titans Go! Dark Edition! Seriously, who thought it was ok to ever put this kid in a Robin costume?! Damien decides he wants to reassemble the Teen Titans, but in a different way: mostly just ignoring anything the adults have to say and doing his own thing. He isn’t even telling Batman that he made this team. Damien is tired of waiting for the bad guys to make the first move, and knows Daddy won’t approve of his new methods. His team isn’t exactly the family friendly edition we’re used to, either. We get Red Arrow (the ex-assassin), Crush (Lobo’s daughter), Djinn (a 4,000 year old genie), Kid Flash, and newbie to it all, Roundhouse. This issue is mostly Damien going around convincing everyone to join him and fighting Brother Blood.

There’s lots of action and a little humor in Adam Glass‘s writing.  I really enjoy the way Bernard Chang (artist) and Marcelo Maiolo (colorist) use an old tube TV look for the flashbacks of Damien gathering his team. I really can’t wait to find out how the Bat’s and Superman take it when they find out Robin is taking the Titans in a darker, grittier direction! 5/5 Bibles

Give you the eternal life of the vampyre

Make you my unliving wife

While Dante’s gotcha dopeslitz packin’, his boy Brae’s out witda Bone Collectin’ Crew, diggin’ up more Ashy Larrys for Dr. Brigitte to Frankenskeet with, down in her lab below Lady Grace’s family compound. Big Andre, witda demon-eyed cornrows, carries round his diabolical musclemadness in the backshadows ready to strike, just so long as Lady Grace keeps breathin’ in tha corpse dustbin to keep him corporeal…

Lady Grace and her Children wanna maintain their gravedust bizness in tha family way, but city-slickified-three-piece-shyster Mr. Lamont and his back-east-coast Big Pharma Thug associates, have other plans for drawing-and-quartering up those marketplacecardholdings…

With Infinity War still fresh in readers minds, Marvel launches their next big story with Infinity Wars Prime. If you’re an avid reader like myself than you’ve painstakingly drudged through the slop that has been the Infinity Countdown stories. Except for a few noteworthy passes of literature, the storyline so far has went from bad to absurd, and that continues with Prime. Besides one surprising moment at the end of the issue, when newly minted super villain Requiem picks up where Chris Hemsworth lacked, this Prime’d issue could of fallen with the Countdown wastes.

Gerry Duggan’s work on this issue is somewhat helped by his use of the Mad Titans narration throughout the end of the issue. The writer had the legendary villain narrate his own final words and has him critique his own death. If only more of the issue was written as well. As we all know, this death won’t last longer than a Spider-Man story arc! But Dugan still packs a punch allowing Requiem to make his or her mark in the MU! Who is Requiem though? This may be the only reason to continue reading Marvels new Big storyline. 2.5/5 According to James Gunn. 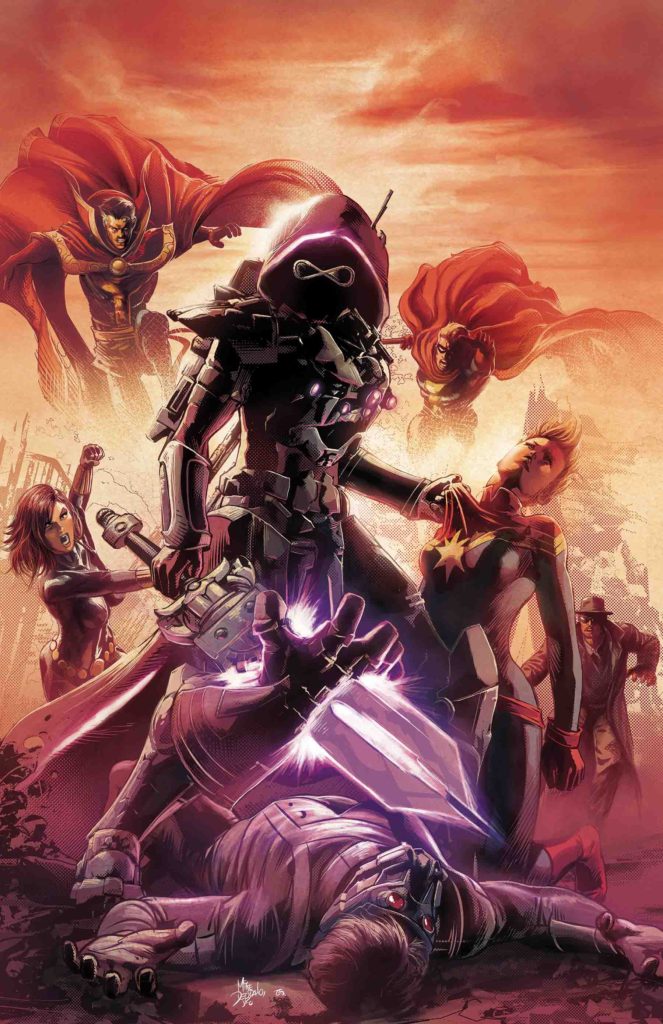 Of course, there is more to this issue than Thanos’ death. Loki is convinced that he’s being pranked on a cosmic level. He learns that he must go to the God Quarry to unravel the mystery. This narrative thread could still become quite entertaining. But it paled in comparison to the impact of Thanos’ death.

Infinity Wars #1 drops on August 1, so readers won’t have to wait long to gain a clearer understanding of where Marvel’s next big cosmic adventure is going.