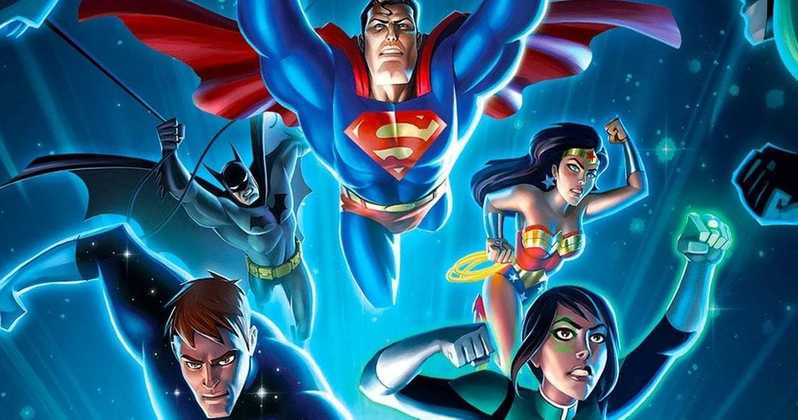 Justice League vs. The Fatal Five takes us back to the Bruce Timm-produced Justice League animated series. Reuniting with Alan Burnett and director Sam Liu, we’re introduced to a new chapter of this particular universe along with new characters like Miss Martian, a new Green Lantern, and Starboy from the Legion of Superheroes…

Battling across time, Starboy (Elyes Gabel) follows the remnants of the Fatal Five on a journey into the past to retrieve the final two members of their group. Timm and his team reintroduce the Legion of Superheroes in the time of the Justice League where the stakes are high, but the emotional stakes are played on a smaller scale. The Legion’s characters and their rogues are on the more obscure side of the Daily Planet; but, if this is a viewer’s first foray into the 31st century of the DC universe, it’s a good place to start.

Spearheading this story is new Green Lantern, Jessica Cruz (Diane Guerrero), a newly appointed hero who doesn’t want to be one, and Starboy, a hero fighting his mind to remain as such. While the battle is in the forefront, the backdrop revolves around the trauma and mental illnesses of our two leads and contributes to their decisions without using it as a crutch to define them. Cruz suffers from anxiety and PTSD. Thomas Kallor, a.k.a. Starboy, is forced to battle his own mind for stability. Also, Miss Martian’s (Daniella Bobadilla) performance is being overseen by Batman as a potential League member in training. Batman’s judgement is, of course harsh, but provides levity and humor.

At one point, these four characters journey into Thomas’s mind to see what he knows about the Fatal Five to learn what their goal is. Retrieving the remaining two members of the Five and how they intend to do it. Once Emerald Empress (Sumalee Montano) is released she makes for a bold ploy to end past world’s heroes to ensure no one would be present to oppose them when they return to the future.

The returning voices of Kevin Conroy, George Newbern, and Susan Eisenberg as Batman, Superman, and Wonder Woman respectively were just the icing on the cake and didn’t overshadow the new characters. Liu’s direction, along with the design of the previous JL cartoon, marks a wonderfully executed entry that feels like a great continuation of a much beloved series. JLvTFF also brings forward worthy, dangerous new adversaries while remaining balanced in the introduction to our young heroes. The ginger handling of mental illnesses alongside the fantastical action makes this movie a must-see. 4/5 Bibles.