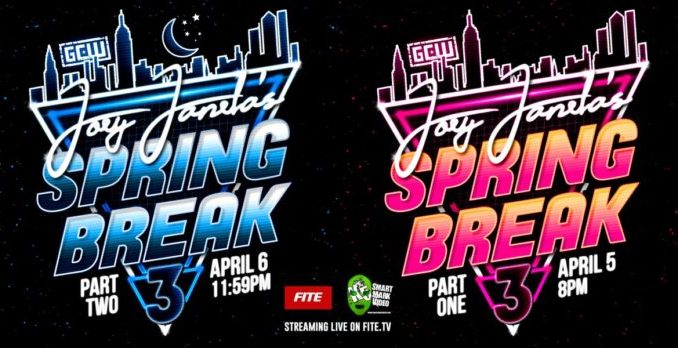 – Joey Janela vs. Marko Stunt – Great booking with both guys coming off horrific injuries last fall. This was everything batshit crazy you’d expect with insane dives, package piledrivers, and even a spot where both guys crowd-surfed and exchanged chops. Fun match, fun crowd, fun start. – 3.5/5 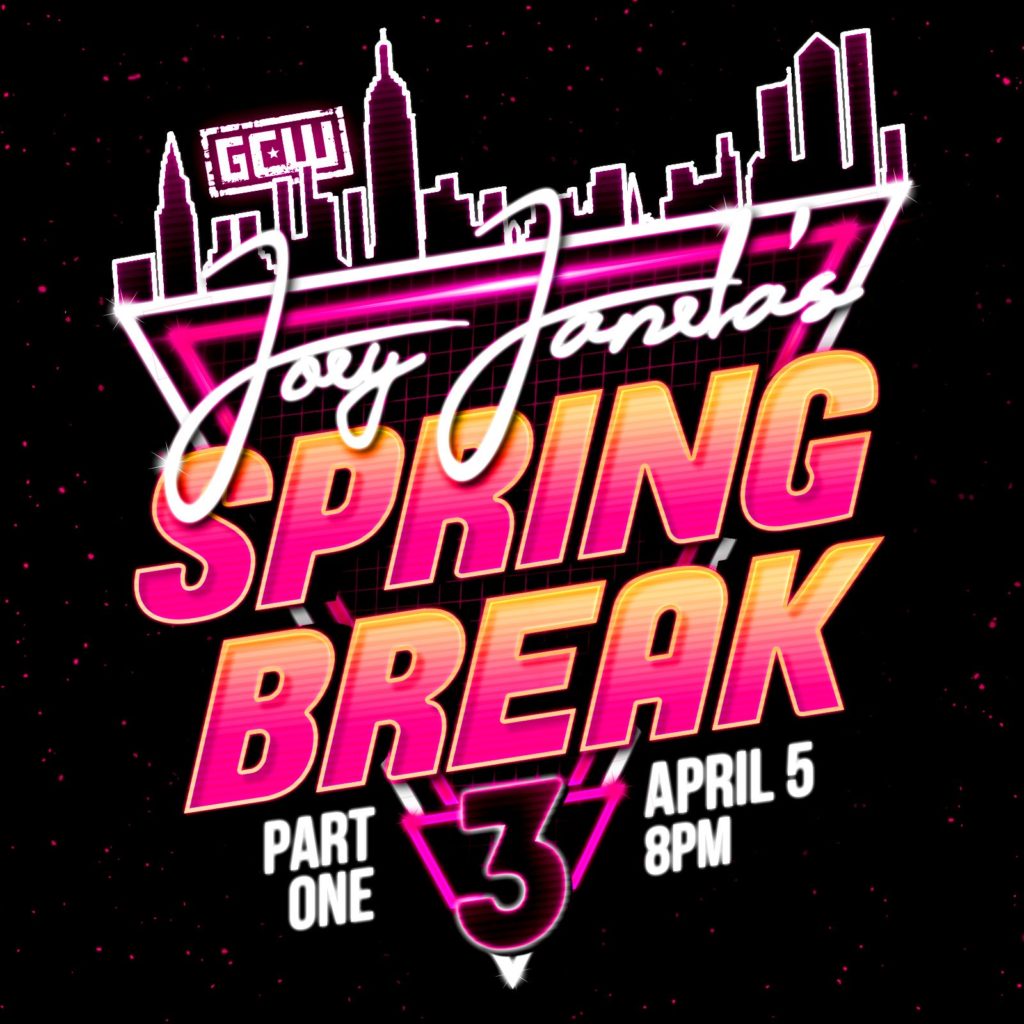 – Tony Deppen vs. No Legs – The now infamous “no legs” match! If you haven’t heard about this already, where the fuck have you been? The angle was brilliant: Tony bullies a wheelchair bound fan who subsequently fights back and they have a match! Better, this “No Legs” (later not-revealed as Dustin Thomas) is AMAZING. He hit Deppen with everything he can possibly spring, including a 6-1-MOTHAFUCKIN-9 and SPRINGBOARD 450 to a false finish!! And Tony can’t hook the.. *cough* for the pinfall. This match was better than sex. – 10/5 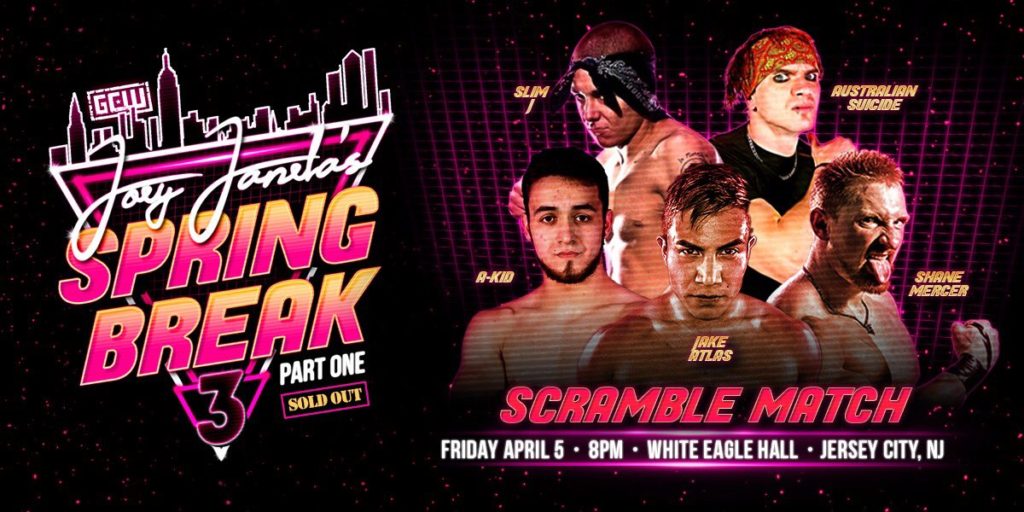 – Spring Break Scramble: Jake Atlas vs. A-Kid vs. Australian Suicide vs. Slim J vs. Shane Mercer vs. Jungle Boy – Wild spotfest with lots of creativity. A-Kid is awesome and the power guys Atlas and Mercer blend in well. Aussie Suicide is one to watch and Jake Atlas has severely improved over the past year. This was also a nice victory for Jungle Boy who you just know dedicated his Mania Weekend to the proud papa in the sky. I loved it. – 3.75/5 – GCW Heavyweight Championship: Nick Gage vs. Shinjiro Otani – You’d thing these two would have a bigger bloodbath. Instead, it rivaled Batista/HHH in the plodding hardcore variety. While it didn’t go 25-minutes, it sure felt like it; I wound up liking that marathon yawn even more. This had a terrible, cheap finish, too. – 2/5 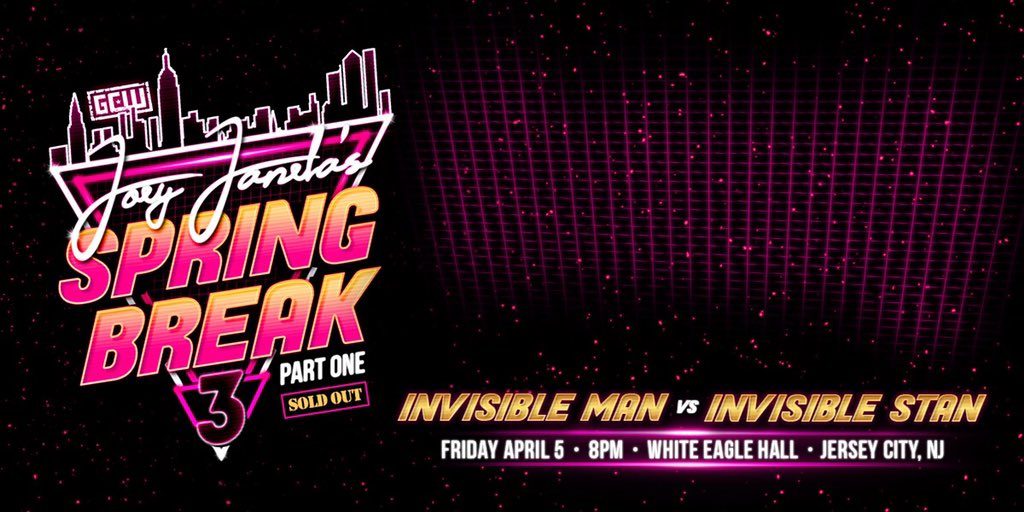 – Invisible Man vs. Invisible Stan – This was also John Cena’s initial appearance this Mania weekend before bringing back the Doctor of Thuganomics. Kudos to referee Bryce Remsberg for some solid improv, as this shindig had it all: table spots, ref bumps, false finishes, and an insane balcony spot. Man and Stan are serious workers and deserve every dollar these gracious yet gloriously drunken fans tossed in that ring! – 10/5 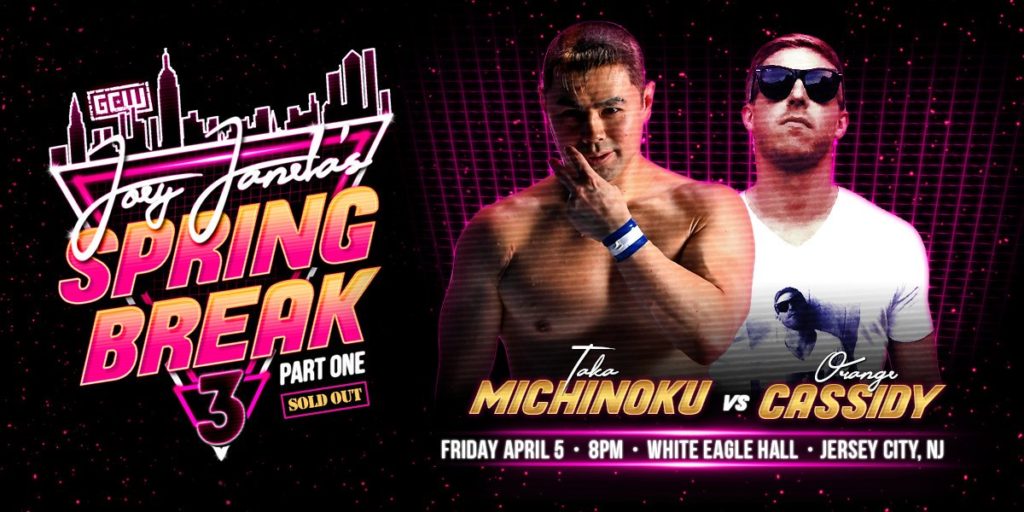 – Taka Michinoku vs. Orange Cassidy – Orange Cassidy was this weekend’s breakout star and continued his excellence against the Japanese cruiserweight/junior heavyweight legend in a bit of “soft style”. Once Taka hurt his hand on Cassidy’s eye apparel, the match went freshly squeezed. A Michinoku Driver completes the dream match tease. – 3/5 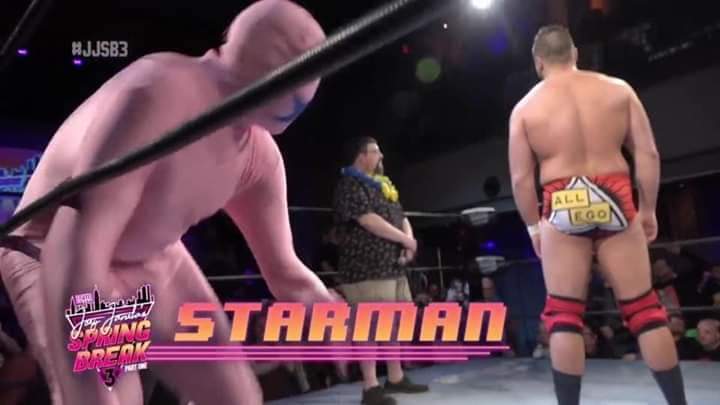 – Ethan Page vs. ???? – BAH GAWD IT’S STARMAN! STARMAN! STARMAN! Yes, Nintendo Entertainment System Pro Wrestling‘s Starman schoolboys Page from behind and gets the squash victory. But we’re not done. Starman takes about 12-minutes to take off the mask to reveal himself, and it’s none other than… 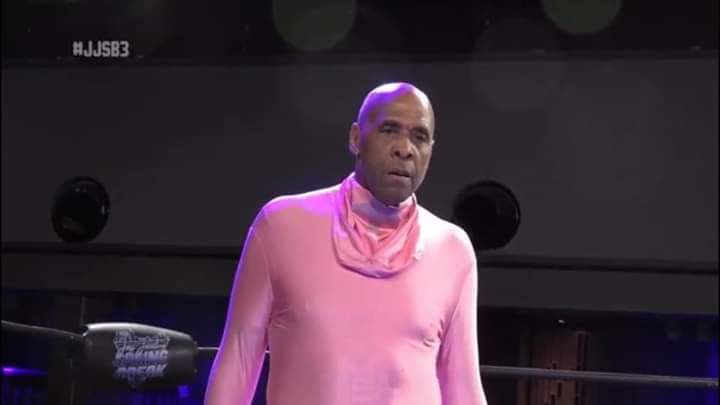 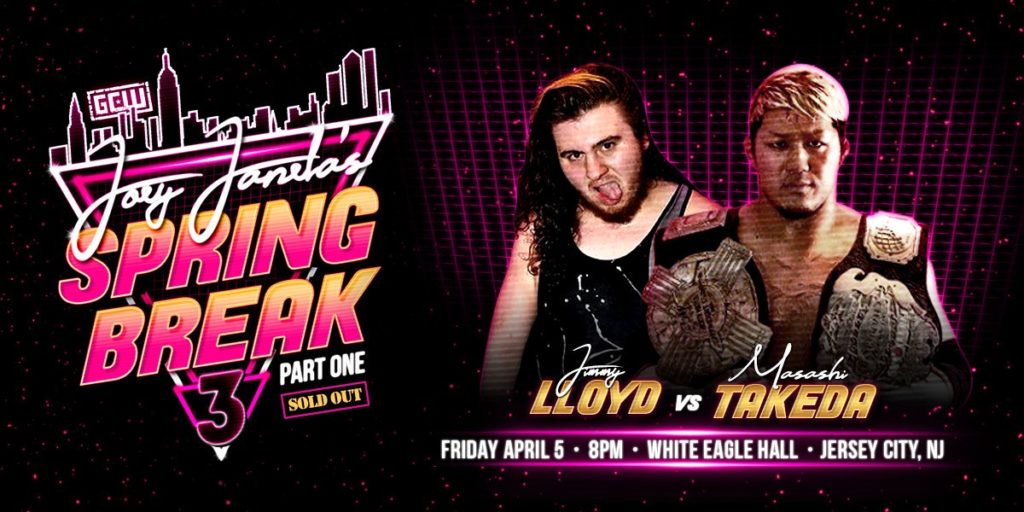 – Anything Goes: Jimmy Lloyd vs. Masashi Takeda – I watched this on the airplane ride home. Thankfully the person seated next to me was a fairly cute young European girl who was asleep the entire time. And if awake, she likely would have asked why Lloyd and Takeda weren’t using more weapons to kill each other anyway. The only thing running through my mind was how the fuck these people survived all those shattered light tubes and splattered blood sitting in the front.. or second third fourth or whatever rows? Mortal Kombat 11 fatalities have nothing on this match, one that saw Lloyd pull scizzors from his neck and pins from his other extremities! I don’t normally do death matches, but this was awesome. – 4/5

While I haven’t seen everything yet, GCW came up with the 2nd or 3rd best show all of Mania Weekend. That all depends on three factors: 1.) How much you hold ROH’s mediocrity against NJPW from G1 Supercard, 2.) How much gaga you can take and appreciate in your wrestling, 3.) How much you’re willing to enjoy and appreciate a great Death Match. For many, that’s going to be a tough pill to swallow. But for geeks in New Jersey last Friday night and marks like me in need of something fresh and unique, Spring Break 3 was just the vaca needed– a most triumphant Mania Weekend classic. 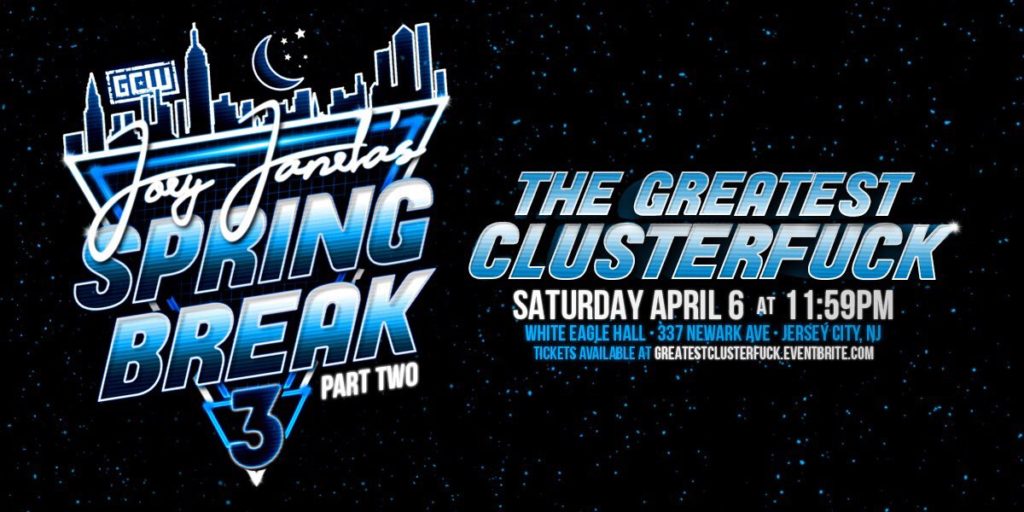 -Joey Janela vs. Jungle Boy – More great booking from Janela, who had a firestarter last night with Stunt. This one also had more of the same grind: let’s see who can out-dive the other (p.s. which is probably Penelope Ford). And spotlighting Jungle Boy right off the rip and right off his win from the terrific scramble last night spoke volumes about Janela … that he’d still Death Valley Drive and Emerald Flow-son right through the fucking apron. This was a fun, crazy opener with Janela putting a young kid over again. – 3.25/5 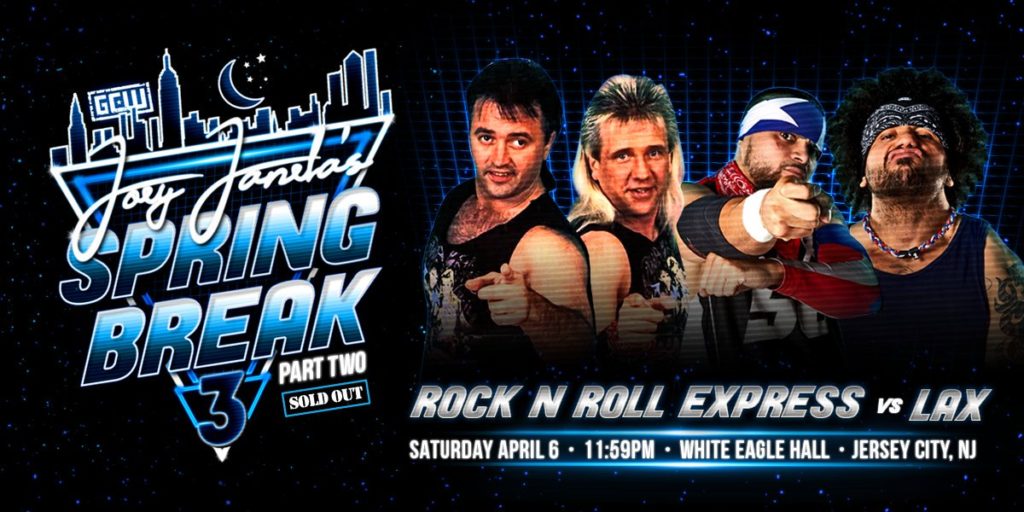 –LAX vs. Rock n’ Roll Express – Like Marty F’N Jannetty had in a match with Janela from the O.G. SB, RICKY FUCKIN’ MORTON HITS A CANADIAN DESTROYER!! And that’s all the motivation you need to seek this match out. – 3/5 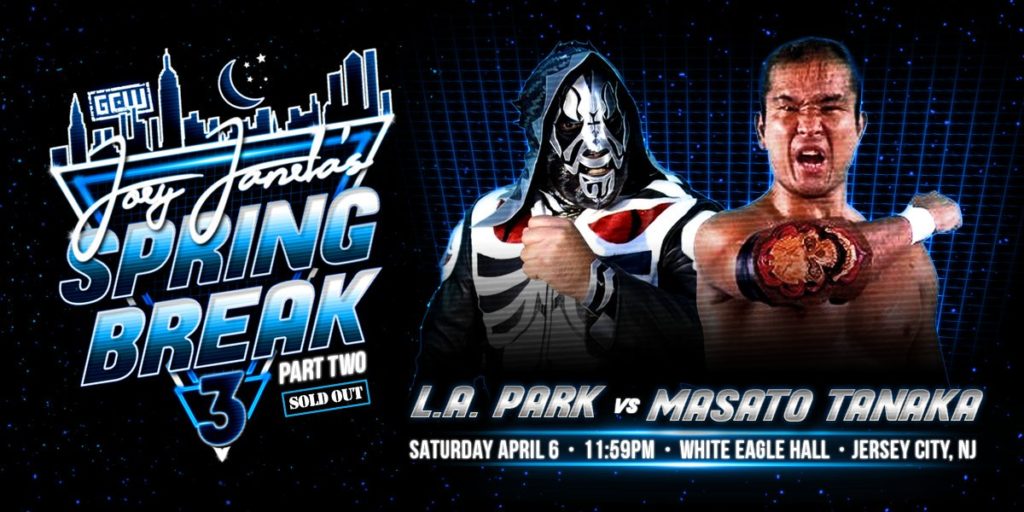 -Masato Tanaka vs. LA Park – A dream match between hardcore legends that lives up to the hype. At this point, this is a total mark-out show/pro wrestling series; Spring Break is all about pleasing the crowd by any means necessary and this zero fucks given match-up was evident of just that. Broken chairs, exploding doors, busted beer cans, and zero-selling wrestlers = happy fans. – 3.5-3.75/5 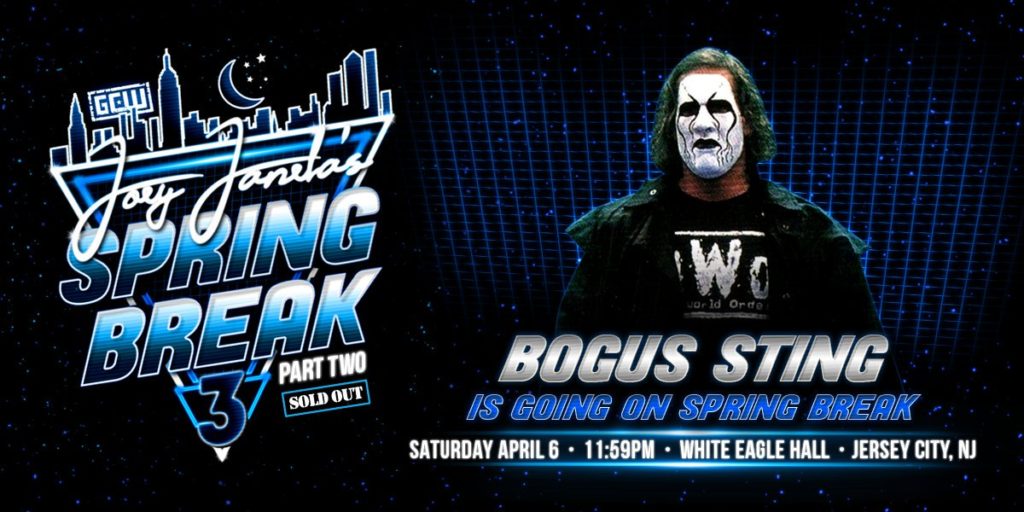 –The Greatest Clusterfuck – This would take me an hour to analyze the clusterfuck that is my brain after the Mania Weekend that was — and this match — so here were just some of the lowlights:

While not as great as Part 1, Game Changer Wrestling presents Joey Janela’s Spring Break 3‘s second seXXXion was just as entertaining.. so long as you don’t mind a 6-hour battle royal in the middle of the night filled with death match dudes, low-name indie players, legends no one remembers and lots of angry women. In other words, it was incredible. I wish the event wasn’t scheduled for midnight in New Fuckin’ Jersey (and wound up delayed due to the late arriving Supercard crowd) on the morning of my flight (much like Part 1 was during TakeOver.. meh). I woulda loved to have been there, pissed fuckin’ drunk!