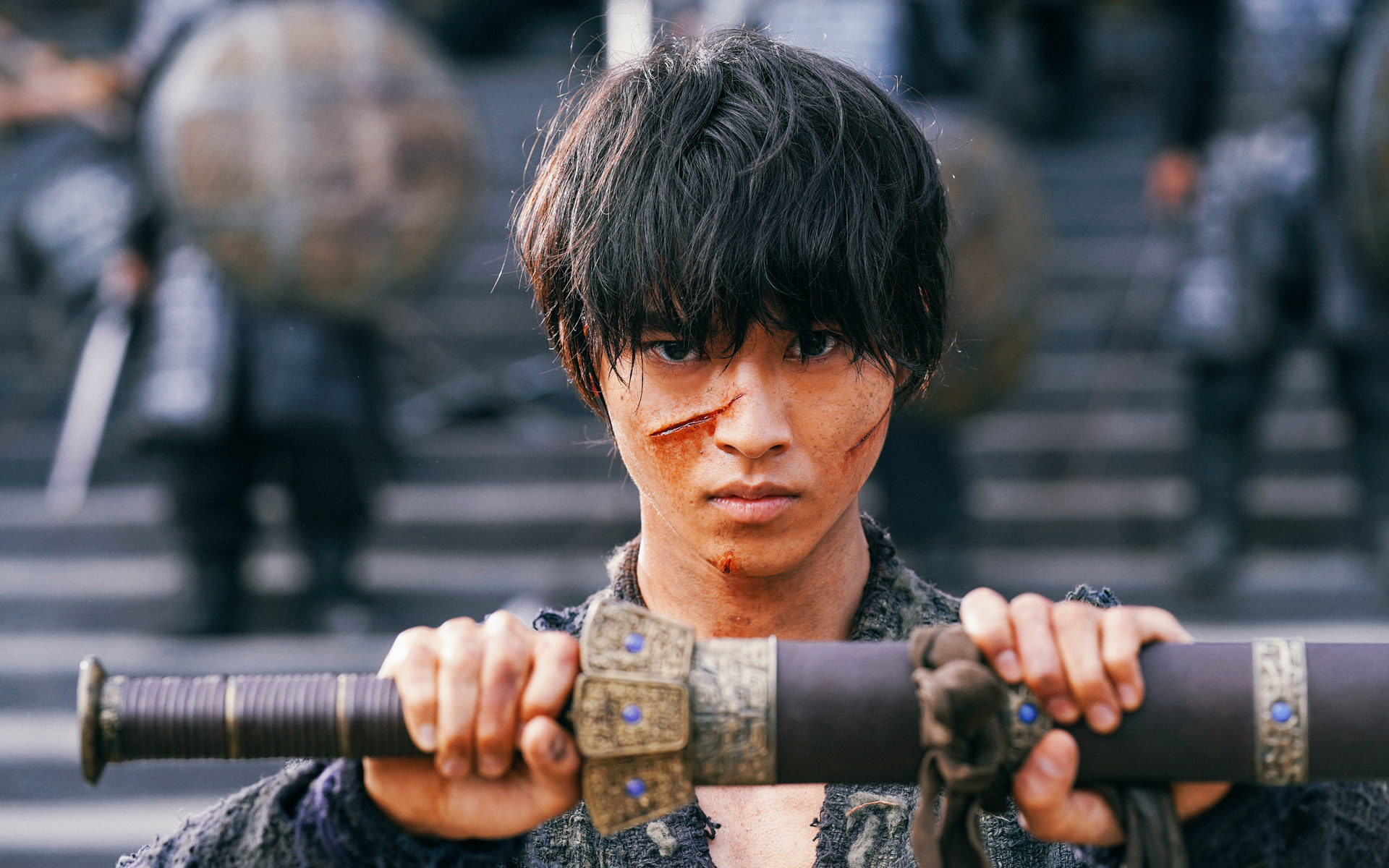 I haven’t read any of the 55 volumes (and counting) of Yasuhisa Hara’s Kingdom manga or watched any of the 77 episodes of the anime adapted by animation studio Pierrot (Bleach, Yu Yu Hakusho, and Tokyo Ghoul among many others)…

To make matters worse, I haven’t seen any of the films by director and co-screenwriter Shinsuke Sato (the two live-action Gantz films, Death Note: Light Up the New World, the live-action Bleach film for Netflix). I’m going into Kingdom completely blind and I have no idea if that makes the viewing experience any better or worse.

In 255 B.C., Kingdom revolves around the quick-tempered and charge-headfirst-into-battle-without-thinking Xin (Kento Yamazaki) that dreams of being the greatest general of the Qin Kingdom. There’s other shit going on; a bloody 500 year war between the seven states of China, Xin’s best friend Piao (Ryô Yoshizawa) being enlisted by the King only to turn around and be killed, and King Yin Zheng being a splitting image of Piao, but nothing is emphasized or screamed louder than Xin’s desire to become the greatest general China has ever known.

Kingdom feels like it’s about 45 minutes too long for its own good. The first hour seems to drag as blood spraying into the air every now and then isn’t enough to keep you fully intrigued. The manga is an exaggerated recounting of Zheng actually becoming king in 221 B.C. during the Warring States period and eventually unifying China while the characters are loosely based on actual historical figures. The action adventure film attempts to portray Xin and Piao as worthy and capable swordsman because they clunked stick swords together 10,000 times in an empty field throughout their childhood and teenage years.

The film tries to compensate for its slow first hour with a more eventful second half, but it doesn’t totally succeed. Yang Duan He (Masami Nagasawa) and her mountain tribe are pretty awesome. Their masks remind you of something straight out of Princess Mononoke and you’ll be trying your hardest not to compare Yang Duan He to Xena: Warrior Princess. There’s this competition for the throne that gets a little complicated. Zheng’s brother Cheng Jiao (Kanata Hongo) is nasty and heartless and basically a human version of Salacious Crumb sitting on an even more elaborate version of Jabba the Hutt’s dais. Zheng and Jiao have the same father, but different mothers; Jiao’s is of royal blood and Zheng’s is a dancer or, in other words, a commoner. Jiao viewed peasantry as being bone deep; it isn’t something that can ever go away.

The main theme of Kingdom sounds like a direct ripoff of the main Guardians of the Galaxy theme, which is kind of a mindfuck. The prosthetics and make-up effects in the film are questionable with Li Dian, the original slave owner of Xin and Piao, having this awkwardly orange colored face, inhumanly puffy cheeks, stringy facial hair, and the ugliest facial expressions imaginable. After Xin joins up with Zheng, a girl in a bushy owl costume named He Liao Diao (Kanna Hasimoto) is mostly only around to take everyone to the mountains later. The chemistry Xin, Zheng, and Diao have is reminiscent of what Mugen, Jin, and Foo have in Samurai Champloo. Another observation is that Xin is basically Goku with Vegeta’s short-fuse temper; he lives to fight and eat, he’s dumber than a bag of rocks, and he can’t identify a woman when she’s standing directly in front of him.

Cheng Jiao’s go-to henchman, former general and current hitman for hire Zuo Ci (Tak Sakaguchi) may be the film’s coolest badass. He doesn’t give a shit about anybody, tells Xin that all dreams are bullshit, and is a part of what is arguably the best action sequence in the film. Meanwhile, General Wang Yi (Takao Ohsawa), the most renowned general in all of China and the guy with the status Xin plans on taking in the future, is a bit overrated. He mostly just parades his weird and pointy facial hair around and swings his giant sword as if it won’t remind us of Guts from Berserk.

All in all, Kingdom is a decent action adventure that just takes a while to really get going. The performances aren’t totally satisfying with Kento Yamazaki hamming it up on more than occasion and taking the brainless dolt with a huge mouth thing to uncomfortable levels. The story isn’t exactly hard to follow, but it does feel like it’s trying to be more convoluted than it needs to be. You don’t feel any sort of attachment to any of the characters and any sort of twist can be seen long before the reveal. Kingdom is just an okay way to spend two hours that is probably a justifiable rental on a day when you have nothing better to do, but is not worth paying full price to own. 3/5 Stick-Envy Riddled Bibles.