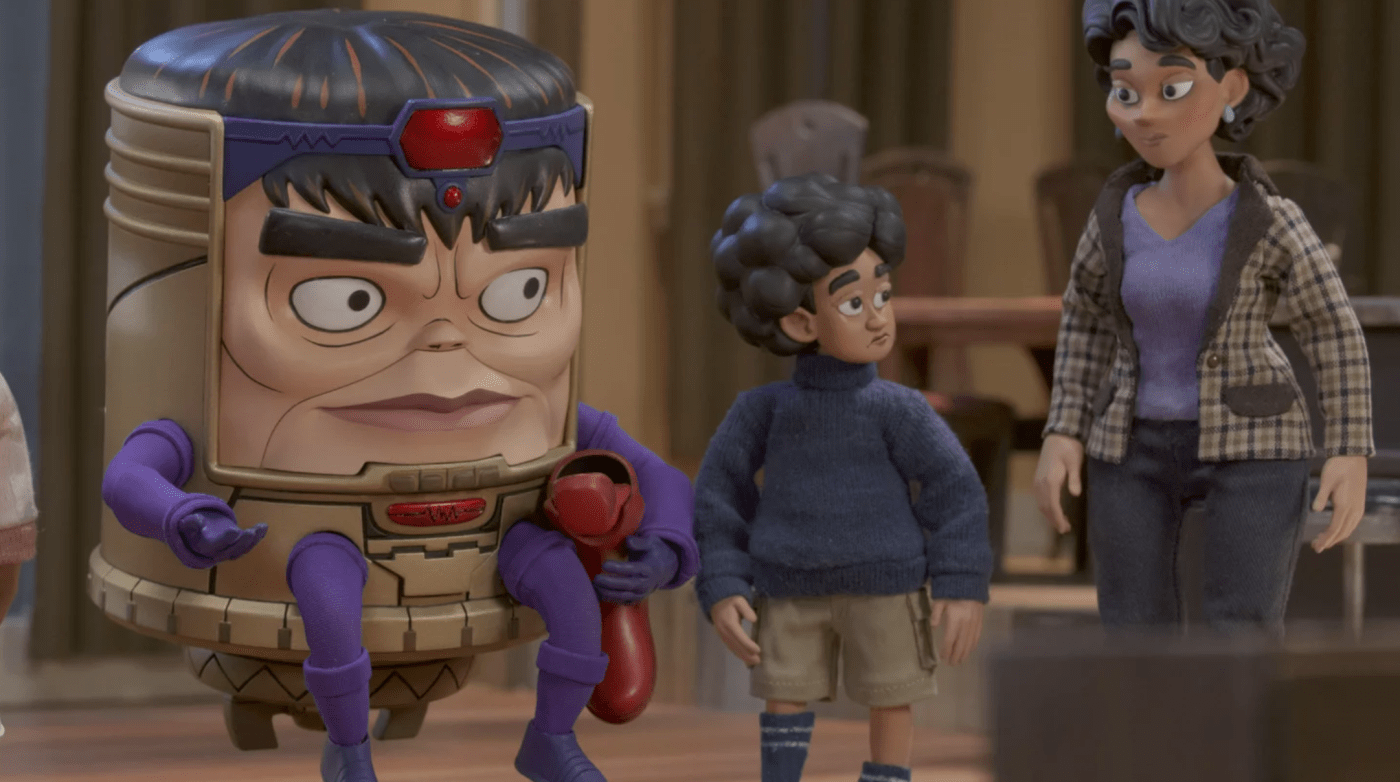 I think it’s safe to say that M.O.D.O.K. wasn’t dominating the favorite marvel character charts over the years, but that is about to change! M.O.D.O.K. stands for M.ental O.rganism D.esigned O.nly for K.illing, and is a creation of Advanced Idea Mechanics, an organization that M.O.D.O.K. himself takes control of, thanks to his superior intellect.

Sure, his brains might make him look a little silly and top heavy, but who needs looks when you have a brain that can take over the world! Writers/creators of the upcoming M.O.D.O.K. animated series on Hulu, Patton Oswalt and Jordan Blum knock it out of the park with the first issue of this four book run… 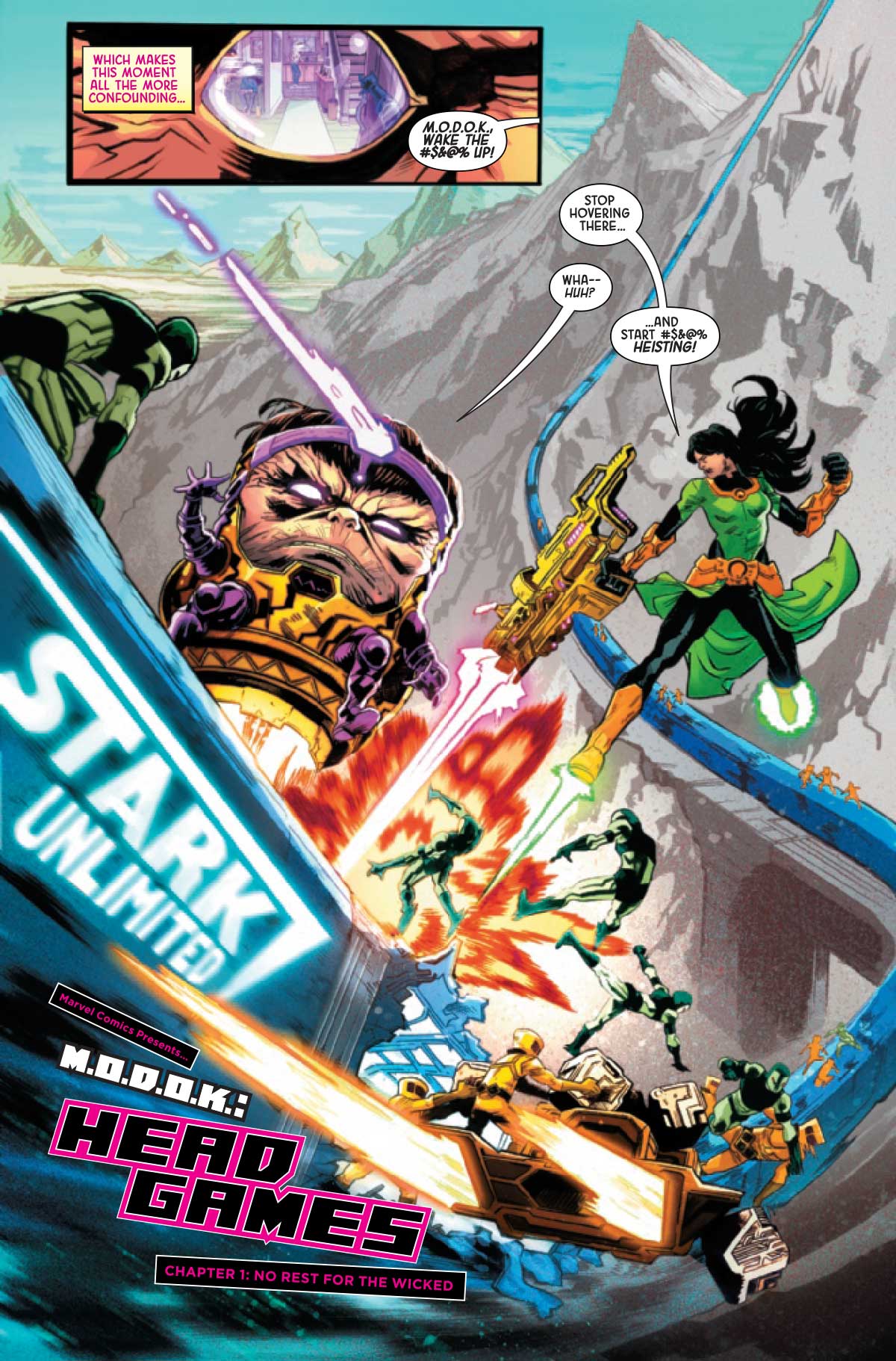 Now if you don’t know who these guys are, get your head out of the sand! Patton is a legend and I don’t have the space to even begin listing his credits and Jordan Blum has penned some of the best comedy over the past fifteen years over on American Dad, and Community. Seeing these guys come together for M.O.D.O.K., who is this silly, yet insanely maniacal, hilarious character, is the perfect fit for this team. Every once in awhile an endearing villain comes along that we can root for, and I got that feeling from M.O.D.O.K. right out of the gate.

Scott Hepburn and Carlos Lopez do a fantastic job bringing M.O.D.O.K. to life in a whole new way. I don’t want to spoil anything, but we’re graced with some gorgeous panels and the bright colors of the artwork balance out a darker subject matter. This opening issue does a great job of establishing what we can expect from this series going forward, not just from the comic book but the upcoming Hulu series as well. 4.5/5 Bibles.

Zeb Wells has provided the humor in the X books with Hellions. I mean he brought his wit to Spidey books. I ignored him on his New Mutants runs, and I may have really missed out. He’s got me rolling with Hellions. The snappy dialogue and bickering between psychopathic mutants with a flamboyant, mutant, Mr. Sinister at the helm makes me laugh out loud on trains in startling bursts (to others).

The art by Stephen Segovia is fresh. I do miss backgrounds with all the “talking heads”. It’s like those lazy 80’s John Byrne on his Fantastic Four days but in Hellions, everyone looks great. Everyone is drawn smoothly, stylistically, but not disproportionately. The coloring is nice too. I don’t just read this series digitally: I pick up this book in print since I appreciate the consistent artwork and funny writing… 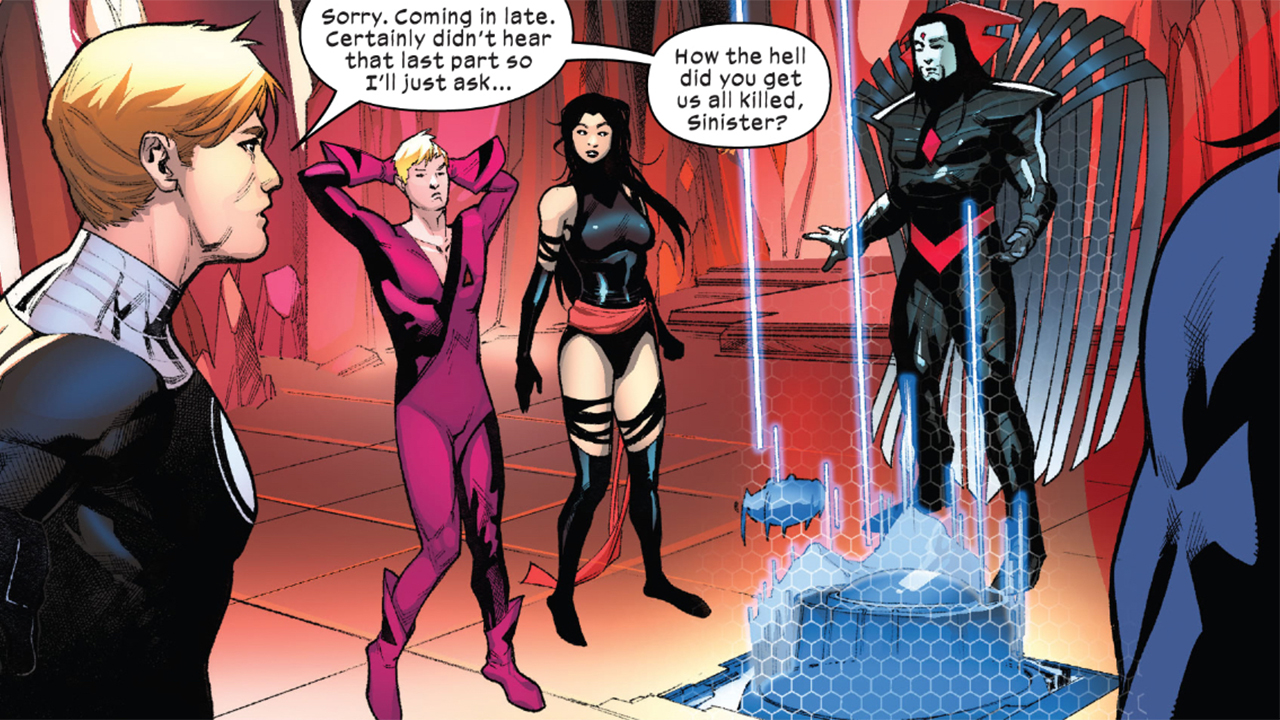 Issue Seven is an epilogue of the events from X Of Swords. **Spoiler alert** the team incurred some casualties on Arrako, which was technically not Otherworld. Sinister puts on quite the performance to get those mutants resurrected. Zeb also continues where Fallen Angels fizzled out with Psylocke / Kwannon. Is Kwannon a Japanese name? Ok yes it is. In Chinese it’s it’s Kuan Yin. This Psylocke is ironically named after the Goddess of Mercy. I hope they don’t discontinue this X book because it’s a real joy and now with a little more bad ass because of the events in X of Swords. 4/5 Bibles.

Well folks we made it! Chapter 22 of the epic mutant crossover X of Swords is here and the end is nigh or is this the beginning of something new, all new, all different. Maybe! The stakes of this tournament were always life or death, many will live on, but some will be lost.

Here’s a recap: after nearly losing every contest to the mutants of Arakko and being outmatched the X-Men find a way to fight on and somehow almost by accident even the score. The final contest Apocalypse vs Genesis! I saw this coming a mile away but it didn’t make it any less awesome! They both fought as if there was no tomorrow and in the end Apocalypse bested his wife but was unable to strike the killing blow. This of course did not sit well with Lady Luna Saturnye the puppet master in this whole twisted contest but before she could react the Annihilation helmet Genesis wore unleashed an army of demons to kill all that stood in its way. 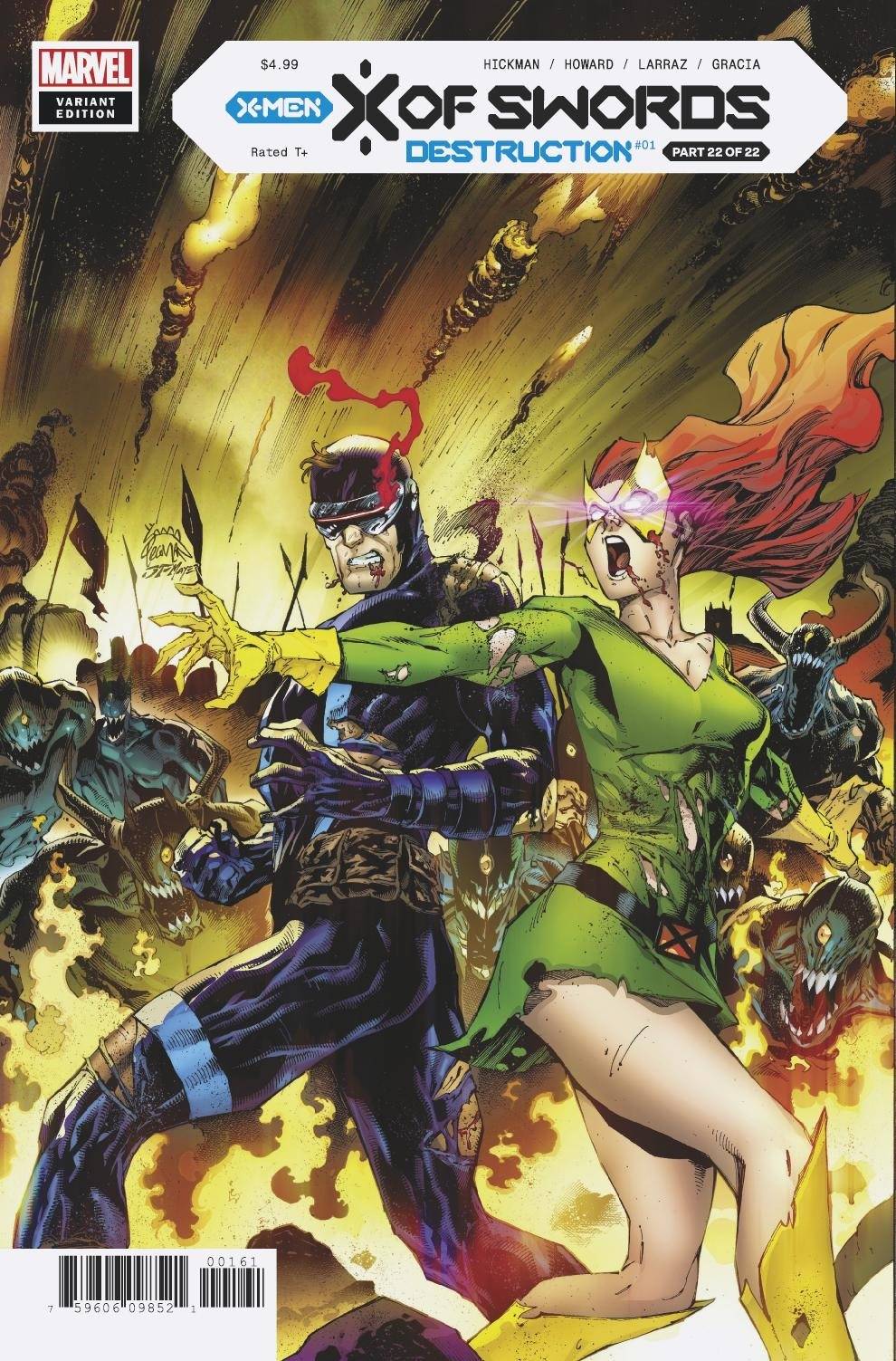 After hearing a distress call from Cable, help is on the way in the form of a Strike team lead by Cyclops and Jean Grey. The Captain Britain Corps have joined the fight after being resurrected by Lady Saturnye in an attempt to protect Otherworld from the demon horde at the footsteps of the Starlight Citadel.

Now, while the X of Swords finale wasn’t perfect by any means, it was still difficult to not enjoy the issue and the surprise twist at the end that is surely going to open up many new stories in the future. Some very cool new ideas have and will come out of this crossover that will have affect the X-Men for years to come. This issue was written by the mutant mastermind Jonathan Hickman and Tini Howard, with exceptional art by Pepe Larraz that literally leaped off the page! Hell, I’d probably give this the ol’ 5 Bibler but you might think I’m biased having read my other X-reviews; I just love the X-Men. Don’t you? 4.5/5 Bibles.

Walking into Justice League: Endless Winter #1 might seem ill-advised at first, but that’s precisely what I’d done. Unaware was I to the backstory to the beginning of yet another multi-title crossover event, but it was easy to get right into the groove of things. Right off the bat, we’ve got the Justice League working together to capture a quartet of C-list villains who have managed to “retire” to a tropic nation-state by essentially pulling a coup. As each member focuses on the task at hand, the Flash questions each hero as to how, exactly, do they find the right work/life balance?

Each hero provides a different perspective…leaving Barry Allen none the wiser, at least until he visits the home of Black Lightning. While all this is going on, an excavation at the former site of the Fortress of Solitude has inadvertently awoken the Frost King…a massive, ancient being of immense power who has awoken to take revenge on Earth’s heroes (a flashback late in the issue shows that this isn’t the Frost King’s first encounter with metahumans). 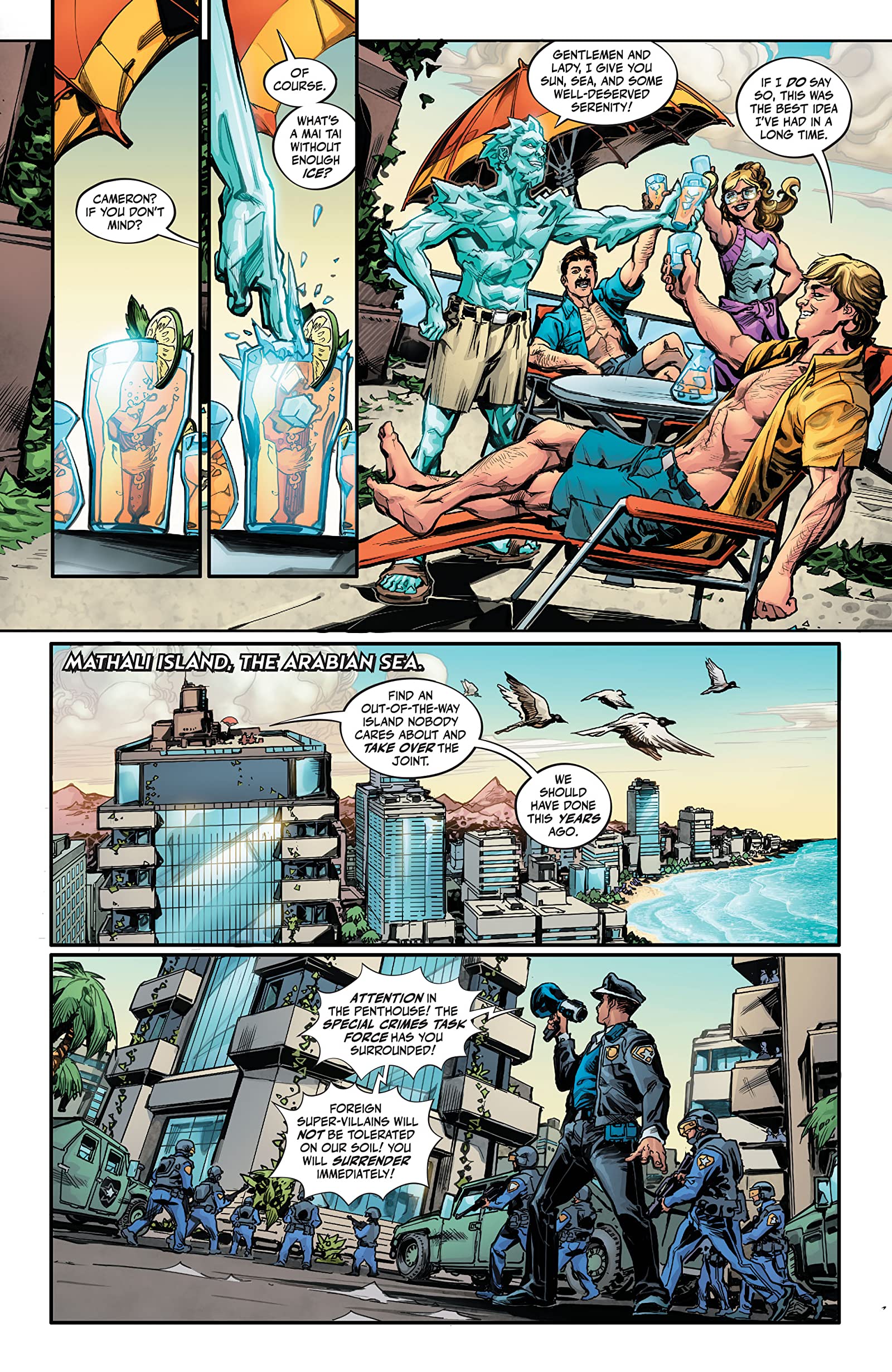 The action is fine, and the Flash has quickly risen in the ranks to be one of my favorite A-list superheroes to read (light, fun, bright, and perhaps one of the most important comics characters in the medium’s history), so the choice by writers Ron Marz and Andy Lanning to keep the focus on him is most welcome. The scene between Flash and Black Lightning, and his family, especially, goes to show how adept the character is at fitting into different tones and settings. The art by Marco Santucci, and Howard Porter, though, seemed a bit of a mismatch: it was easy to notice, almost page-by-page, when one artist had taken over duties and the other had moved on.

Perhaps it was due to the length of the book that the art didn’t quite gel with me as best as it could. At 30 pages, it seemed the story was ready to end at least four or five pages before it actually had, and perhaps stretching the talent thin to complete a longer title was not the way to go. But what do I know? I’m just the guy reading the book. Mostly harmless fun, with good character work, and a set-up for a massive crossover (if that’s your sort of thing), this title is a fun read, and a decent way to ease into the holiday mood. 3/5 Bibles