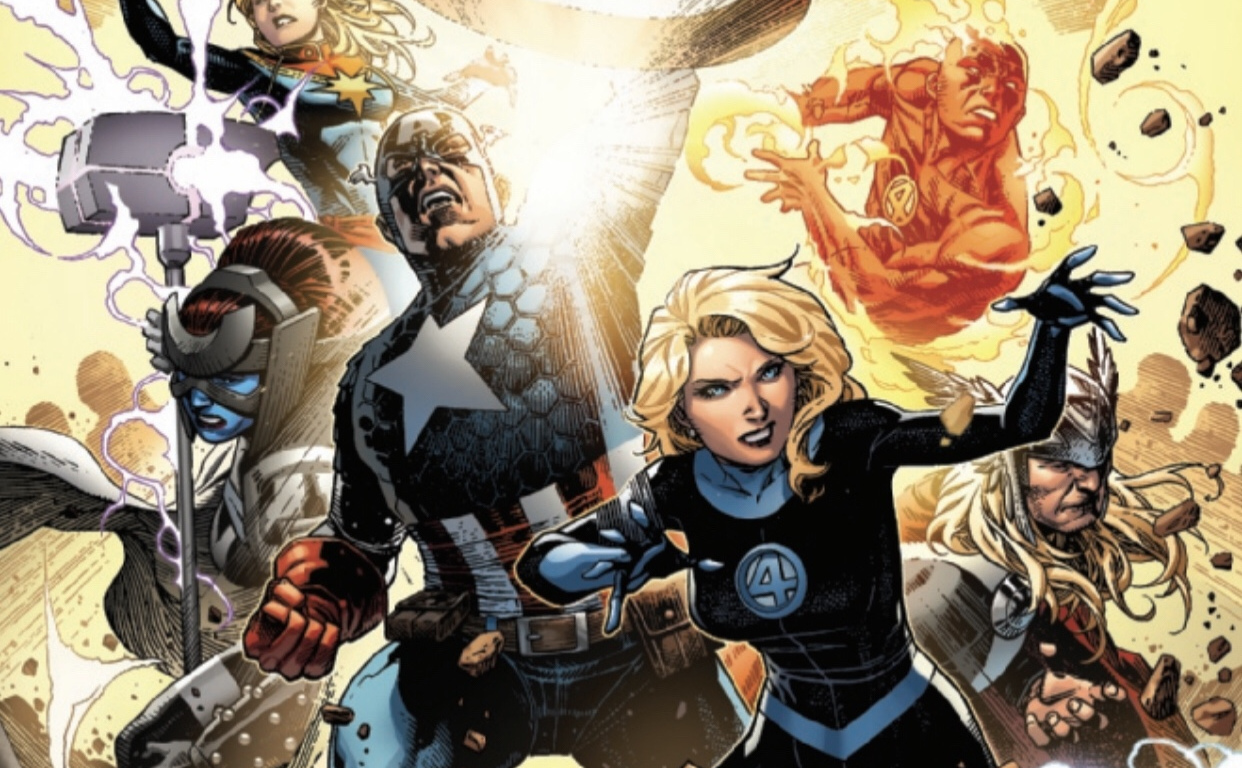 I don’t know about you, but I’ve been starving for new comics– especially from Marvel! During the quarantine I caught up on all of my comic reading and even read some stuff I previously had no interest in prior to COVID-19. Now enter: Empyre, the next big multi-title, “Fate of the Universe, Epic Summer Crossover” event from the MC starring the Avengers, the Fantastic Four, the X-Men, and co-starring.. every other hero in the Marvel Universe.

Sure, many if not all of these mega-crossovers get a little long in the tooth; yes, they often seem to rehash or retell the same story over and over; but, Empyre, for lack of a better description, feels new and exciting. Hopefully, Marvel can deliver the good and wow us True Believers with something special and memorable. Having top-notch creators like Al Ewing (Immortal Hulk) and Dan Slott (Amazing Spider-Man) on the writing tip, what could possibly go wrong? The artwork by Valerio Schiti and Marte Gracia is beautiful and kinetic, as every panel explodes with action. Just the way I like it. 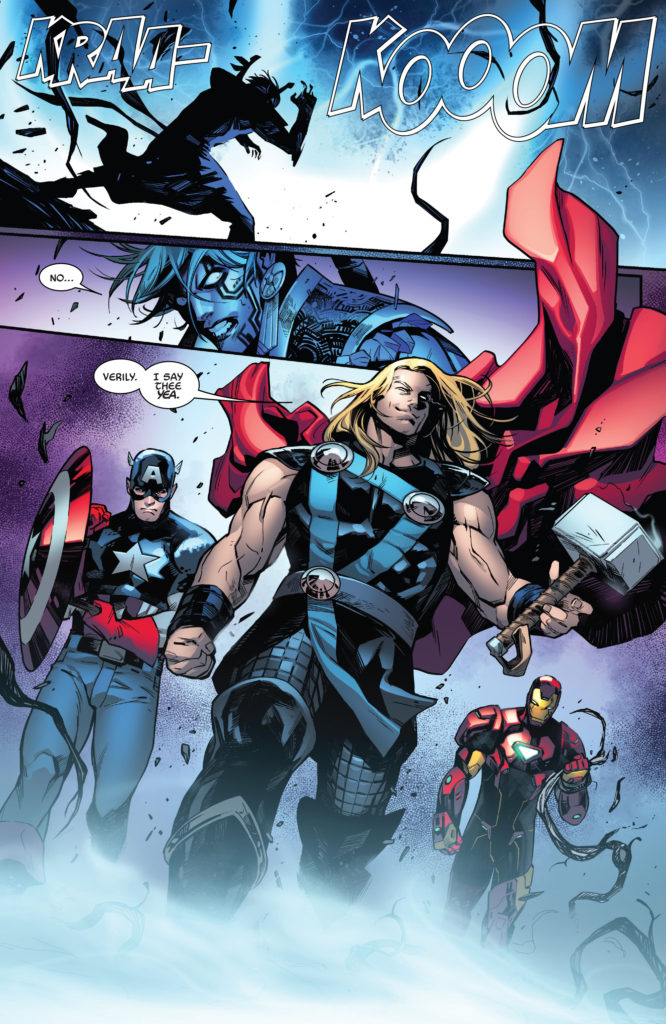 While I won’t dig into the whole Kree/Skrull history too much, here is the gist of it: After years of fighting each other the two races finally forge an uneasy alliance under a new leader against their common foe — the Cotati — a seemingly peaceful plant-like/humanoid race that have been wronged by both races and will stop at nothing to get their revenge and take over the universe. In issue #2 of Empyre, our favorite assembled superheroes had recently been betrayed and nearly beaten by the Cotati and must rally once more just as their new enemy begins an all-out attack on earth. Luckily, Cap and Crew have a magic sword, two magic hammers and a Captain Marvel to help turn the tide of battle.

WIll this be the next Marvel milestone event that sends shockwaves through the universe for years to come with long lasting effects? “IDK”; it’s just too early to tell. Do I like what I’ve read so far? Yes, so far so good. Am I having a good time? Indeed! I did say I was starved, though. I’ve never been happy to have so many tie-in titles before, as it looks like my quaran-thirst will surely be quenched for months to come. Hey, it’s what’s needed during these trying times. 3.5/5 Bibles.

Thanks to Gary’s review of Empyre #2, you should all be caught up on the premise of Marvel’s Next Big Event: Empyre! But True Believers wondering what’s neXt for their favorite mutants need not worry, X of Swords was also discussed earlier this afternoon and Marvel also had a chance to prepare us for Amazing Spider-Man #850 and new series, Werewolves By Night. It was quite the loaded 45-minutes. 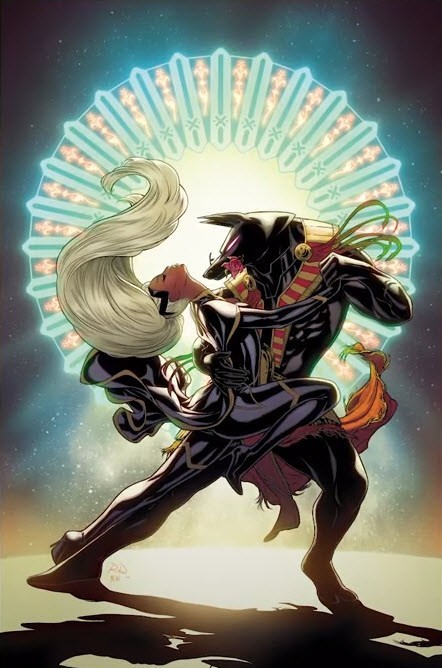 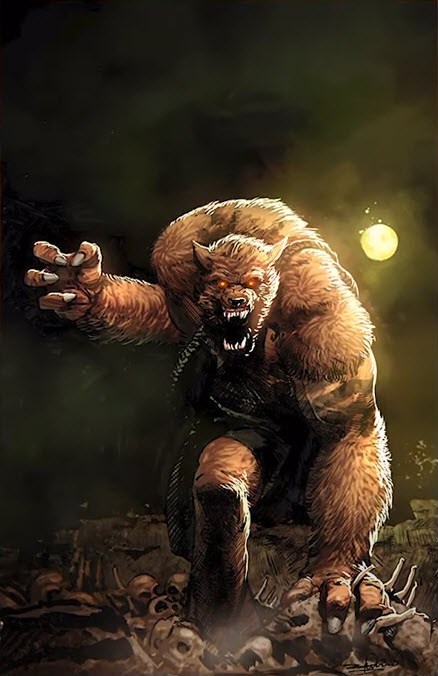 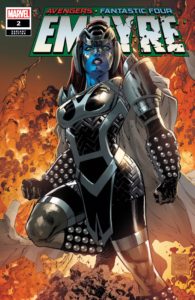 The two things I like about Empyre #2: the coloring job and the vegan teleportation gate right out of the X-books. I’m going to pay attention to my salads more often and attentively to make sure the radicchio isn’t teleporting my grape tomatoes onto my son’s plate. That being said, I feel like I’ve met my sentiments quota on anti meat based organisms from Swamp Thing books to Animal Man books past and present.

Reading the Cotati yammer on about “the red” is tiring. Issue 1 and 2 was pretty Captain Obviously scripted. I like Ewing on Hulk and dig me some Slott since Ren & Stimpy but this event dried up before it’s blossomed! Bring the meat sweats. 2/5 Bibles.

After multiple millennia, the Kree and Skrulls finally decided to settle their differences and unite under the rule of the hybrid we know and love as Hulkling (I swear his code name is trash) aka Dorrek VIII, also known on Earth as Theodore “Teddy” Altman. Plant-based life forms known as the Cotati are seeking revenge on the the aforementioned aliens for past crimes against their race through their leader the Celestial Messiah, Quoi.

What do the Kree, Skrulls and Cotati war has to do with Earth? Enter the Cotati claiming the Earth’s Moon as their base and starting their genocidal campaign of exterminating all of animal life on Earth. So now the Earth is in the crossfires of Intergalactic War between the Kree/Skrull alliance vs the Cotati. Great. 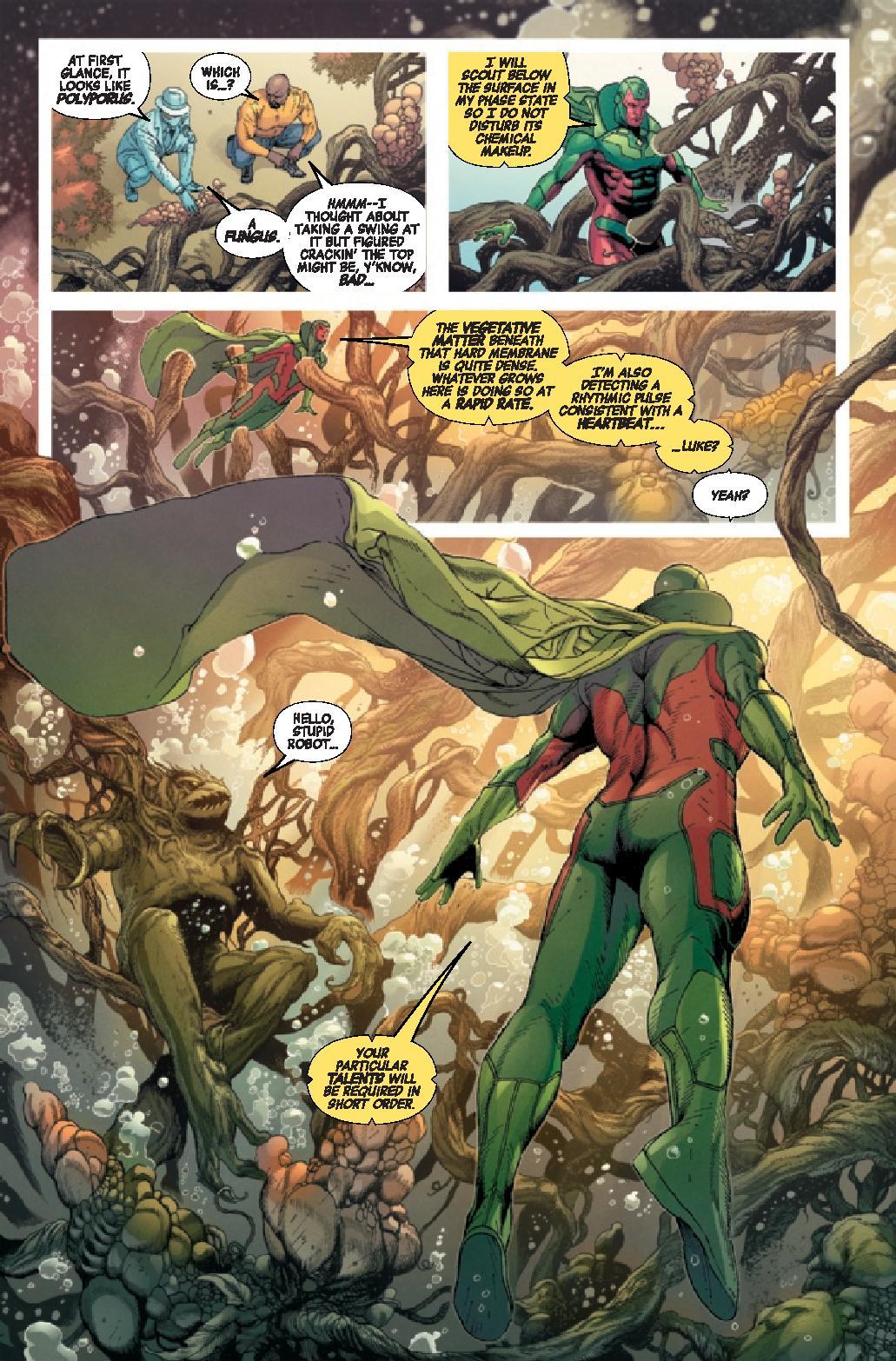 We begin with Cap calling all the heroes-in-arms and Black Panther briefing everyone of the situation. Vision and Dr. Nemesis team up with Luke Cage to investigate this reservoir that’s been completely filled with massive vines. Vision goes into to the reservoir to examine further to be greeted by a member of the Cotati (“Stupid robot”). Then we switch over to Quicksilver, Mockingbird, and Wonder Man rushing into a battle between all factions. Quicksilver arrogantly runs into a spear that hurt worse than Goldberg’s. Disagreements flair up between Wonder Man, Mockingbird and the Kree/Skrulls because murder vs. jail.

Meanwhile Jim Zub‘s story has Black Panther sends Kazar (and of course Zabu), Brother Voodoo, Scarlet Witch and the Black Knight to investigate Cotati activity in the Savage Lands of Antarctica. Carlos Magno and Steve McNiven‘s art pretties up this action-packed beginning to a 3-parter with wonderfully detailed action panels and plenty of cliffhangers for all True Believers. 4/5 Bibles.

Let’s start this off with the artwork because I am in love with this style. Matteo Buffagni (pencils) and Nolan Woodard (colors) bring this wonderful mix of modern shading with the lines and details of an early 90’s X-Men comic, allowing the eye to flow from frame to frame devouring every color. Now for the not so happy bit. They have taken one of the most powerful mutants in the world, Scarlet Witch, and used her pain and regret from causing millions of mutants to no longer exist to set up Plants vs Zombies. They even call it that!

OK, so, Jonathan Hickman and Tini Howard do a good job with characters and setting up the story. It’s a fun concept and quirky, but, Marvel, Plants vs Zombies stopped being relevant or cool about 7 years ago. Also, you’ve done the mutant zombie thing in the past, and it was glorious. There was no need to rehash it, and do my girl dirty like that at the same time. There are so many other stories taking place in this Empyre arc, like Hulklings ascension to a throne. I recommend one of those instead. 2/5 Bibles.