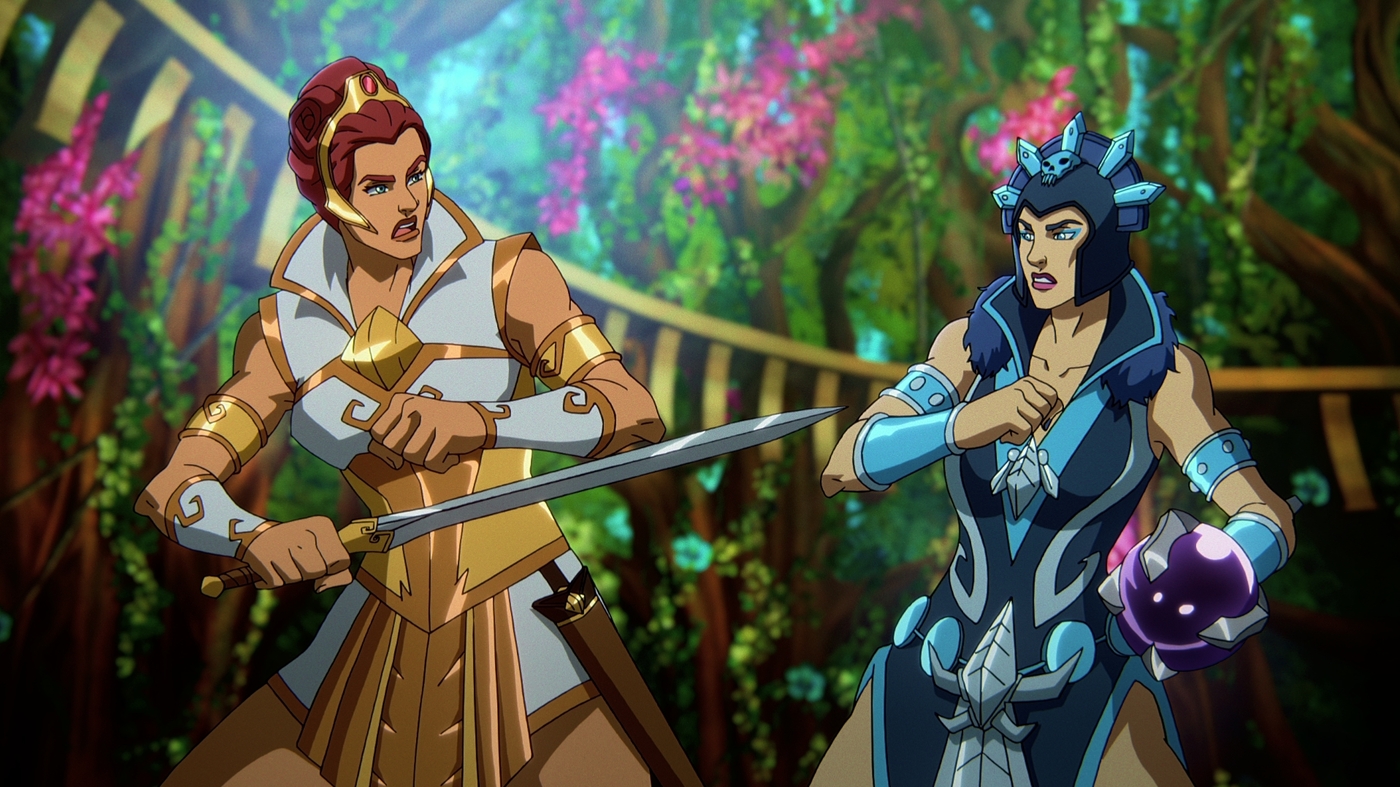 Alright, so… Wow. Following the first five episodes of Netflix’ new Masters of the Universe: Revelation, I had the biggest.. reve.. discovery. This MOTU reboot is, first, a solid take on the characters I grew up loving. Second, the CGI from Powerhouse Animation (Castlevania) is top-notch…

But you didn’t come here for all the adoration, did you?

Let’s begin right with the social media backlash. The audience scores of 30% Rotten Tomatoes and 2.0 Metacritic come chiefly from those upset that this story, Kevin Smith‘s story, sidelines He-Man (Supergirl‘s Chris Wood) in favor of Teela. Are these fans wrong to think that? Nope. Probably not. He-Man is not a visual central character in Revelation‘s first five episodes, and, frankly, neither is Skeletor (Mark Hamill). And you wanna know something? Thank God! Do I love He-Man and Skeletor? You bet your ass I do. Skeletor is iconic, and He-Man is a hero that many little boys grew up to idolize.

There’s also an argument that these two characters would be nothing without their tremendous supporting cast, which I will get to in just a bit. Because on a separate note, it’s interesting, that if you look at Mattel’s new toyline surrounding this iteration, both He-Man and Skeletor — sadly! — look awful but the supporting heroes and villains are a home run. That’s sorta, not-so-ironically a reflection on the Netflix show so far, too. That said, I’m deeply pleased with Kevin Smith and creative consultant and EP Ted Biaselli for fleshing out these avatars of my imagination…

Teela (Buffy a.k.a. Sarah Michelle Gellar), though I feel was unnecessarily masculinized in this telling, was still a show-stealer. Despite all the heavy controversies, the surplus amount of screentime (in comparison to her buddy Adam), her emotional choices, etc., I still mostly loved her arc, and cannot wait to see more in the next five episodes. It will be interesting to finally see the Sorceress (Susan Eisenberg) reveal Teela’s true destiny at some point, and the begging question finally answered: is Man-At-Arms (Ser Davos, Liam Cunningham) her biological or adoptive father?

Teela has always been a favorite of mine, and though the character design left something to be desired — hey, at least her action figure looks hashtag #sex! — her characterization was flawless. Now that leads me into Evil-Lyn. The showrunners clearly love the longtime Masters of the Universe villainess as much as I do, and Lena Headey voices her to perfection. Was Evil-Lyn just playing an animated Cersi Lannister? A tad. But come on, this is simpatico casting! It’s not hard to glean who is the creators’ favorites from even one viewing of these five episodes: Orko, Evil-Lyn, Man-At-Arms, Teela and Scareglow all shine and even, yeah, glow the brightest.

Here are my issues. Gal Gadot as Wonder Woman proved that a character can still look and be feminine and kick ass. Some of the more “woke” crowd will disagree, of course, but hear me out: When we masculinize already established feminine characters, are we really, secretly saying that “you need to look and behave more like a man in order to defend yourself”? I call B.S. on that. Like, why did Teela decide to shave the side of her head? That seemed to be thrown in as a specific political choice and could have easily been left out.

My other issue is with all the murdering and death. While I get that Smith wants to raise the stakes in this series, perhaps you don’t kill off 25% of the cast. Sans the aggressive kills and agenda-driven things tossed in, this MOTU lover has basically no other gripe with the show. But, 5 episodes? We need more. And if production is such an issue, switch to the Disney+ model and air one episode a week (but give us at least 8 episodes not 5).

Now having explained my loves and non-loves of MOTU: Revelation, let’s get deeper into why I believe this show mostly succeeds. As mentioned, I praise the focus on the supporting cast. Who hasn’t waited decades to find out who He-Man’s friends and Skeletor’s minions are?! Furthermore, the amount of fan service in Revelation was akin to eating chocolate covered strawberries; decadent, but you just want more and more and more — from the Eternia playset design incorporated in pre-ternia (heaven, or that Twitter guy who helps us toy nerds hourly), and the use of the rotons with the skeleton warriors, and finally getting to meet Scareglow (the terrific Tony Todd) on screen! This ultra He-Man/She-Ra fan (almost) couldn’t be happier.

In closing, this much-anticipated Masters of the Universe is such a super effort on the parts of the creators and voice actors, that… no, Kevin Smith and company did not kill my childhood; they actually took one of the best parts of my childhood and made it relevant in 2021, and that is a revelation! Good journey. 4.25/5 Whiskeys.