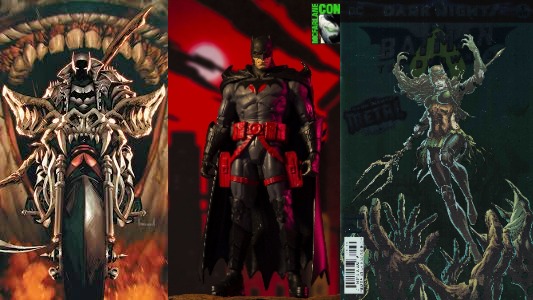 As you can probably tell, GHG has been on a toy-collecting news kick, especially with our recent premiere of our new action figure variety show, A Toy Kinda Mood. And to be quite frank, that mood hasn’t change the least bit for me, leading to some heavy curiosity as to what my new favorite line — this side of G.I. Joe: Classified — in McFarlane Toys‘ Dark Multiverse was up to this weekend with DC FanDome.

What toy collectors, custom creators and all-around DC fans got from Todd earlier today at the Dome wasn’t a whole lot; but, what we did get was a brief glimpse at a pre-painted prototype for Dark Nights Metal villain The Drowned (think Evil AquaBatWoman) and the Death Metal Batcycle, which looks simply Batastic in all its extreme McFarlane glory…

There’s no doubt that Todd has taken over Mattel’s DC Multiverse with a vengeance. The comic book/toy creator one of the most talked about lines in the action figure world, and these early looks from this morning surely have diehard DC Comics fans eager to get their hands on these latest additions.

Do we want more variety with McFarlane’s Multiverse? Surely. It’s about 80% Batman. Does Batman really sell well, and much better than every other character in DC’s Universe? Of course, and that’s an entirely different article for another day. Batman is the most popular superhero in the world — and arguably looks the coolest — and there’s a reason why we’ve seen four (and soon-to-be five, with Batman: Gotham Knights) Arkham games and not much shine from anyone else.

Two things: Batman is clearly Todd McFarlane’s favorite superhero after Spawn, and he’s quoted as such. Starting a new toy line for DC Comics and the extended DC Universe, it only makes sense for McFarlane Toys to see how well DC’s most popular character sells first before slowly expanding elsewhere. So if you want to see them take on the Titans, Doom Patrol and Green Lantern Corps, buy your Caped Crusaders, kids. It’s as simple as that.

Second, they’re labeling the entire line the DC Multiverse. In the video, Todd details (beyond mold ideas and production progress) his thought process behind choosing which characters to make next: there is none. McFarlane simply chooses who he deems the coolest, be it from the comics, animated series, movies, CW/HBO Max TV series or video games. But at least his recent Dark Nights Metal waves have a theme and made sense collectively. Besides, Scott Snyder and Greg Capulo’s wildly imaginative Bat-incarnations go hand-in-hand with McFarlane’s taste and vision.

While I would have preferred a more “SDCC” inspired panel here in terms of length and presentation, McFarlane certainly has the magic flowing with this Multiverse, and I’ll cherish the next 7-minutes we get from him the next go around. No doubt.