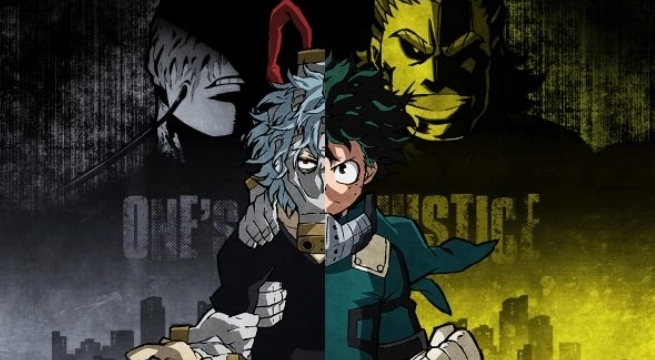 My Hero Academia is arguably the most popular anime series out today, and Bandai Namco was swift enough to prepare a video game tie-in for this Fall. While my hands-on time with My Hero One’s Justice at E3 and Anime Expo has proven to be more “treat” than “trick” for this October 26th release (PS4, Xbox One, PC and.. Switch!), one has to wonder why an anime with such a timeless story and character development has been relegated to open arena fighter. Eh, probably the same reason we’ve only been seeing The Avengers and X-Men lately in the same types of games: they’re easier to make. My Hero Academia is the Avengers-meets-X-Men of the anime world, so, perhaps Byking was thinking they had some larger-than-life heroes here to deal with. With nineteen confirmed playable, they may…

My second go’round with this game at Anime Expo was better. Hell, the best rounds of three I had with a fellow colleage was so fantastic I wish we had burned the footage and blasted it on YouTube. Jump Force may be taking all the hype — and its visuals super-wowed me at E3 — but My Hero might be the next Dragonball FighterZ, and mostly because of its unique pace. While you’re not able to tag in and out like the aforementioned game (your 2 partners are, sadly, there for shoulder button support only), the open maps will drive players toward more strategy; taking certain angles in combat and recovering, planning defense is more important than stringing a zillion button combos together. This makes MHOJ accessible to diehards of the show no matter how casual the fighting gamer, while keeping EVO wannabees thrilled with each character Quirk (Tomura Shigaraki‘s will even turn your PS4 controller to dust) and intense level destruction.

My Hero One’s Justice should wind up one memorable field trip with the sticks.

Warning: This is my first time playing an official Naruto game (I played as Naruto himself in Bandai’s 3D fighter, Jump Force). Thus, I have nothing of the past to compare to. What I can say about Soleil’s Naruto To Boruto: Shinobi Striker is that it’s surprising fun. The only mode made available to weebs at Anime Expo this past weekend was a Capture The Flag. I’m usually not the biggest fan of such a mode, but, in this case, it was I — Sasuke — who mostly had the flag, and after 5 or 6-minutes of getting my laissez faire ass kicked, the learning curve was quick. I was pummeling the opposition in our 4-on-4 matches quite handedly. Getting off a combo of rooftop-tailing highkicks, leaping ninja stars, and screen-shattering supermoves was a joy. The graphics for this supposed online-only affair were a very cartoonish cool. Colors popped on the screen.

While other players/YouTubers recalled some server stability problems, I had no such experence at #AX2018. Since I had no microphone to communicate either, there wasn’t any team chit-chat; that said, my experience chumming up next to 3 peeps I never met before wasn’t an issue. The game moves fast and frantic, and fights get intense once someone takes possession of the flag. Moving from rooftop to rooftop in the modernized Hidden Leaf Village was easy, with the type of verticality found in Crackdown. Bandai Namco will have an beta open in a few weeks that will last into early August. Expect Sarada (with Sage Mode) and Mitsuki (healing, the Uchiha Shuriken Jutsu Spring Storm attack) to join the fray. Shinobi Striker launches on the PlayStation 4 and Xbox One on August 31st.