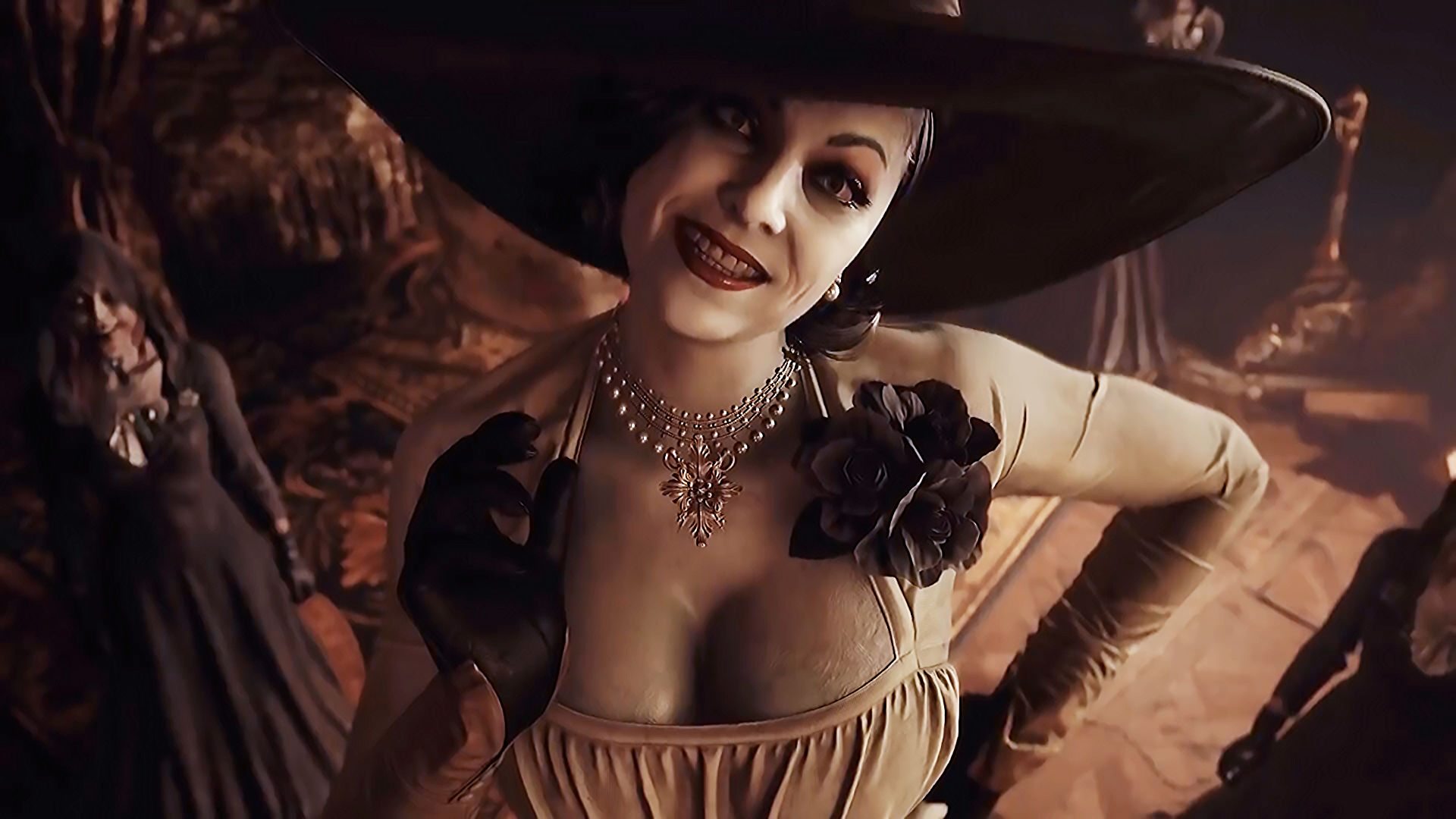 Capcom is one or the few teams that can annualize a series and still make me hype for the next in line. Resident Evil Village continues the legacy Capcom has been on since 2017 with Resident Evil 7. I had a blast playing this sequel and finished the game curious about what’s next. Yet while REVIII is undoubtedly one of my favorite games this year thus far, the horror stalwart still has a handful of issues.

For a Resident Evil game, it doesn’t require much to excite me aside from a stunningly horrific environment, an eerie sound design, and gameplay that persistently makes me feel tense. Here, I get that in more ways than I imagine. The RE engine didn’t fail to provide an environment with amazing lighting and details that kept my completion time a lot longer than it would’ve been if I didn’t stare at the stitching of a carpet or the pattern on a wall. It wasn’t just the finite details, but simply seeing the giant castle in the distance made me feel like I was looking at Dracula’s castle. It’s breathtaking. I’m a total sucker for the European gothic settings in games likes Castlevania and Bloodborne, so I was so excited to explore this massive castle.

Like many others, the marketing made me very curious about Lady Dimitrescu and her three daughters who dwelled in the lavish castle among a village littered with werewolves and Lycans. When I first arrived to the village, seeing the castle in the distance excited me to no end. When I finally entered the castle, my jaw dropped at every corner of it: golden wall décor, dark wood, chandeliers, intricate wine glasses, and so much more. I couldn’t get enough of the castle and I imagined something so big would lead to a healthy chunk of exploration, but it ended sooner than I was ready for. I wanted more castle, I wanted more Dimitrescu.

The minute I exited the old palace, the world opened up as I was given access to more areas within and around the village. I was introduced to more players as Lady D and her castle are just one of four areas to encounter. Upset I was, until I arrived to the second area; a lone house on a hill that provided one of the scariest experiences I’ve ever had in a horror game. I was on a high and ready to see every other area, and.. then the game took a dip and didn’t stick the landing.

It’s not that the rest of the game absolutely dragged in the way that the ship section did toward the end of RE7; it just wasn’t as strong as the first two areas in the game. Even with this decline, every section feels unique and refreshing. Together, they do feel like an amusement park for different types of horror, with the first two being absolutely amazing and the latter two being simply okay. I sort of understand why Capcom didn’t just focus on the castle because then the game could’ve easily fell into a rinse and repeat of Mr. X in the RPD. Shifting to different sections fostered more varied and refreshing gameplay. I just kind of wish the Castle section was longer and subsequent areas, shorter.

In between each of these four sections is a village with so much to discover and explore. Treasures, locked doors, optional puzzles, and animals to hunt. There are even some special hidden animals that can only be discovered if you find the picture revealing its location. These animals are used for recipes at the merchant which upgrades your max health and reduces damage when blocking. The best part about exploring? When you revisit places you previously sniffed around, there will be new enemies to face. For example, to unlock the treasure at the Beneviento grave, you need to find a stone slab that’s only accessible in the center of the village after you completed the Beneviento House. You’ll have to backtrack to bring that stone slab to the grave and unlock the treasure.

Sounds simple enough, but once you get to the grave, a huge Urias mini boss will jump in to defend the treasure before you’re rewarded. There are some really amazing set pieces, hidden puzzles, and optional mini bosses to encounter upon exploration and require a healthy amount of backtracking. You come back to the village many times throughout the game, as it’s the central location, and and all the new encounters are tireless.

The village even looks different after you finish the 3rd section; initially it’s full of fog, but later that subsides and the village is enveloped in a setting sun. I feel like people who mainlined this game truly missed out on its magic.

I clearly enjoyed exploring the village and most of the four locations. The Castle and Beneviento House were an absolute joy to experience that I wanted more. Moreau’s Reservoir felt very linear and Heisenberg’s Factory is the most boring section and is way too long. I liked how unique each section felt but it was a bit disappointing that there’s no backtracking once you finish the section.

You can go the area’s outside of those locations, like the vineyard of the castle or the grave of the Beneviento house, but that’s about it. I would have liked to backtrack within those area’s and have new enemies and set pieces to experience in the way the village did. Having this level of openness would also have contributed to improved connectivity for the entire map, which is also helpful for backtracking to pick up missed collectibles.

We can’t talk about a Res Evil game without talking about puzzles. The puzzles in this game have some similarities to previous Resident Evils but I found them to be too simple. This is something that RE7 also suffered from with the exception of maybe the Happy Birthday puzzle. Resident Evil Village could’ve benefitted from more puzzles or at least a few more complex puzzles.

Like other Resident Evil games, the gameplay begins more tense and toward the end ramps up to be more action focused. By the end, you’ll likely have upgraded weapons (pistol, shotgun, magnum, grenade launcher) and a bigger arsenal as combat ramps up when you head to the Lycan stronghold. This is where REVIII begins to shift from a survival horror game to feel more action focused, and only becomes increasingly more action focused as things progress. I rarely ever felt the intensity of the survival element because I had so much ammo and could even craft more or buy ammo at the merchant. I tend to prefer more survival-based horror in these games, but switching to the more action-packed sections are still fun.

One of my main complaints of Resident Evil 7 is the lack of enemy variety, where you only had The Baker family and about 5 variants of the mold. Resident Evil Village improves on enemy variety by a tenfold, as each of the four sections have a unique set of enemies and boss fights that aren’t simply giant mutated blobs that you have to destroy via weak points. You have several distinct versions of Lycans, Moroaica, Samca, Hauler, Soldat’s, Urias, the Demitrescu daughters, and the four lords (Lady D, Heisenberg, Moreau, Donna). There were different sizes of each enemy type and they each wielded different weapons. This variety made combat an absolute joy, even in more boring sections like the factory.

Having the four sections feel unique from one another definitely helped the gameplay feel fresh and contributed to a more varied group of enemies, but it made the story feel a bit disjointed. It felt as though these sections were designed first to create this theme park of different types of horror, and their connections to the bigger Resident Evil story felt secondary. This story is filled with plot holes that answered some questions from RE7 and how it connects to the bigger Resident Evil universe, but then created even more questions.

I’m glad the motivations of the enemies we faced were made clear, although there are some elements introduced into this series that makes things more convoluted than they were before. Having the four lords to encounter made for good gameplay, but I just wanted more time with them and to learn about who they were before things went to shit– in the way we got to know The Baker Family. If you’re looking to get some fulfilling lore out of Resident Evil Village, you may be disappointed.

A quick note of the Mercenaries mode, which is a mode included Resident Evil Village to add content. I really enjoyed this mode more so than other modes added to recent RE games. Here you go back to the castle, the factory, and different parts of the village that are filled with a bunch of different enemy types encountered in the main game. You’re given a limited amount of lei and arsenal to choose from to get through it. You’re timed in this mode, so you need to make sure you can chain kills and find orbs to give you perks and increase your time limit. They even add bigger versions of enemies you played in the main game, which really adds to the fun. I appreciate Capcom including more content in Resident Evil Village, and we’re even going to be given a multiplayer mode called Re:Verse, but that’s currently delayed.

The first half of Resident Evil VIII is an absolute gem, providing the tense and eerie environment that I look for in these games. If it wasn’t for the second half of this game not being as interesting as the rest, this could’ve been my favorite Resident Evil game. Yet, it still crawled its way to my top 5 favorite favs and definitely one of my favorite titles of 2021. 4.25/5 Whiskeys.