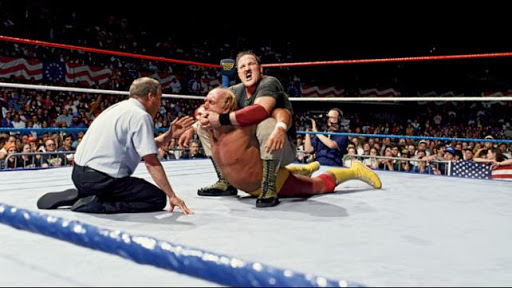 What’s up people?! It’s that time of the week again. Time to get in the way back machine, fire up the WWE Network and go back into time and relive a card from back in the day.

This week we’re traveling back to 1991– specifically to June the 3rd. “Justify My Love” by Madonna was number one on the Billboard charts. We were two months away from a Match Made in Heaven & a Match Made in Hell at SummerSlam. Operation Desert Storm had just come to an end a few months ago, but that didn’t stop the WWF from capitalizing on a good story. The main event of the evening on this night would be Hulk Hogan versus Sgt. Slaughter in a “Desert Storm Match” at the historic Madison Square Garden. I have no clue what this match is going to be about at all, but I’ll bet it will be fun.

Without further ado, let’s get into the show… 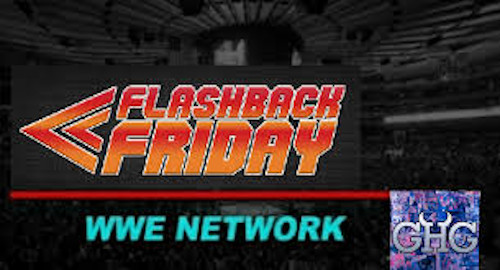 First things first, why a three-man booth? Three-man booths always suck. This time we get Gorilla Monsoon, Bobby Heenan and… Jim Neidhart?? Huh?? How sway?? I totally forgot that the Anvil joined the Wrestling Challenge team, and rightfully so. Ugh. 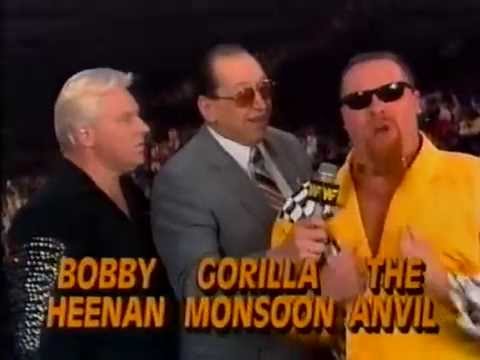 Smash v Ricky “the Dragon” Steamboat (10:14) – Strange to see Demolition Smash in singles action but this was after Ax and Crush both went away and months before he would be repackaged as the Repoman. No partner and no manager so I guess Smash was just putting over the young talent (Oh, wait.. nevermind). This was actually a decent match to start the show and Smash put on a good showing. Smash actually got Steamboat in a dragon sleeper and the ref let his arm drop three times… isn’t this supposed to be over now? Pretty sure that’s how this works. Somebody must have messed up. Guess we can call him Ricky Steambotch.

Soooo the ref lifted his arm a fourth time and held it for a bit, probably to make sure Ricky knew to not let it drop, and this time it stayed up. After a mistake by Smash, who really won this match, Steambotch hit a high crossbody block from the top for the pin. – 2.5/5

… That was a pretty uneventful finish. Who wins with a high crossbody block? Whatever. It was the show opener.

Warlord v Koko B. Ware (10:35) – No Dr. of Style out with Warlord? Guess we’re going manager-less tonight. Warlord owned most of this match by simply overpowering the smaller B. Ware. Koko almost got a pin after a missile dropkick but Warlord kicked out, quickly hit a stun gun on the top rope, and got the pin. Wait, what?? TF kind of finish was that?? – 2/5

… OK. Who decided that finish was the way to go with this one? Here we go again. 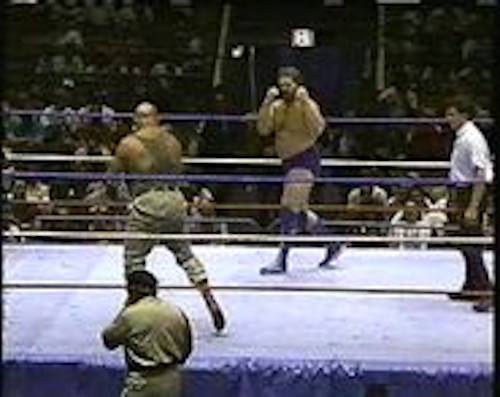 Col. Mustafa v Hacksaw Jim Duggan (5:47) – So much for no managers tonight. General Adnan is out here with Sheiky Baby. At this point, the Sheik shouldn’t have really been in the ring anymore. Just being real about it.

This was not the greatest match in the least bit. They did some stuff in the ring and ended up in the back as Mustafa tried to escape. Duggan followed and was ambushed by Slaughter with a 2×4. Somehow, the fans in MSG saw what was happening but the ref didn’t. He counted Duggan out and awarded the match to Col. Mustafa. Really?? – 1.5/5

… Don’t get why we’re protecting Duggan here at all. This finish was worse than the last two. Good shit pal.

Barbarian v Bret Hart (12:10) – For this match, Mr. Fuji was managing Barbarian. They announced that Heenan had set it up since he was part of that horrible three-man booth. Seems legit. Fuji eventually tripped Bret and accidentally hit Barbarian with his cane. This cost Barbarian the match, much to the dismay of Heenan. The Brain jumped the ring and shoved Fuji and they had a little back and forth. Finally something entertaining. – 2.5/5

… Can we please get Bobby Heenan v Mr. Fuji in an impromptu match??

Jimmy Snuka v Bob Bradley (4:02) – Bob who? Guess this is going to be a squash match. Seems like Vince loved to give the MSG crowd a Superfly squash match at every house show. Heenan is ranting about what he’s going to do to Fuji. This was clearly the concession stand and bathroom break match… unless you’re a Snuka mark. – 1/5 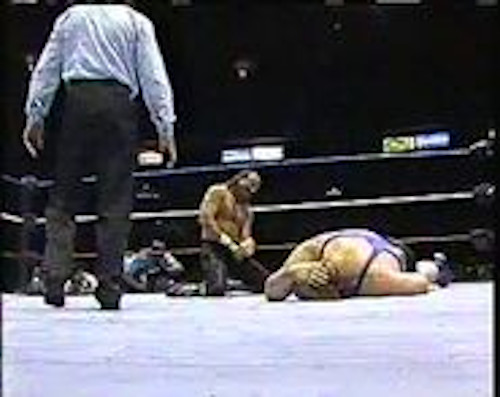 Earthquake v Jake Roberts (10:58) – Earthquake had squashed Damien on an episode of Superstars. This led to Jake introducing a larger snake, Lucifer, and a circuit of matches on house shows ensued. This wasn’t anything wild or crazy at all. Just your normal run of the mill match until Earthquake went to the top rope and the crowd went wild. Of course, he didn’t do anything and just got down. What a tease.

Earthquake tossed the snake bag into the ring to squash it and Jake fought him off. Once he did so, he took Lucifer out of the bag. The ref disqualified him. I don’t know why. He didn’t touch anyone with the snake at all. It just doesn’t make sense. Whatever. I give up already. – 2/5

… I’m beyond bored with this show. Can we just get Mr. Fuji versus Bobby Heenan already??

Next, we get Fuji in the back laying down a challenge to the Heenan Family. He challenges Bobby to a tag team match with two wrestlers from each of their stables. I wish that was going to be tonight!! It must be an intermission. We get a Bossman promo, a Slaughter promo, followed by a Hogan promo. At least we heard the rules for the Desert Storm match. No rules and you must make your opponent unconditionally surrender. Fair enough. Let’s talk about the weird AF mask Hogan is wearing. What. The. Fuck. Wait… he just called Slaughter a Commie in Camo. I’m not a history buff, but I’m pretty sure the Iraqis and the commies aren’t the same. Hogan basically admits he’s going to cheat. Cool story.

As a sidebar, there was actually another squash match with Tugboat going over on Bad News Brown that happened and they didn’t show on the recorded program. THANKS!! I appreciate not having to sit between that 2:42 shitshow. 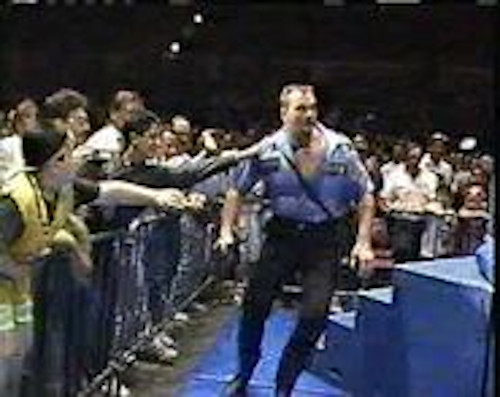 The Mountie v Big Bossman (5:55) – I’m guessing both Jimmy Hart and Slick for the night off on this night. Talk about gimmicks. The Canadian Mountie and the American corrections officer. How were these two never made into a tag team?? Mountie got knocked outside and Bossman tossed the ref. No DQ? Ok.

Welp, the Mountie shocked him with the cattle prod while the ref was down and knocked him out. That should teach him to toss the ref around. Mountie gets the pinfall victory. After the match Mountie shocked the ever-living shit out of Bossman and made him froth at the mouth. Boss might have just died. – 2.5/5 Bibles

… I’m going to download a Mountie in 2K19 tonight and I’m making a Mountie/Bossman team. IDGAF. How did nobody book this?? 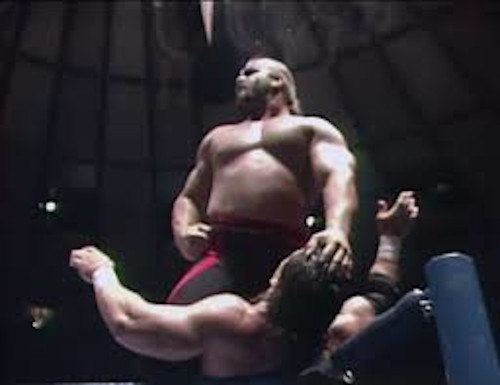 Paul Roma v Animal (5:00) – Power & Glory got in the ring and did a coin toss to see who would be in the match. Hawk wasn’t there. This probably was during his issues with alcohol and this probably was supposed to be a tag team match. Hercules doesn’t even look like Hercules here. Who is this guy? Monsoon keeps calling Paul Roma, Romeo. Heenan started doing the same. Why is Vince not in their earpieces FFS? OF course, Hercules gets involved but Animal still manages to hit a power slam for the pin. Pretty boring match. – 2/5

… If you needed one more beer, this was the time to get it. Is it over yet??

DESERT STORM MATCH: Hulk Hogan v Sgt Slaughter (15:32) – (For a full breakdown of this one, check the video above and join the Smarks for a watch along on the Smarks, Spotmonkeys & Superkicks YouTube channel). Okay, here we go: Hogan is the biggest cheater in the world. I don’t think he used one legal move in this entire match. He started out with sand in the eyes and continued with using the belt, whipping him with a rod, using a chair, and even tossing a fireball into Slaughter’s face.

Needless to say, Slaughter was bloodied in this one and Hogan came out with the win. Adnan tossed the towel in to have the ref call it. I can’t get over the amount of cheating that happened in this match by the American hero. Holy shit. This match did it all for me. I loved it. Not your poster match for technical wrestling, but holy shit, the action. After the match, Hogan brought some random fat kid into the ring to pose with him. It could be his son but I’m guessing it’s Nicholas’ dad. – 4/5

… If you didn’t do the watch along, shame on you. This match is fun. Stop reading and go watch along. This will be here when you’re done. I’ll even do it with you!

Overall this show was meh, at best. It’s so unimpressive, you can’t find single matches anywhere online. You literally need the Network to watch this crap. Nothing really outstanding outside of the main event. The rest of the show was your normal house show filler. Basically, every match was some sort of cutesie finish that didn’t need to happen that way. 50/50 booking and “protecting” talent.

The biggest heel in the business, Hulk Hogan, did what he does and beat the hell out of Slaughter so that was fun at least. I was more entertained by Heenan’s words about Fuji than most of the matches and for fuck’s sake, get rid of the three-man booth!!!

…It was an average show that I probably never would have watched if it wasn’t for the main event. It felt like I was watching Monday Night RAW but with better commentary… and Jim Neidhart.