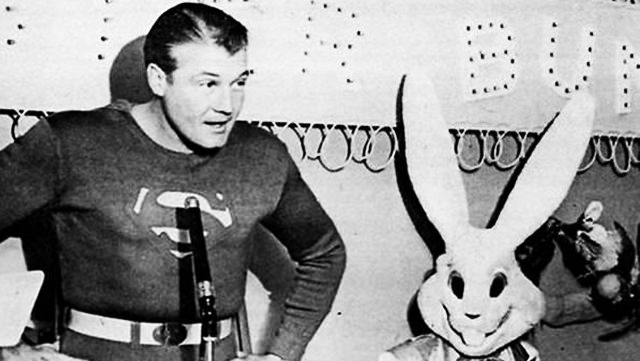 For my second week of quarantine reading, I want to go big, ramp the scale up as legendary as possible. This sentiment is so ambitious, my Wednesday Night Mass reading actually spilled over into Thursday night.. and thus we have Super Easter Sunday, but that is just fine…

Our first selection is SUPERMAN #400, cover-dated Oct. 84, a monster milestone anniversary issue that you could have had off the spinner rack for $1.50. I first purchased this book thirteen years ago when I went to Comic-Con but had such a legendary day that day (shook hands with Neil Gaiman and Warren Ellis; got imagination-charged to bursting by Grant Morrison when he told me I had to write this novel that happened to have the same title as a throwaway word he had tossed out in SEVEN SOLDIERS; got extremely intoxicated during Ellis’s ninety-minute talk…) so that by the time I made it to midnight and read this issue, it didn’t make as much of an impression as it would have at any other time in my life. 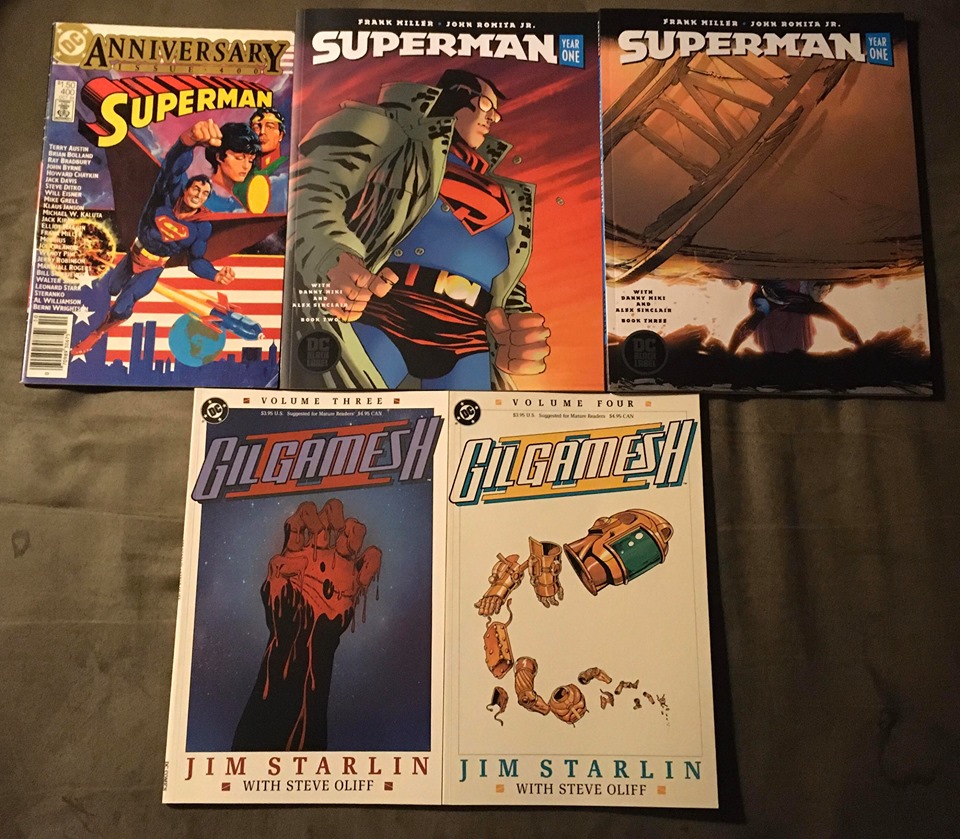 So, here’s the deal: Under the ever-watchful eye of editor Julie Schwartz, noted seventies Superman-scribe Elliot S! Maggin pens a tale about how the legend of Superman spans the ages and then they get basically every top artist of the day to drop in and illustrate a sequence. Howard Chaykin does the cover. Joe Orlando on opening sequence. Frank Miller and Lynn Varley deliver five pages of news footage that are completely a test-drive for what they’ll spend all of 1985 working on, THE DARK KNIGHT RETURNS. More interiors from Al Williamson, Marshall Rogers, Wendy Pini, Michael Kaluta, Klaus Janson, pinups by Jack Kirby, Will Eisner, Brian Bolland, John Byrne, Walt Simonson, Berni Wrightson, Steve Ditko, Mike Grell, Moebius, Bill Sienkiewicz, and then 10 damn pages of Steranko montage carrying us into the far future to send us out. This is a stunning stunning collection of talent and easily the best pre-Crisis issue of Superman that I’ve ever read. I recommend it to one and all without reservation. Mercy.

All right, next deal and speaking of Frank Miller, I never finished that SUPERMAN: YEAR ONE mini-series that he did with John Romita, Jr. and Alex Sinclair last year. It was the kind of thing where the Wednesday that #3 dropped, there were eight other books, and I ran out of gas like ten pages into that last issue at 3:00 in the morning. So, I o go back and reread #2 then power right on into #3. Y’all. 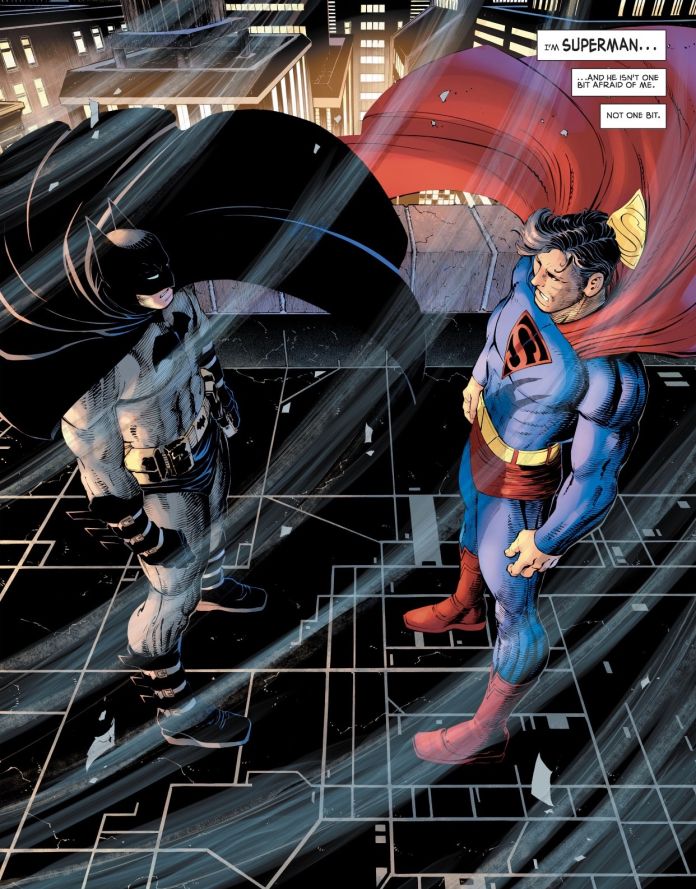 This series is nuts. I was super-concerned before it debuted that Miller’s apparent disdain for the character, as evidenced in the conservative-capitalist version who tore such a swath through THE DARK KNIGHT RETURNS, was going to make this a very cynical read, but there’s lots of hope. It’s just cut with that hard-hitting noir prose Miller’s been pumping out for decades now. I find the series for the most part enjoyable, but it’s totally bonkers. I usually don’t divulge interior plot details on new books to give folks time to read them, but this one’s been out for a few months, so let’s just take a look at #2 for a minute.

Here, check out this panel (just below!). A silhouette, brooding in the middle of the night. Without context, it’s a nice, quiet little beat. Nothing too bizarre at all. Miller’s hard-boiled style, cultivated through DAREDEVIL and THE DARK KNIGHT RETURNS and SIN CITY, cutting through just fine. But would you like the context? This is our boy young Clark Kent finding his way in the world, who, straight out of high school enlisted in the Marines and is now in Sniper School because he was such a crack-shot during basic training; the brass singled him out as an excellent sniper candidate. Kent never misses! 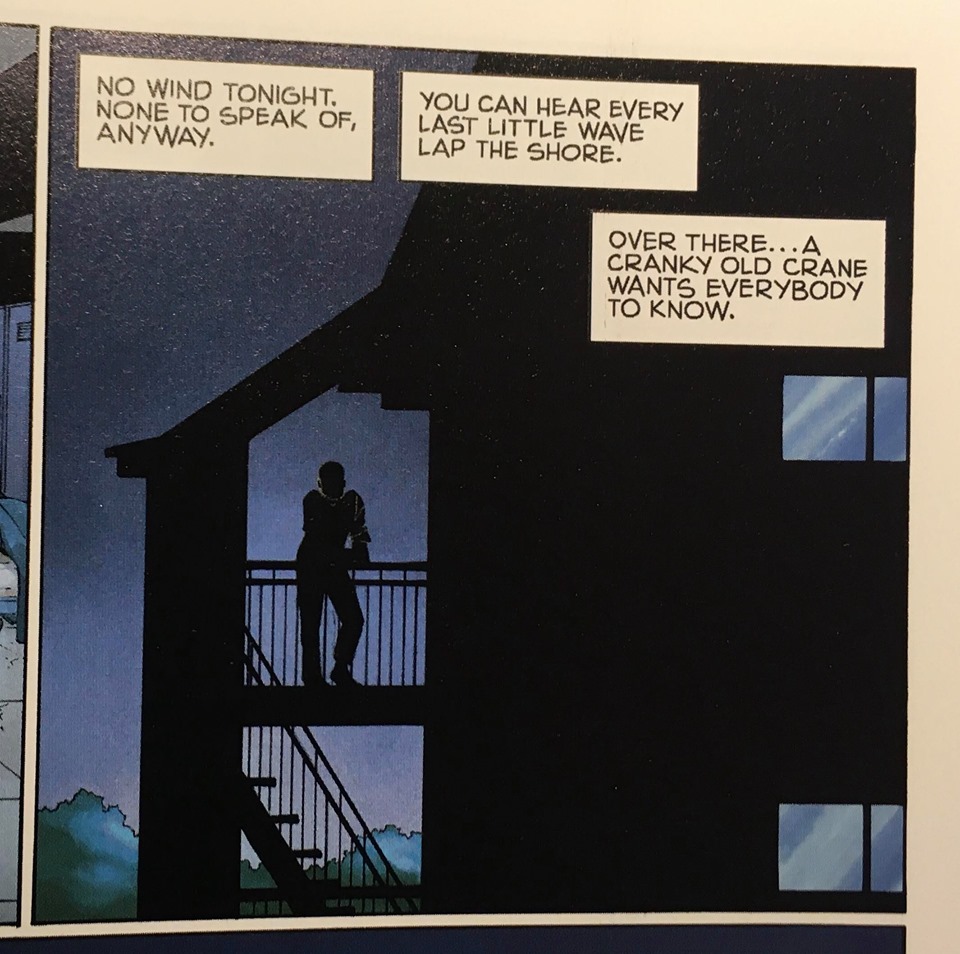 So, it turns out the Last Son of Krypton did some wet-work assassination before settling down as a reporter in Metropolis? Not to worry, because before we have to follow this narrative thread to its inevitable moral conundrum, Clark goes for a swim in the ocean and runs into classic mermaid supporting character Lori Lemaris and then the rest of the issue turns out to be a huge battle against her father Poseidon and his Kraken versus Clark for the heart and soul of Lori and Atlantis. Check out the JRJr./Sinclair two-page spread of Atlantis in all her demolished glory. This issue is all over the place but in a glorious messy way.

Then, #3 turns out to be the only one that kind of veers back on track to what one expects. Clark finally arrives in Metropolis and we meet Lois & Jimmy & Perry & Luthor and so forth. I won’t talk about the last section because it reeeeeally opens up, but I enjoyed the hell out of it. Wasn’t expecting Miller to provide so much heart to this character at this point in his career and was pleasantly surprised. If you can get your hands on the physical copies of these things, they’re printed out in over-sized tabloid format and a joy to hold in your own two hands. 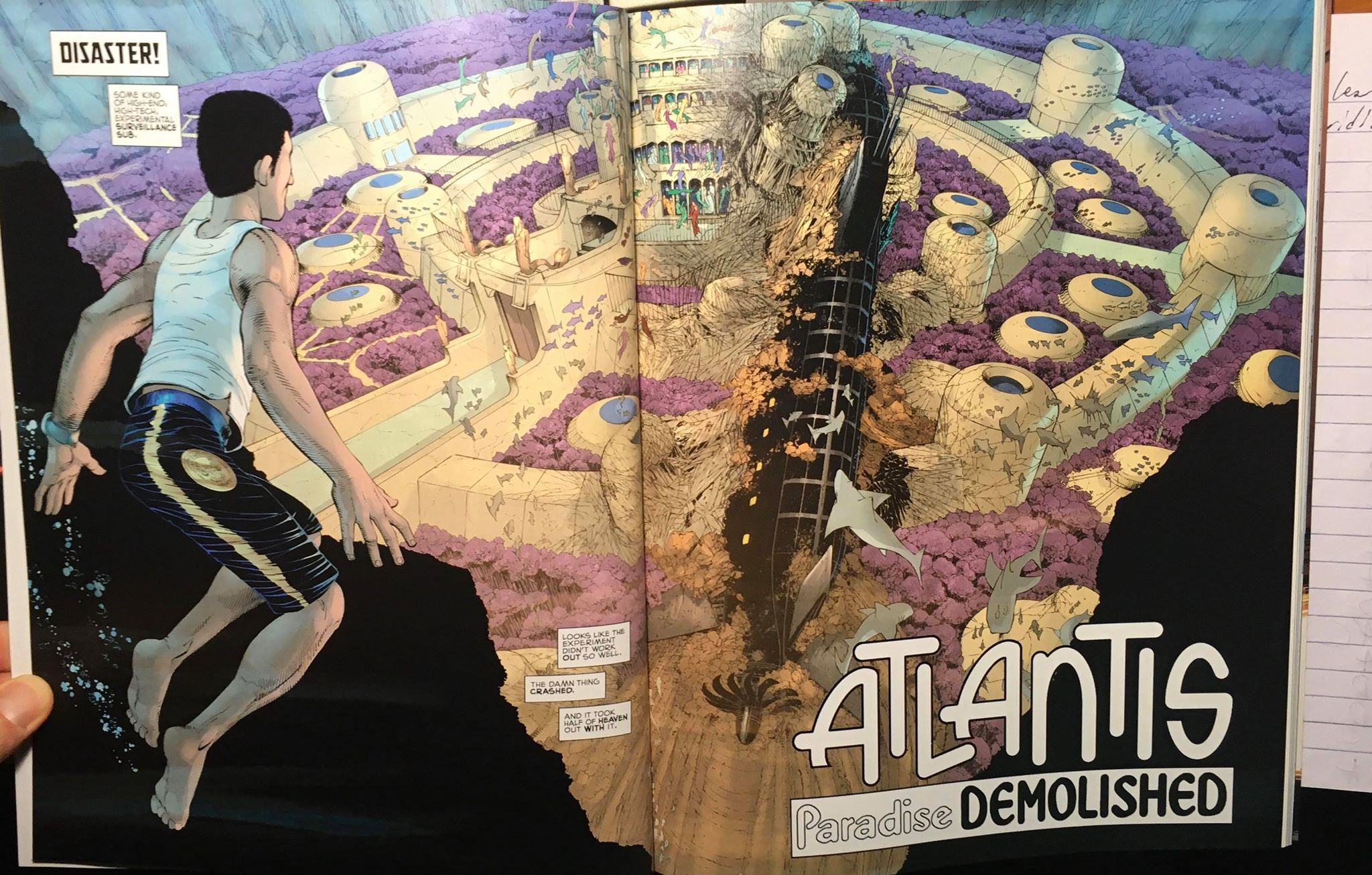 I ended the evening by going through #3 and #4 of GILGAMESH II, the old Jim Starlin series that I started last week. Highly recommended. Starlin writes and draws peak-career original science-fiction that Steve Oliff colors with taste and restraint. I’m not going to talk about the plot at all because you really ought to check it out for yourself, but it’s going to be a bit of a hunt because it doesn’t look like these guys have ever been compiled, so you’ve got to track down the original 48-page prestige-format issues (cover-price $3.95, quite a comparison with what that will get you today)(or last month I mean, ooof!). I guess maybe DC never collected this because Starlin would have been right out the door to start steering the Silver Surfer over toward INFINITY GAUNTLET? I don’t know, but this is a wonderful series and very much worth tracking down.

And thus Easter gives us another high-quality Sunday NightMass. I’ll see you next week for more glory and would love to hear about anything that you’re enjoying yourself! Stay safe, and take care of each other our there.