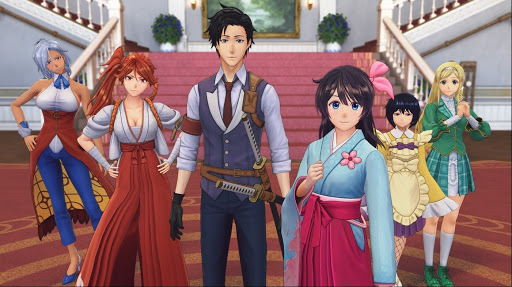 After 15 years Sakura Wars makes its long awaited return to American shores. Back when this game was announced in mid 2019 I immediately jumped on to anime forums and subreddits to find out all I could about this game, and I was not disappointed. Enlisting Legendary Bleach artist Tite Kubo, character designer Keiichi Matate (Metal Gear 3-V fame) and return of Legendary One Piece/1996 Sakura Wars composer Kohei Tanaka keeps in tune with the Sakura Wars tradition of having an all star team.

Upon looking at the first trailers of the game — and there are a lot! — I noticed a new cast of characters are introduced alongside the return of some series favorites. The world design is based in a 1940s steampunk Tokyo. With a mixture of Japanese and Western architecture the world of Sakura Wars looks fantastic yet very familiar.

The music in the trailer is also very familiar. Being a series vetern myself, the theme catches my interest immediately. Kohei Tanaka was the original Composer of the 1996 Sakura wars game. Many might recognize him through his other work, composing music for a little anime known as One Piece!

Researching the Kubos (Mechs used in-game during combat) I came to find that a lot of their weapon design was researched and designed by Keiichi Matate, who was responsible for most of the in-game weapons used in The Metal Gear Solid series (3-V). With him being involved in this project I am sure to see the most deadly and well equipped Kubos ever in a Sakura Wars title.

With an All-Star team handling this title it’s looking to be exactly what western J-RPGs fans need in order for these series to become a staple in the west. This will surely be a treat for any newcomers to the series or seasoned Sakura War vets.

The stage will be set for Sakura Wars this April 28th on the Playstation 4.