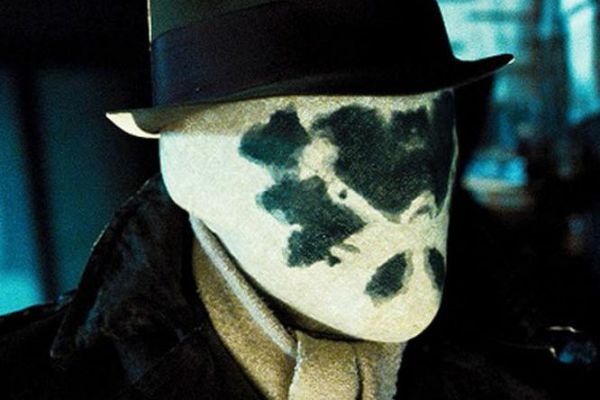 It’s been almost a year since Damon Lindelof’s HBO mini-series WATCHMEN and the Geoff Johns/Gary Frank DC Comics mini-series DOOMSDAY CLOCK, both sequels to the Alan Moore’/Dave Gibbons seminal masterpiece WATCHMEN, took their final bows. But the former just won a gang of Emmys, and DC Comics is only too happy to push out more new WATCHMEN content, so here we have RORSCHACH by Tom King & Jorge Fornes. No surprise that it’s a 12-issue maxi-series, the format first popularized by the original and employed to pretty devastating effect these past few years by King on THE VISION, MISTER MIRACLE, and currently STRANGE ADVENTURES.

But is this one inkblot too many? Does the reader see an intriguing narrative sweeping us away on yet another murder-mystery or an opportunistic cash-grab strip-mining intellectual property that DC has famously retained under dubious ethical circumstances? 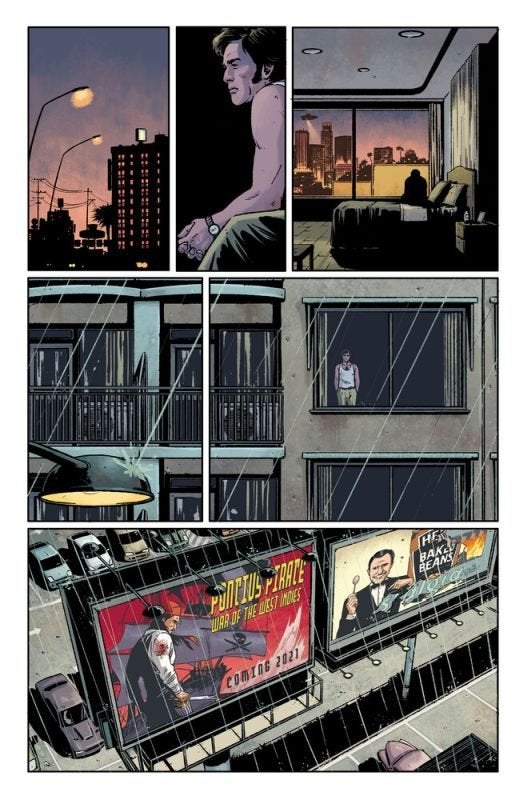 There are many fans who view the issue to be just as black-and-white as poor Walter Joseph Kovacs saw the world in October 1985. Supporting anything, paying a dollar bill for one page after that eternal last Moore/Gibbons panel in #12 cheapens the purity of the original work. And I see their point. I do. Never compromise. But then there’s the whole deal about Moore crafting the original narrative over the Charlton characters in the first place. They became his characters, certainly; but they first appeared on the page created by another man. And that Lindelof show was the best thing on television last year; the Johns/Frank series produced some of the best single issues. I’ve got to at least acknowledge all that contextual baggage just in order to tell you how well this thing succeeds on its own merits.

It’s narratively compelling. King certainly has the beats of this format nailed down, and that opening scene is one hell of a hook. We’ve known since he showed up on the back end of King’s BATMAN run that Jorge Fornes is charging hard at being the second coming of David Mazzucchelli. Extremely elegant storytelling, no line wasted. Every shot-choice ideal. Dave Stewart has been one of the best colorists in the medium for a couple of decades now and obviously doesn’t disappoint. 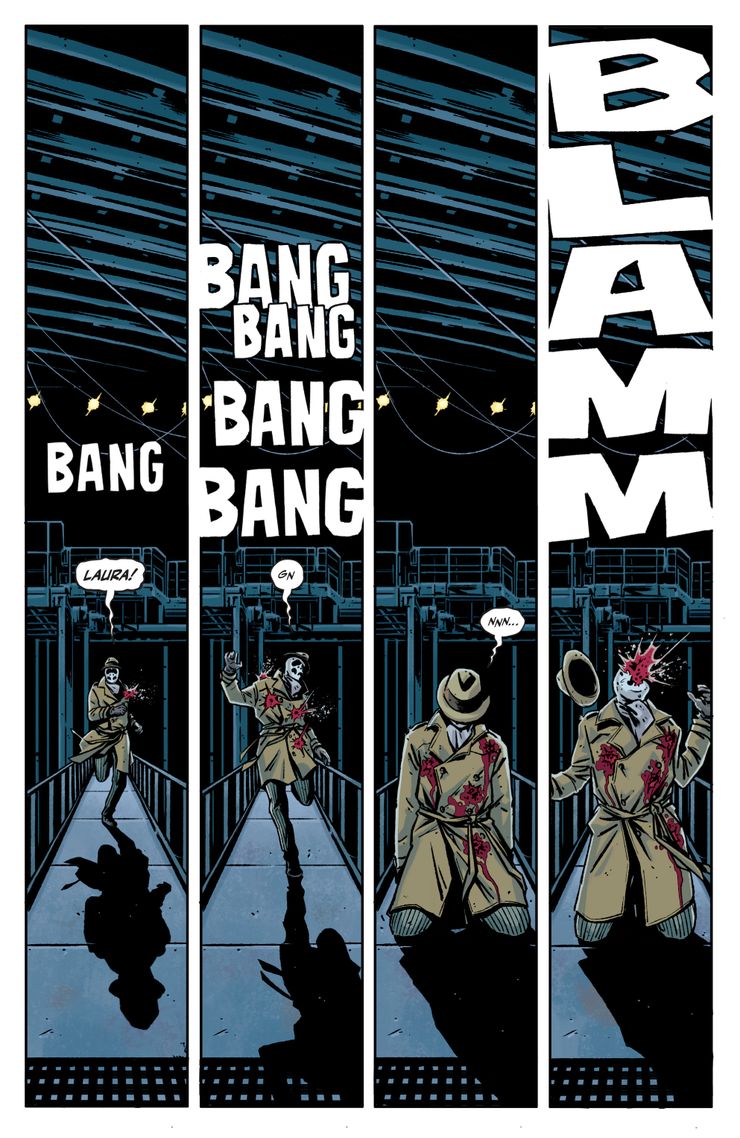 In terms of plot, we’ve got an interesting inversion on the trope of “Who Killed The Comedian?” into “Who Is The _________ Who Was Killed?” Sprinkle in an old tape of a seance that actually happened at Supergirl-creator Otto Binder’s house in 1973 attended by a teenage Frank Miller, follow that up with an unmistakable Steve Ditko analogue to bring us all the way full circle to the Charlton characters he created in 1966 who started this all, and you’ve got one hell of a mystery crackling.

Two, if you’re wondering how King can possibly land all of this, imbue it with any meaning save for what he chooses to impose. We will see. 4.25/5 Bibles.

Boom! Studios brings us the newest series from Dan Panosian’s sophomore effort with An Unkindness of Ravens. Speaking of sophomores…who was expecting comic book’s own Urban Barbarian to unleash a…high school drama? A high school filled with cliques, mysteries, and witches, to say the least?!

Set in New England, we’re introduced to Wilma Farrington and her father as they move back to his childhood town of Crab’s Eye. Everyone remembers being the new kid in school, sure. But imagine being the new kid who just so happens to be a dead ringer for a fellow student who mysteriously vanished a short time ago. Not only do you need to deftly maneuver your new schedule, figure out the good kids from the bad, deal with which group to make friends or enemies with – but you also have the entire school giving you the stink eye? Talk about your high school drama! 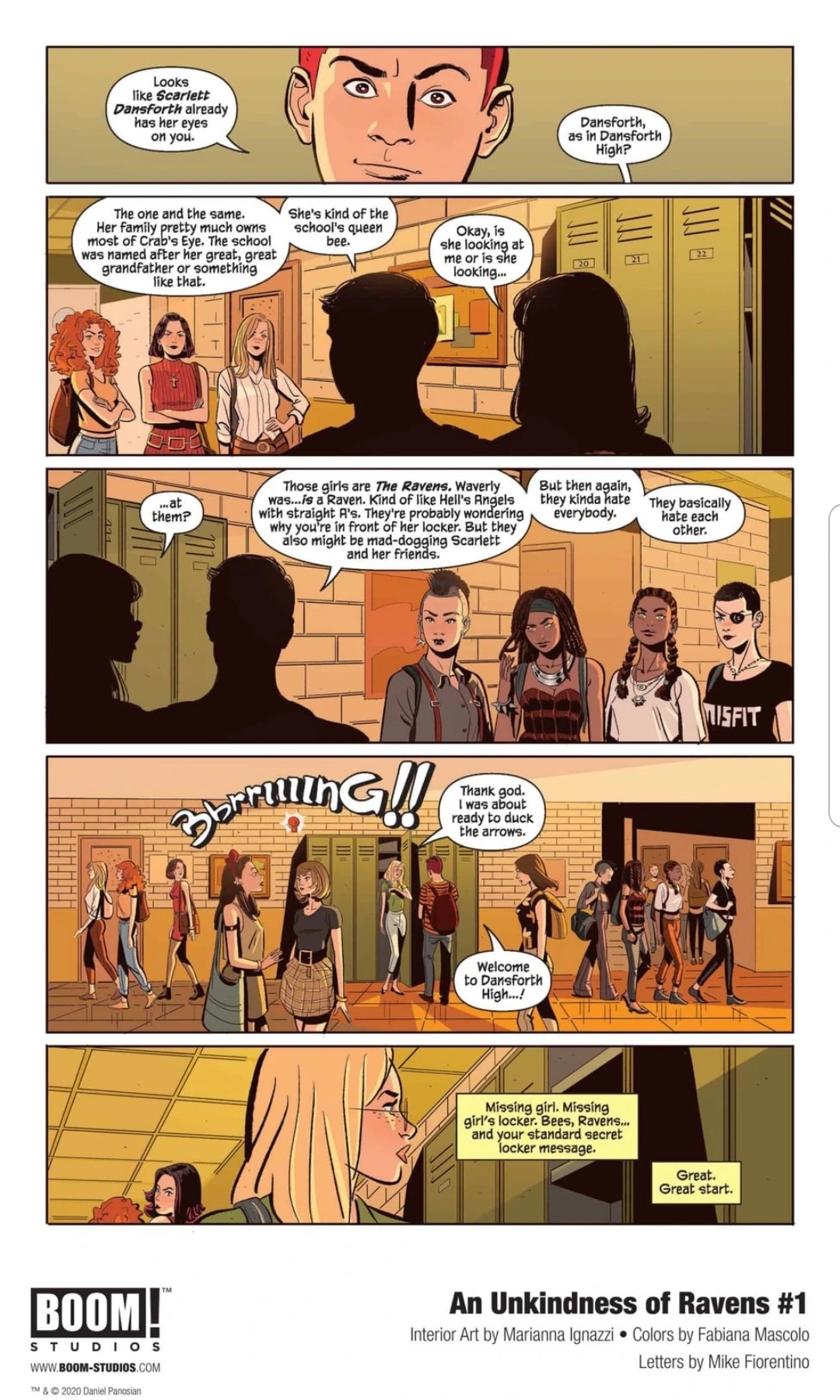 It’s part Heathers, with a sprinkling of Riverdale with a dash of The Craft mixed together into a 5 part drama. The cast fills quickly as we meet Wilma’s classmates. Ansel Friend acts as her tour guide, Scarlett Dansforth is the rich and popular queen bee, and we meet The Ravens. The Straight-A’s outcasts Yana, Vikki, Xooey & Zaida. Lunchroom drama leads to Wilma making a decision that brings us to the first issue’s dramatic cliffhanger that has me hooked.

Panosian is a co-founder of the Official Drink & Draw Social Club, inker, penciller, cover artist, and sole creator of the crime drama SLOTS (Image/Skybound). This time around Dan’s providing covers along with creating and writing for Marianna Ignazzi who is making her stateside comics debut from Italy. Her super clean art style has a Venture Bros feel to it and she seems to have zero issues filling the classrooms and hallways with students. 4/5 Bibles.