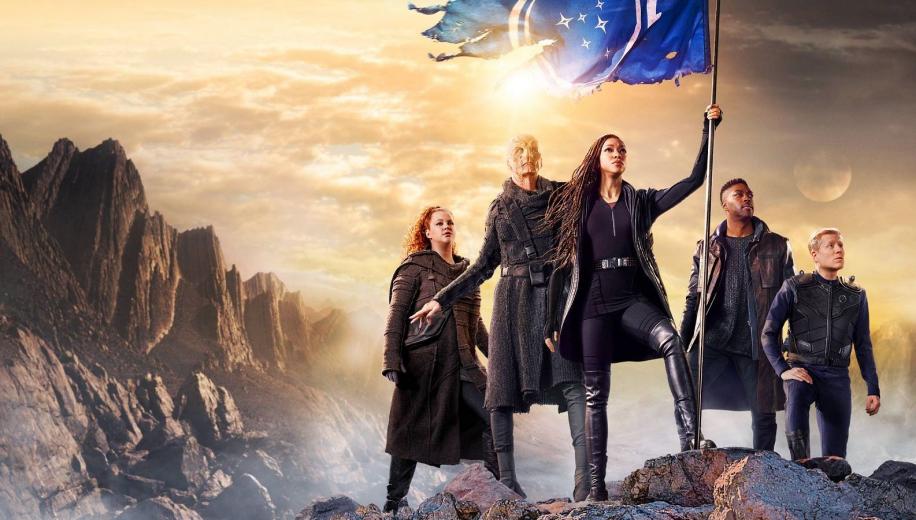 Having evaded the confines of continuity and the 23rd century at the conclusion of season 2, Star Trek Discovery finds itself reinvigorated nearly 1000 years into the future of Gene Roddenberry’s universe. Meeting the Han Solo-esque Book (David Ajala), and learning that the long-fought peace of the Federation has since crumbled following a yet-to-be explained cosmic cataclysm, Michael Burnham (Sonequa Martin-Greene) finds herself clinging to the one thing Star Trek has always embodied: hope…

Oh, yeah– New Trek, who dis? When they said Disco Season 3 was going to be a reboot, they meant it. The premiere focuses exclusively on Burnham as she experiences this strange future where the United Federation of Planets is gone. In fact, the only evidence that it ever existed is an abandoned outpost where a man has sat for 40 years, hoping that one day a Starfleet office will appear.

J.L.: Which is wild, Destiny, with Season 2 finding its footing after a rocky as hell S01. So I guess the far future seems to be the best fate for Star Trek. The post (far-post-) TNG era was always ripe for solid storytelling ground, and now that the show is no longer beholden to story traits, established characters and continuity, and an era that seemed mined to death (did we really need a second prequel series?) Discovery is thankfully free to live up to its name and potential, free of any preconceived moorings.

DESTINY: And what is the year 3188 like? Firefly, apparently. As you mentioned, we also see plenty of Book, the courier (read: smuggler) whose ship Burnham crashed into, and his giant cat. Even the way the two of them escape is Firefly-esque. It’s not bad – #Browncoat4Lyfe – but it felt probably the least Trekkie the show ever has. I’m sure this will change when we eventually catch up with the crew of the ship, but right now it’s just weird. Enjoyable and intriguing, but weird. 3.25/5 Broken Tricorders.

J.L.: While so very true, Alex Kurtzman seems to have a deft sense of what this series is, and the advance renewal of season four makes for a confidence in where the series is going. And I’m all for it. Hitting that “Firefly” territory is where Star Trek Discovery should have hit to begin with; glad it’s finally made the journey– and my initial theory of where it would wind up proved correct! 4/5 Bibles.