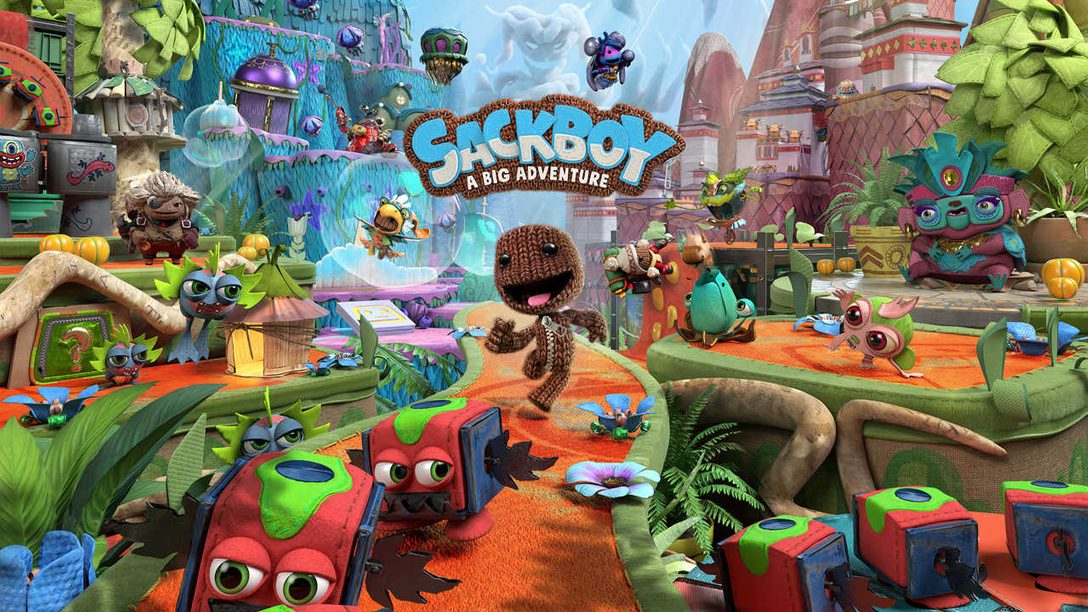 Lord knows the world needs heroes. Sackboy.. is that hero. Sackboy: A Big Adventure is my surprise hit of 2020, a seemingly gentle (yet later relatively vicious) platformer with a unique hand-crafted aesthetic. I never played Yoshi’s Woolly or Crafted World‘s so I can’t exactly compare the two, but this Big Adventure looks downright splendid on the PlayStation 5. Every inch of Sackboy‘s fabric environment is made out of canvas, wool, satin, and googly cardboard “Funhouse” pop-ups. Kids will love the look of Sumo Digital’s off-shoot follow-up to Little Big Planet, and adults will too, until they get to end of world two, when things get halfway-hard like a difficulty meshing of Rayman and Cuphead…

While Sony’s Sackboy is also available on PS4, the game plays definitively on the PS5, due to its high level 3D design, and, more importantly, utilization of the DualSense motion controllers. As mentioned on the last episode of the Geekdom Gamescast, we dug the way Astro’s Playroom set the stage for this new generation of gaming with the DualSense. Sackboy doesn’t quite give us the overhauled experience with the new pad like Astro, but does give you some unique and immersive game-playing surprises every now and then. While I did expect more “haptic feedback” with the game, it’s understandable that Sumo Digital’s development exceeded their brief use with PlayStation’s latest controller.

Getting back to challenge, the game is absolutely not the Soulsborne-level nightmare of Cuphead, but it’s far from a cakewalk once you get to the end of the second world. Until then, Sackboy was the platformer I’ve wanted for the new gen, a relaxed departure from the other high-octane games in my current PS5 rotation: COD:BO Cold War, NBA 2K21, Spider-Man: Miles Morales, and the sweatier-palm platformer thus far, Astro’s Playroom; but I do see these two swapping in difficulty the further I get — and the more my little knitted Baby Groot-level cutie perishes.

The challenge is incidental, though; the floaty jumps and awkward, yet charming character animations are what make the game tough past the first world– when I started to die, or die often, I had more blame on myself for pressing the wrong button, or being impatient, or just getting pissed at Lil’ Sacks for not quite jumping high enough when I held down X; while not a gameplay wrecker, our hero is less responsive than Mario is in his own 3D adventures. That’s for sure.

But what this platformer does best of all is keep the head boppin’. A Big Adventure has so much funk, so much so that even Kool & The Gang‘s “Jungle Boogie” and Bruno Mars‘ “Uptown Funk” are remixed into the soundtrack! Even more surprisingly are tunes from David Bowie and Britney Spears. But I’ll leave the song choices to your imagination. Even without the hits, Sackboy‘s hypnotic score is top-notch. And once you get into the groove, the amalgamation of hot tracks and dope platforming offers some superior replayability. Even better, you can hope on with up to 3 other peeps couch co-op, although we know that it may be a while before most of you get to test that experience out, unless, of course, you have 2-3 tiny ones of your own.

Throw in a cute story with some solid voice acting, great outfit customization (my two fav get-ups right now are a “Rey Mysackboio” a.k.a luchador costume and a totem demon; you can also dress up as a glamour rock queen and an Elvis impersonator, among countless mix-and-match costume options), nifty weapons (the boomerang in particular is trusty AF), somewhat challenging but hardly toss-your-DualSense-into-the-QLED boss fights, hidden bonus stages, superbly designed levels, and Sackboy: A Big Adventure — despite its sometimes slippery mechanics and strange, often frustrating platforming angles — should be an auto launch-window purchase for your giant new shiny PS modem. 4/5 Bibles.