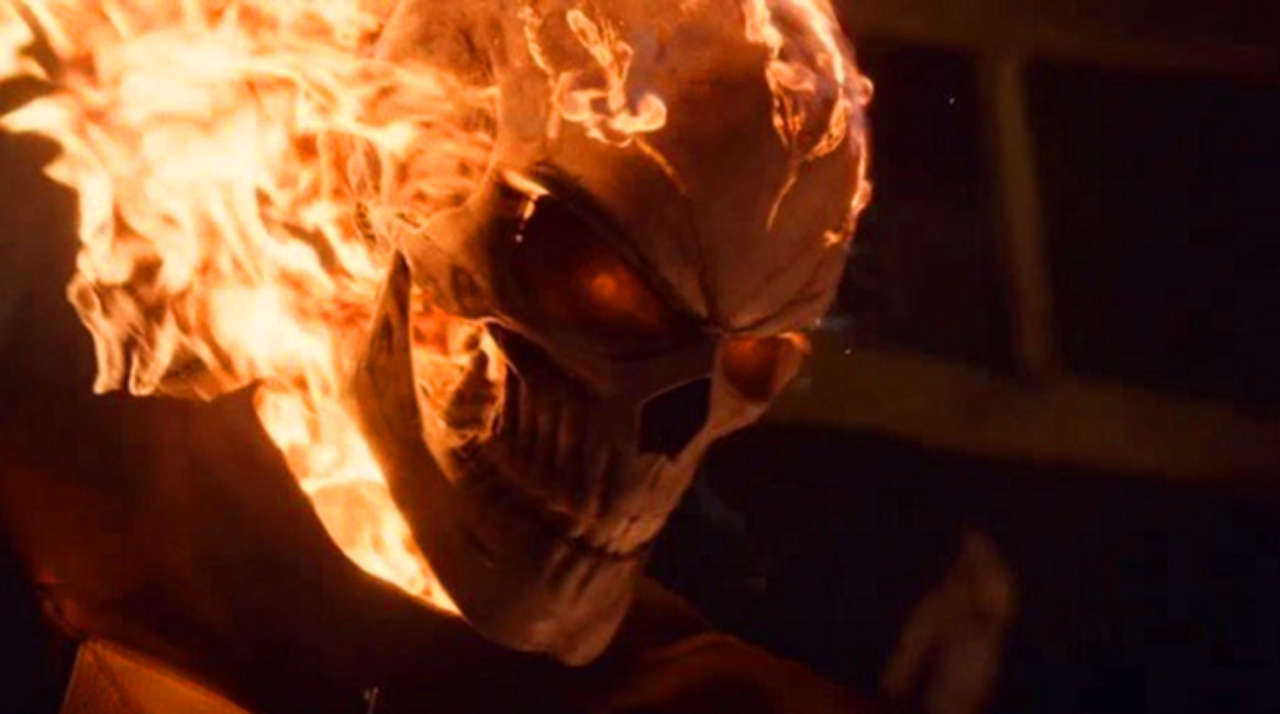 Good evening, geeks and geekettes! Spring seems to have stubbornly arrived, and with the coming of the warm weather are some of the better comics titles out there! We have some of the industry’s heavy hitters coming back, as well as some monumental, essential issues coming your way! Let’s just dive right in this Easter Fool’s Day, and see what’s what…

Since its 2012 debut, Saga has remained one of the comic industry’s freshest and most beautiful titles. This intergalactic epic for the ages, continues to be weird and gorgeous and relevant. The fugitive interplanetary family at its center has been through so much loss and upheaval, it is nice to see them somewhat settled on none planet for a bit.

Horned Marko and his winged bride, Alanna enjoy a “date” complete with a scandalously explicit first panel. These two are still crazy for each other after seven years and it shows quite “fluidly”. Meanwhile, Hazel is being trained by her latest babysitter — prison escapee and trans woman, Petrichor and danger stalks royal turned jaded turncoat Prince Robot and his journalist allies, the snarky lovers Doff and Upsher as an old favorite returns looking …considerably different. Issue #50 is as full of joy and strife as ever and the consistency of have the same writer and artist seven years later keeps the quality high. Brian K. Vaughn has authored some great Image titles, but Fiona Staples’ artwork continues to bring these unique characters to life. Saga deserves its beloved status just as much today as it did almost seven years ago. 5/5 Bibles.

Disclaimer: I’m more of a Marvel/Indie girl, in the long run — but I can’t resist the lure of Gotham City. With that said, I was excited to read Mother Panic: Gotham A.D #1. I’d enjoyed the original series, but since this is a new take on the character, I was interested to see how i stacked up. While it had its moments, the story — written by Jody Hauser — didn’t catch my interest in the way that the original did. For a brand new reader, or someone who has a casual acquaintance with Batman’s beloved city, it stands up. 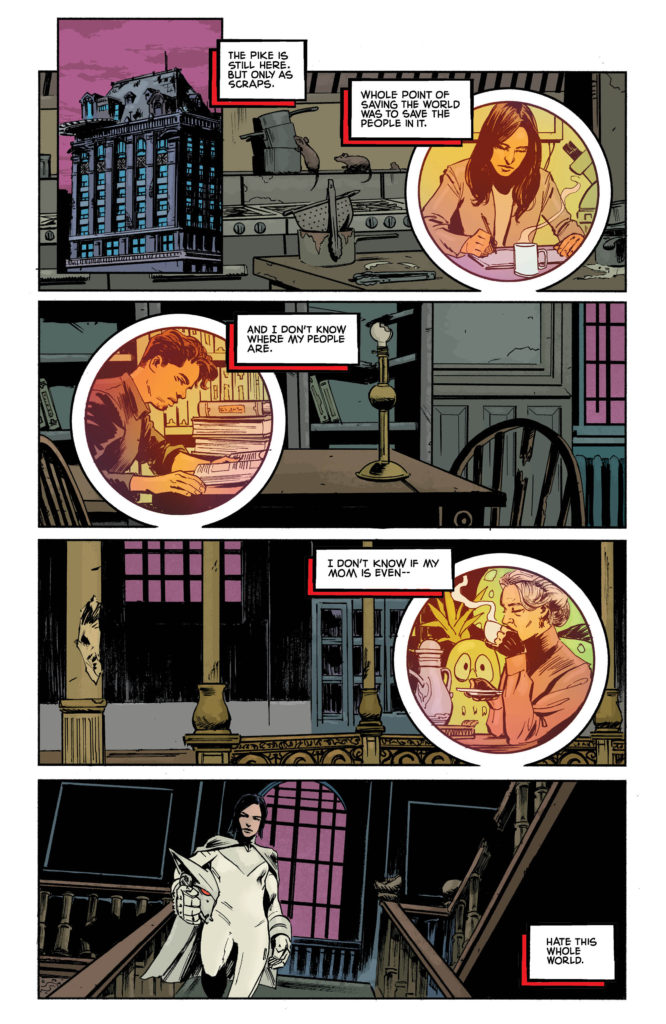 Ibrahim Moustafa‘s art is striking and bold, making it a visually stunning piece. Set in the time after the Milk Wars, Violet is back, but not really back. She’s dealing with a new timeline and familiar faces. Because I’m a fan of Young Animal and their comics’ take on familiar characters and settings, I’ll keep reading, if only to see where it goes. For me, the most compelling thing in this new Mother Panic comic is the appearance of the Joker – broken and crazy as he is. Oh, and there’s a Monty Python reference which automatically gives it an extra bible. Whether you’re a new or old reader, this one’s worth a read, especially if you’ve missed out on all of the Young Animals books up to this point. 3.5/5 Bibles.

With any seminal issue, you hope that who ever is in charge of the story at that time will push the character into a direction that will last for the next 100 issues. Case in point, in Uncanny X-Men 300, we saw Magneto’s acolytes; in Amazing Spider-Man 700 we watched Peter Parker  “die” and Otto Octavious take over his mind.

So with Daredevil 600, writer Charles Soule and artist Ron Garney have take the Man without Fear into a new direction and it makes me wish I would have kept up with this run after Mark Waid and Chris Samnee, we see Wilson Fisk as Mayor and Murdock as his deputy Mayor and with Fisk as Mayor all superheroes have been outlawed. There is a lot to cover in the issue, but to quickly (he said ironically) wrap up this issue, all the street level heroes have been arrested, the beast from the Shadowland storyline is trying to make its way back to New York and the Hand have once again tried to assassinate the Kingpin which leaves… dun dun duuuuuuun… Matt Murdock as acting mayor. 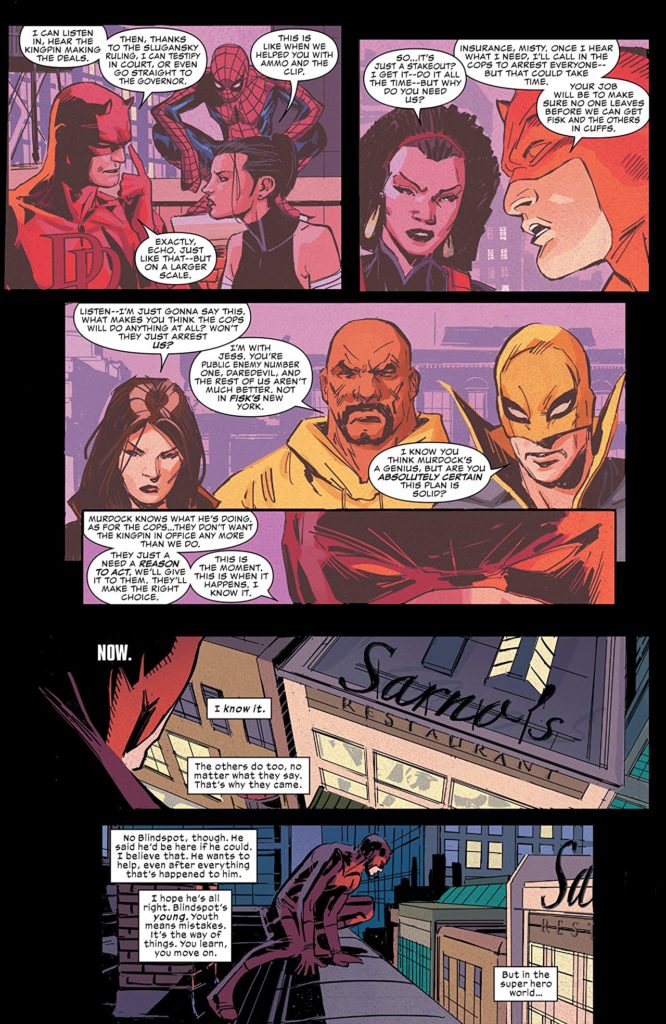 Charles Soule is an amazing writer and he takes Daredevil into a whole new direction. How will a Matt Murdock survive being the Daredevil AND the Mayor?! It is a long worded issue, but totally and absolutely worth the read. It actually makes the $4.99 price tag actually worth it. Ron Garney’s artwork is as beautiful as ever. It is as crisp and clear today as it was nearly 20 years ago when I was fawning over it when he was drawing Captain America with Mark Waid. 4/5 Blind Bibles.

After a break of nearly 5 years we finally get more of Valiant’s occult-flavoured hero, Shadowman. One of the original Jim Shooter-created Valiant heroes, he’s been out of action for a couple of years since his excellent Valiant relaunch series — “trapped in the Deadside”, as people say — but now returns under the superstar stewardship of writer Andy Diggle (Green Arrow: Year One, The Losers, 2000AD) and heavy-hitting rising star artist Stephen Segovia (Dark Wolverine, Action Comics, Ninjak) …and not a moment too soon, with his voodoo-powered ally Lady Mambo nearly overwhelmed by Louisiana’s rising tide of Samedi cultists and swamp monsters. Very serious stuff, indeed.

After years trapped in the Deadside by Master Darque, Shadowman emerges from a portal with his powers unstable and his loa (voodoo spirit thing that he gets his powers from) extremely pissed off. This staus quo is a perfect jumping on point, which also distills the character’s core mythos and expands the Valiant universe’s recently-neglected supernatural lore. Diggle already has the Louisiana vodoun patois down; and Segovia’s thick, inky yet defined lines and big panels fill the book with a detailed gloom and an action-filled murkiness which distinguish the book grimly from most of the superhero fare available. For fans of old Shadowman games and comics, for sure, but also new readers who love dark and horror comics, Valiant continues to be the publisher I recommend most often, and Shadowman #1 is my latest reason why. 4/5 Years in the Wilderness.

Mmm…Spoilers ahead! Beware and enter at your own risk!

What makes Ghost Rider #1 such a good read? Well for starters, it begins how a lot of books end (hell, how a lot of series and events end) : Johnny Blaze dead, thanks to Mephisto. And this is where our story starts. With Blaze and Ghost Rider together, SEPARATED. In hell. Christopher Sebela‘s script does a great job of establishing the relationship between the Rider and Blaze. It’s interesting seeing the Spirit of Vengeance realize that he doesn’t have a need for Johnny anymore and in return, seeing Blaze scramble for reasons and what to say to convince him otherwise.

This is also one of the more interesting takes on Ghost Rider, and hopefully the series continues with this dynamic. Phil Noto‘s art perfectly pairs with the strong story, in large part due to his great facial expressions. Not to mention the issue is heavy on action, and even has a great Mad Max-like chase. There’s enough action and excitement to go around with this issue. My only real gripe is the stereotypical depiction of hell. Minor gripe, really, just more of the same look and palette. Hopefully the imaginary, hellish environment changes in the next few issues. 4.75/5 Smoking Bibles.