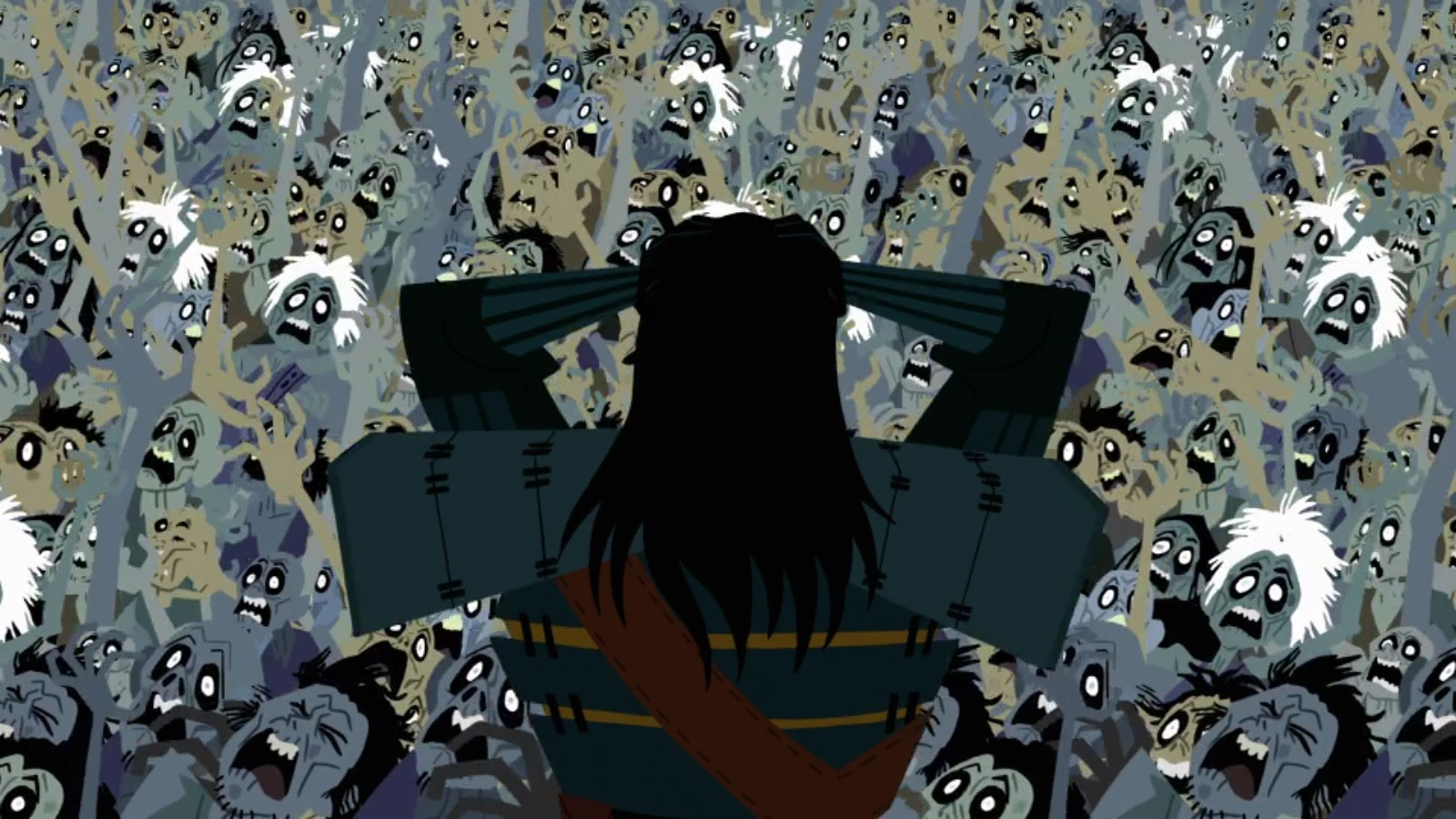 I was basically raised on cartoons written, directed, produced, and created by Russian animator Genndy Tartakovsky. I still quote Dexter’s Laboratory to this day (“Omelette du fromage!”), his Star Wars: Clone Wars series actually had you liking some of those filler characters George Lucas seemingly shat onto the screen during the dreaded prequel trilogy, and I remember seeing The Powerpuff Girls Movie in theaters when I was 18 and feeling like a total creeper because every other person in that audience was either a soccer mom or a very young boy or girl.  Samurai Jack was peculiar for me since I don’t remember watching a lot of it while it was in syndication, but I’ve always adored the characters and the premise.

Season five of Samurai Jack is noteworthy for several reasons. The last episode aired in September of 2004. Now, twelve and a half years later, we’re getting a new season of the show rather than a reboot. For years, Tartakovsky attempted to get a Samurai Jack full-length film made but to no avail. Season five is Jack’s final sendoff. The original series also aired on Cartoon Network while this new season made the jump to Adult Swim. No longer tethered by the sensitive eyes and tender imagination of a younger audience, Samurai Jack can finally breathe creatively in a more adult environment to give fans not only a proper evolution of a beloved character but also closure that wouldn’t have been possible otherwise.

A shaggy and bearded Jack covered in head to toe in full Japanese samurai armor with state of the art midi guns and hand pistols replacing his trademark sword blasts through his surroundings on a thunderously weaponized motorcycle. Jack still saves those in need, but he does so in a way that reminds you of a caged animal; it’s more of an instinct these days rather than a code of honor. Jack has been trapped in every time period except his own for the past 50 years. Time travel has sterilized his ability to grow older as Jack no longer ages. He is haunted by feeling like he let the people of his time period, specifically his parents, down by not returning sooner. Meanwhile, seven female assassins are trained from birth to honor Aku and slay the only samurai who is a threat to him.

A pair of blue females, one possibly an older teenager and the other a young girl, fleeing from a horde of black beetles with red eyes is the opening scene of the new season. The two girls communicate through the zapping and beeping noises made with the antennae on their heads. Time worn Jack on a motorcycle barges in and uses the battle as a violent statement and rides off into the sunset without a single word to the two girls. Jack is even more desperate than ever to return home and is on the verge of losing his mind to guilt. He never has a moment’s peace. Whenever things are quiet or he’s trying to eat after a long day, Jack is tormented by visions of his parents being burned alive or people from his town drowning simultaneously in the river he’s currently drinking from. Aku’s minions have now become an escape from his own conscience.

I was able to watch some of the first season of Samurai Jack before the new season and it stills holds up pretty well for a series that turns 16 this year. The new series still relies on action and visuals while being light on dialogue and there’s an obvious upgrade in the animation, but the biggest difference is the music. The music of the original series wasn’t bad, but it was also very simple. Tyler Bates not only brings a more complex sound, but makes everything feel bigger and more memorable. You are more invested in the horrors in Jack’s head and the assassins who live to take his life because of the powerful soundtrack that Bates provides. There’s a video of Genndy Tartakovsky and Tyler Bates making the music for Samurai Jack and Tartakovsky goes through the episode and verbally offers music cues and basically beatboxes for how he wants everything to sound. It’s pretty amazing.

A series like this was meant for high-definition and widescreen though. What’s really cool is that Tartakovsky knows how to play with the shape of the black lines utilized with widescreen to maximize the action; whether that’s making a little black box around a motorcycle wheel to highlight built in spikes coming out of it or morphing around Jack in a T-shape as he extends a staff that expands into a trident-like spear on one end and utilizes electricity on the other. There is so much more vibrant color injected into the new Jack compared to the old one, as well. This episode pays particular attention to the fall season as foliage covers nearly every color over the course of 22-minutes. The animation is much more smooth and polished as fluid movements just slide with ease from scene to scene. The backgrounds are also just gushing with color, as well. Jack may be miserable, but he has never looked so bright and glorious.

The agony Jack goes through internally is animated so beautifully. Leaves fall into a stream as he pauses to drink from it. One leaf turns into his father as he shouts to Jack and is helplessly taken downstream. Another leaf becomes his mother and it does the same before all the leaves of a tree fall into the stream and Jack sees hundreds of zombified bodies calling to him and whining at him for not saving them sooner. The highlight of the episode is the main villain Jack faces off against this episode: a flamboyant Sammy Davis Jr caricature named Scaramouche the Merciless that can scat a sword into doing his bidding and summons giant rock monsters with his jazz flute. Scaramouche is voiced by the one and only Tom Kenny, the very same voice actor who has given us Spongebob Squarepants, The Ice King from Adventure Time, the narrator from Powerpuff Girls, and various characters from other Samurai Jack seasons. The facial expressions this season are also extraordinary. The incredible action, beautiful animation, and gorgeous colors along with the facial expressions make every stunning frame of animation unforgettable.

Samurai Jack is back and arguably better than ever. With the exception of some masked women being shot in the eyeballs with arrows, we’ll have to wait until next week for things to get a bit more adult. In the meantime though, Jack wanders the post-apocalyptic wasteland of an Aku-dominated future in excruciating style as season five of Samurai Jack manages to outdo the sheer and utmost badassery it’s already known for in absolutely every way. 5/5 Samurai Crippling Fever Dreams

New episodes of Samurai Jack air on Saturdays on Adult Swim at 11pm.