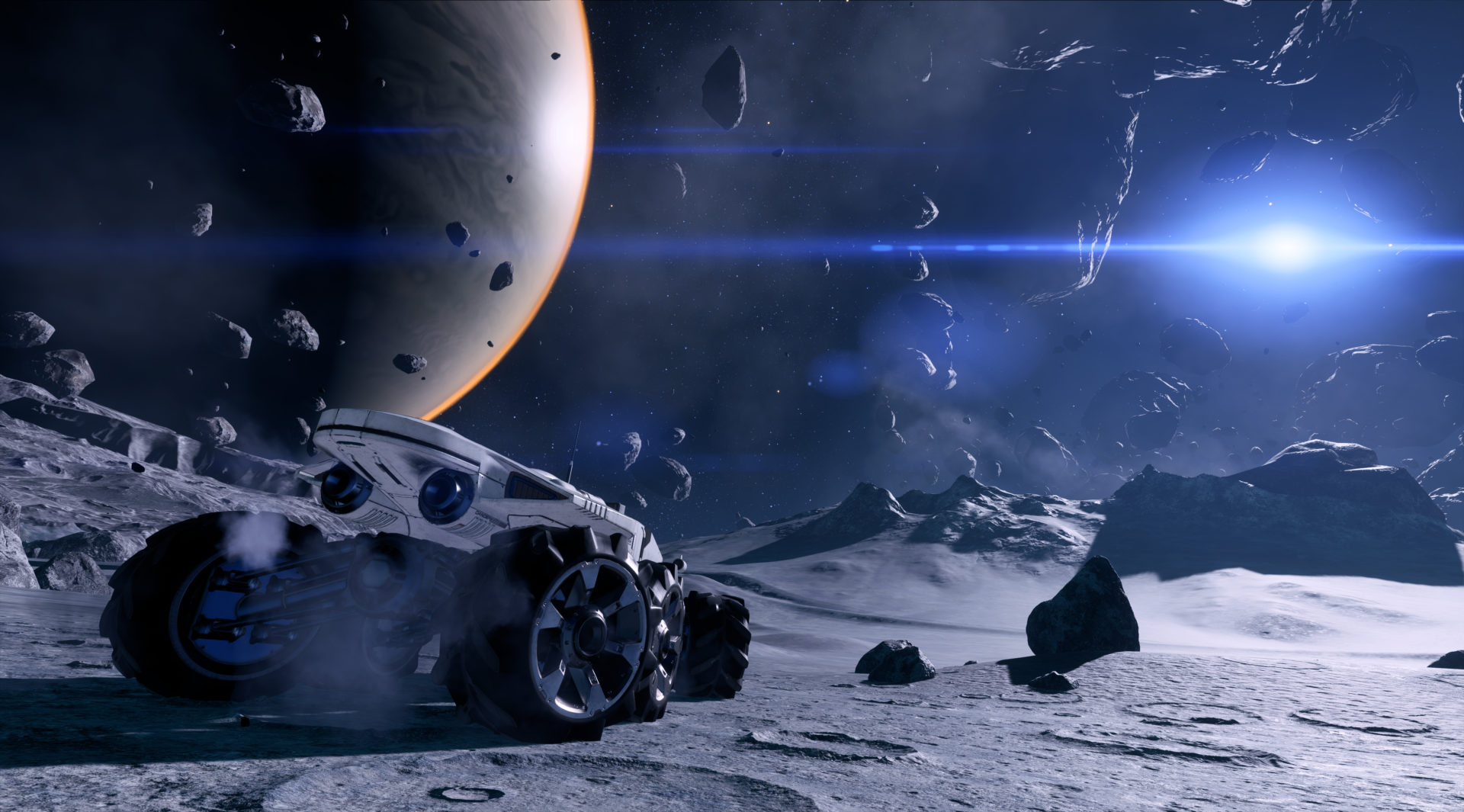 Exploration and discovery comes to the forefront of Mass Effect: Andromeda, the latest chapter in what many argue to be the greatest video game trilogy of all time. Longtime veterans of the franchise know that space exploration is what made the original Mass Effect such a special gameplaying (some would even venture to say “life-altering”) experience, and those roots return with Adromeda. Not only are the new planets’ visuals ramped up with the use of EA DICE’s Frostbite 3 engine (see Dragon Age: Inquisition), but players are sure to feel full, real-time immersion when looking out the window into the atmosphere of their “New Normandy” — the Tempest space shuttle.

Since BioWare hasn’t been too coy the past several weeks leading up to Mass Effect: Andromeda‘s March 21st release date (March 16th, for those with earlier EA Access), there’s a milky way of information to go around. That said, if you haven’t yet partaken in the 6-level Andromeda Iniative, you should; if not, this preview should make the “Mass” Infodump preceding the release all the more easy to consume.

GUARDIANS OF THE GALAXY

In the Heleus Cluster your Pathfinder–Scott/Sara Ryder–will explore worlds, planets, moons and starships that are not only rich in terms of size, but full of wonderful eye-popping ambient life, as well. Each hub in 2819 offers many unique characters (Andromeda‘s 1200 is said to be nearly twice as many as ME3) to meet, friend and squabble with; fully-dimensional landscapes and hazardous climate/weather-impacted environments to explore and analyze; and plenty of both optional and critical storyline quests that will take several hours to enjoy (hell, even the tutorial has side-quests!), since narrative has always been the strength of the Mass Effect saga.

Enjoy, I say, if you don’t mind everything going to hell; maybe not the hell that was the end of Mass Effect 3 (and I’m not talking quality, since I enjoyed by paragon-ending-for-my-240-hours-of-being-a-renegade just fine), but a hell where planets referred to as “Golden” just shouldn’t be. Play the single campaign for an hour or so and you’ll know what I mean.

At least there’s the safety of the ship. The Normandy was arguably the most popular character to grace the original Mass Effect trilogy other than Commander Shepard; our biggest ally, a bedroom, base, locker room, lounge and command unit, all the same. But the sleeker Tempest improves on immersion, eliminating load screens and painfully slow elevators and giving us…windows! With actual views of Space!

Moreover than any cosmetic upgrades, you can modify abilities and skills in the atrium’s holographic interface, and have a garage to park and upgrade your 6-wheel, all-terrain Nomad rover–which screams a 100x better than the previously frustrating Mako–traversing you around planets faster than a Boba Fett hover pack ever could.

Although the traditional cover-based, third person shooting is still there in Andromeda (and all the more effective with a wide range of new, more powerful sniper scopes), combat will feel more kinetic, vertical and distinctively stylistic than ever before. In fact, there are several different styles of earned battle profiles — four of which can be switched as “favorites” in the midst of war. These freeform profiles (Soldier, Engineer, Adept, Sentinel, Vanguard, Infiltrator, and Explorer) will be rewards for the gameplay style choices you make throughout Andromeda, each coming with their own unique visual cues. Biotic combos are easier to pull off due to new melee options at your disposal (i.e. Cryobeam ‘n Lance clean-up! Shock ‘n Flame-on!), and environments can even be used to your advantage.

RPG options and upgrades are thankfully robust, too. Players can craft, mod, consume, and customize weapons, ammo, and various augments thanks to blueprints that require a certain level of 4 different salvage materials — all which can be found using a scanner. Think the ray of orange light found in Arkham City‘s “Detective Mode” coming from your Apple Watch. Each weapon has three different tech categories (Milky Way, Heleus, and **SPOILER???** Remnant) in a 5-tier upgrading evolution. Not counting credits or salvage, Ryders will have a 950 item carry limit that can increase as Pathfinders increase their levels.

With the fan favorite Loyalty Missions returning, your team will be more promenent in Mass Effect: Andromeda than ever before. Co-op Multiplayer also promises to feel more team-orientated, and offers a direct impact to player upgrades in Single Campaign–although you don’t have to worry about your MP experience affecting your ending (see: Mass Effect 3). Rewards include mission funds, used to buy multiplayer items and acquire single player Pathfinder rewards that can help with crafting weapons. With 25 character kits at launch (from both Milky Way and Andromeda galaxies), 40 unique weapons, zero class restrictions, boosts and upgrades, Multiplayer might give the game even more longevity than the single narrative already promises.

There’s one common element between both Single and Multiplayer modes: both effectively utilize the distinct active and passive skills of your squadmates. As witnessed in Destiny‘s “story mode”, co-op Strike Team Missions can even be called up from the Tempest. Cora Harper supports with biotics, Liam Kosta is the close-ranged colonial specialist, Peebee is the adventurous biotic-destabilizing Asari, Vetra-Nyx is a flirty street-smart Turian, Nakmore Drack is a Krogan who pounds with heavy ammo and armor, and the recently revealed Jaal is a diehard Angarian ready for revenge.

Like the aforementioned Dragon Age: Inquisition, your Ryder can order and direct teammates to defend specific parameters, attack specific targets, pull in to defend you closer from harm, and (as enjoyed in Final Fantasy XV), team-up for powerful combo attacks.

What makes all those moments of collaboration during combat specifically awesome, however, is the vast amount of squad banter. From what I’ve watched and played so far, there appears be a Star Wars-level of sarcasm and humor in the dialogue written by Chris Schlerf (Halo 4). Fans of Mass Effect 2 and 3 and the Dark Horse Comics (Redemption, Incursion, Inquisition, Evolution) will be proud to see past writer Mac Walters on-board as Mass Effect: Andromeda‘s Game Director.

Perhaps Mac’s promotion is the reason behind MEA having more dialogue than ME2 and ME3 combined. Better, no conversation choices seem nearly as black and white as the paragon/renegade stuff of the past (instead, heart/head/professional/casual/occasional “impulse”), so your Pathfinder can be someone who doesn’t sound like they woke up from a 600-year coma–even though they did.

I couldn’t leave my most beloved gaming franchise without talking merch! In addition to both Deluxe and Super Deluxe Editions of Mass Effect: Andromeda, there’s also a Nomad ND1 Model Collector’s Edition Bundle that goes for $160 with the regular disc, or $170 with the Deluxe version of the game (the Remote Control version of the Nomad goes for around $200 without the game). The diecast model Nomad ND1 has a fully detailed interior and illuminated control panel, powered by AA batteries. If only I had the damn room. 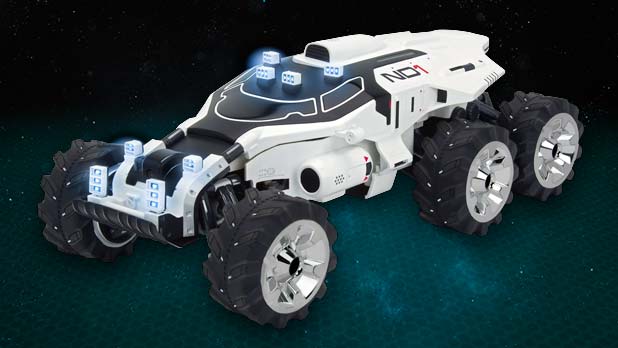 Then, there’s Loot Crate. The Mass Effect: Andromeda Limited Edition Crate, thus far, only promises “exclusive Mass Effect: Andromeda apparel, collectibles and home goods”; but those lucky enough to score the first Limited Edition Mass Effect Crate are betting it’s gonna be great once again. Since they only asked for a T-shirt size this time out, there likely won’t be a hooded sweatshirt loaded in the box. No fear, N7; the new Official Hoodie from BioWare is actually in-game. That said, it took me about 30-seconds to pull the trigger on the Zip version.

For those who wanna snuggle up on a cold day on the couch in their new Pathfinder hoodie and need something new and titillating to read, there’s the prequel novel, Nexus Uprising, the first of a trifecta of novels set to tie in with the game. While not much is known about the story from Jason M. Hough and K.C. Alexander (released the day of the game), the premise is set to follow the how and why things didn’t go as planned during the initial arrival in Adromeda. The $8 paperback will explore those other arks of non-native peoples and how they got there. 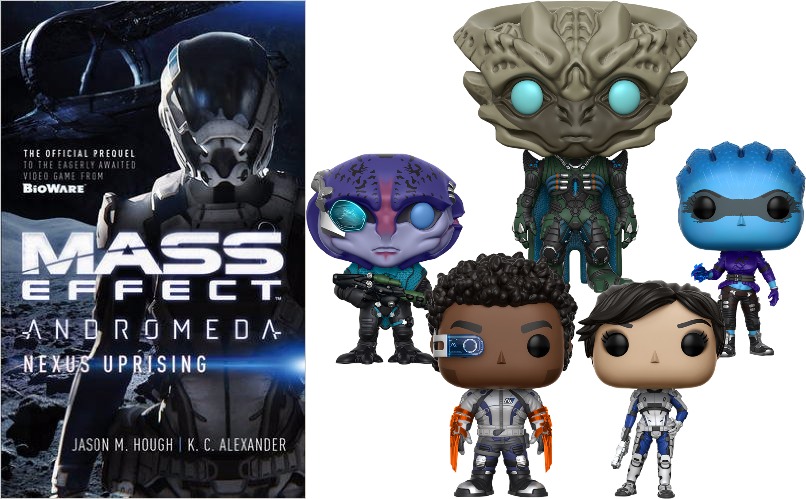 Finally, it’s America’s favorite new pastime: POP! Vinyl dolls. Since I own Garrus, Tali and Grunt from the previous trilogy, this writer was most attracted to Jaal, Peebee, and The Archon — although the strength of Andromeda will determine how far I go with the rest of the collection.

EA/BioWare’s Mass Effect: Andromeda is set for launch March 21st on PC, PlayStation 4, and Xbox One.