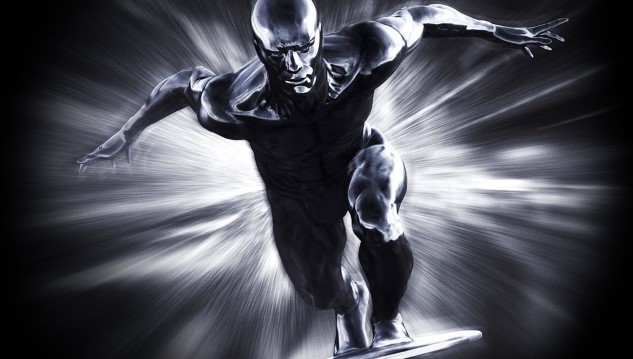 Okay, so Sandman In Space as illustrated by Tim Sale is a pretty good pitch for a book, but after this mini-series, it’s been done. I mean, it’s literally none of those things, but Silver Surfer: Black, by Donny Cates and Tradd Moore, makes the pitch redundant nonetheless. It’s a dreamy, cosmic head-trip, and it took me 3 full pages, checking the credits after each panel, to believe the art wasn’t by Tim Sale.

Norin Radd, the Silver Surfer, has been cast into a black hole during a battle with the children of Thanos. This is where we find him; falling through an endless void of darkness, buffeted by the forces of space-time, and beset by his own personal torment. He uses the power cosmic to navigate, shape, and affect this new pocket galaxy he is trapped in. Sounds pretty Sandman, right? It is. 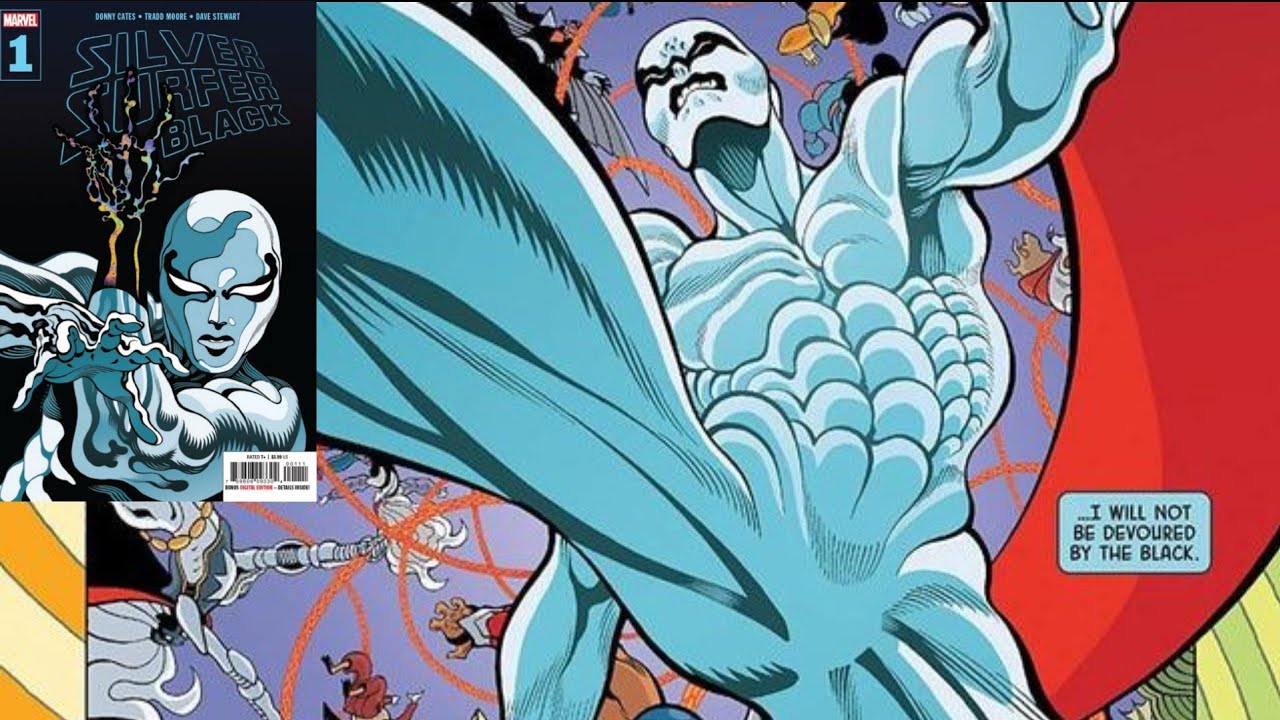 Spinning out of his run of Guardians of the Galaxy, Donny Cates (Redneck, Babyteeth) is comfortable here, effortlessly spinning a tale both poignant and action-packed – no mean feat considering how much is just an internal monologue. For this, though, we have co-plotter and artist Tradd Moore (The Strange Talent of Luther Strode, Secret Avengers) to thank; his fluid, globular, and bold style reminiscent of the aforementioned Tim Sale, but also Moebius, Marc Hempel on Sandman, and Steve Ditko’s work on Doctor Strange. It’s pretty cool stuff. Aided by a bold color palette provided by Dave Stewart, the art is both easy on the eyes, and leaps off the page. 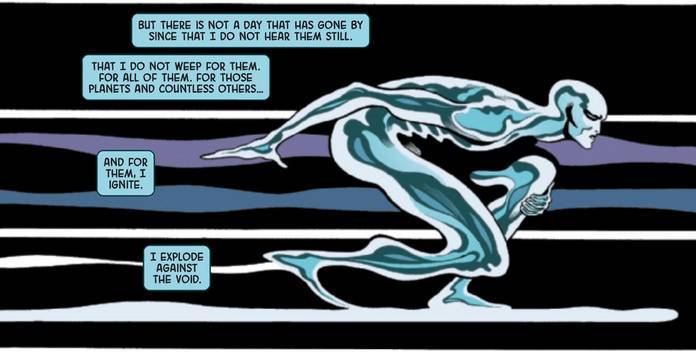 At the risk of being too hyperbolic or running out of clichés, I would say that this book is basically perfect. New readers or devotees of Marvel’s Cosmic titles will both find this title an excellent read, and the self-contained story in a mini-series format will appeal to Marvel burnouts who don’t want to be forced to buy every title printed for three months god-damned months or so every year just to understand the story in the title I actually started collecting. Grrrr. But I digress. Buy this excellent book. 5/5 “Let There Be Lights”.

“The greatest detectives hunt our greatest threat!” is the tag for DC’s 6-issue mystery thriller by former Marvel architect Brian Michael Bendis and teaming with Alex Maleev. This has been a simmering story over on Action Comics, with Leviathan dismantling covert-ops organizations Kobra, Task Force X, DEO, Spyral, and A.R.G.U.S. Will this be another slam-dunk for the creative duo, or rather an exasperated gasp into the comic book summer event foray?

Leviathan starts with Batman and Lois Lane running into each other in the wreckage of Odyssey, A.R.G.U.S. latest project, where they find a beaten and demurred Steve Trevor. He recounts the events leading up to the destruction before going full on psychotic and shooting at Lane and the Bat. Consequently being put down by Green Arrow with a non-lethal, but painful, arrow. After which they stand around talking about the who and the why. 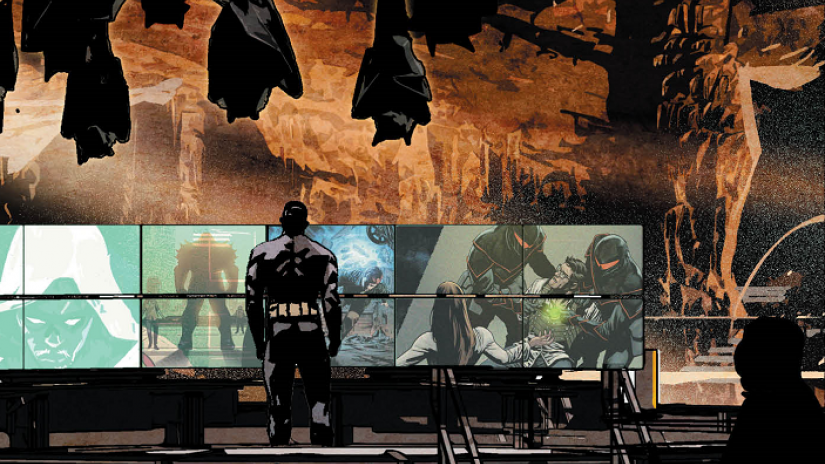 As far as event kickers go, this definitely whets the appetite. Like, who is really behind this? Who was that in the shadows? And who the hell is this Leviathan? Bendis brings his David Mamet-lite dialogue that he was well known for in New Avengers for with Maleev’s art working for the stark and moody atmosphere. It’s been a serviceable start by Bendis and company and with even more players yet to be introduced to story, i.e. Barbara Gordon, Manhunter, Plastic-Man, we can only eagerly await the next installment of the event. 3/5 Bibles.

Sonata #1 has the looks and story to truly suck you in and not want to leave. The story by David Hine and Brian Haberlin keeps you interested. There is lore established that gives you background on the situation.

Though the story is great, the comic is really carried by the art. Haberlin does a phenomenal job painting such vivid pictures of the environment that they are in. It feels like I am inside the world with them. The art just matches the story so well. Right away, you are brought into a situation that you want to see get resolved. Between meeting different races/tribes, exploring the world or flying around on a Thermasaur, Sonata will keep you interested from start to finish.  4.75/5 Interplanetary Travelers Agree.

Mark Waid and Kwanza Osajyefo wade into cautious waters with Ignited. The premise of the story asks the question, if you survived yet another school shooting and you were given super powers… what would you do?

I knew nothing of the book, just that Mark Waid was writing it (who I love), but the first page isn’t some kind of action shot or set up; it’s a letter from the creators letting us the readers know that they wrote this book with the upmost care knowing full well the trauma these events have on the survivors. This book takes on alt-right talk shows, gun rights, gun safety and is unapologetically liberal. Waid and Osajyefo’s writing is straightforward and precise. 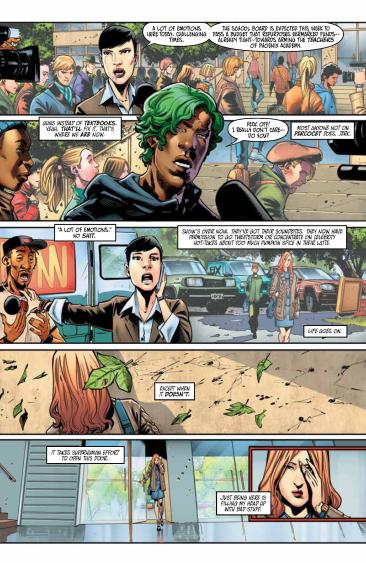 The art by Phil Briones is good, but not great. He takes risks with his art and the story and at times, it pays off. He has a Bryan Hitch style that works but for the majority of the book his art is just off the mark; you can’t help but feel that, with a book of this magnitude, they should have found a better artist.

I am very intrigued to see where this book goes and just how much bitching and complaining the comics-gate community does. 3.5/5 Bibles.