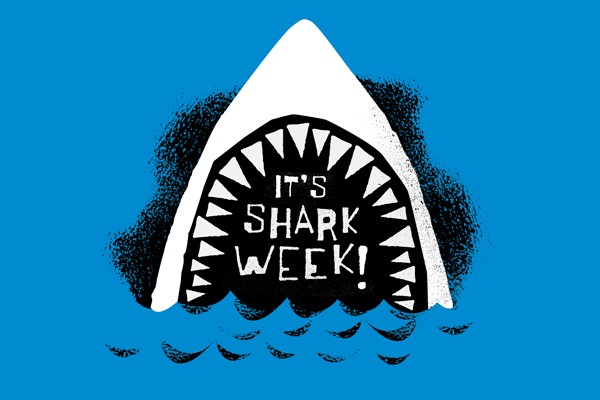 Actually in this video, there are nothing but fictional sharks.

Well brothers and sisters, it’s Shark Week.  And that means it’s time to put your personal life on hold and devote all of your precious free time to “Chompie” (thankfully back this year after his mysterious absence in 2011 and a surprisingly cheerful, humorous host as he or they introduce a bevy of shark related programming.

This years line-up includes everything from “Impossible Shots” which is, you guessed it, an hour of footage acquired with great personal risk to the people involved in filming it, to Jaws‘ lasting impact on humanity’s view of sharks, to the defense of efforts of shark attack survivors who have developed a bizarre manifestation of something like Stockholm syndrome. But perhaps the most fascinating addition to this year’s shark week, at least in the ever authoritative opinion of this pro-shark Sister, is Sharkzilla.

To celebrate it’s 25th anniversary, the good people behind Shark Week have constructed a replica of the largest fish to ever swim in Earth’s oceans: the 60 ft. long, 100,000 lbs. monstrosity Megalodon, that could literally chomp a T-Rex in two as easily as an eight year old human demolishes a Twinkie.

Fortunately, this prehistoric nightmare was reconstructed with inorganic materials, inculding steel for the teeth and some seriously tough fabric for the body, instead of actually be resurrected from DNA contained in the bloodsucking body of an ancient mosquito preserved in amber.

We don’t need a Jurassic Park situation on this year’s spring break, thank you very much.

The only actual remains of Megalodon are a handful of the creature’s 250 serrated teeth.  They’re seven inches long and to say they’re super sharp is like saying Mark Zuckerburg has a little bit of disposable income.  These teeth are not just incredibly rare, but also deadly weapons; dragonglass ain’t got nothin’ on these chompers.  If they could only get some in Westeros.. thennn.. you better watch yourselves White Walkers, because you’ll be dead and not coming back this time.

Much as I love sharks and particularly this one who lived alongside the dinosaurs (another obsession of mine; I know, I know), I must say to the wonderful people at Shark Week that I cannot support their decision to have their mechanical replica of Megalodon chomp on a beer keg.  That was a terribly unfortunate waste of perfectly good beer.

Hopefully it was only “Natty” or “Beast” and not something more appetizing (Editor’s note: Uhh.. Landshark?).

Witness the alcohol abuse for yourself here.