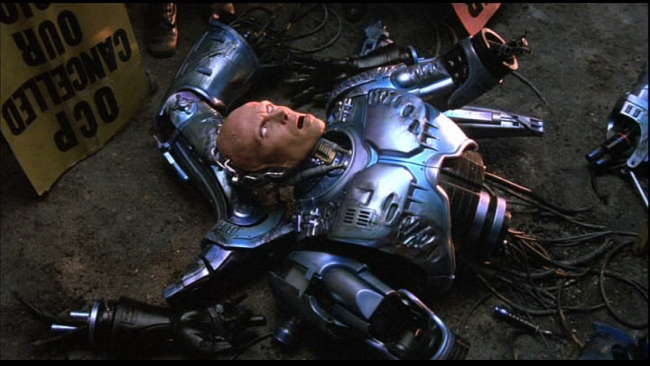 Following the noon screening of a very special “director’s cut” of Robocop at the LA Times Hero Complex Film Festival, Peter Weller quickly whisked a note to his manager: popcorn, now. In addition to his near-40 years in the biz, it was now apparent that the 1987 film’s star did as much movie-going. And he certainly had no problem admitting that this craves for Orville Redenbacher were the easiest way to annoy his significant other.

Besides locking away his buttery habit, perhaps Weller’s wife kept him from viewing his own films, too.

Weller hadn’t watched Robocop in almost 15-years just up until last week at another screening in Dallas. He forgot just “how profound the writers [of Robocop] are; they’re not only funny with those extraordinarily acerbic social obsessions — like board games called ‘Nukem’ — [but] the movie starts off with a last bastion hold out of apartheid against black South Africa. That’s the first damn thing you see in the film [that] is essentially white suppression about to go down the toilet.”

Weller — who recently guest starred in “Dexter” and guest directed a couple episodes of “Sons of Anarchy” — also admitted that he was finally able to see past all the initial hoopla of Robocop, appreciating the film for all its anthropological significance.

• Weller is currently directing the A&E drama “Longmire,” starring Robert Taylor (the “second bad guy” in The Matrix), whom Weller’s wife describes as “juicy” — or ruggedly handsome for all the uncomfortably inclined.

• Most shocking (okay, maybe not), Weller spoke passionately about early Italian Renaissance, especially paintings by Giotto from the Scrovegni Chapel in Padua. The actor’s enthusiasm for such a potentially “off” topic only further displayed his love for the earliest forms of visual storytelling.

• Filming Robocop was the most disciplined experience Weller has ever had.. doing anything. He worked with the head of the film department at Juilliard every day for six months to perfect the personification of the titular character. And even when he was away, Weller listened to tapes on a walkman.

• Weller gave in to some rumors of playing an alien in the next J.J. Abrams Star Trek. Though, the actor did say he would never spend another 6-and-a-half hours in a makeup chair ever again.

Upon Weller’s departure, festival goers were supposed to be surprised by the festival appearance of legendary special effects makeup artist Rick Baker! But, no, Weller just had’a tell us..

Baker mentioned that his most recent project, Men in Black III, was particularly fun due to the sheer array of aliens – 127(!!) – that he got to create. “What’s cool about Men in Black is [getting] to do a little bit of everything: likeness make-ups, crazy aliens, puppets, and animatronics. They’re just a blast to work on.”

Baker’s career interest began by creating some of these monsters in his childhood bedroom. At 16, he used barber scissors to trim “werewolves and things” and still uses those same “magic” scissors ‘til this day.

And despite those crazy monkeys from The Wizard of Oz flying around his office display, Baker claims the old Universal horror films of the ‘40s steal a greater piece of his heart. His primary inspiration was Jack Pierce, then head of the Universal makeup department, who created such classics as Frankenstein’s Monster, The Mummy and the Wolfman.

Perhaps the coolest bit from Baker – whose most popular work was arguably Michael Jackson’s “Thriller” music video – was catching him exhibit a sense of wonderment at his own work. Reminiscing about the “Thriller” dance for the first time, Baker said, “‘Oh my god, look at what I’m witnessing here!’ It’s amazing [that] people will pay money to see this and I get to see this for free.”

As great as it is to see a Hollywood success become so humbly appreciative of his own magic, Baker’s resume certainly speaks for itself — even if Baker doesn’t have an agent. “I like when people come to me and ask me to do film. I don’t know how people manage to get to me, but [fortunately] they do.”

Except for Ed Wood… Baker understandably had no problem dialing Tim Burton’s number on that one.

-Part Deux of our coverage from the Hero Complex Film Festival coming soon. I swear! Oops.