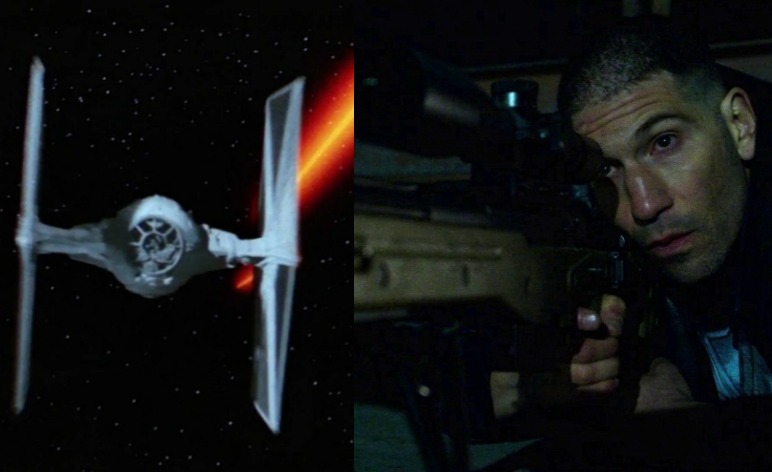 Ever since Marvel regained the rights to Star Wars in the comics space, they have been developing a lot of titles, short runs, and trying to fill in various backstories for characters. As a Star Wars fan this is all great, but they always seem to involve the Jedi or Sith or be tied to a movie. TIE Fighter #1 is a breath of fresh air, as it breaks away from that and takes a look at a part of this universe through different eyes. No famous characters, no force powers, and no movie tie-in. Similar to the game Battlefront 2’s campaign, where we are introduced to a new group of soldiers in the imperial army, TIE Fighter gives us a view from the boots that serve the Empire tasked with a specialized mission.

Overall, Roge Antonio‘s is art game is strong and Jody Houser provides a solid script to match– giving a good feel for how these troopers really feel when their helmets come off. Sounds all good right? Well if there is a downside, it would be that TIE‘s only a 5-issue mini. Did I mention there is a book coming? Well if you enjoy reading the various published Star Wars books as well, this short series leads into a book titled Alphabet Squadron that is releasing this year. This Stormtrooper will, for sure, be picking that up as well. 4/5 Imperial Cogs.

Holy shit, the art is bad. The pencils, the flat, uninspired coloring — it’s all bad. So boring to look at. Carnage is a character that gives artists a lot of wiggle room with how to make him look. You almost have to go out of your way to make him look shitty; well, Danilo Beyruth and Andres Mossa succeed. I’m singling out Carnage, but visually everything is ass. I’m deducting 3 bibles. The art is distractingly awful. Frank Tieri‘s story sets up Carnage’s Doverton Adventures Vol 2 well enough, but the book ends with a painfully boring twist that you sense coming a mile away. I really hated this read. It’s comic books; looks matter, dammit. 1.5/5 Rolls of Toilet Paper.

Occurring within the latest crossover event, Marvel’s War of Realms: The Punisher, finds everyone’s favorite lethal vigilante up against Frost Giants and Dark Elves, who have found their way to Earth after Malekith laid waste to every other of the Nine Realms. There’s absolutely no fat to this issue, which features Punisher in nearly every single scene. Marcelo Ferreira‘s pictures give everything a bang, exemplified by Frank Castle bursting into a music store in search of piano wire, with which he lops off a few heads of the encroaching Dark Elves.

I love (nearly) everything involving the Punisher, and it’s great fun seeing his unique brand of ultraviolence juxtaposed with giants, dark elves, and other assorted fantasy creatures — as well as his callous disdain of his superpowered compatriots. Gerry Duggan‘s fun story ends on a relatively small-scaled note, with Frank having taken over a busload of inmates and ordered them to protect some patients and medical staff of a nearly-destroyed hospital as they try to escape to New Jersey through the Lincoln Tunnel. Judging from the teaser image of issue #2, that’s easier said than done. Count me in. 4/5 Garrote Wires.

‘Ol Red probably ain’t dead yet, but he might be in need of a little redemption, seeing how’s some of his latest kung-foolery’s dealt him onto the other side of the card table. Duhdevil’s done found himself slaviored by one of his favorite neighborhood frenemies. One who might even be holding the moral high-ground for this here Hold ‘Em up high hand… Now, who would’ve ever thought the white Castle Frankenburger and his drive-thru killin’ Swayze would’ve ever delivered the ideologically (and morally?) superior McValueless Mealworm to the double-horned Kitchen Hellion with the Eyes of Stevie Wonderment??? And what else can one expect to go down when a crime lord’s dope-fiending-and-leathercoat-stealing thug — an ex-jarhead with a penchant for serial killing bad guys — and a chemically-blinded lawyer who moonlights as a vigilante in red tights, all wind up together in the same industrial district saferoom that’s been weaponized to Hell-and-Back? 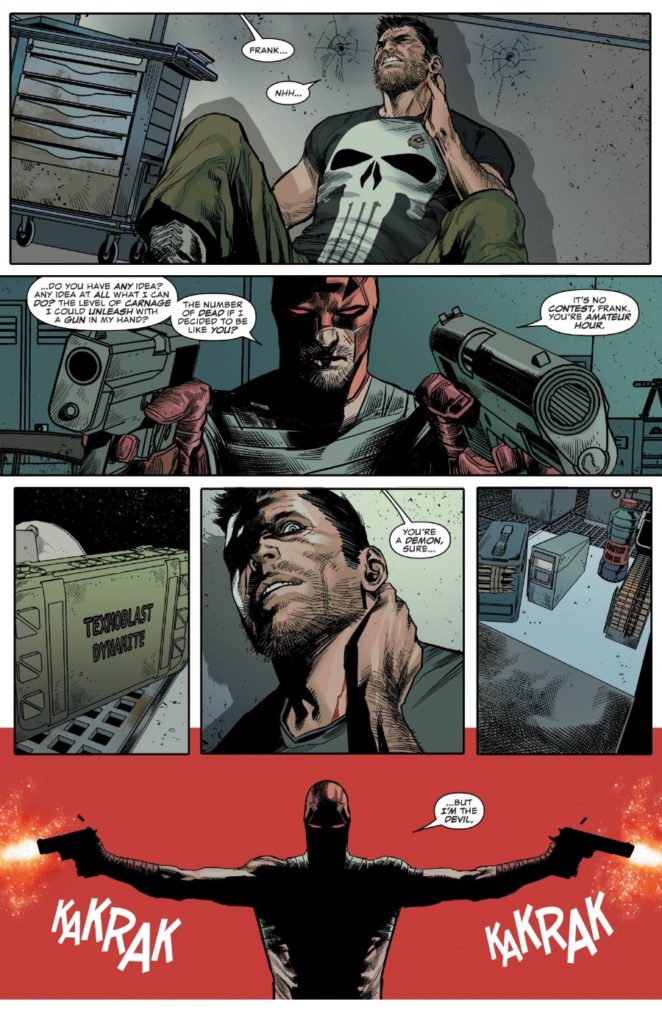 Never mind the fact that a recently-transplanted Chicago Blueboy who’s now running detective-grade for the NYPD just recently finished kicking the living shit out of ‘Ol Red on cellphone video upload. Never mind the fact that the Big Apple’s favorite madman-at-arms just recently rescued ‘Ol Red from the fuzz after he got whipped like a little bitch at a tea party wearing soiled Underoos. Never mind the fact that some ole bald, crime lording, phat phuck might be making calls to the Po-Po from the shadows, with his own sinister intentions lurking not far baloney. Just keep in mindless the fact ya gotta trio of short-fused dynamite sticks all tied up inside the same Chinese finger-prison sex toy, they’re all sweating nitroglycergrins, the whole damned shit show’s on locked and lowdown, and everyone’s a-twitching to scratch their Dirk Trigglers…

What kinda odds ya think the House’s gunna give ya on that hand? What kinda payout ya think you’ll win if everyone walks outta that (un)saferoom alive? What kinda jackpot ya think’ll be collected if everyone just bleeds right out red until they’re bone dry? Just tell ‘em the Devil made ‘em do it… 4/5 Red Skulls On Tha Devil’s Chestplate.