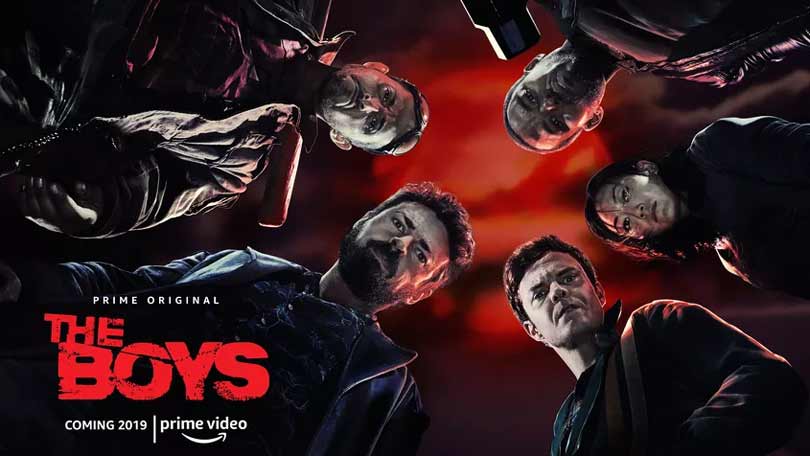 Confession time: I love The Boys. Garth Ennis‘ and Darick Robertson‘s expansive, subversive work is one of my favorite comic series ever, and I ran through the entire series twice, each time noticing little bits and references I’d missed the first time around, and grew continually impressed with the emotional beats and character growth. One of my favorite issues concerns Hughie simply walking a lost dog home. The ability to allow moments to breathe and grow at a natural pace was paramount in allowing the reader to be fully invested.

All of this on top of the copious –and sometimes hilarious– amount of sex, drugs, ultra-violence, and general excessive depravity makes it a perverse thrill. But to adapt all of that, successfully, without losing any of the edge that makes it such a unique work? We’ll have to see what producers Seth Rogen and Evan Goldberg, and Erick Kripke have to bring…

And it’s as close as it’s likely to get to a pitch-perfect adaptation; where the show deviates from the source material (certain plot-points occur much sooner, or are jettisoned completely; certain relationships are less concretely developed; and, curiously, one character is dropped completely and replaced with a series original). But the tone is the key here, and it is effectively translated. Set in a version of the real world where superheroes exist, we’re introduced first to Annie January/Starlight (Erin Moriarty), a small-town superhero from Des Moines, Iowa, as she auditions for an open spot on the Seven, the highest-profile, and most profitable, superhero group in the world. Shown around by the Deep (Chace Crawford), she’s full of excitement, nerves, and wonder…right before she’s full of the Deep.

Right off the bat, the series gets right into one of the comic’s most disturbing and creepy sequences (which, even with the omission of two other male characters, as in the comics, is still disturbing), handling it –and the emotional aftermath– rather deftly. Following that, we’re introduced to Hughie (Jack Quaid) and his girlfriend Robin (Jess Salgueiro), making the sort of well-worn small-talk that all couples make, the ribbing and jokes…right before she’s exploded by a full-speed-running A-Train (Jessie T. Usher Jr.). Some time after Robin’s death, Hughie turns down a settlement offer in exchange for signing an NDA, and is later confronted by Billy Butcher (Karl Urban), who is looking to re-form the eponymous government agency, tasked with keeping tabs on the supes, and keeping them in line.

The show looks amazing, having the scale and feel of feature-film superhero tales, while pushing the boundaries in regard to just how much violence and nudity can fit on a television screen. And that’s saying a lot. The set pieces are similarly well-shot and composed, and edited in such a way that we, the audience, can actually understand what’s happening! What a novel concept! The comedy is top-notch too (i.e. the Deep’s botched attempt to rescue a dolphin from an aquarium), while also running considerably dark –as with Homelander (Anthony Starr) and Queen Mauve’s (Dominique McElligott) wildly incompetent handling of an airline hijacking.

But the key is the cast. Getting the Boys together is fun and all, as they each get most of an episode to show off their particular skill set, but their are some surprisingly touching moments throughout the series. Erin Moriarty, right off the bat, is stealing the show. While Annie is naive, has faith (as in religion), and seems innocent in comparison to her fellow superheroes, she’s never once shown as stupid, gullible, or anything less than strong. Whereas the comics showed her develop in a similar fashion where she grows into her own agency and self-confidence, there were often times where she sometimes veered into being a caricature. Here, that’s totally avoided, and it’s a testament to Moriarty’s skill.

While Jack Quaid is no Simon Pegg (on whom the original Hughie is based…and who gets to play Hughie’s dad here), he still manages to get across the “what-the-fuck-am-I-doing?” doubt and inexperience that initially drives the character. Seeing the two of them play off each other is great, as their chemistry is genuine. Urban plays Butcher about as much as I was expecting: a charming bloke with danger in his smile, and a swagger to his step, who will never have to worry about anyone messing with him.

The show works to soften some of the harshness of the comic, which makes these moments work so much better. The supes aren’t as cartoonishly vile as in the comic, which adds some much-needed depth to them (i.e. Haley Joel Osmont‘s washed up mind-reader Mesmer, helping out the Boys just for the chance of supervised visitation with his daughter), and makes their explosions of violence hit that much harder. The utilization of social media, and how superheroes would navigate that world, likewise play interesting roles, as does the near-fetishistic oversaturation of superheroes in nearly every facet of daily life.

Amazon Prime’s already promised a second season, and I for one can’t wait. As huge a fan of the comic as I am, I am just as big a fan of the show (as is my fiance, who had heretofore known of The Boys only through and my copies laying around). Between this, and Doom Patrol, superhero streaming series have some impressive additions to what would otherwise be a crowded field. 4/5 Bibles.