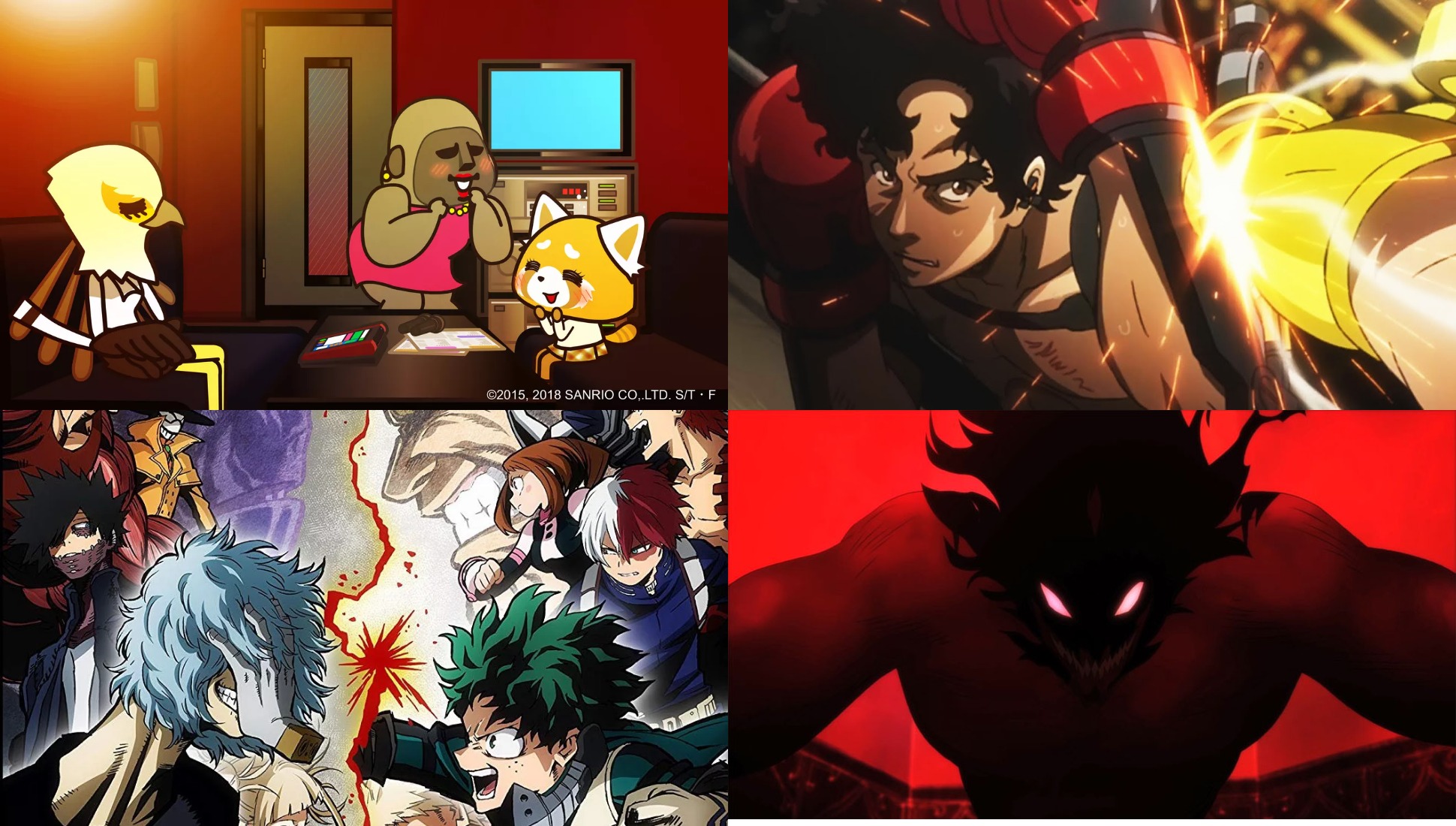 1. Aggretsuko – So. Damn. Relatable! Retsuko, a little red panda, releases her work frustrations by singing death metal karaoke. The misery of being a worker bee in the corporate world has never been more poignantly portrayed. Our heroine overcomes the challenges of capitalism, misogyny, and singlehood by screaming beautiful terrors at the top of her lungs. This Netflix Original speaks for so many of us. – 5/5

2. DEVILMAN crybaby – A reboot of the ancient classic Devilman, crybaby is a beautiful adaptation. The hero bonds with demons in order to expose and hunt demons, but somehow remains a kind and compassionate soul in between all the gruesome slaughter. There is tenderness amidst all the violence, horror, and graphic sexuality. This isn’t for kids, but adults will enjoy this dark fantasy allegory about persecution and bigotry and mature explorations of love and friendship. – 4.75/5

3. Cells at Work! – The premise is straightforward and utterly charming. Anthropomorphized cells do their daily duties, protecting and repairing and going to war against arch villain pathogens. CAW is kawaii, funny, educational, bloody, and immensely watchable. – 4.5/5

Honorable Mentions: Banana Fish, That Time I Got Reincarnated As Slime.

1. My Hero Academia (Season Three) – There has been a ton of growth and maturity for the first year students of class 1-A during the third season of My Hero Academia; Bakugo was kidnapped, All Might took down All For One and had to retire as a hero because of their battle, the majority of 1-A received their provisional licenses, Midoriya and Bakugo fought again, and the top three students of U.A. gave class 1-A a brief introduction to what awaits them during their hero work studies. Season three also sprinkled some droplets of Bakugo’s nitro glycerin sweat onto that overly frequent flashback concept and the series seems to move at a better pace because of it. – 4.5/5 Bibles

2. DEVILMAN crybaby – It’s weird to think that this, Night is Short Walk on Girl, and Lu Over the Wall (which is just shy of making the film list but totally worth your time) are all directed by Masaaki Yuasa since they’re all so different either in tone or animation styles or both. I’m partial to horror anime anyway, especially the original 1987 Devilman OVA. Crybaby delivers on the horror, the bloody, the sexual, and everything in between. Yuasa has this fluid style that moves unlike anything else you’ve ever seen. My only issue is that I wanted more seasons despite where DC leaves off. – 4.5/5

3. Castlevania (Season 2) – I never played the Castlevania video games, but I adore the animated series. You find yourself intrigued with every character despite who their loyalty lies with. The chemistry between Trevor, Alucard, and Sypha is ridiculously entertaining and Dracula is a bad ass. Throwing Peter Stormare into the supporting cast certainly didn’t hurt. – 4/5

1. Mirai – Legitimately my favorite film from last year. Mamoru Hosoda’s (The Boy and the Beast, Wolf Children) latest film is wonderful, beautiful, and told from a unique perspective that hasn’t been done before. It’s loaded with imagination and gorgeous animation and it made me cry, which is always noteworthy since I’m typically a coldhearted bastard who doesn’t feel anything. – 5/5

2. My Hero Academia: Two Heroes – Everything you love about the show packed into an hour and a half. My wife and I loved this so much and we were so glad to be able to catch it during its brief theatrical run. How All Might isn’t dead at this point is a pretty heroic endeavor in itself. – 5/5

3. The Night is Short, Walk on Girl – It is weird and bizarre with funky animation and silliness around every corner (hopefully everyone is doing their best Sophist Dance at this point), but its message is also incredibly pure even if it has trouble depicting that message at times. – 4/5

1. DEVILMAN crybaby – This newest version of Devilman was produced as an original Netflix series, helmed by avant-garde director Masaaki Yuasa (Ping Pong, The Tatami Galaxy, Kaiba). It’s an reinterpretation of the original manga with an entirely new art style as well, though there are still hints of Go Nagai’s iconic character designs. Since this anime was never intended to be shown on broadcast television, it is chock full of uncensored blood, gore, nudity and sexual acts. DEVILMAN crybaby is hardcore and not for the faint of heart, but the extreme content is not just there for shock value as it contributes to the overall narrative. This is a story about how everyone needs to work together to achieve peace (to conquer their literal demons) and that, sometimes, love and goodwill isn’t enough to save the ones you care about. – 5/5

2. Pop Team Epic – An exercise in bizarre random humor and lightening fast Japanese pop culture references. The two main characters Popuko and Pipimi come off like the Japanese version of Ren & Stimpy playing off of each other perfectly. Each episode has two parts where they will replay the same events but with different voice actors. PTE‘s insanity never lets up and it’s one of the most creative shows I have ever seen! I loved all the different animation styles they used and the OP is catchy as hell. – 5/5

3. Megalo Box – Created to commemorate the 50th anniversary of Ashita no Joe, Megalo Box is an action-packed boxing anime with style to spare. The character designs look like they would be home in any show from the ‘80s but they still have that modern polish. The fight scenes are exhilarating to watch (and pretty dang violent at times) and like any sports anime you will find yourself getting pumped up while watching every episode. Oldtakus would find a lot to love in this series. – 4/5

1. Aggretsuko – Literally the most adorably, relatable anime ever. Retsuko is a red panda with an office job that she hates. Her bosses are assholes, she’s broke and her only escape is heavy metal karaoke. It’s every millennial’s life filtered through anthromorphic animals in 15-minute bursts. – 5/5

2. My Hero Academia (Season 3) – The movie was fire, but season 3 took things to another level after a slow start. New characters were introduced and difficult choices had to be made. And if you have any doubt this show deserves to be on this list, go back and watch episode 11. – 5/5

3. That Time I Got Reincarnated as a Slime – My love for this series came out of left field! Another series about a guy trapped in a dead-end job (sensing a theme here) who gets stabbed and…well, it’s exactly what it says on the tin. It’s a fun fantasy world with an interesting protagonist that takes the time to explain how all the weird shit works. – 4.75/5

1. The Night is Short, Walk On Girl – TNISWOG is those wild night movies done right. It has everything you could want: declarations of love, hilarious misfortune and lots of drinking. Like Superbad with pretty art and catchy music. – 4.5/5

1. DEVILMAN crybaby – The Best Anime of 2018 award was wrapped up just five days into the year for all the reasons my fellow weebs mention above. Also released on Netflix exactly a year ago from today, DC continues to be the one anime that stands out both aesthetically and tonally from the rest. – 4.75/5

2. Hinamatsuri – You’ve got to hear this premise: Young Yakuza boss, Nitta Yoshifumi, stumbles upon a strange portal in his living room that pops out a pod with a psychokinetic baby named Hina. And guess who has to play “Big Daddy” to this little female Kal-El now? With his new daughter’s stubborn, socially awkard and hella spoiled persona, Nitta goes nuts… More so than its apparent man-out-of-place comedy, Hinamatsuri is jam-packed with rich supporting characters in their own fully fleshed-out stories, some of which take place in a park of homeless folk and shady underground establishment where a middle school student is hired to tend bar. The series admirably leans on its terrific script full of laughter, warmth and tears than anything super-powered, as Hina’s psychokinetic traits are more of a fun, wild afterthought. I’m not a huge “Slice of Life” fan, but it should have enough fantasy/crime elements to get shonen/sci-fi fans hooked. – 4.5/5

3. *TIE* Megalo Box / Hakata Tonkotsu Ramens – Since Michelle already spilled the jab-snapping dope on Megalo, allow me to tell you about Hakata Tonkatsu Ramens.. no, not the irresistible pork bone broth of Fukuoka, but a wacky new anime series that has a lot of jazz — both figuratively and literally — to support the anime’s fiesty crime-riddled spunk. There are enough lighter moments, many on the baseball diamond of all places, to distract you from the series’ cat-and-mouse scheme of killers hired to outst one another (a.k.a. “hitmen hitman”). There’s a ton of smart quips and surprises, scandals, mafia backstabs, swordfights, and kick-ass 70s detective soundscapes to make Ramens THE sleeper anime of 2018.- 4.25/5

Honorable Mentions: Attack on Titan (Season 3), Hi Score Girl, That Time I Got Reincarnated As A Slime, My Hero Academia (Season 3), Castlevania (Season 2), B: The Beginning, Aggretsuko, The Seven Deadly Sins: The Revival of the Commandments (Season 3), SSSS.Gridman, Goblin Slayer, BAKI.

1. Batman Ninja – While not the most perfect DC Animated flick — Tony Hale‘s terrifying vocal performance saves a Joker with a surplus of not-so-funny jokes — Batman Ninja might serve as the most interesting, especially when it comes to Lead Character Designer Takashi Okazaki‘s facial mannerisms, moving background silhouettes, and flat-out insane fight choreography. It’s Batman Shippuden, and anime fans of the DCU are in for a treat. –4.5/5

1. The Seven Deadly Sins: The Revival of the Ten Commandments (Season 3) – TSDS continues to be my favorite manga-based anime, with faithfully animated epic fight scenes, delightful humor and an amazingly intense story. The new character reveals are done perfectly and only add to the latest revelations in the heroes tale. – 5/5

2. The Disastrous Life of Saiki K (Season 2) – Saiki K‘s second season perfected the quirky comedy’s dry wit and gags. The new characters fit in perfectly with the utterly ridiculous relationships of the existing to make for tons of laughs and good times. – 4.5/5

3. Violet Evergarden – The most beautiful animation of 2018, with a story that’s equally beautiful and creative as you invest into Violet’s journey to discover her emotions outside of the horrors of war. With its simple and pure story of trying to understand a world and find the love you were denied, VE brought little action but all the feels. – 4/5

Honorable Mentions: That Time I Got Reincarnated As A Slime, Attack On Titan (Season 3), My Hero Academia (Season 3), DEVILMAN crybaby, Stein’s Gate 0, DARLING in the FRANXX, Megalo Box.

5. That Time I Got Reincarnated As A Slime

1. The Night is Short, Walk On Girl