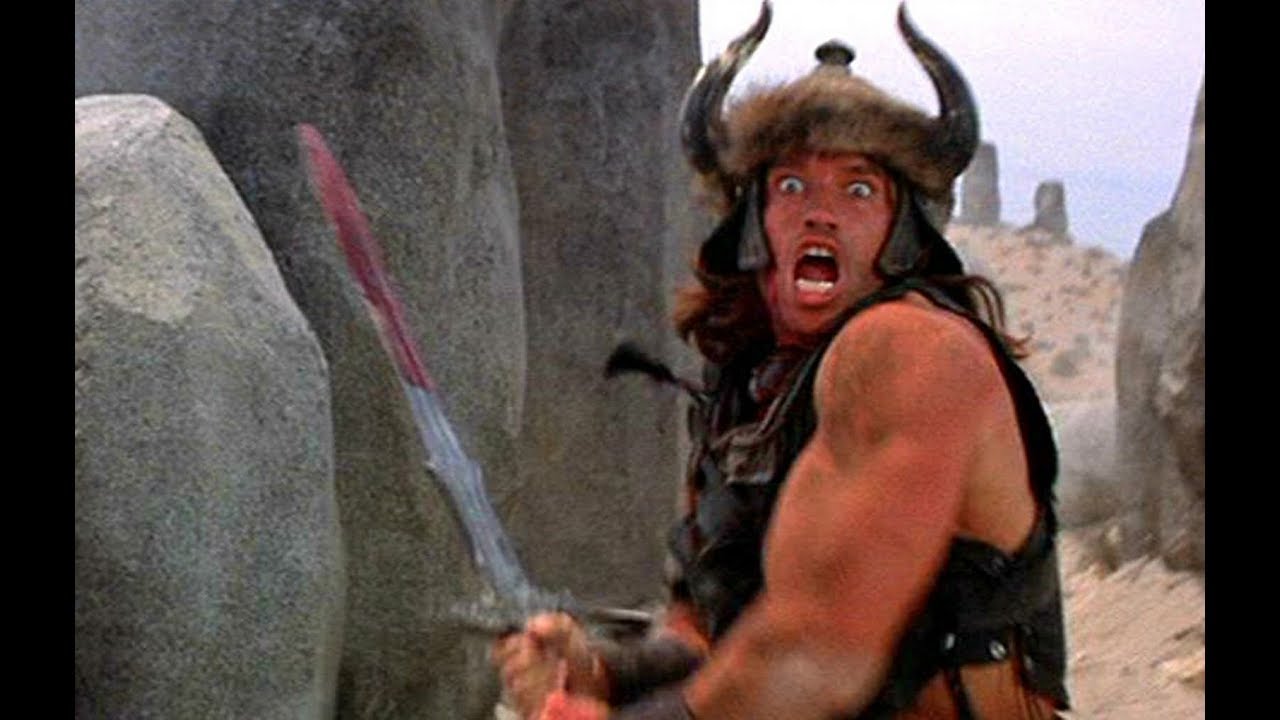 Happy Monday, geeks and geekettes! Sure, the holidays are over, and the new year is just now getting started, but that doesn’t mean we can’t still have nice things, now, does it? We’ve got some of the newest titles on which to spend that money that your great aunt Gilda mailed to you over the holidays, and you’ve got to have something to read while you’re at the gym getting started on your New Years’ Resolution! We’ve got some of the newest titles, by some of the best reviewers you can find online. So let’s take a look…

CROM! The Northern Barbarian who is destined to be King is back on his throne in the Mighty House of Marvel! First appearing for Marvel in 1970, Robert E. Howard’s creation has been a pop culture icon of paperbacks, film, comics and television ever since he first arrived in 1932. After a brief layover at Dark Horse Comics – Conan is once again home where he belongs. This time we have Jason (Thor)Aaron and Mahmud (Avengers, X-Men) Asrar bringing us this new tale of blood, sand, sex, violence, steel and magic. Jason has a long and proven track record for knowing a thing or two about handing beer drinking /hard fighting brutes on epic journeys, where Mr Asrar is no slouch himself when it comes to action and drama.

The first twelve issues also hold a new prose story by novelist John C Hocking! Words without pictures?! What a concept! Only in America! If you’re an old fan of Conan paperbacks, comics, the original films, or you’ve only seen the last film and somehow you still want to see more? This book will satisfy that craving for Crom’s devoted follower. 4/5 Bibles.

Daredevil is a fascinating character who’s defining quality is both his biggest strength and weakness– he’s a man without fear. He’s both a hero who won’t think twice to jump into any dangerous situation to save somebody and a man who recklessly jumps into dangerous situations that have negative consequences for himself and anyone around him. The Man Without Fear mini-series by Jed MacKay, Danilo S. Beyruth and Andres Mossa that will bridge the gap between the Charles Soule and Chip Zdarsky/Marco Chechetto runs seems to be exploring the dynamic between those two aspects of Matt Murdock and it does a fantastic job in this first issue. In general, I’m a huge fan of these deep explorations of characters though there are certainly exceptions. I just hope this continues along the same lines of some of the better examples (such as The Return of Bruce Wayne) and doesn’t become a huge missed opportunity (ironically enough like the last Daredevil story to attempt something like this, Daredevil: Reborn).
4/5 Devil Horns.

Writer Ed Brisson does a great job, in X-Force #1, in dealing with the immediate fallout from the Extermination event story. X-Force has reunited to hunt down the younger time-displaced Cable, who is responsible for murdering his older self. There is a strong political thriller vibe mixed into the high octane 90’s-style action, all with quick wit and dialogue that is snappy, but never becomes self indulgent. The backup story featuring Boom Boom, which runs parallel to the events of the main story, was hilarious. Brisson, and artist Juanan Ramirez, do their best to channel the flavor of Ellis/Immonen’s Nextwave. While the art here was pitch-perfect, we have to discuss the main story pencils.I am quite the Dylan Burnett fan. Reactor and Interceptor were the business. Cosmic Ghost Rider is one of my personal favorites. However, I’ve always believed that, no matter how good the artist is, if he doesn’t fit the tone of the story, it halts the book dead in its tracks. And that is exactly what happened here. Any moment where there’s a moment of grim violence, or when the story goes into “Tom Clancy” territory with the political intrigue, I was taken out of the narrative completely. 2/5 Bibles.

Wolverine: The Long Night is written by Benjamin Percy and illustrated by Marcio Takara. It starts with an interview between federal agents and the Captain of a fishing boat. The captain and his crew had checked on a second vessel adrift earlier that morning. They checked the hold, where they found mutilated bodies of the crew along with “packages” stored in there. When the agents check the boat themselves, the said packages weren’t there and were not covered in any documentation by previous investigators. The story plays out like a crime drama, coming up to an ever closer conclusion that the killer is the title character of the story. The art and color enhance the tone without making it dreary — I never took my eyes off it. I wanted to absorb the details in the recounts told by the characters as I also got invested in this small town. So now I’m left wondering, did he really do it, though? What was his motive? 3.5/5 Bibles.

These days, I’ve been keeping up on Spider-Gwen, so I’m quite aware of the Spider-Geddon, and the fight against the Inheritors, and while that crossover event plays very little in this re-introduction to Elliot Tolliver (ersatz Otto Octavius), the few references helped orient me here (this is a positive, coming from someone who otherwise hates name-dropping crossovers and events). As a quick re-introduction to the San Francisco-based superior web-slinger, though, this issue gets the job done. Writer Christos Gage does an impressive job of not only wrapping up the fallout of Spider-Geddon, but also retelling the entire origin of the Superior Spider-Man: from Doctor Octopus dying and commandeering Peter Parker’s body; his tenure of, and subsequent personal inspiration by, Spider-Man; and his prior life as Elliot Tolliver, just one of many identities he’d had stored away in case of just such an emergency.

An early appearance by Stilt-Man was a humorous inclusion, and it was interesting to see this Spidey as more “serious”, and less quippy; there’s certainly a darker edge to him, and juxtaposing that with brief history of Octavius’s personal life was also an interesting take. Being only tangentially familiar with Superior Spider-Man, it was easy to jump right in and get caught up, and the art and layouts by Mike Hawthorne was clear and expressive, if nothing too extravagant (which is not at all a problem). 3/5 Smack-dab-in-the-middle Bibles.

Firstly, I understand that this is probably required in all Marvel stories currently, but anything with a memorial to the great, late Stan Lee at the beginning is okay in my book! Regarding the story, Champions #1 was a roller-coaster of emotions, spending a majority catching everybody up to speed on what has happened. I appreciate the catch up as not everyone may be in the loop as to what has happened. Especially at the beginning where the writer, Jim Zub (Samurai Jack Comics, and Avengers), introduced everyone. A new reader may not know that Sam Alexander was Nova, or that Miles Morales is Spider-Man. A casual fan would probably be confused as to why it isn’t Peter Parker. It was a great introduction to the world of The Champions.

In terms of aesthetics, Steven Cummings did a great job on the art. My favorite part was Ms. Marvel’s transformation at the end. That was well communicated. Overall, Champions #1 is another great recommendation for anyone who wants a team-based comic like the Avengers, with lots of drama. Especially the newbies and casuals that are just getting into the world of comics. An easy in to the ever-growing, ever-expanding House of Ideas. 3/5 Strike Force Teams Agree.

The daunting task of reviewing this book left me perplexed. On the one hand, I was a huge fan of the criminally underrated Freedom Fighters arcs by Jimmy Palmiotti and Justin Gray, and felt that run couldn’t be touched. On the other hand, Robert Venditti has become a Jack-of-All-Trades writer at DC, and he was bound to turn in a good run. “Good” undersells what this team produced. We return to Earth X, where the Nazis won WWII and rule America with an iron fist. The story opens in the past, where a post-WWII Freedom Fighters are portrayed as an underground rebellion. Some fans may have found certain elements a bit hokey or jingoistic, but given the heroes and their plight, it felt apropos. What did not feel apropos was yet another massacre in a Freedom Fighters story. DC has gone to this well a bit too much over the past 12-13 years and really should have backed away from it this time. This wasn’t enough to ruin the issue, thankfully.

Venditti, and artist Eddy Barrows, have great synergy and everything from the pacing and dialogue (except for the term “Ratzi”, which was incredibly overused) felt spot on. Venditti turned down the dialogue at times and let Barrows cut loose with some well choreographed fight scenes and splash pages. I’m completely on board and can’t wait to see where the rest of this 12 issue maxi-series takes us. 4/5 Bibles.

Dark Horse’s first issue of its four issue mini series, has just been released. Written by Aleksandra Motyka, and art by Marianna Strychowska, they reintroduce us to Geralt as he enters the town Novigrad. There he takes on a contract from a friend, to identify who or what is entering his youngest daughter’s chamber at night and assess the danger they pose. The story is very simple in it’s set up and flow quickly, but as someone who isn’t familiar with The Witcher series, there is zero hand holding. One of the characters later in the issue isn’t named out loud so I’m only assuming the audience is supposed to know him, which lends a lot of expectation on the reader. If the character isn’t someone the reader should be familiar with, then for someone who plays a significant role in the events of the story, it might be important to know who he is. The assumption of familiarity might pay off for some readers, but others might be left wondering why they should care. The art has a simple animated feel when characters are at a distance and more detailed in close up. As for the tone, it kinda has the camp of a Hercules or Xena episode, so that might make or break for some readers. 2.5/5 Bibles.