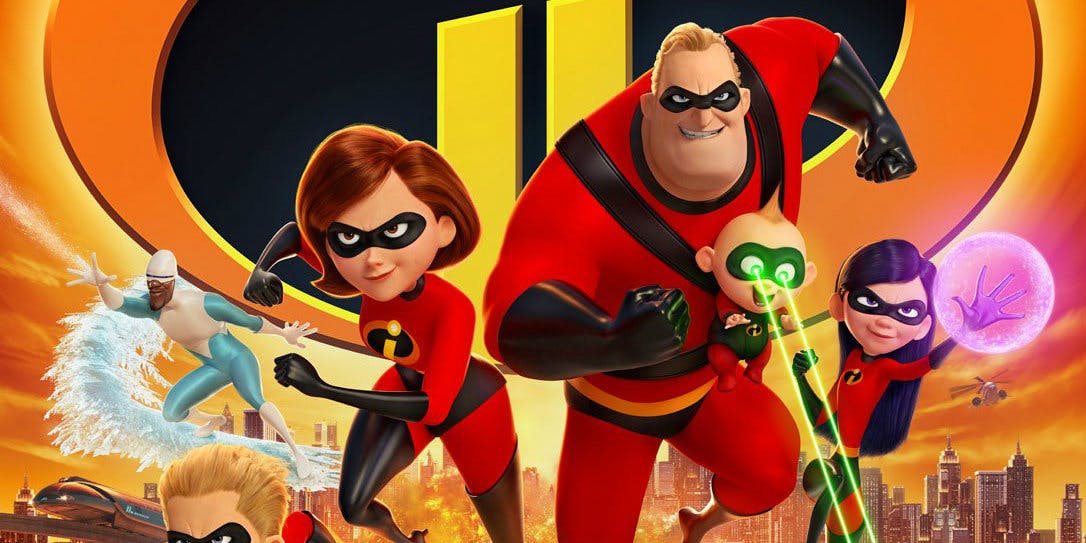 I’m sure you heard. Before this weekend I had only seen bits and pieces of Disney/Pixar Studios’ The Incredibles. Yeah, what an incredibly bad geek I am. My girlfriend felt betrayed, lives were lost, geek culture was ruined. The great news is that I halfway, somewhat, maybe, hopefully redeemed myself by taking us to see The Incredibles 2 in 4DX– a most suitable format for Brad Bird‘s brilliant element-based, non-stop action.

I never imagined a cartoon movie or any form of animation working in the 4DX format. I didn’t even know it was a thing. Silly me. Watching The Incredibles 2 in those ice-gliding seats was a thrill, and there’s no doubt that they Disnified this experience, ramping up all the usual cooling, heating, and spritzing effects to the Nth degree. It almost makes me wonder if Bird, at any point in his writing and directing the film, was consulted by executive producers that insert wonderful moments that would coincide in the 4th Dimension to the max.

While that’s doubtful, it may also be saying something in terms of 4DX’s post-production readiness; even the 3D–typically the portion of the viewing experience I care the least about–was awesome during an early fight sequence between Elastigirl and Screenslaver (haha, um, yup). The bright bulbs of the closed-in airspace and intense fight choreography had a super original contrast that just popped on the screen. My only issue with the 4Dx experience was a putrid smell that would pour out every time an explosion of some sorts popped on screen; time to potpourri that son of a gun.

14-years later, and the Parr family is still as lovably quirky as you remember. Craig T. Nelson (Bob) is just tremendous as the mostly stay-at-home-superhero-dad, while Holly Hunter (Helen) carries much of the animated film’s emotional weight in her urge to breakthrough for female supers while all the same worrying about her children, Violet (Sarah Vowell) and Dash (Huck Milner) — both older and far more testy — under the supervision of Mr. Incredible.

Oh, and Jack-Jack? This is his movie. The Parr’s baby boy (voiced by Eli Fucile) now has more powers than a Marvel Collector’s Card (in some of the film’s funniest scenes, this new discovery only makes eccentric fashionista E want to adopt!) and it’s up to Bob to deduce a way to save both his household and his pride. Good luck keeping this all in a crib, we say!

As far as new voices, Better Call Saul‘s Bob Odenkirk breaks out as Winston Deavor, who, while not all too unlike his megalomaniacal lawyer from Breaking Bad, is a great character you might be iffy about from the get, as a CEO mogul trying to get into the “superhero business” and saying any further enters spoiler territory. Catherine Keener is also a treat as Winston’s “Shuri”, Evelyn — the more tech-savvy sis you’ve also got to keep an eye on. Frozone (Samual L. Jackson) returns and rounds out the robustly talented group. He comes up big just when the Parrs need him.

The film is quite frantic (loads more action than the first, which leads to more mobile chairs than most 4DX films), packs plenty of heart (seeing Bob figure out Dash’s “New Math” is a blast), and has–for lack of a better term–incredible animation and signature direction. Incredibles 2 is no ordinary “cartoon”, and is a delightful Disneyride-like experience in 4DX–well worth the 14-years to create, or, for worse, a franchise a very small, albeit embarrasing number of geeks pathetically waited this long to see.