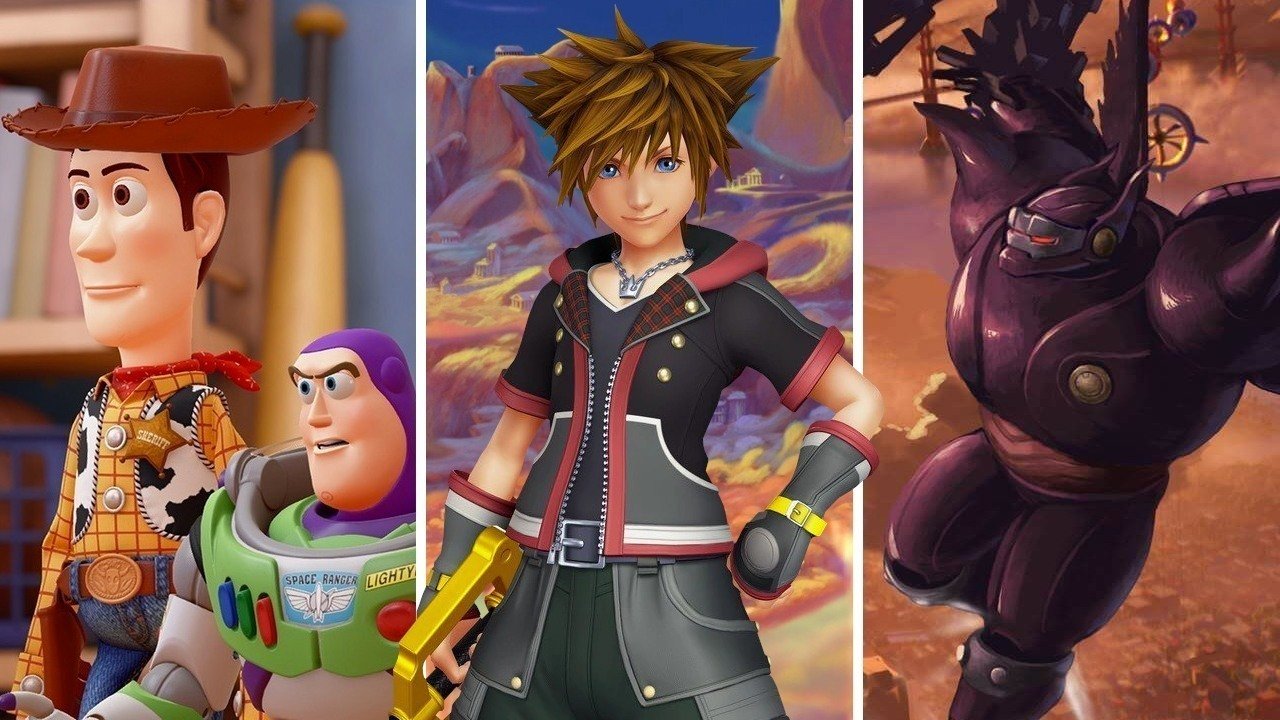 After finally getting some hands-on time with Kingdom Hearts 3, I’m even more excited to own the long-awaited sequel than I’ve ever been! The hype is real, y’all. Even after demoing two far different missions (Hercules and Toy Story) and catching the last full trailer at the Sony press conference, there are still so many questions left unanswered. Everyone just has to be curious as to what exactly was left on the letter that Mickey sent to Sora and his friends at the end of KH2. How is the Organization still alive after be killed in KH Re: Chain of Memories and KH2?

For now, my favorite part of KH3 was playing inside of Toy Story World, where you meet Woody and Buzz LightYear. You start off fighting the Heartless in Andy’s room, then hop through a window ledge– taking the fight to the streets (OK, so a driveway), and ultimately wind up in the Toy store; a copy of Xehanort from the Organization tells Sora he has something he needs do, summons a few Heartless and then disappears. You get attacked by toy robot mechs, but thankfully are able to board your own (which is very simple to utilize and control) and destroy the Heartless to demo’s end.

While Olympus‘ boss battle had a swifter, maybe more enjoyable pace — and had a wonderfully lit-up Big Mountain Railroad train attack, the visuals of the Toy Story levels blew me away. Unless you’re looking for Sora, with so much great detail players will be hard-pressed to tell the difference between the game and the movies. There are many questions and speculations on what happens next, and for those of you that have never played the series, you still have time before KH3’s release on January 29th: there is an “All on in One” Kingdom Hearts bundle for purchase where you get KH 1.5-KH 2.8 prologue on PS4. 4.75/5 Walt Disney Bibles.

It was 8-years ago when we last saw a Fist of the North Star game, one developed by Tecmo Koei (Dynasty Warriors) entitled FNS: Ken’s Revenge. It wasn’t a bad game, but had mixed reviews and was repetitive. But now, the famous manga and anime movie is getting a chance at a new game, FNS: Lost Paradise, this time by the developers at Sega behind the Yakuza series.

In the E3 demo I played, your hero, Kenshiro, starts off in a post-apocalyptic city attacked my multiple enemies where be counters with martial arts techniques that make enemies heads explode! Kenshiro, later, gathers parts to fix a car that allows you to explore an open world that wasn’t in the previous version. There’s even a fun side mission where you play baseball with a metal 4×4 where you belt enemies into the air. Other fun side stuff includes bug-car racing, tending bar, and arcade gaming. Your more deadly techniques — extra carnage! — also come from a leveling system named Hokuto Shinken, all ready to be explored in gorgeous HD on October 2nd, 2018. 4/5 Bibles.