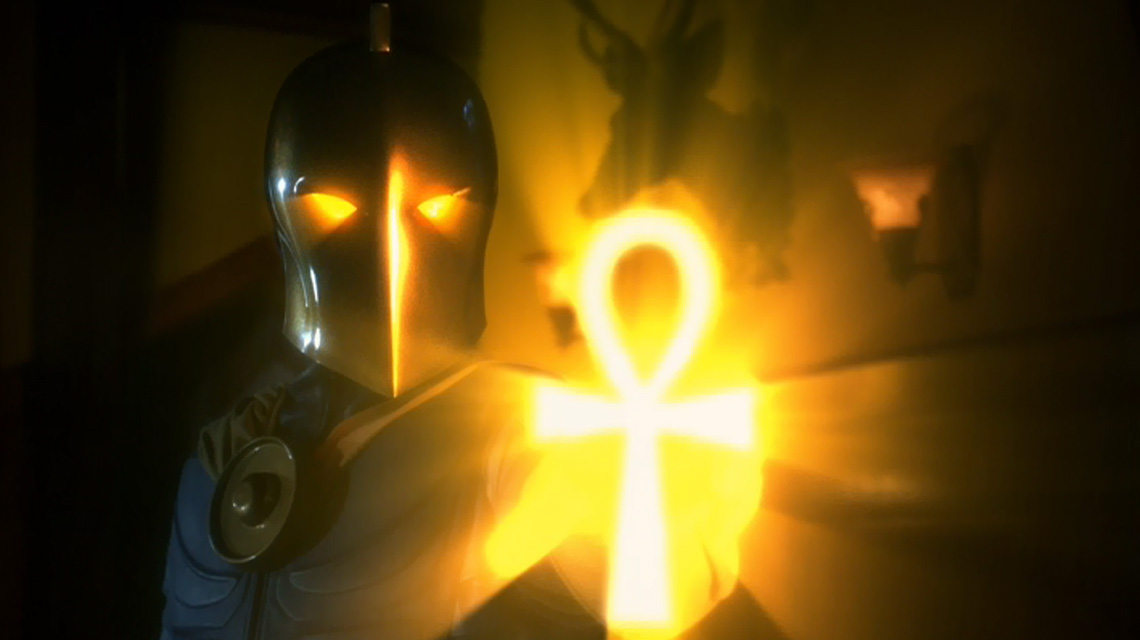 “It’s been a long time, we shouldn’t have left you.” – Rakim

Yes, it’s been 9 — NINE long days since we’ve last hit you off with an update (until we were blessed with the Divine One’s excellent take on the new season of SOA), so we have a barrel of epic articles this week for ya. In addition to our long-awaited take on Destiny, we have a full preview of the WWE PPV this Sunday, Night of Champions; our ever-controversial take on NHL 15; and a Fistful of Comics and Futures End Sunday Stash: The Versus Edition that will prove better than ever.

Hey, no better time to launch our fantastic funnypages than now.

A whole new world opens up in Jonathan Hickman (Fantastic Four), “In 8 Months…Time Runs Out!”, and it’s worth every second. Your favorite Traveling Nerd greatly enjoyed this new jumpstart to the lagging storyline that we’ve been hampered with in recent months. Jumping ahead allows us to see a glimpse of the future of characters that had grown stagnant in their current stories. Depending if this will stick or stay as cannon is another story, though this isn’t our first Marvel rodeo with fast forward story lines that never come to fruition.

With a stunning cover that’s been glimpsed since before SDCC, one would expect to see more action out of the original Avengers. Sadly, the 30-pages only bears fruition of Thor, minus an arm and wielding Jarnbjorn — not Mjolnir. Though the story may lack a darker Captain America and a whiter Iron-Man, it does make up with filling us in on the future of newer Hickman characters and a few beloved New Mutant heroes.

Fresh off his stint with Wolverine and the X-Men, Nick Bradshaw (Army of Darkness) does excellent work, especially when drawing the human Cannonball, Sam Guthrie. Picking up the middle of the issue is returning champ Dustin Weaver (S.H.I.E.L.D.), who has perfected Ex Nihilo and Ex Nihili. Rounding out the issue when the action really starts going is Jim Cheung (Scion), whose pencil work on the final confrontation adds to the Illuminati expose. Having this trio truly adds to this issue by bringing you to the depth horrors awaiting our future heroes, but also allows us to enjoy the lighter moments, such as Sam and Sunspot’s reunion. 4.25/5 Prunes swallowing Old Steve Rogers agree.

Continuing this week and last is the initial ramp up to Dan Slott’s Spider-verse, with Edge of Spider-Verse #1 & #2. Both issues and the following two coming each week this month will tell the story of a popular Spider character from the new Spider event. Issue one covered one of my personal favorites, with Spider-Man Noir and issue two brings us back to the fairer Spider with Gwen Stacy’s Spidey. Both issues are enjoyable, and both brings something new to the continued stories and art that matches the look of the characters. Robbi (F.B.P.) Rodriguez‘s stretchy stylings absolute knock ish #2 out of the park. It’s akin to viewing a spiral of Andy Warhol paintings on LSD. (Trust me, man; I know!). Whether each book’s vibe is for you or not, you’ve got to give kudos for an event that takes many risks and surpasses them. EOS #1 – 4/5 Spider Flappers; EOS #2 – 3.75/5 Spider Lipsticks.

To receive one Grant Morrison (Final Crisis) book is a treat. To receive another, is bloody fucking Christmas.

The last two week’s have been great to us Morrisonites, so much so that my hands were falling apart on my airplane back from Boston just from holding the hotness that is A Morrison Comic.

There’s always a lot going on between the Big 2, especially now with AXIS, Time Running Out, the Futures End, and Marvel’s webslinging answer to Grant Morrison in Spider-Verse have all pitched a presence. Still, it’s hard to get excited about any particular “event” more than The Multiversity. While it’s quite possible that none of this “I’m going to create a bunch of comic caricatures just to piss some of you people off” will eventually make sense, I’m willing to bet The Multiversity will have a larger impact on the foundation of the Big 2 Universes than any AAA-comic out there. Or, at least more surprisingly. Or, at least with the most fun.

This particular S.O.S. comic scales back all the madness that is Multiple Earths, using only Earth-20 and Earth-40 as its mere staples. And that’s what makes it all the more fun. Rather than show glimpses of characters — or caricatures a.k.a. Morrison’s own variations of iconic pulp superheroes (or presidents) — this more throwback/pulpish noir spends more panels with our “Conquerors of the Counter-World”, allowing our writer to exercise his pithy humor, sweet narration, and propensity for high concept. With hints of the previous one-shot’s exposition, that may or may not be necessary, he’s literally taking the Golden Age and….actually making it enjoyable. Or maybe he’s just doing his best Jeff Parker impression. With Chris Sprouse (Batman: The Return of Bruce Wayne) and Dave (American Vampire) McCaig‘s clean but fully retro panels, this one-shot is the King’s Watch on LSD. 4.5/5 What’s Up Doc’s.

But as important as Sprouse’s entirely digestible, thankfully accessible art is to TMTSOSHCOTCW, Frazier (Batman Incorporated) Irving‘s impact on Annihilator #1 is that much more. Not to be confused with Marvel’s space odyssey that was AnnihilatorS, Morrison once again gives us a “comic within the comic” that even the most successful of Hollywood screenwrights would be jealous of. Sure, we’ve read stories of writers meeting their own characters before, but it’s the SPACE! (said in full-on Chuck D baritone) of Irving that makes this Legendary Entertainment comic something special. I’m sure the story will play out much further than this even sleezier Californication-meets-Evil-ET, but with an abundant of gorgeous positive/negative and lighting/shading contrasting images from Irving, this is a comic you should be reading anyway. 3.75/5 Halfhawks.

If God already hates geeks, He shouldn’t be surprised if we relish in the devilish delights that is the new Purgatori series from Dynamite. The first book, written by Aaron Gillespie (author of Bionic Man, not the metalcore drummer/frontman) with art by Javier Garcia Miranda (The Thunder Fellowship), introduces us to the titular Vampire Goddess as she’s exiled back to Earth by Lucifer Morningstar – the devil himself. In just one issue, Purgatori is set up in the most badass way possible and then brought down to a relatable level. The art and story come together in a beautifully brutal way, with well-rendered grotesque images depicting her torture in hell (which she endures with a smile) as well as the bloody chaos she causes on Earth towards the end of the issue. This is a good read for high-fantasy comic fans that are looking for a mature title – emphasis on the mature. 4.25/5 Demon Babes.

There is general intrigue about the Alien universe and interesting biological changes from the film’s desolate and barren planet. However, the scientists still talk like spacemarines with all of that cringe-tastic dialogue, there are plot holes aplenty and there is a cliffhanger ending – that is meant to entice the reader to the next issue – but instead feels cliché and cheap.

If you enjoyed Prometheus (2012) and are craving more information until Prometheus 2’s inevitable release, then you might be able to extract some black goo from this. 2/5 Straight-to-DVDs.

Copperhead #1 is a Western set in space.  I know what you’re thinking: “Wait, you mean it sounds like FIREFLY? So if I loved Nathan Fillion’s.. I’ll love Copperhead?” Yeah, basically. TV writer (Ringer, StarCrossed) Jay Faerber‘s comic takes place after a war where a female sheriff looking “to make a fresh start” heads to a distant planet to bring law and order. The first issue sets up a lot of questions that will make me continue to read the book to see what the answers are, and with Dracular: The Company of Monsters penciler Scott Godlewski‘s clean linework resembling the goods of triumphant comics such as Invincible — all with a more Western flair — so should you. 4.5/5 Copper Tone Bibles.

And then there’s The Bionic Woman: Season Four. This Cardinal — with kudos to our other Card, Mr. Brooks — always likes to say something positive about everything I review so, here it goes: Um, it had some intriguing plot lines? In general, the book was kind of slow and didn’t really get exciting except for 2-3 pages. Maybe this will work better in graphic novel form. Maybe. 2/5 Bionic Elbows.

Image is really all over the map these days, and Oddly Normal is a prime example of them adding something fresh to their super strong lineup. Otis (ABCDEFGeek) Frampton‘s story revolves around an 11-year old half-witch named Oddly (see what they did there?). The issue sails bye and though it suffers from first issue-itus a bit, it’s got a lot of charm. It does a stellar job of maintaining a tone that works for adults as well as younger comic seekers. It borrows more from cartoons like Fairly Oddparents than it does any other comic on the shelves right now, and that’s a good thing. 3.75/5 Bibles. Remember those?