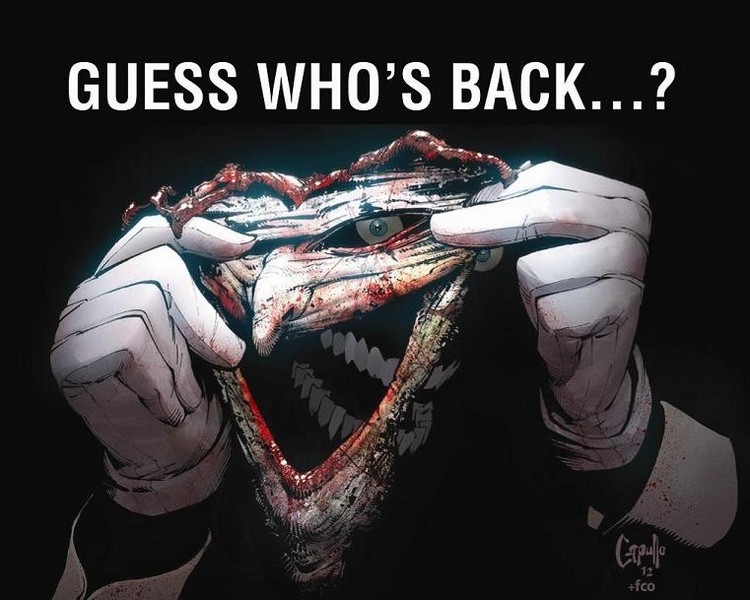 Now this is getting really sickening, Scott. Every month you’ve got me telling people that I’ve just read the best issue of Batman in years. Why can’t you just stop?

‘Cause the Double-S can’t stop. And he won’t stop.

“Death in the Family” is Batman’s latest crossover, and you notice how no one complains whenever there is a crossover spotlighting Batman? But, geesh. Think to get anyone else involved in the mix and the detractors are sure to come a ringin’. That’s because Scott Snyder knows what he’s doing. At least we hope he does; though, a paranormal experience may explain why his comics — including Swamp Thing, himself involved in another comic crossover — are so damn horrifying. Thus, if Snyder’s Detective Comics‘ “The Skeleton Key” was the scariest Bat-arc in years, then, well, the joke’s on you.

Elements from nearly every important tale involving Joker are witnessed here, from the beloved cartoons, classic Batman comics, to even the twisted realm of Tim Burton, but this reviewer wouldn’t want to spill out any of Batman #13‘s juicy chemicals. It’s amazing how many new layers the creators add to the classic tropes of Gotham most know and love.

Perhaps what separates this Joker from all the others is Snyder’s new distinction. It’s as if the dialogue was compiled from a greatest hits package and then perfected. In the past we’ve had the overly joyous TV Joker in Cesar Romero; the Animated Joker who uses playful pleasure for business in Mark Hamill; the apologetically sarcastic Fairy Tale Joker in Jack Nicholson; and, my own personal favorite, the demonically twisted Blockbuster Film Joker from the late great Heath Ledger. Hey, whatever your favorite distinction of Mr. J may be, Snyder’s got it all covered with his own horrific version. That’s a promise.

Just know that nearly every page, panel, joke and tease involves a significant tear into what has thus been built upon in Batman in the past year, and that the good majority of other Bat-titles will now be dealing with the Clown Prince of Crime, too. This new scheme, tailing off a rather bizarre yearlong hiatus (thanks to new flash-in-the-pan villain Dollmaker in early issues of the New 52 Detective), throws J at the numerous heroes added to the Wayne family in the past year.

Oh, and revenge for this newfound “faceless” nature.

Though Batman tries wholeheartedly himself to keep things cool, Snyder and artist Greg Capullo don’t slip on making this comic as venturesomely sadistic and suspenseful as one would expect. There’s enough twists and turns to take up a whole graphic novel, without a moment ever happening for merely shits and giggles. Well, maybe giggles — if ever-lasting pain and misery are your type of thing. Capullo is once again fantastic, melting the G.C.P.D. with shadowy panel — and Joker — placement, throwing death all over the face of one Jim Gordon, to spooking a local TV audience with a “kids game” that’ll have viewers up in stitches.

Throughout Batman’s lucky #13, you can’t help but feel smothered by the Joker’s eerie presence. And, unfortunately, that’s how a night with Mistah J should be.

2 Replies to “The Weekly Worship: Mistah J’s back, back again.. (tell a friend).”