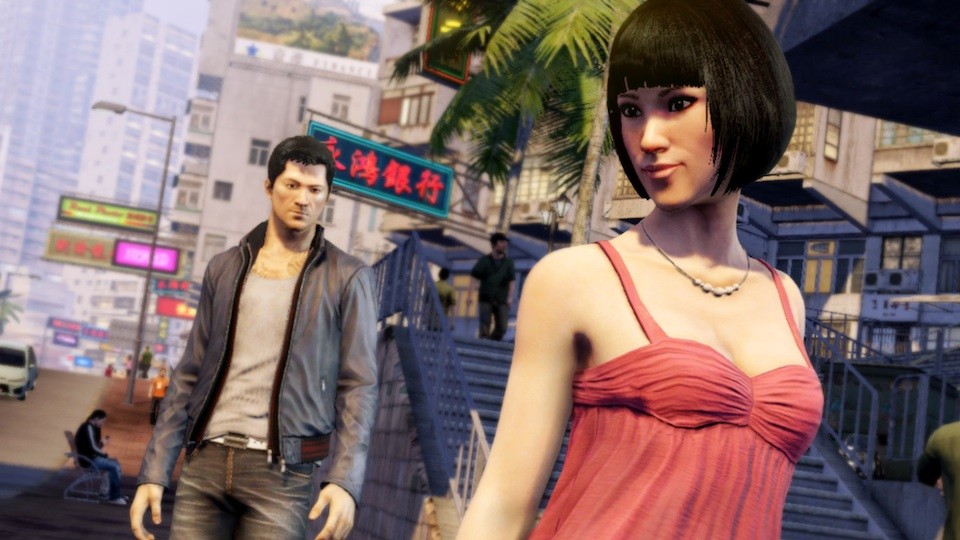 If you miss playing Grand Theft Auto IV and simply can’t wait for the Los Angeles-based GTA V, do yourself a favor and cop you some Sleeping Dogs.

I’d go so far as to argue that this open-world, Hong Kong undercover-thriller offers more excitement than any past GTA, and if you don’t believe me, just take a moment to check out this list: “I Fought the Law,” “I Ran (So Far Away),” “Hit Me With Your Best Shot,” “All Out of Love,” “Bad Case of Loving You,” “Girls Just Wanna Have Fun,” “Reelin’ in the Years,” and, not forgetting the Corky Romano favorite, “Take On Me.”

Yes, Dogs is indeed a bloody, violent and disturbing game.

And witnessing our Wein Shen rock out to eighties New Wave.. is sort of terrifying in itself.

In addition to our Lost in Translation moments of song, Sleeping Dogs packs a plethora of mini-games, including an overcrowded “fight club” (frustrating) and some intense drag-strip racing and Duchati-wielding reminiscent of Fast & The Furious: Tokyo Drift (exciting but thereafter redundant). But, hey, at least this breaks up all the excellent blood-soaked shootouts and GSP-inspired street fighting (yes, the UFC champ really helped with most of the kicks and the chops). It’s almost as if the developers at Unites Front Games took all their favorites —Midnight Club, Max Payne, GTA — and rolled them into one.

But there’s more to this dog than just that.

Sleeping Dogs packs almost too many distractions, from the constant GQing it up in one of your many uptown lofts to performing humorous (and apparently meaningless) tasks for the local townsfolk (dumping an auto into the drink as an insurance scam of sorts, among one of my favs). After a while you will probably just ditch all the tiresome errands and racing stuff for the prime story itself, which really ain’t bad.

In fact the game features a prime number of voice actors — Emma Stone (uh yeah, far before that whole Spider-Man bit I am sure), Tom Wilkinson, Lucy Liu — although I’d sum up the majority of the script’s quality as to laughable at best. Then again, isn’t that how the majority of Kung-Fu cop dramas go?

Dogs has come a long way from the game that was “surprisingly a lot of fun” at E3 and the game I mocked at SDCC about being an advocate to slap women around (it only really happens if you go out of your way to do so, so “whathadhappehwuhhh..” this one particularly annoying massage therapist… ahh.. sorry). The one element of S.D. that got me hooked at E3 was the use of environments during street scraps. Use your imagination, and you can probably use anything your sick little mind can think of towards your advantage — including killing dudes with the snout of some very sharp fish.

Maybe too many people this past June were worried about the other dogs, Watch Dogs, and lost site of how freaking cool Sleeping is.

But, if you’re really wondering why this review took nearly 2 months to come out, let’s just say sleep came into play just like it has had with many others. With Darksiders and Madden taking over my August and the likes of Borderlands 2 and NBA 2K13 receiving their deserving share of the palm sweat, as well, it makes it all the more cooler that this Cantonese-speaking-and-subtitled underdog had been stealing my time. Not to mention, Dogs takes roughly 25-hours or so to beat if you mess around with many of the detective/errand/race missions to boot. Long game.

Ironically, the Rev crashed out last night in his hotel room after several fine hours of playing this game, only to wake up and discover that most of the save data from the past week or so had been deleted.

The Sleeping Dogs “Racer Pack” DLC to be released next week, October 16.