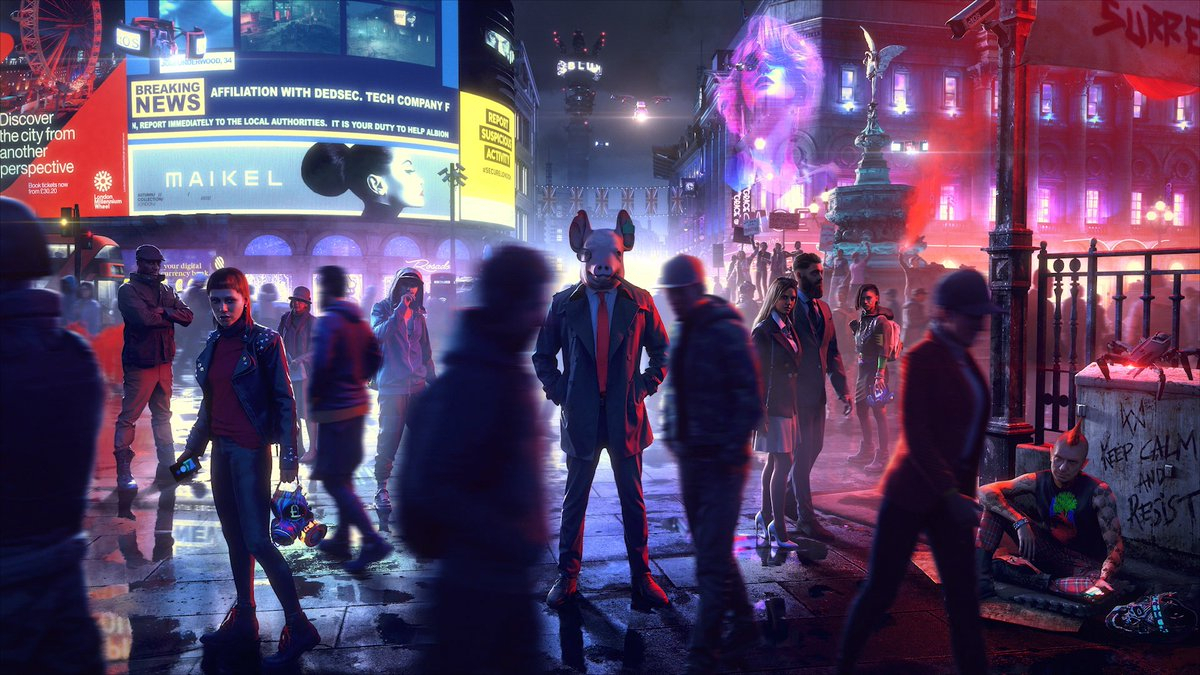 WATCH DOGS LEGION (Ubisoft – X1/PS4/PC – March 6th, 2020) – At E3, I got a chance to play Watch Dogs Legion for about 20 minutes. With the third game in the series now set in London, players are able to control and recruit multiple NPC’s instead of one protagonist. Wilder, each character you come across and profile has their own background, special set of skills, and daily habits; after you recruit a character (to DedSec of course) they are signed to three classes, combat, stealth or hacking.

The combat class, Enforcer, is exactly what it sounds like– guns, guns and guns. Players can dodge and avoid incoming gunfire with more ease, use sticky mines and pack more powerful ammo. The stealth Infiltrator is the class I used in my play session, naturally. My character had the ability to make herself invisible (via augmented reality cloaking) and she used non-lethal force to take out her enemies. Shocking and hiding fallen foes was fun. The final class should be obvious: Hacker. Moody will talk more about that one in a minute.

Having the ability to control multiple characters definitely keeps the pace of game interesting, and keeping all of their egos in check to make a squad should be a great challenge. That said, Legion didn’t completely grab me. With the game not out until March, I’m still deeply interested in seeng and hearing more about details and story. 3/5 Bibles.

Much like Keanu when he stole the show with Cyberpunk 2077 at E3 2019, Granny steals my hacktivist heart here with Watch Dogs Legion. She was easily the best part of my demo (Artez and I split our 45-minute hands-on time at the meeting), hobbling around, bitterly commenting on her uber tech/drone swarming surroundings; yet, she still had the willpower of intel and years of assassin training to be the Most Dangerous Woman on the Planet. Imagine if the main protagonist in Mr. Robot was played by Betty White instead of Rami Malek. Yea-huh…

My Granny hacker owned, with callbacks to PS4 Spider-Man in her use of spider-turrets and robots during enemy infiltration. But Granny may have “owned” a little too much. Legion got real spoofy once my senior ciritzen hacker alerted security, taking multiple gunshots with little problem clearing the area; though I’ll admit it was a hoot watching spider-bots pull an “Alien” and destroy the faces of many.

My hope is that settings were on “Beginner” to ease first-time players into the controls, or, at worst, that AI is still a work in progress and, in the retail version, players won’t simply be able to gimp around and clean everyone’s clock with Ms. Joanne Wick. We’ll see. Thankfully Watch Dogs Legion is largely a team effort. Players are required to assemble their own “fSociety” squad of hackers to battle the privately-owned security corp, Albion.

But don’t get too attached to Granny or anyone else. Permadeath is reality. When a part of your team goes, they go. There’s no coming back. Before you can think about the endgame for any in your team of hackers, you must first convince them to join DeadSec, even if they have strong feelings of hate towards the group. This goal can be accomplished by running a series of side missions to convince recruits that joining is the right thing to do.

Our demo host skipped all the small play in favor of the main mission at hand, but there’s no doubt that Watch Dogs Legion has an awful lot of depth to it. While overall density may have prevented Legion from being one of the better demos at E3 this year, that notion certainly didn’t keep it from being one of the most interesting. 3.5/5 Bibles.