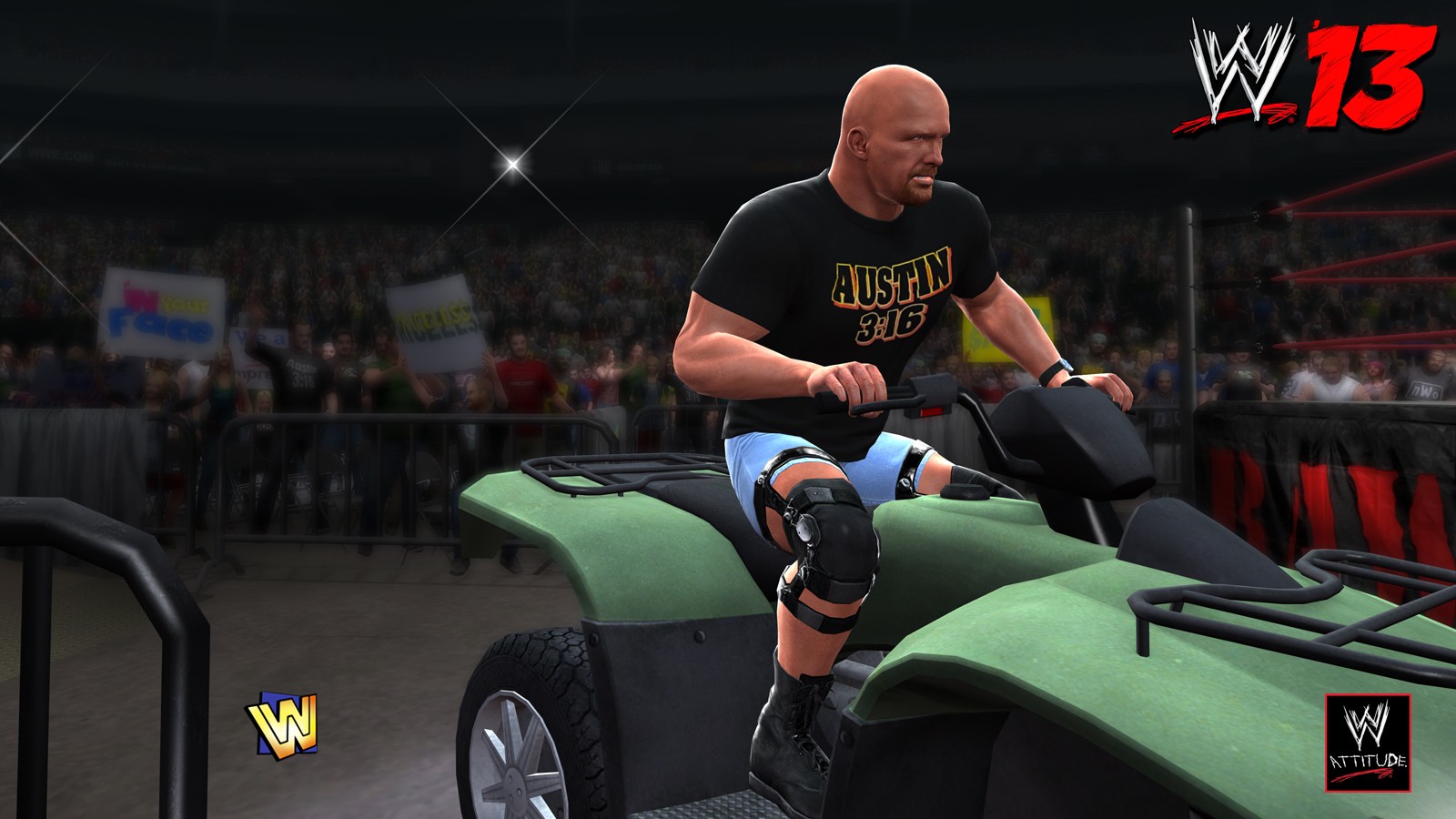 However the game isn’t without it’s scoop of flaws.

You see, WWE ’12 is essentially what got the good ol’ Reverend back to wrestling, all in a generation where being over 30 and still watching brutes in tights sing to each other is oft considered a Wal*Mart special. Or a death to dating. Or downright immature. But, hell, the thrust of the new controls, new animations, and new “season” mode is what ultimately led me to my biggest vice of last winter…

Didn’t like the fact there were only 50 Create-A-Wrestler slots last year because you had to decide between the Sandman and, uh, Batman? Well, although ’13 sports the same amount of CAW slots, with the now overabundance of classic stars like the New Age Outlaws’ “Bad Ass” Billy Gunn and “Road Dawg” Jesse James already included (if you unlock them, of course), there’s less reason to worry about having the room to imagine up any sort of superhero, TNA, or presidential candidates this holiday season.

Does this reviewer still want 100 slots? Of course he damn does.

Moving on to the big kahuna this year is the new and insurmountably improved “Road to Wrestlemania” mode, Attitude Era. There’s 6 different paths (and an off-script path, included guys like The Godfather — I know, imagine him in a team with Brodus), which all brilliantly blend in sequence with impressive promo packaging, that allows you to see just how the WW-bleep took over WCW and eventually became World Wrestling Entertainment. After witnessing so many charts, mentions, and references to the former Doubleya-See-Doubleya, it makes ya feel like playing a little nWo, as well.

Also, a lot of other wrestlers pivotal to the Attitude Era such as Ric Flair, the Hardy Boys, and ECW were not mentioned due to the majority of those guys currently playing in Jeff Jarrett’s organization down in Orlando.

Thankfully, the Attitude Era itself is enough of a blitz this season to avoid utter disappointment despite the fact both WWE ’12 and WWE ’13 are the same game. Last year, THQ electrified wrestling video game audiences across the land and — yet — there were still several months of complaints: server issues, bugs/glitches, The Rock stuck a pre-order character, terrible commentary.

Even with good ol’ JR Jim Ross manning the mic for the lengthy Attitude Era mode, commentary becomes too sparse and horrifyingly loud/over-trembling after many matches. It’s as if the folks at THQ shuttered in past, classic commentary without gauging the audio frequency.

You guys do realize you’re charging these kids $60 a game, right?

Also, the commentary can be either as electrifying as the guests — The Rock, Stone Cold, Triple H — appear, or as bad as the chemistry Michael Cole and Jerry “The King” Lawler have had most weeks on RAW. Adding JBL and/or Paul Heyman to the THQ roster would be as good of idea has it’s been in the “real life” alternative, and emulating the seamless conversational value of an NBA 2K13 3-man booth would be most ideal. Let’s face it: watching wrestling on TV is nowhere near as fun without listening to all the usual cliches and sadistic metaphors we’ve all known to grow and love.

Let’s talk environments. Now, with WWE ’13 aiming to match the shock moments of the past — Mankind getting chokeslammed through the Hell in the Cell, Mankind getting Rock Bottomed on the announce table, Mankind…you get the idea — players can now steamroll opponents through the barricade, finally do as they please on JR & the King’s wooden mantle, and enjoy a larger array of places (i.e. cage doors) to bust their opponent up. It’s not quite up to the level of Extreme Championship Wrestling, but it’ll do for now.

Now, most of my time playing WWE ’13 was spent with the single player Attitude Era, primarily because this mode remains the biggest reason to buy the game, and, sure, unlocking all of the other wrestlers/belts/attires and what have you out of the way appears surely the way to go.

And since today essentially marks the first time players will be able to download CAWS, rings, logos, etc., it’s still too early to judge how all of that will turn out. Likewise, with an abundant number of DLC characters such as the Attitude Era’s Goldust, Rikishi, and my own personal favorite Brian “Loose Cannon” Pillman in addition to current stars Ryback, Damien Sandow, and Antonio Cesaro still yet to hit the game.

Since Attitude Era’s sure to take up a bulk of your time — often for it’s annoyance, as well, like trying to prevent Animal from tagging in Hawk, or the harsh goal of trying to both Lion Tame and powerbomb Road Dawg’s redneck ass through a table in less than 4-minutes to earn the DQ  — it’s still good to know there’s a near limitless run of scenarios in Universe Mode (there’s said to be 200 new cutscenes this year…hmm..) that is sure to  deliver some heavy replay. That — and THQ thankfully eliminated a few headaches with the new ability to vacate every title and edit title rankings yourself.

It’ll be a lot easier to have a more accurate “season” to your liking in WWE ’13.

Another good one? It’s much easier to break out of pins this year, which was perhaps my main concern going in. The pin meter is still there, and still requires some skill, but it’s not so lightning quick you’ll lose to a simple chop in the first 40 seconds. And if you want to head to the match locked in with 8 tombstones, you can now edit that at your disposal.

Graphics are slightly enhanced from last year as well, with some entrances like that of Kane’s looking particularly bad ass. I just don’t get why Bret Hart looks like a mix between Richard Grieco and Howard Stern, or why the 97-98 Undertaker has music I’ve never heard before. But, hell, maybe that’s just me. The ring lighting in the game also resembles a glowing white paint dye rather than mere reflected sweat. And, why are the commentators never sitting down?

In addition to the same dysfunctional  often buggy A.I. opponents that will just freak the shit out of us (Stone Cold! Stone Cold! Stone Cold! He’s running…. running! Running! Around the ring! Away from an opponent is obviously hurt! Away from someone ready for a stunner! A stunner!), there’s going to be some speculation from players as to why THQ didn’t give it another month.

Don’t be surprised if the word “patch” is the one you see the most on the forums.

With all that said, the game is still a whole hell of a lot of fun. The Attitude Era should bring tears of joy to many longtime fans, as the mode is also surprisingly a solid educational tool in itself. Little did I know exactly what type of impact Dude Friggin’ Love had on the War Zone (his matches with Rocky were nutty) or how successful post and pre-UFC Ken Shamrock was (Intercontinental Champion and King of the Ring). Also, was I the only one who remembered Boss Man at this stage as the mere nWo henchman, Big Bubba? ‘Spose he did pretty decent for himself in McMahon’s corporation.

Look, if you skipped out on WWE ’12, the chance to relive many of the biggest moments in wrestling history (i.e. formation of D-X, Montreal screwjob, Y2J’s debut on Smackdown) just may be too hard to pass up.

And… you had it last year and liked it, the Attitude Era just may not be enough.