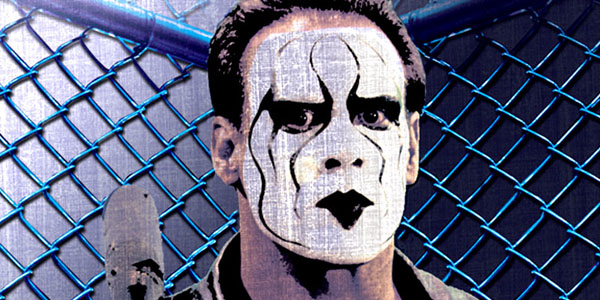 Oh, what a night! If you consider yourself a wrestling fan, then it’s quite obvious what everyone is rantin’ and ravin’ about around the water cooler this morning: The Legendary Stinger is HERE!

Yes, Sting — after 30+ years in the business — has finaly made his WWE debut. And it couldn’t have come at a better time. Team Cena was dismayed, thanks to a turncoat, and only one man stayed alive. We’ll let you discover just who in the following WWE 2K15/Survivor Series 2014 edition of our famed Ringside Apostles Podcast, headed by co-hosts “Monsignor” Travis Moody & “Bishop” Richard Zom, featuring a special guest star you DON’T want to miss!

And, when you’re done listening to that (mediafire download link here!)– we’ve got another almighty Geek vs. Nerd Video Game Face-Off, this time for our much-hyped WWE 2K15.

“The Grandeur, The Spectacle”

You’ve all witnessed the amazing screenshots; unfortunately, the rest of the game doesn’t look that great. Not as great as some other next-gen titles at least. And while the new one delivers a nice base for the future, it’s widely apparent that 2K has a bit to go before it even locks collar-and-elbows with its masterful NBA series. Some wrestlers, particularly those whom were body scanned in-house – Randy Orton, coverboy John “Super” Cena, etc. – look downright scary. In a good way. Some of the other folks, and even arenas, like NXT’s down in Orlando, make the game feel like last-gen all over again. I said previously that I wouldn’t mind paying for graphics, but, for the most part, this game didn’t even offer me that.

Jerry “The King” Lawler and Michael Cole may have logged several hundred new minutes of voice work with 2K15, but you can only tell the difference in Showcase Mode—which was fantastic with Good ol’ J.R. last year, anyway. Try Exhibition, or Universe, and the same, painful “Maddenism” one-liners are back and more.. maddening than ever before. Don’t even get excited for the brand new and hyped MyCareer Mode either; sure, the Man Formerly Known As Hugh Morrus is ever clear and present with his motivational persona, but don’t expect more than Tweets from the likes of William Regal and Triple H as your player squeezes through or gets squeezed out of the NXT ranks. The mode is as redundant as the UFC Fighter Career mode, which is the primary reason why I hardly ever play that once promising game.

Once again, NBA 2K15 outshines its wrestling counterpart with MyPlayer. There’s far more locker room jarring in that basketball game than this one, which is truly sad if you think about it. I mean, half of EVERY MONDAY NIGHT RAW is spent in the locker room. Everything I’ve ever dreamed of seeing in a wrestling games — backstage brawls, heated rivalries, and newfound factions/backstabs are hinted at in WWE’s MyCareer — is here, but never fully realized.

Showcase Mode this year is good. It’s not nearly as much fun as last year’s “30 Years of Wrestlemania” (which damn near saved last year’s bug-inflicted game for me), but it’s highly respectable. I honestly had no idea, as a man who hasn’t missed a RAW in nearly 10-years, that best friends Triple H and Shawn Michaels had that much of a rivalry; and, I loved how the CM Punk/Cena showcase is more about how those two were centerpieces during the Reality Era rather than epic rivals. In this mode, you play as all four wrestlers evenly, plus as a few other bonus wrasslers. The use of the WWE Home Video and improved, far more seamless cutscenes will definitely have players at home chanting “Yes! Yes! Yes!” as well.

“Man of a Thousand Holds”

So, how does it play? The Monsignor has mixed feelings about that, too. It wrestles like any previous WWE 2K/THQ/Yukes game, except that there’s a new “paper/rock/scissors” grapple contest added. While this logic definitely adds more realism to the game than the previous “punch/punch/reversal/grapple”, the new system doesn’t result in much. Little momentum swings over to the wrestler who wins the mini game, and the only noticeable damage comes from strikes while in the clinch—except with the UFC, it takes a referee to break up the monotony.

Punches and kicks are slowed down, and for the better. WWE games should feel slow/dramatic, since nobody in the WWE snaps jabs like Mayweather (except Mayweather…versus Big Show). The slower strikes definitely take some used to, as does the wresters’ newfound reduced stamina, but, best BOlieve this realism is all for the better. It’s pretty awesome to see a banged-up and flat-out exhausted CM Punk barely get an arm over a heavy-ass Ryback after a GTS, or a created Jeff Hardy struggle up every rung of a heated Ladder match. Despite its datedness, there’s more strategy with this year’s combat system than ever before.

Oh, and don’t get me started on that GODdamn pinning system. It’s terribly sluggish, and as bad as it was 2-years ago. I swear I want to put that damn meter in a Van Damninator. Plus, there’s no speed differential in the game between the likes of the most agile WWE Superstars like, say, Dolph Ziggler, and the slow and lumbering “Hall of Pain” himself, Mark Henry. You can still throw Big Show around like a Wrestling Buddy, too. OK—I’m definitely dating myself with that comment.

If you heard my diabolical rant on our WWE 2K15/Survivor Series podcast (<<<—mediafire link here!), you’ll realize that my problems with the game lay more with its fragility than its shoddiness. Flat out: The game is broken. 6-man tag team matches – be it normal, Royal Rumble, or Hell in a Cell – lag…OFFLINE. There’s an abundance of glitches and bugs, in addition to the fact that 2K decides to swipe out many of its match types and modes. But, more importantly, I would forget the Create-A-Diva omission, 25 CAWS (as opposed to last year’s 100 Create-A-Wrestlers), and lack of custom music (and its inclusion of a horrifying hip-pop soundtrack) if the game improved any, or if it didn’t ERASED ALL MY DAMN SHOWCASE ACCOMPLISHMENTS, UNLOCKABLES and CUSTOM PROGRESS again.

And that, my squared circle friends…still doesn’t seem real to me.

So you’ve heard the Monsignor layeth the smacketh down on what he feels is overall a candyass product, minus a few good moments sprinkled in between crashes, flashes, and gamebreaking data erases. But for this wrasslin’ fan from way back when the E stood for Extreme and PG was a dirty word, the gameplay improvements deliver the 1-2-3 on past versions of the game. Are their glitches? Sure. Nothing game-breaking for me on the PS4, knock on wood. Do I miss CAA and CAF as well as more CAW parts? In the words of the Stone Cold, Oh Hell Yeah!

But what we have in exchange, in what Moody told me about a month ago would be a foundation game just like NBA 2K14 that set the game up for greatness going forward, leaves me smiling like the King staring at “Puppies!”

The gameplay receives a sim boost that harkens back to the late, great No Mercy days via a new stamina system that makes you a storyteller in the ring as opposed to the arcade button masher of years past. Pacing is important. It is a bit slower, but you can still have a solid lucha-style match if you want. Just know that there are consequences now to gassing yourself out mid-match.

Another thing that greatly affects gameplay are the tweaks and additions to ratings that have been implemented in this year’s game. Each rating matters. A weak foreign object offense will make it harder to bust opponents open and limits the effectiveness of weapon attacks. Are you playing with a guy who has low aerial range? Good luck executing that Shooting Star Press, Brock!

There are some other new animations that make matches look and feel more like the product on TV that you too can see for just $9.99! Ahem.

Aside from gameplay, I’m having a lot of fun with Superstar Studio and the Creation Suite. CAWS finally match in-game superstars in terms of looks. Importing logos, face textures, and my actual tattoos has been a blast so far. I can’t comment on Universe as I am still working my way through MyCareer. This mode is a mixed bag for me. I love the RPG leveling up elements and times when I actually have rivalries. I’m not a fan at all of having boring squash matches in the performance center and being yelled at by Bill Demott who clearly isn’t commenting on the action in the ring. I also find myself bored at times when not much is going on. That aside, it is an overall nice way to build up a CAW. If nothing else, it is a good start.

And like Moody said, Showcase Mode is flat out awesome.

At the end of the day, the removal of the Diva CAW option and everything else that was taken out sucks harder than Shawn Stasiak’s career, but the gameplay overhaul and fresh coat of paint on the CAW mode will be enough to hold me over until 2K16. If this was year three of the 2K WWE franchise takeover I’d lead the one man riot. But as this is game-ground zero, I’ll extend them a bit of a break and enjoy the changes geared towards making this a true fully realized wrestling sim franchise for years to come.