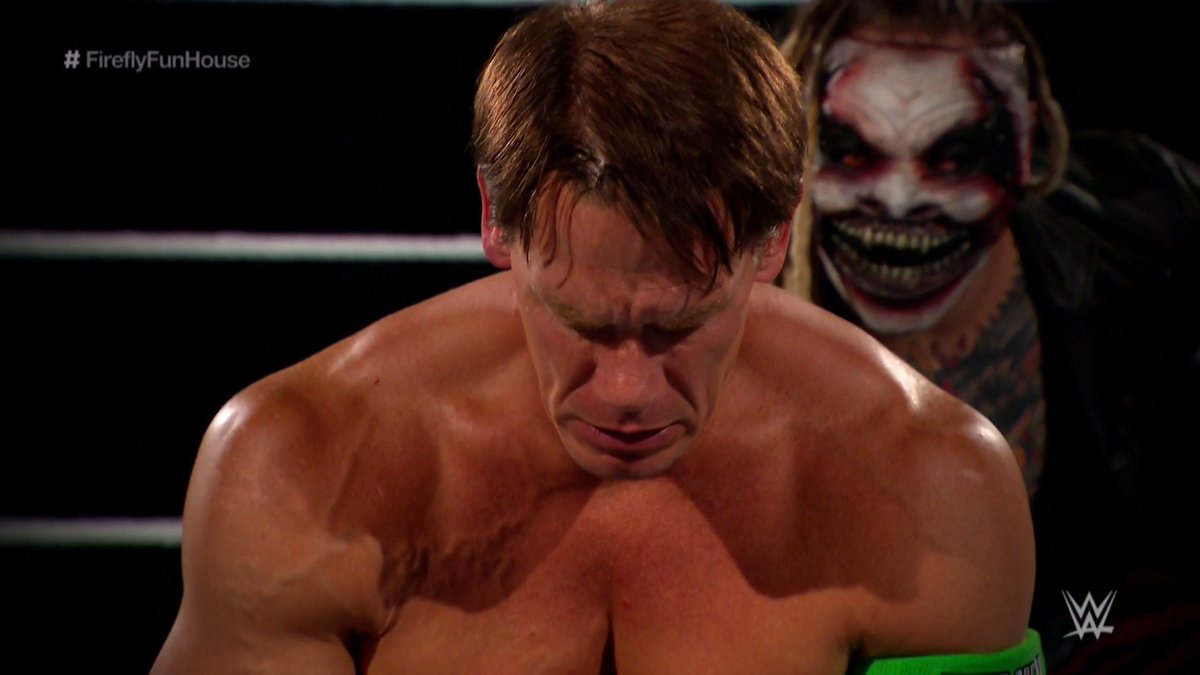 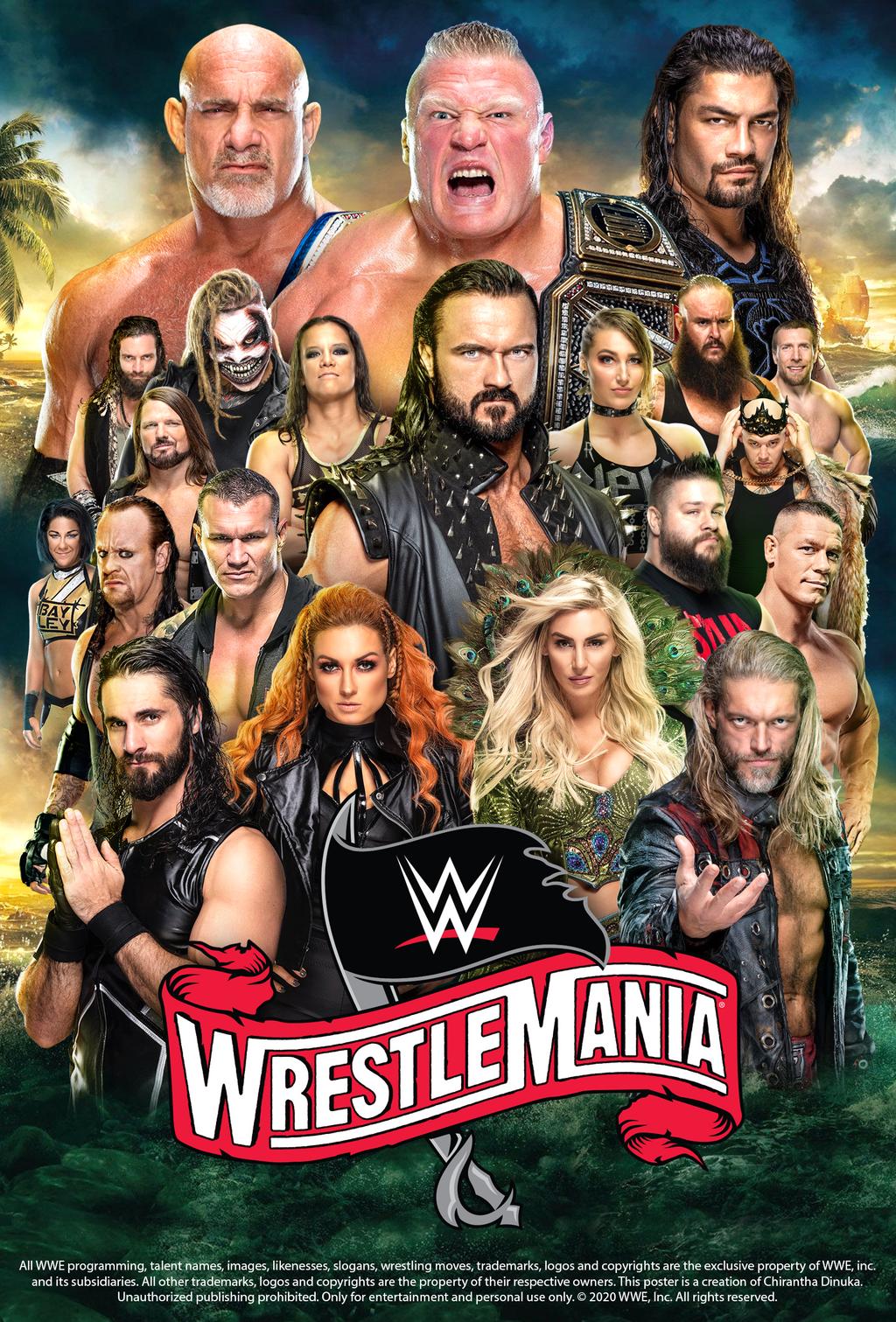 “Evangelical” DESTINY EDWARDS: Finally, we’ve arrived at Night 2 of the “Showcase of Immortals!” Considering WrestleMania XXXVI was taped and held in the Performance Center, last night was pretty darn good. I didn’t expect to enjoy the “Final Deletion” remake Boneyard match, but it managed to be both a decent match and great comedy. Well done! But can they keep it up tonight?

“Deconus Tercerii” FELIPUS CRESPORIUS: I was pleasantly surprised last night, and Marky Mark vs Alan gave us so much cheese. The ladder match stole the night, let’s see who gets that honor tonight. And who can forget that 5 Star/Bible Classic that Braun and Goldberg put on?

DESTINY: But you know it would’ve been 6 biblestars if it had been the right big (E) man slapping meats with GOLDBUUUURRRGGG.

DESTINY: A match that would truly break the scale.

FELIPUS: Pretty much what I expected. A little bundle of average. Cat Lady Natty lost, Liv won. Not a hell of a lot to say. I feel nothing, but I’m also not mad about it. – 2/5

DESTINY: Agreed. Liv has clearly improved in the ring and Natty did what she always does: put people over. It wasn’t a bad match, but it was definitely underwhelming. – 2/5

FELIPUS: I highly suspect Edge is winning and I feel it’s a huge mistake. Getting Orton back to his viciousness of the mid-2000s has been great. It would be a weird move to neuter him for a short term Edge run… but it is WWE. Also, Orton has been consistently wrestling while Edge has been away after his retirement… Why is Copeland the one that looks like hammered shit?

DESTINY: Well, Randall is usually on the road working. Edge is home with the kids, especially ever since Beth Phoenix started doing commentary. Only thing that will age you more than kids is being president. And Edge is winning– gotta have at least one feel good moment at EmptyMania.

DESTINY: Amazing the kind of matches you can have when you give people time. *stares pointedly at Becky vs. Shayna* This match was great. I loved almost everything about it: the trash talk, the back-and-forth, Rhea’s Vegeta cosplay. Everything but the ending. The Fed is just determined to have Charlotte be the one to beat her daddy’s record and they aren’t subtle about it. Guess once she loses this belt, she’ll show up in NXT UK since she hasn’t touched that one yet. – 4.25/5

FELIPUS: Oh, joy. Charlotte has gold again. Now that I got what I absolutely hated about the match out of the way, the good: what Destiny said. Another aspect I liked was that the majority of it was such a huge brawl. They just beat the crap out of each other, with a lot of shots looking really stiff. Last night’s ladder match is still my favorite, but this has been my favorite fight. The way the finishes have been going though (which I’ve been hating), Black, Lesnar, Edge, and Cena are winning. Anyway.. – 4/5

DESTINY: Why is this a thing? It was a giant yawn. Bobby Lashley was a monster in Impact! He came back for one thing and one thing only– to face Brock Lesnar. And instead he’s losing to a man who is probably more popular for having more cats than Natalya than he is for wrestling. It happened. It shouldn’t have. – 1.75/5

FELIPUS: The congregation knows I have zero love for Thomas Endison. The second his stupid, edgelord entrance started, I said outloud “what an asshole”. Sick of his “knock on my door, no wait, I left the janitor closet to look for fights” thing… And now Lashley comes back to put on a great showing only to job out to a sloppy “out of nowhere!” (stop trying to make it the next RKO, guys) roundhouse. I spread my cheeks and release my bowels all over this match. – 1/5

DESTINY: This wasn’t the best match and it had a screwy finish, but I’m okay with that. I lurve Heavy Machinery (#SteaksAndWeights) and Otis was the only reason I was even into this storyline. Almost everything about this match was predictable, but I don’t give a shit. The right person went over and seeing Mandy in Otis’ arms even managed to briefly warm my cold, black heart. – 2.5/5

FELICITUS: My feelings towards this match are not that different as the ones I had for Nat v Liv. Everything went as expected, match was neither stellar nor awful, and the person who should’ve won, won (which isn’t happening as much as it should). I liked Mandy actually kissing Otis. Was not expecting that, nice touch. – 2/5

DESTINY: You know what match would’ve benefited from an audience? This one. I can just imagine the reactions the crowd in Tampa would’ve had during this match. Randall was on his game. I hate that it takes special circumstances for him to care enough to put his working boots on, but I’m glad he wore them tonight. It’s been a long time since I’ve said this about one of his matches, but it might have been my favorite of the night and comes close to being my favorite of the weekend (last night’s ladder match just edges it out). It was fun and there were some cool spots (and some not so cool ones). I’ma need Edge to go back to retired life, though. He was looking old AF. – 4.5/5

FELICIUS: Ok, Flair vs Ripley was my favorite WM fight. Edge and RKO was fantastic; and the trash talking that also served to push the story further? So good (and kudos to Edge’s crying at the end, it really drive it home). Edge’s selling mixed with Orton’s stellar performance might have given us the match of the night. Randall is God-tier when he’s not putting out 3 star performances on autopilot. Why can’t I give it a full 5? I truly detest that Orton was put down with a move Edge used only once before… And not even in a match. – 4.5/5

DESTINY: Only mentioning this because it’s an official title change. Was there any doubt Gronk was winning? I’m fine with it; mostly because it got that ugly AF jacket off my screen.

DESTINY: This match was pretty much blink and you miss it. Angel Garza was great, as always, but for me the best part was my girl Bianca Belair coming in for the save after the match. It was way too short for anything to really get going, though. – 2/5

FELIUS: Much like the Raw tag title scene itself, I barely care about Street Profit matches. The best thing about them is Ford‘s frog splash and that he’s Bianca Belair’s husband. Angel Garza was the highlight, and any match featuring him gets a .5 score boost because of his intro theme. – 2.5/5

DESTINY: For the most part, we’ve been on the same wavelength, but this match is where we’re going to differ. I’m glad the role models won. We need more good examples of friendship in modern wrestling besides The New Day. The way Sasha came back for the assist and put the belt back around Bayley’s waist where it belongs was adorable and I have no choice but to Stan. Tamina being eliminated first had to happen obvs: she’s on the weaker end, talentwise, and they want to claim she’s a monster, so I enjoyed the moonsault sequence that took her out. – 3.5/5

FELIPE: Actually I’m pleasantly surprised at how that match turned out. I completely expected Sasha to turn on Bayley (as usual). Though I didn’t like that Tamina was shoehorned into the match just to have a “monster” in there for like 2 minutes. Two best friends stay together, another pair splits (Mandy and Sonya)… Awwww. – 3/5

DESTINY: That was the greatest thing I’ve ever seen in my life…this year. I’m calling it right now: MOTY. Give it all the Bibles. 10/5

FELIPE: Fear. Joy. Arousal. Confusion. Amazement. More arousal. Just a few of the things you’ll feel during this experience. MOTY? Nay. MEOTY. Multimedia Experience Of The Year. Whereas I would date The Boneyard Match, I would marry The Firefly Fun House Match. Enough bibles to fill the Library of Congress. Enough to fill the halls of the Library of Alexandria. There is no more Doom Eternal, no more Animal Crossing, no Persona 5 Royal, no FF7R. There is only Firefly Fun House Match. Thank you, Bray Wyatt. We love you, Fiend. – Infinity/5

DESTINY: It’s about damn time! I’ve already seen folks call it trash and complain about the length, but we got what we were gonna get. It’s been a long time since Brock has actually worked a long match– his entire thing lately has been just hitting dudes with F5’s and we’re lucky if we get to see him do a German suplex. This was exactly what I expected it to be — hard-hitting and short. I’m honestly surprised we even got a little reaction out of Brock when Drew kicked out of the F5 at 1. McIntyre going over when I didn’t expect him to raises this a half a point. Now I just need Heath to get himself together so we can have 3MB 2025. – 2.25/5

FELIFELI, FELI FELIPE FILLI FELI: I’m as happy for Drew as I’m sad that he had to capture the belt in an empty arena. This was Braun vs Bill 2: The Muscleing and I don’t know why people are surprised. Matches between two monsters are rarely long and epic (SHUT UP, DONOVAN AND KEITH! YOU’RE ANOMALIES). I’m just glad the belt is back on a full timer. As far as Brock is concerned, only two people bring out good performances from him: Cena and Rollins. On a parallel note – The most powerful factions have all had or produced world champions in their ranks: The Shield, Evolution and… Cmon, Heath Slater, time to add 3MB to the list. – 2.25/5

Thanks for reading! Stay safe, marks and don’t forget to WASH THESE HANDS.