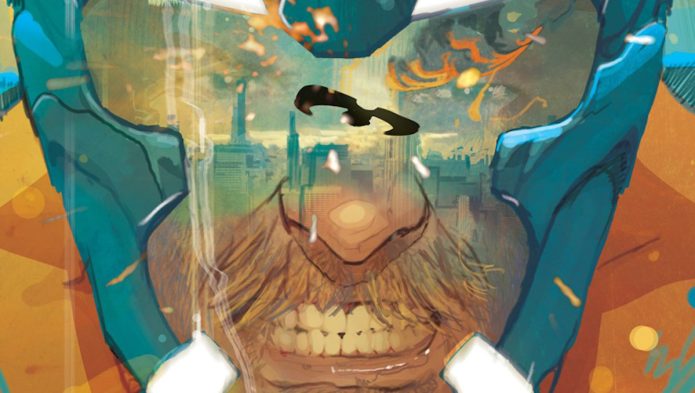 XO-Manowar #1 is a surprising comic. Firstly, being Valiant’s flagship character, they don’t reboot and change volumes as often as with Archer and Armstrong, Quantum and Woody, or the Harbinger characters, so an issue 1 is worth remarking upon in itself; but secondly, I haven’t read a Valiant comic in a couple of years, so I could have expected a dip in quality in line with Marvel and DC’s comics output, riven with auteur creators having their way, and editorial interference forcing far-from-complimentary changes and crossovers. I’m happy to report that a new Valiant comic is as good as it ever was.

We meet up Prince Aric in orbit, as he saves the city below from a plummeting alien spacecraft, causing millions in damage. When not superheroing about, Aric appears to be riffing on mid-90s Spawn and just hanging out with the homeless. His barbarian instincts and crazy demeanor aren’t winning him any friends though, whilst he and his suit Shanhara are walking blindly into a trap, but is it set by a friend or foe?

The yet to be released XO-Manowar #2 keeps up the action intensity and intrigue, as Aric learns that his approach to international relations could use some finesse – luckily, a rich industrialist has taken an interest in him and his public image. People familiar with comics might guess that doesn’t sound that lucky at all.

Dennis “Hopeless” Hallum (Avengers Arena, Spider-Woman) is at home here, giving this tent-pole comic an indie feel, and with neither a dumb nor a brilliant story conceit to kick things off, it all feels very natural and realistic. Couple this with the stellar splash pages of space fights and warfare mixed with downbeat street scenes and dialogue panels, it all could be jarring to read… 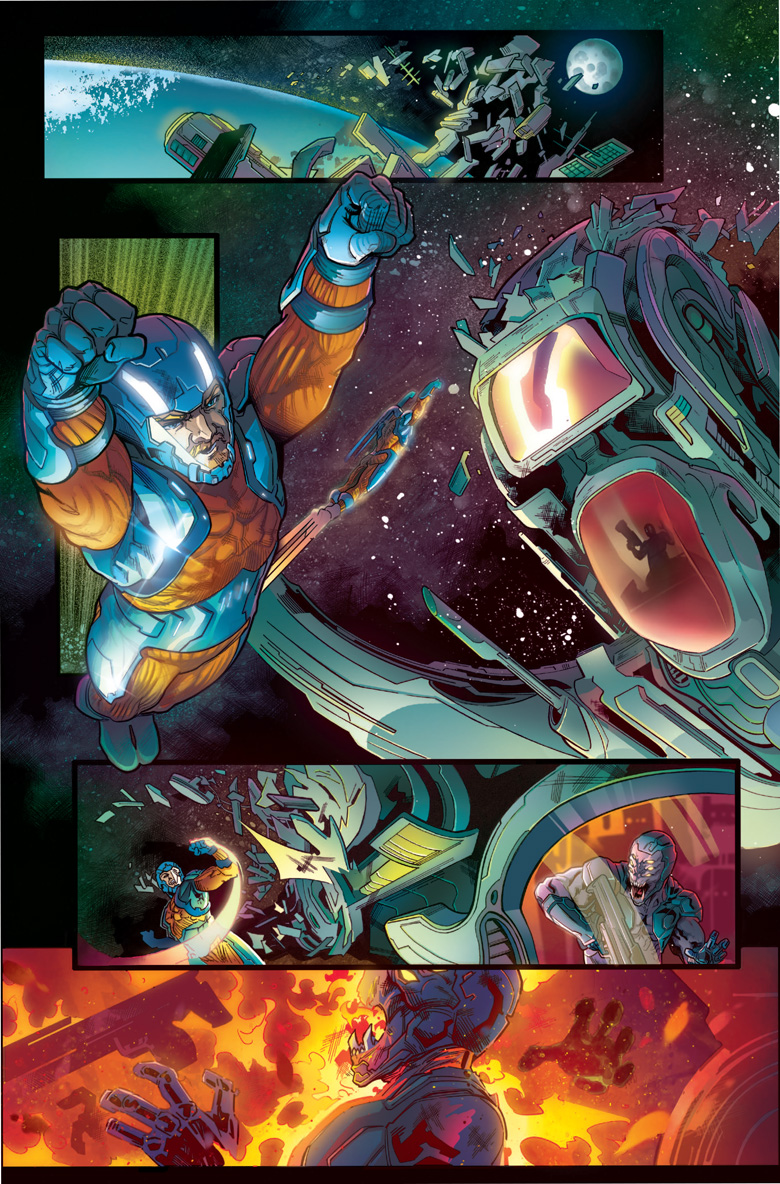 But, when presented by the fluid and detailed art of Emilio Laiso (Star Wars: Doctor Aphra, Spider-Man: Velocity), it plays seamlessly and takes you for the ride. Valiant Comics have rarely put a bad book out, and the new volume of XO-Manowar is as well done as one could expect. It pulls no punches, panders to no-one, keeps it simple, limits the meta-commentary, and just fucking rocks.

XO-Manowar #2 also comes in a cool black-and-white variant artwork issue, with an almost Sin City crossed with the David Aja Hawkeye issues aesthetic, which is also worth looking out for

For those devoid of their inalienable rites of carnage, Marvel’s Road To Empyre: The Kree/Skrull War #1, might prove to be an extra-special primer of the terrestrial kind. Robbie Thompson (Silk, Venom: Space Knight) brilliantly wordsmiths an 11th hour Skrull Family mission that’s genetically-spliced within the historical framework of the Kree/Skrull space/time continuum, as though he’s surgically transposed laser-cut vivisections of dueling, celestial stranger flesh pilfered straight from Area 51.

Mattia De Iulis’ (Invisible Woman, Jessica Jones) artwork delivers near-photo-realistic depth and such relatable vulnerability to the Skrulls-in-disguise Warner Family as they move to track down their mortal Kree enemies who are trying to expose them to Earth’s meta-human heroes, that you can’t help but hope they kill ‘em all; and Javier Rodriguez’ (Daredevil, Fantastic Four) and Alvaro Lopez’ (Catwoman, Breach) flashback passages drop Jack Kirby-inspired liquid psychedelica pupil’s-deep into your eyeballs while revealing forbidden acts of interspecies procreation from the recent past that may bring about cosmological cataclysm in the immediate future. 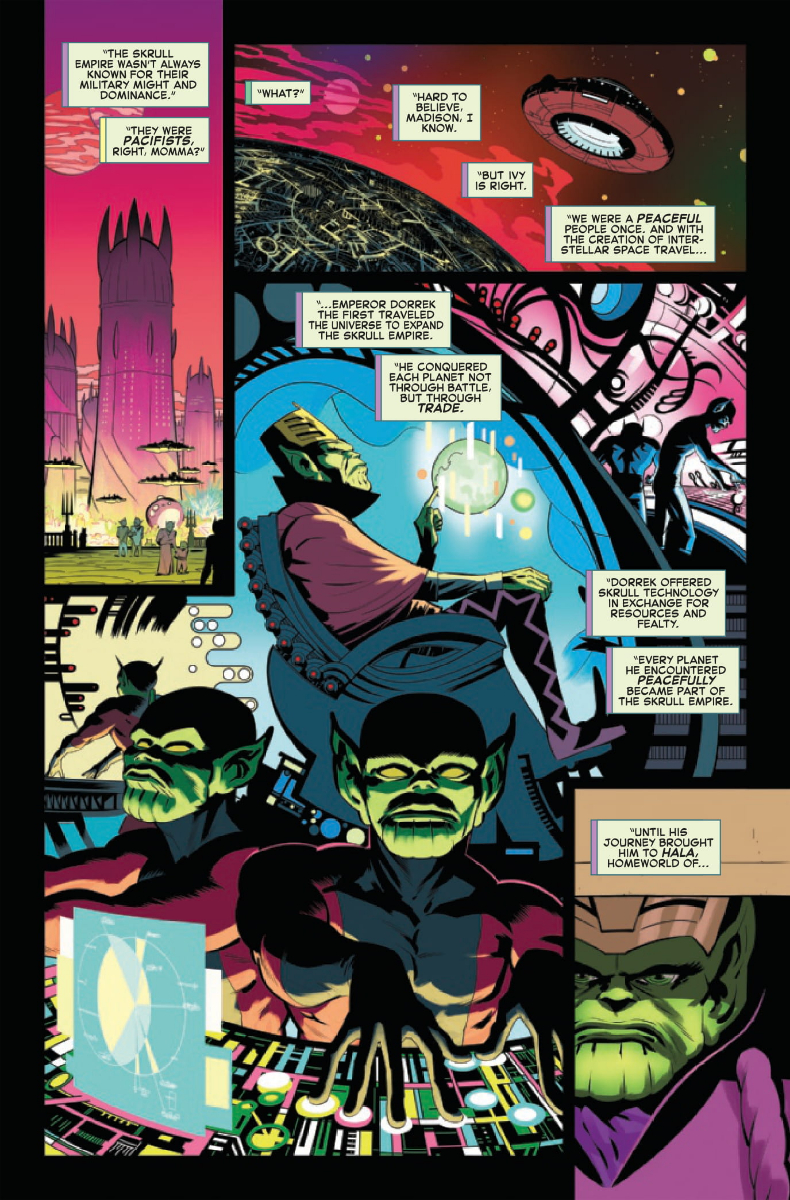 If you suddenly found yourskrullf made by your own mortal enekree within the confines of what you thought was your latest safehouse, and the mega-detonator on the wall was about to strike 0:00 seconds, would you eat your own flesh and blood to save them??? And what if they didn’t taste so good going down??? Could you push them bowels-deep and hold them there??? Or might everything come up in a horrific blast of gamma-green-looking chunk spew??? And who’s gonna be left standing to clean up this gawddammd mess, anyway??? What a Mar-Vell it may be… 4.5/5 Kree-Dense Skrullwater Survivalists.

“They say our world is a fascist’s paradise of Draconian laws enforced by unthinking executioners.” With that line, Eisner nominated writer Brandon Easton held a mirror up to today’s society and crafted a tale that had more relevance in a sci-fi tale than any non-fiction book I’ve read in quite a while.

The story of False Witness #1 focuses on a courier who has equal part street smarts and tactical mind who could have been fellow Judge had he not washed out of the Academy. He’s carrying something valuable through a riot that erupts between anti-immigrant protesters, and innocent poor folks trying to survive. However, once Dredd gets involved, it hits the fan. Easton’s deft pen weaves the political subtext in without slowing down the breakneck pace of what is a hellacious chase throughout the book. His Dredd sounds pitch perfect, and his sparse usage in the first issue left me wanting more. 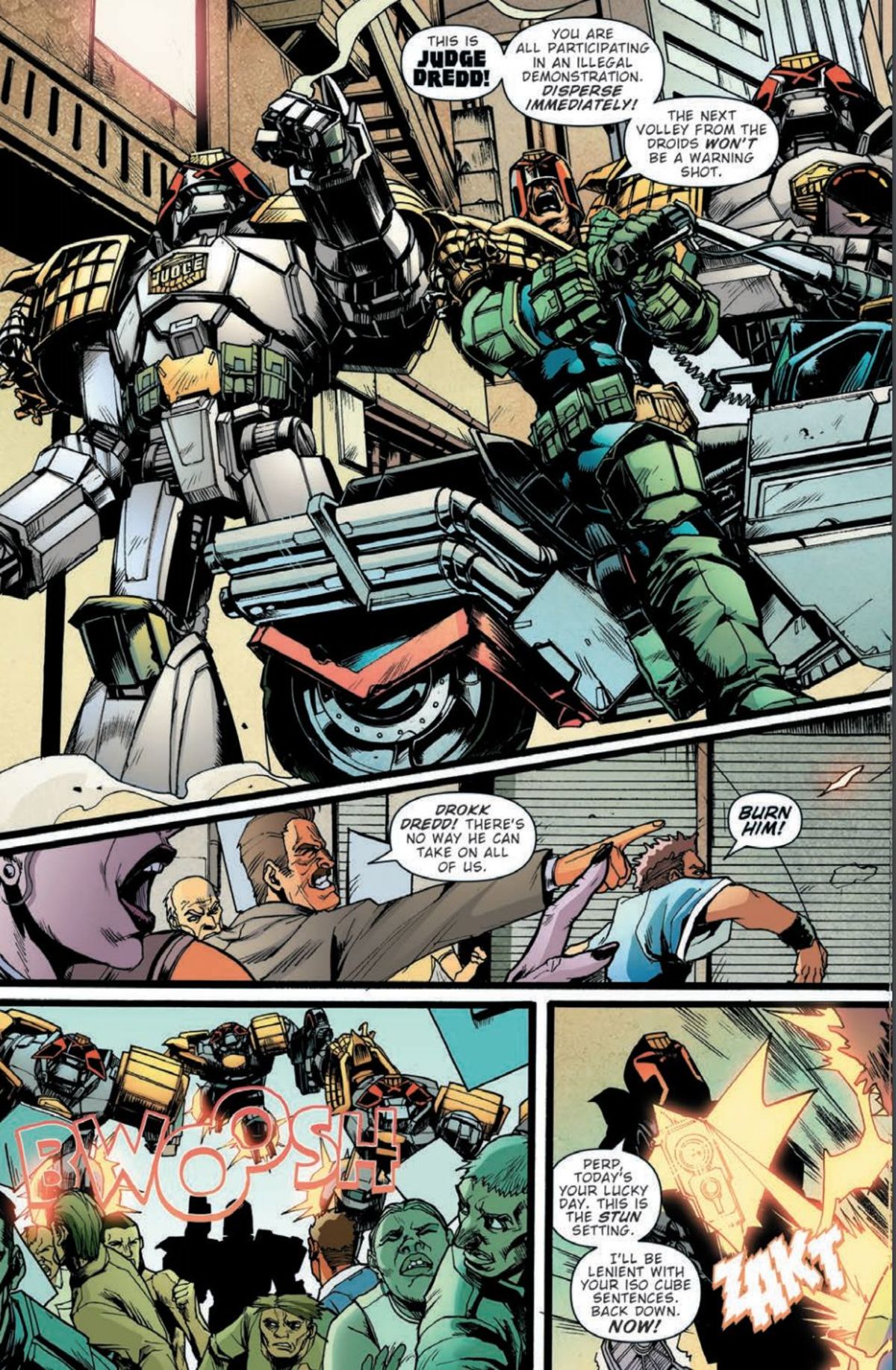 Death’s Head, and Transformers artist Kei Zama brought a grimy animated style that felt right at home with this franchise. Facial expressions all felt real and pulled you in. A few panels did rely a bit too much on shadows and it made for a few confusing scenes but overall the pencils were strong. Colorist Eva De La Cruz walked the fine line between the dark and shadowy sewers of Mega City One with the bright and gaudy lights of some of its more affluent sectors with aplomb.

It has been at least a decade since I was this pleased with reading the tales of Judge Dredd. I am on this crazy ride until the bitter end. 4.75/5 Bibles.