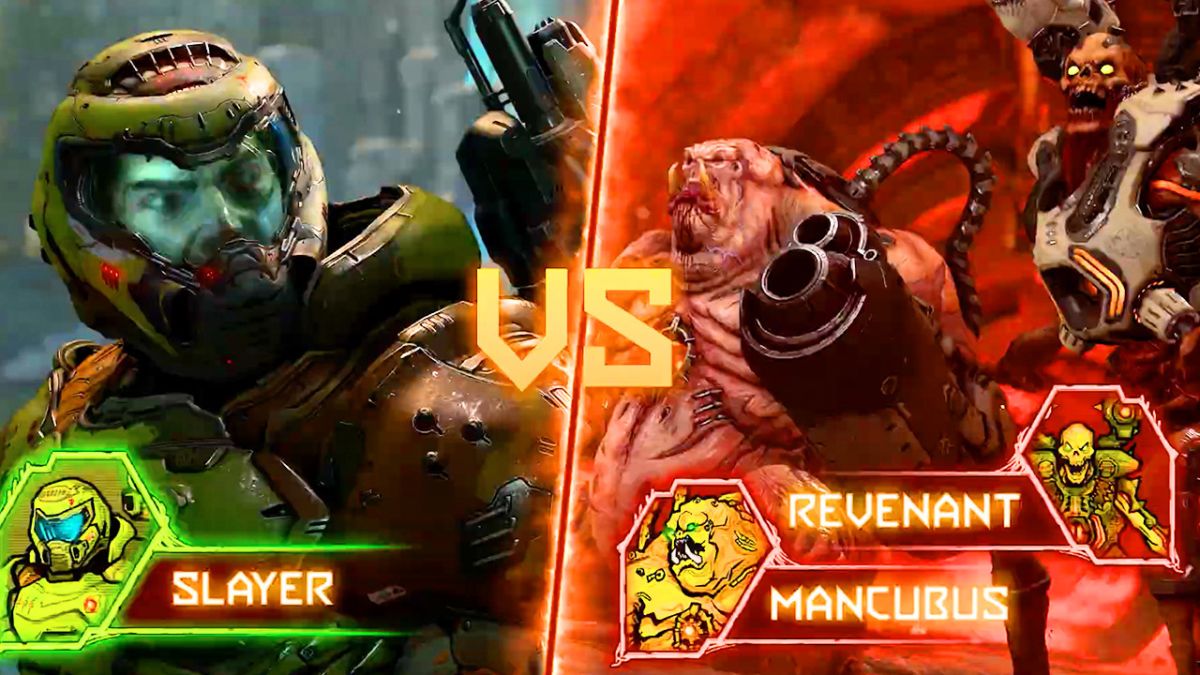 If you treat Doom Eternal’s Battlemode like a supplemental part of the game, it’s a fun little mode to play when you need a break after one of the long levels in the main campaign. There’s only one multiplayer mode that is 2v1, two monsters versus one slayer. The monsters include the heavies in the main campaign, such as the Revenant, Pain Elemental, Archvile, Mancubus, and Marauder. Whoever wins the most rounds wins the match, and in between each round you can add a perk such as increased health, team healing, buffed minions, or access to the BFG.

The main allure to Doom’s multiplayer mode is playing as the monster. Not only do you use some of the abilities the monsters have in the main campaign such as summoning a spectral dog as the Marauder, you also play as a tactician as you could summon minions (e.g. Hell Knights, Prowlers, Makyr Knight), lay out hazardous elements like acid, or place down a healing space. I haven’t played long and well enough to know which monsters are best paired together, but you can make any monster you choose play offensively or defensively by modifying the loadout.

Playing as the monsters is the real fun in this multiplayer mode, but the problem is, I almost never lost when playing as a monster, which may demonstrate some balancing issues. I also felt some monsters were way more effective at winning than others. You had to be a damn good Doom Slayer to win and even if you were good, playing as the slayer just wasn’t as fun because you have the same abilities and weapons that you did in the main campaign.

You unlock cool little cosmetics items like weapon or slayer skins, backdrops for your loading screen, player icons, and poses for the opening scene before a match. It’s a very basic, but cool little mode that’s a fun little change of pace if you play as the monster. 2.75/5 Bibles.

DEE ASSASSINA: Have you ever completed a task like cooking, cleaning, paperwork, or something that felt so much more pleasurable because the music you were listening to put you in the zone? That’s kind of what Doom Eternal does, except insert the destruction of demons that feels like pure bliss when supplemented with a mix of good ambient and metal music. You’re surrounded by demons in a small space, you feel claustrophobic, shit gets hectic, then you hear the tune, get in the zone, run, and kill. You’re running through tunnels littered with skulls, caves filled of acid, and there’s blood and guts everywhere. This is Doom…

TRAVIS MOODY: This is Metal. Dee & Company, due to how fucking intense everything is.. not only in iD Software’s sinister follow-up to the great 2016 Doom but with the majority of the country hell’d-up-in-quaran-life, Doom Eternal arrives at a.. strange time. Half of the gamers tied to their rooms for the next few months probably hail from two camps: 1.) Fuck this, fuck everything, I shall unleash my Doom on these harrowed demons!, 2.) Things will be OK, and if not, I can at least make them OK in this #animalcrossinglife. Personally, my mental zone falls between the two. So as downright amazing as the Doom sequel is, I just can’t get myself to slay through hell much more 2-3 hours (i.e. one mission) at a time. I need to relax. Dragon Quest XI has been relaxation.

JAMISON WEIR: Oh, I hear you. Bethesda should have called this game Doom Adrenaline. Even during the sections where you actually get to slow down for a second and search for secrets you’re still jacked from the last encounter. So True, Dee– Mick Gordon and his “metal gospel” put on a show that’s an instant early front-runner for Soundtrack of the Year. The deep, rumbling 9 string guitar is practically a weapon of its own, punctuated by throat singing and screams of anguish, pain and horror.

DEE: Yesss. This isn’t just any action-packed game filled with mindless fun, Doom Eternal has the best first-person gameplay I’ve ever experienced, thanks to iD Software’s fast shooting mechanics, mixed with an extremely vast arsenal of weapons with powerful upgrades. Each demon-filled area feels like a new puzzle because as you progress, they throw more demons you’ve previously slain and new demons that have unique weaknesses.

MOODY: Those bastards. But, really, at least Hugo Martin and his crew gave us enough of an arsenal to.. barely survive. There’s no doubt that part of the whole rush of Doom Eternal is running around like a mad man, doing your best to simultaneously avoid the most lethal demons while conjuring up exactly which gun to choose at what moment. Speed, rattling gun-spray, loud rocket blasts and a terrorizing score is prevalent, sure; but the the focus on mechanics complete the madness to a tee. In this sequel, superior agility and calculated movement takes precedence over explosive power.

DEE: It’s muscle memory AF. I had to be cautious when to use frag grenades just in case I needed to feed it to a Cacodemon, or make sure I left my shotgun sticky bomb mod to break off an Arachnotron turret, a Mancubus arm cannon, or a Revenant’s launcher. I would always make sure to keep some Zombies, Imps, or Soldiers alive so they could be glory killed for health, burned for armor, or chainsawed for ammo. I tried to use my plasma rifle sparingly for shielded enemies or my ice bomb to mow down the heavier enemies, and the possibilities goes on. I never stopped moving and my neurons never stopped firing.

JAMISON: Combat is about two things: enemy priority and resource management. I love what they’ve done with Doom but there are lots of people who think it’s going too far off the “how it should be path”. Every enemy has a weak spot or weak to a certain weapon (I find auto shotgun melts pretty much everything). My brain can’t process how Whiplash moves so he ended up being my least favorite enemy. Either him or the fuckin’ tentacles that get you every time.

DEE: Ha! Then there is the slight platform controversy, where  actual puzzles are used to traverse the demon-filled Earth. Don’t know about you two, but I found them to be a nice break from the chaos.

MOODY: Oh, the platforming in no way pissed me off as much as it did in Control during those brutal assaults. Fuck. I still haven’t gone back. But, ayo.. what’s with all the codex? Doom 2020 is the most intense ride we’ll have on Xbox One, PlayStation 4 and PC all year and iD want us to.. read a bunch of stuff. I began the game digging into all of the literature and learning the ins-and-outs of hell, and.. yeah.. that didn’t last long. Short video-like clips for every enemy, weapon, landscape and item acquired would’ve immersed me more into the story.

DEE: Well, at least if players explore enough they’ll be rewarded with upgrades for their arsenal and Praetor suit, and — better — find cute little toys like we did in Doom 2016, but instead of different color Doom Slayers, there are different toy demons. The toys, along with some music records are all available for your viewing and listening pleasure at The Fortress of Doom hub area. In this area you can use Sentinel Batteries to unlock rooms with upgrades, or with different Doom Slayer skins. I’m still eye-balling that all black skin that’s just outside of the main fortress area. There isn’t a single activity in Doom: Eternal that I don’t feel rewarded for completing. 4.5/5 Bibles.

MOODY: Yeah, other than all that nitpicky reading stuff, the game appears damn near perfect. Through seven/thirteen stages of hell, Eternal feels perfect mechanically, looks deliciously perfect on a 4K set-up, and booms off the surround oh-so-bloody F’N perfect. So other than dropping at a strange quarantime when all I wanna do is relax, mellow out, escape from harsh realities and not get COVID-19-esque symptoms from playing such a hellacious title — yet not head to the extremes of crossing Tom Nook — my favorite title from E3 2019 is an easy frontrunner for the 2020 GOTY. 4.5/5 Slayer Vinyls.

JAMISON: In the end, I hate to say it, Moody, but you were right: this not a game that can be binged for hours. But despite it being the single most intense game I’ve ever played, I too crave my next hit of Doom Eternal. 4/5 Unfinished Bibles.