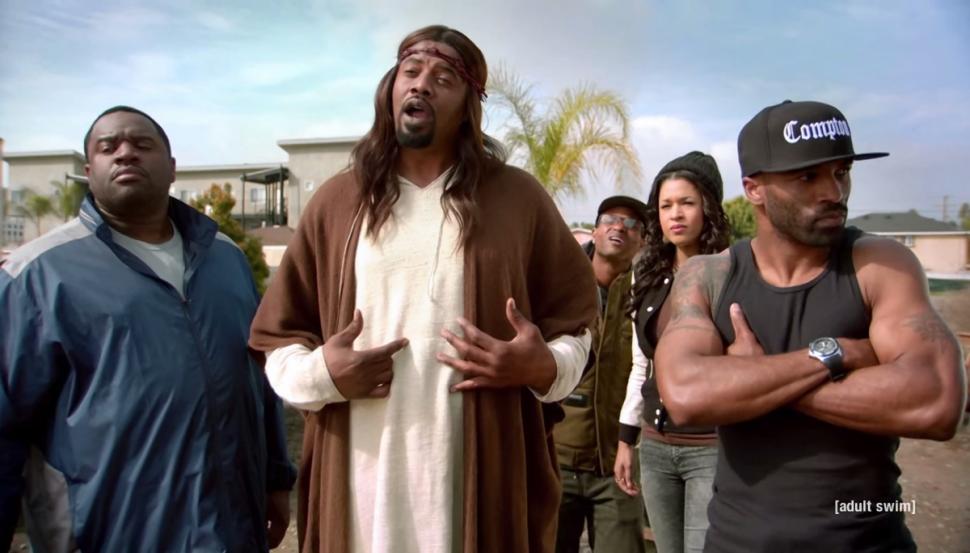 To anyone that’s seen Aaron McGruder’s The Boondocks or Mike Clattenburg’s Trailer Park Boys, Black Jesus, their newly co-created show on Adult Swim, is quite tame and far from controversial. Sure, this Jesus chills in Compton with broke potheads and unemployed alcoholics, but he’s still all for peace, and goodwill toward all men – even if that means turning some water bottles into Cognac for the penniless homies at a barbecue…

This version of the Second Coming (Gerald ‘Slink’ Johnson; or “Lamar” from GTA V) isn’t played up for the same shock value laced with the “religion is absurd” sentiments of the assault rifle brandishing Jesus of South Park. Black Jesus is more of a commentary about the Christians who say that Jesus is their homeboy, but then choose to make bad decisions in front of Him (literally – in the show’s case).

What makes the show work is that the jokes aren’t about Jesus, these jokes are coming from Jesus. This ghetto Messiah has to be more earthly to be relatable…

Black Jesus isn’t afraid of God’s more ‘herbal’ pleasures either, and certainly doesn’t hold back on the language. He even lashes out against people when he’s mad; but even when he gives John Witherspoon’s (Friday) character a good “fuck you too, homeboy,” he still can’t help but to say “I still love yo’ bitchass. By default, fool.”

This person is us, just a better version of us – which makes it more appealing to want to be more Christ-like.

The only downside to the volume of great jokes in the show is that there isn’t enough time to go deeper with the themes that a premise like this can reveal. Now that the pilot is out of the way, McGruder can hopefully infuse the teachings of Black Jesus with the same social-commentary that won The Boondocks a Peabody Award.