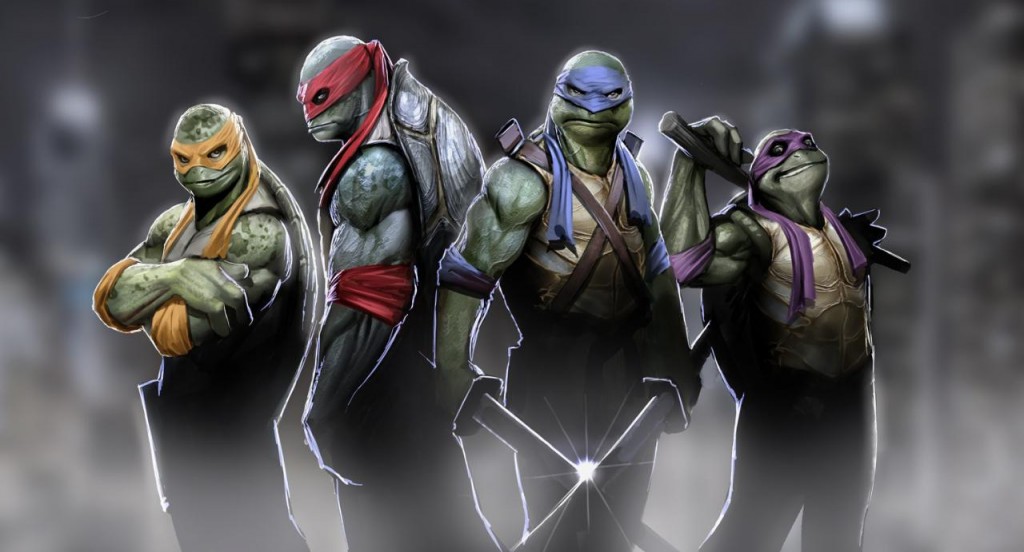 The “Deacon E” Esko and “Monsignor” Moody are back with another edition of Geek vs. Nerd.

You may have remembered our not-so-much-a-squander that was our EA Sports UFC “Face-Off”. This time, we may have a little more to twist tortoise shells about, as the Teenage Mutant Ninja Turtles franchise means a little more to our nostalgic hearts…

So cue up the theme…

GEEK – The biggest Ninja Turtles fan back home at “my mama crib” is no longer yours truly. No– my niece, Ariana, screams over to the TV the second her beloved pizza-eating green guys on Nickelodeon are ready to bebop and rocksteady.

So, as your birthday boy watched an early preview of producer Michael Bay’s new re-imagining of TMNT, I asked myself: “Is this film fit for my 6-year old niece?”

The answer is both a resounding “Yes”…and “No!”

First, the “No!”: This movie is rated PG-13 for sci-fi action violence. These aren’t the cuddly-wuddly Ninja Turtles of the 80s and 90s. There’s nothing really adorable about them, at least right away. They’re massive, they’re mean, and they’re made to strike fear into Foot Clan– the worst criminals New York has seen since the last crime-tinged movie in New York (all of ’em). They’re mutated turtles. They look mutated. There’s nothing pretty about these reptiles, other than a touch of Michaelangelo’s #NerdSwag.

These Turtles just ain’t for kids.

Thing is, their bubbliness grows on you as the longer movie goes (which only runs at 101-mins; a record for a Michael Bay-produced film?). One scene that rings a shell in particular, also happens to be one of the coolest 3D sequences I’ve ever watched. It’s a chase scene unlike no other. Without divulging too much — in the case of any spoilers, you sensitive clergygeeks — the TMNT are basically doing their best Cool Runnings rendition. It’s a series of riveting action scenes, where the Turtles have to shell-sled down a mountain during a getaway with The Foot. It’s lengthy, and every moment had me inching off my seat. It was also during this time when the Turtles finally began to charm me over.

I also just knew my niece would love the scene, thus giving me the defeated impression of “all..right”. Or “allllllRIGHT!” as Michaelangelo would put it. As their adoration for April O’Neil (an actually respectable Megan Fox) grew, so could I see smaller children warming up to these freaks.

But you see, that’s the other thing. Mikey (Shameless‘ Noel Fisher) is really the only Turtle that shines, or resembles any of the Turtles we grew up and loved in any generation. I almost wish that Paramount would have just used the voiceover guys from the current hit animated series, since they’re both Nickelodeon studios anyway (I’m sure there is some paperwork out there that prevents this from happening, but still…)? The TMNT cartoon cats — Sean Astin, Greg Cipes, Rob Paulsen, Hoon Lee, etc. — all do a terrific job and would have brought a much higher likability factor to this film.

ESPECIALLY Hoon Lee! I’ll let the Deacon E preach further, but Tony Shalhoub as dialect-confused Splinter is a huge “No!”

Another huge “No!”  is in how all these new origin threads fit like a glove. It’s almost insane how everyone is someone’s father, someone’s father’s friend that betrayed him, someone’s pet that just so happened to… You get the gist of what I’m saying. With this 2014 TMNT film, everything feels far too convenient.

Back to the performances — because honestly, I care more about that with this film than plot — allow me to say that Donatello was and is still very much my favorite on the animated series. Yup. Get ready Daniel Bryan fans… the vocal performance from Jeremy Howard (Galaxy Quest) is also a huge “No!” Making Raphael (Alan Ritchson) sound like a pissed-off hoodrat who totally effs up the most notorious catchphrase of the franchise? “No!” Will Arnett (The LEGO Movie) as April’s sleazy news camera-sidekick, instead of a “McLovin” type that would have helped balance out the film’s overall testosterone? “No!”

Odd thing about all this is, I didn’t mind so much how the TMNT Bayverse looked as so much how it all sounded. Most of the fight scenes are pretty rad, despite the fact these “ninjas” now rely on their Superman strength and Batman scare tactics (to which both are none-too-ironically referenced in the film). Cars get blown up. Towers get knocked down. Sure, Mr. Bay, I get that you want to re-imagine everything so much nowadays as “hardcore” and “bad-ass”; but don’t forget that we grew up with such properties as Transformers for their warm heart as much for their cool persona.

NERD – Michael Bay, what the foot have you done to my childhood!!??

You didn’t even wait for the opening credits to end before you started slicing up my beautiful memories like some sort of pre-pubescent pizza. I don’t even know what that is, but I’m so p***ed, I’m just gonna keep yelling.

The first thing you hear is Splinter’s voice, but does it sound like Splinter? Of course not. It sounds like some Welcome-to-moviefone-please-press-1-for-english-once-upon-a-time-in-Narnia-now-its-time-for-the-weather ass narrator.

Splinter is clearly having some sort of identity crisis. His voice goes from standard american white guy in general conversation, to an Italian chef when discussing pizza, to a wise Japanese sage when discussing martial arts and history. Who designed his face? Splinter shouldn’t look like a rat chef from Ratatouille who lost his job in Paris and moved to New York to be homeless. I’m just as disappointed in Michael Bay’s Master Splinter as I am in the origin story they try to force feed me as truth.

According to Michael “Murder Your Memories” Bay, the Turtles and Splinter were part of an experiment in a lab that caught fire. April O’Neal saved them…kind of. Most kids that save animals bring them home. Not April. I was completely Shell-Shocked to find out that she took them from the lab and dumped them in the street– with zero fuhs given.

The experimental ooze they were injected with made them big, strong, and mutanty. I’m not a Genetic Science Genius (GSG?), but I’m pretty sure experimental ooze doesn’t make turtles grow human-ish lips and noses. Never in the history of ever have the turtles looked so human and I so strongly disapprove. Splinter found a book and taught HIMSELF Ninjutsu in just a couple years. He is also well versed in ancient Japanese culture and spirituality.

What a load of Cowabunga CRAP!!

The fact that Miss O’Neal was in the lab, saved the turtles, left them in the street, and is now the first and only person that knows about them as teenage vigilantes is just way too coincidental to me. I frackin’ hate it, and that’s all I’m gonna say about that.

As far as the turtles talk goes, their voices aren’t ideal. However, like Moody said above, they should grow on you as the movie progresses. Donatello looks like a mutated version of Blankman, and has built a magical indestructible bow capable of flipping an SUV speeding down a mountain. Wait.. what? Michelangelo has all the best lines and Raph is just as bad-ass as he’s always been. Leonardo (voiced by Bad Grandpa himself, Johnny Knoxville) was cool too, I guess.

Trust that the Deacon E is trying his best to understand and accept Shredder wearing robotic armor, so I’ll let that slide for now.

It really bothers me that the turtles are 100% CGI. Although– they are VERY well done. The motion capture is on-point and the colors and textures of each turtle is top notch. If I was 5-years old, and this was my first introduction to a TMNT movie, I would be completely excited to watch it over and over. Unfortunately, I’m not 5, and I have a set of hard coded Ninja Turtle values and expectations that I demand be upheld for all eternity.

Keep your filthy big budget hands off of my blissful childhood hero memories.