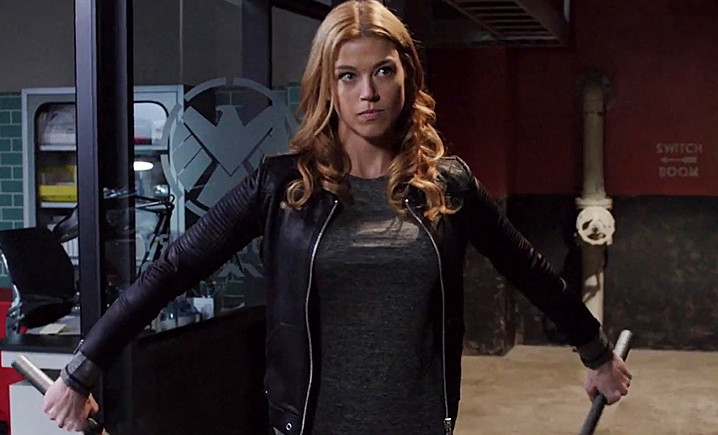 Stop whatever you are doing, invent a time machine to travel to the release of Mockingbird #5 and please tell me WHERE IN THE NAME OF HOLY HELL THE PING-PONG BALLS ARE GOING!!! But in all seriousness, go out and pick up a copy of Mockingbird #1. By far, this is one of the most intelligent, insightful and insane pieces to grace the newsstands, virtual or tangible.

Writer Chelsea Cain weaves a bold new look for a once minor character, giving her fantastic extensions without dying her roots. While Barbara “Bobbi” Morse can still hogtie criminals with Gordian knots, her chemical romance seems to be making her more human than human. Blending a few shots of Infinity formula with a super soldier serum taken straight out of the ice makes a frozen concoction that helps me hang on… the edge of my seat as I eagerly await the next issue. The story is incredibly crafted, using the right amount of TLC to make the WTF seems as simple as ABC. More accurately, it’s easy as Pi. With so many layers, this puzzle box forces one to read and reread, uncovering new treasures on every pass.

Speaking of treasures, artist Kate Niemczyk is a true gem,
incorporating action and irreverence into one fantastic panel after another. From the Kubrick carpet to the Cthulhu crew-neck, the optical Easter eggs are like candy from a windowless van for the mind’s eye. Not to be dismissed is color artist Rachelle Rosenberg. She hits the tone right in the bull’s-eye, almost as if her color palate was stolen from Clint Barton’s quiver. They are like a visual Voltron, forming ferociously from Cain’s material. All together, Mockingbird #1 is a refreshing work of light-hearted intensity that will tickle your neurons and question your health coverage.

With More Than Meets The Eye #50 touching upon this week, your Traveling Nerd Apostle decided to reflect back at last month’s Transformers #50. Why? Because GodHatesGeeks is why.

This double-sized ish begins a brave new story, “All Hail Optimus,” which takes Prime’s decision to withdraw from planet Earth. Splintering and falling apart (along with Galvatron’s constant aggression), OP plants his flag and takes the Earth under his protection. Yet, how will Earth take to a new overlord only recently finding freedom from Megatron’s dictatorship?

John Barber (Ultimate X-Men, Ultimate Fantastic Four) does an excellent job painting the Transformer’s world in shades of political gray, which seems like perfect timing. After “All Hail Magetron,” IDW did away with the good vs. evil of the Transformers world, instead painting characters with true paradigms of virtue and evil with in-between allegiances. For example, you have usual Decepticon Soundwave who just wants to live in peace having recently being duped by Galvatron. Or even Prime, who has never lost his freedom-loving goals, deals with the guilt and feeling of responsibility for poor choices that have had bad reactions. Barber implores impressive rationale for all characters, allowing you to side with even the most wrong of choices.

This milestone issue is also very well written and paced, making a superb jumping on place for new and old robot fans. And yet while the larger issue does include a ton of various inkers and colorists, ‘Formers #50 is fully illustrated by the talented Andrew Griffith (G.I. JOE). He draws tight emotional scenes with impressive panel arrangement and dynamic scenes of cinematic horror.

See you next month when I finally pick up the right Transformers #50 that came out last week. 4.25/5 Robo Thumbs Up!

As Jim Gordon continues the mantle of Batman in Gotham — while Bruce gets over his Post-Traumatic Joker syndrome — Detective Comics #50 sets him on the case of a very peculiar and conflicted serial killer. Writer Peter J. Tomasi (Green Lantern Corps) really puts the reader in the mind of a homicide detective, as readers try to figure out the killer’s motives along with Gordan; yeah–I still can’t get myself to call him “Batman”. It’s a classic suspense tale of serial killer “pattern following”, with Gordan continuing to track the killer through landmarks until he bestows upon that final piece: Heroes–people who become heroic from circumstance.

However, Gordan still has to figure out the “why.” Why is this mad man targeting these heroes? Once you read and discover the killer’s purpose, you’ll realize just how much this guy has lost his grip with reality. If nothing else in D.C. #50, the messes you’ll be cleaning will likely have you pondering why “God hates geeks”. 4/5 Bibles.

Friends, I bring tremendous news: history’s most depraved, super-strong, immortal reprobate Armstrong; and the world’s most naïve — yet dangerous — psiot Archer return to our comic store stands this week with Valiant’s A&A: The Adventures of Archer & Armstrong #1!

Long have we wondered what happens next for our daring duo since their hilarious crossover with Quantum and Woody, and after their vital contribution to the forces of The Valiant, and now we know: Armstrong gets drunk, climbs into his magical bottomless satchel looking for some priceless Islay Whisky, and Archer has to climb in after him. It’s a story we can all relate to. 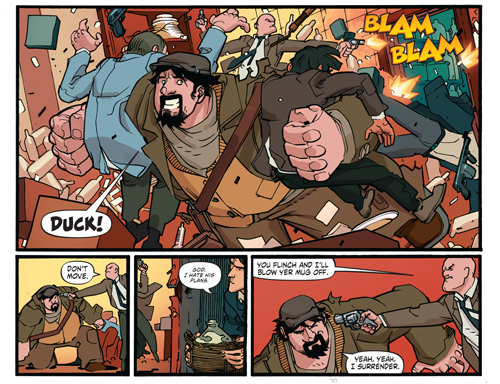 Rafer Roberts (Plastic Farm, X-O Manowar) ably picks up from previous Archer and Armstrong scribe Fred Van Lente, imbuing the characters with every bit of dysfunction we’ve come to love. This is all writ large across the vibrant and action-packed splash panels and stylised, sharp-edged lines of the artwork of David Lafuente (Ultimate Comics: Spider-Man). It’s all cartoonish good fun, as Armstrong is a man on a mission, seemingly oblivious to the ancient threats poised to exact revenge for when he banished them to the bottom of his satchel.

Lafuente’s Spider-Man pedigree is on display neatly, with Archer’s acrobatic fight moves popping off the page, and goblins aplenty adorning the landscape. As usual from Valiant, this is great stuff and I’ll need more, possibly in the next few days, maybe even before this one wears off. Without a hint of exaggeration, I can assure you that buying this comic book will essentially be the best decision you’ve ever made. I mean; will it make you rich? Unlikely, especially if you keep spending money on comics. Will it cure you of disease? Probably not, you’ll still die somehow. Will you learn much from it? Definitely not; it’s a bit silly.

See what I mean? It’s perfect.