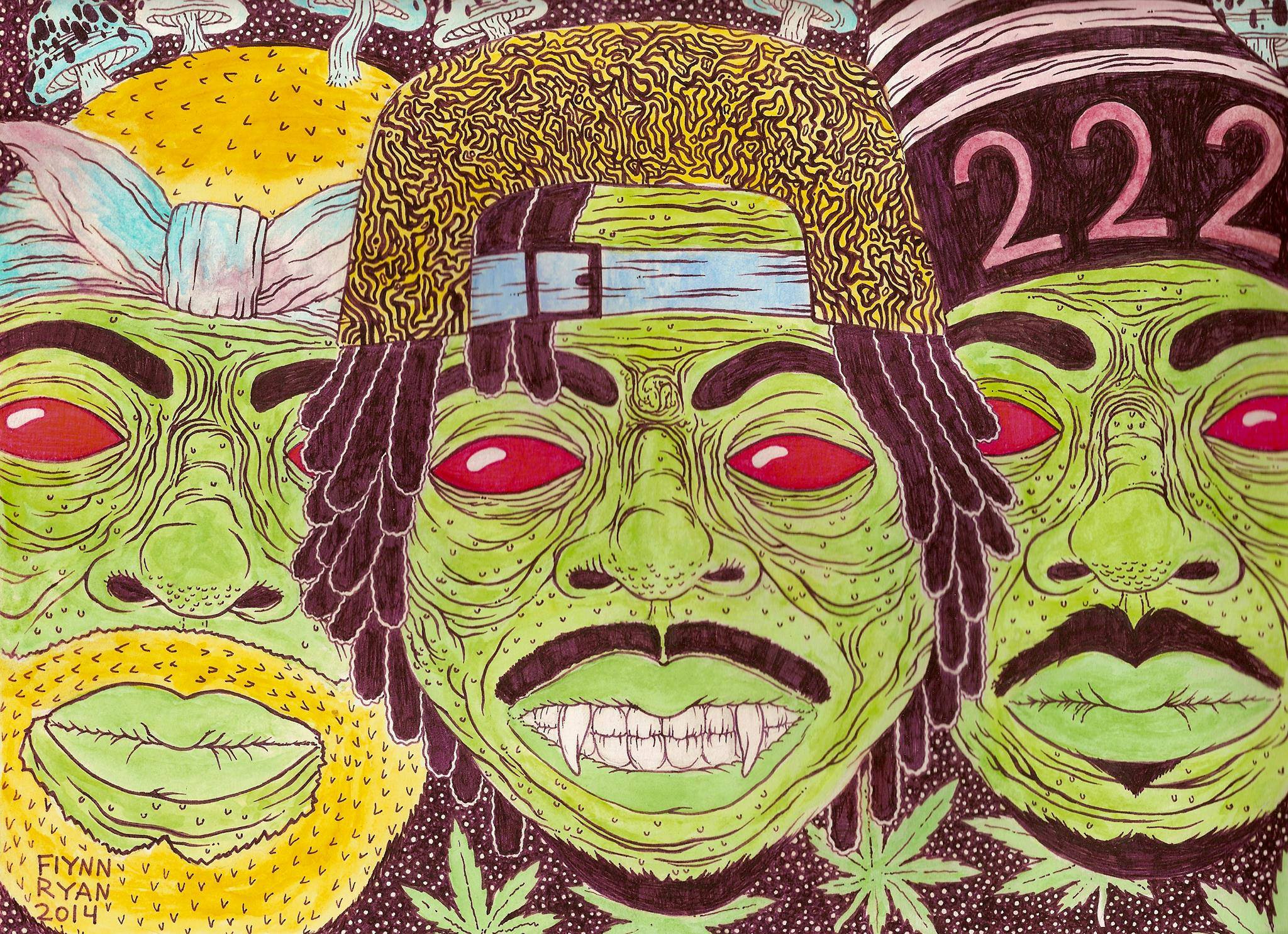 Flatbush Zombies’ music is horrorcore, fantasy and sci-fiction hippy Hip-Hop gone right. I’m usually far from a fan of horrorcore since I usually view it as shock value music and nothing more. These Zombies defy and refine that, because it is about a story, with a flow uniquely their own–complete with instrumentals that are usually haunting, as well as alluring. Meechy Darko, Erick Arc Elliott and Zombie Juice are the obstreperous trio.

With 3001: A Laced Odyssey — inspired by Stanley Kubrick’s 1968 innovative 2001: Space Odyssey, of course — you get the best of Flatbush with an old-school, out of space vibe at the same time; throw in the crazy vibrant base, the alluring chanting and the clever wordplay, as heard in “R.I.P.C.D” (the death of the music CD), and creativity in Hip-Hop is revived once again.

The opening and title track, “The Odyssey”, is Hip-Hop’s answer to David Bowie’s “Space Odyssey” and Prodigy’s “Out of Space”; it’s also the Zombie’s stamp on being distinctively unique, with violin sounds and emotive faint opera singer. Complete with a Hulk-referencing intro from Zombie Juice, the trio also reference back to those who have influenced their sound–because the past can and will always catch up to you, be it in a good or bad way… “This Is It” has a dope piano backdrop and enjoyable trap vibe; while “Good Grief” stands out with its deep violin and the climaxing smooth croons of a Neo Soul-stress. The single also plays out on the contradiction of the group, conscious of how the world work with poverty, racism, and the industry, seduced by the money, drugs and sex.

In “Trade Off”, we take a look at the Flatbush Zombies’ life; a double intake of weed due to the stress amounted by their past day jobs. Once they put their chips in what they believed in and loved (music), that tradeoff was happiness and enjoying life– instead of stress and anxiety. As far as “Ascension”, I prefer the second half of the track to the one-dimensional instrumental that could have used Meechy Darko’s gritty voice with his militaritic lyrics. “Fly Away”, on the other hand, gave me the feeling of being trapped but wanting to break free. The lyrics also furthered this by Meechy’s haunting intro: “Say hello to Satan, once you cross the bridge/ Screams turned to whispers, fighting in the mist/ I do not belong here; I think they clipped my wings/ Uncertain, unstable, do I even exist?”

Throw in the jazzy, 90s-vibe of “Spike Lee Joint”, and Erick Elliott — also known as “The Architect” — is the real machine behind the trio. It’s not difficult to see that Kubrick inspiration and director’s mind-set on 3001. And if you think that these guys should have made an album a long time ago, you’re wrong; this was an Odyssey worth exploring, waiting for, showcasing to the world (unlike a certain Jay Electro…) that they can: not only make a good album, but a great one.

You can peep Latrice’s YouTube “Sincere and Prince Show” right here via http://sincereandprince.com/.

Slaughterhouse rhyme-wrecker Joell Ortiz might not have the dopest album cover artwork (I would say that this thing to the left here was a parody of the old No Limit Pen & Pixel days. It ain’t), but no one’s ever going to question the BK’s A1 spitta’s taste in rhymes. And that basically sums up That’s Hip-Hop, an Illmatic-sized serving of rap music in it truest form with “bars that rule like a large prison”.

Yet, other than perhaps some enigmatic flows from hot newcomer Token on “Kill At Will” (arguably the album’s best track), peeps shouldn’t expect anything innovative or next level here. That’s OK. Domingo (Big Pun) laces the brunt of the LP, pumping out a hypnotic assortment of heavy electric riffs, funk breaks and head-nodding drum rolls. Highlights include Joell’s lyrical ESPN with “Last Man Standing” (“I’ll always be on first like I faced dumb pitchers” and “I’m used to lookin’ down with a smile/ I’m the Patriots offense– I ain’t been on the ground for a while.”); moments shared with Golden Age lyrical gat-passers, M.O.P. and Kool G. Rap; and a sick spot from “Lil Pun” Chris Rivers that’s only set back by the track’s formulaic Premo-wannabe production.

Minus the pair of corny hooks that finish the album, That’s Hip Hop is for rhyme-heads who also catch the feels to boom bap, appreciate this music genre in its truest form, and have no plans to ever stop doing so. Yaowa. 3.25/5 Bibles.

Every so often the great genre of what we love and know as Hip-Hop is blessed with a gift of rhythmic pleasure. This time, it’s Detroit native Elzhi who plays the role of Santa to music fiends with the release of his latest project titled, Lead Poison. The former Slum Village member delivers an album worthy of completely uninterrupted play, beginning to end. Twice even!

Ever since a future movie star then known more for his Common Sense was flyin’ under the rader, there’s no doubt the Midwest can often be overlooked in Hip-Hop’s overall landscape; but leave it to ever-blossoming Elzhi to Yeez his way to the forefront and carry the lead flag. The Articulate Assassin even recently stated that the “D” is “kind of a hard place to actually get up out of and do ya’ thing.”

Being able to entertain listeners on multiple levels is the true measure of an artist. Lead Poison does that and then some. The cover art is thought-provoking, with a caricature of Elzhi attempting to dodge a storm of cloud-raining pencils. The first track, “Medicine Man”, displays the struggle of an emcee trying to find the right words to compile a powerful verse in the song’s intro. That type of intent is felt throughout the brunt of tracklist, as even the song titles alone can lure one into a plethora of witty similes and metaphors. “Introverted”, “Egocentric”, and “Alienated” (a dope sci-fier) are names of songs typically not associated with the oft-overtly male chauvinistic Hip-Hop culture.

Every aspect of this project stands up on its own. The production from Bombay, 14KT, Joself, and others such as Quelle Chris and Oh No, offers a diverse arrangement of harsh boom baps and melancholy melodies, with lyrics that exhibit depth reminiscent of The Golden Era. Song concepts reveal a creativity and vulnerability unseen for far too long, leaving an effort that will not — at least here at #GeekSwag — go unnoticed.

Even after my first listen to the album, this writer was left feeling enlightened, entertained and most importantly reFRESHed! Elzhi forces an artist to want to make music — one of the highest compliments one can be paid. It’s early, but expect Lead Poison to “sicken” critics into year-end mentioning. That good. 4.5/5 Bibles.

In addition to appearances from fellow Visionairie emcee LMNO and the Swollen Members’ Madchild, Ev’s Dilated turntablist DJ Babu shreds the fuck out of “TBH.” A Whole New Cook‘s first released track “Preachers of L.A.” stands out, not only because it relates directly to the Cool Congregation of GHG, but it breaks down those young preachers’ spiralling descent into corruption for the love of money. Overall, this EP should grab the listener right from the opening track, a head-nodder of the same name, and never takes a dip in quality. Definitely worthy of a few spins. 3.5/5 Bibles.