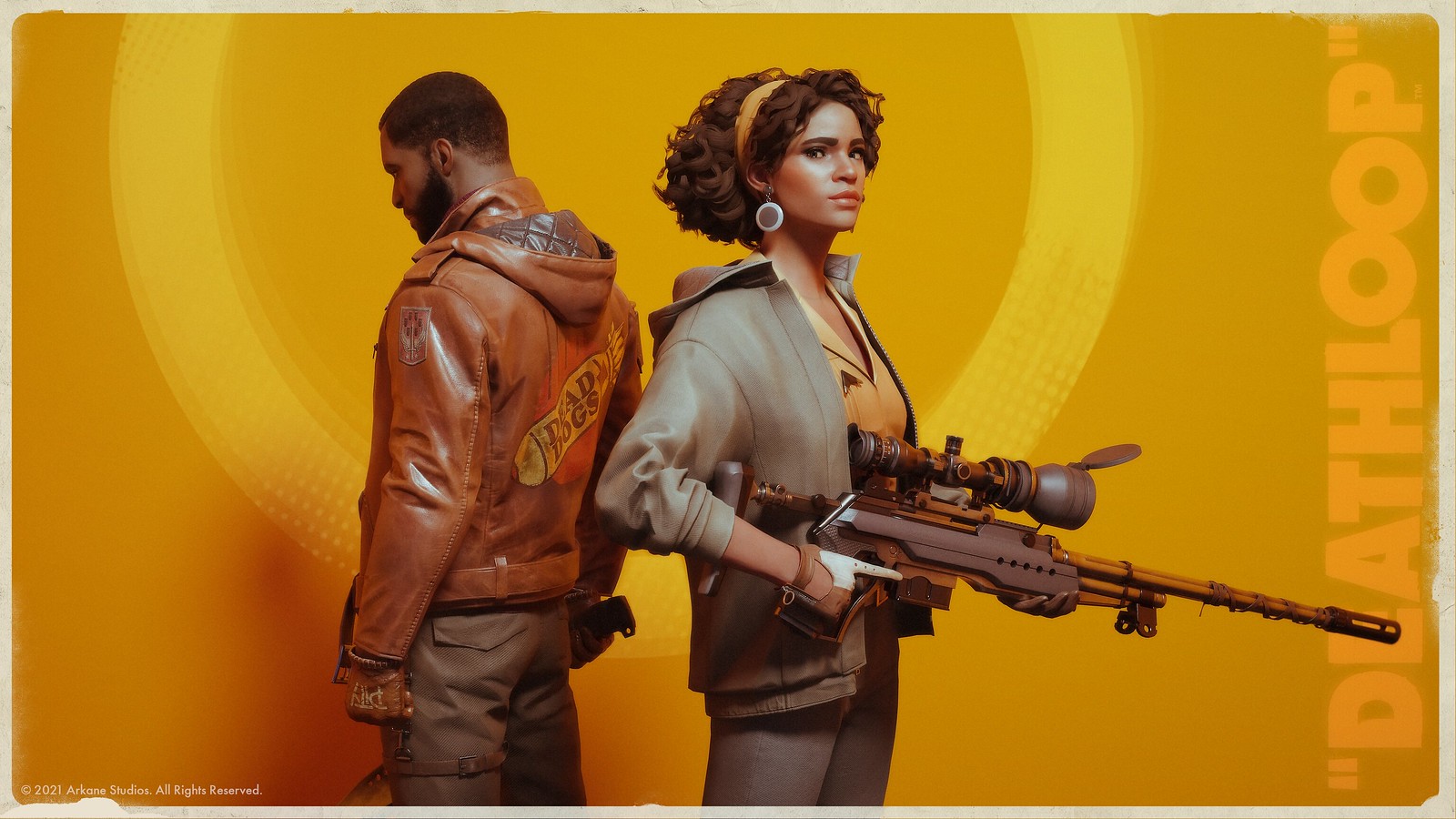 As exhausted as I was with the Deathloop marketing, it still remained  one of my most anticipated games of 2021. It seemed to have all the DNA from other Arkane Studios titles like Dishonored, but transformed into a super stylized first person shooter with a time loop system. What we got is so much more than that. Even after rolling credits, I still want to run more loops.

You play as a cool dude named Colt who’s tasked with breaking the time loop by assassinating 8 visionaries who are trying to protect the loop. It’s not as simple as find this visionary and kill them. Instead, you’ll have to investigate and manipulate the world to line the visionaries up so you can assassinate all of them in one loop…

The minute I heard the first pieces of dialogue from Colt (Jason E. Kelley) and his main target, Julianna (Ozioma Akagha), I immediately liked them. The voice acting is so good. Colt has no memory of who he is or who these visionaries are. All he knows is that he needs to break the time loop. Through each loop, Colt gains breadcrumbs of information about himself, the world, the visionaries, and Julianna.

Not only are breadcrumbs of information sprinkled to piece together narrative threads, but the narrative breadcrumbs are baked into the gameplay. Every piece of information offers clues on how you can get one step closer to breaking the loop. You get to know these visionaries, you get to know their path, their patterns, their quirks, their bonds, and ultimately their death sentence.

These breadcrumbs of information will always make you feel a sense of progression, even when you don’t complete a full loop because you “died”. I keep quoting die because it’s more like evaporate since this is a time loop; a DEATH LOOP. There isn’t a single loop where I didn’t gain helpful information on my ultimate task or on learning about the world of Blackreef Island. The story has some cool twists but the revelations are subtle as they’re mostly in documents and in game dialogue.

The world building is great but it’s not even the strongest part of Deathloop. The strongest part is the gameplay. For a team that’s always excelled in stealth combat, I was surprised to see how silky smooth the movement and gunplay felt. You can still use stealth but you won’t be punished for getting loud. Combining my gun with my Slabs (supernatural powers) to navigate Blackreef Island and push my way past the main “enemies” called Eternalists is an absolute blast.

The thing is, this isn’t a typical FPS where you need to clear an entire room of enemies to progress. The Eternalists are just obstacles to the main goal: gathering as much information as you can in a loop to prepare for the final loop where all Visionaries are assassinated. Your guns and Slabs are just there to help you solve the puzzle, because Deathloop is more of a puzzle game than anything. A puzzle game with damn good combat.

Deathloop isn’t quite a rogue-like, but having a time loop system can make it feel that way. In the first few hours I was annoyed that all the Slabs, guns, and trinkets (buffs) collected on a run were completely gone on the next loop if I “died”. I was still happy with the progress made toward the ultimate goal, but it still felt like something I earned was taken away. That changed once you unlock the ability to buy those items with a currency called Residium.

When you complete an area, you can spend Residium on guns, trinkets, and slabs you obtained. You gain Residium from specific objects and from the bodies of assassinated Visionaries. This allows you to carry purchased items in all future loops. Residium is what sets Deathloop apart from being a proper rogue-like. Another element that sets it apart, is a Slab called Reprise that allows 3 “deaths” before a new loop starts. Each time you “die”, you have to go back to your body to pick up lost Residium, which is kind of souls-like. Reprise, Residium, and having health everywhere on a map makes Deathloop very forgiving because it wants the player to explore and get creative.

By my final run, I would equip the Slabs Shift and Nexus in the morning to teleport to vantage points and quickly link Eternalists together so one headshot would drop them all like flies. By the evening, I would ensure Aether was equipped to turn invisible and sneak by large groups of Eternalists. You can only interchange 2 Slabs, 3 guns, and 4 Trinkets per time of day but the options give players so much freedom. Everyone would have approached each scenario and final loop in completely different ways.

After rolling credits I still want to go back and do more. Complete the Visionary assassinations in different ways, complete optional side activities, and try to Protect the Loop by playing as Julianna by invading other players games.

Julianna will visit Colt when he’s close to assassinating a visionary. If you play offline, Julianna will invade as an NPC. If you play online, you can be invaded by other players or just friend’s. You can also choose to play as Julianna to protect the loop and invade the world of another player. Julianna has unique Slabs like Masquerade where she can switch appearances with any NPC. You’ll have a separate progression system for Julianna. Invading players is an absolute blast and adds a completely different layer to Deathloop. It’s also canon….

There’s so much to explore! Despite this game having only four areas, you can visit these areas at different times of day (morning, noon, afternoon, evening). Each time cycle will offer different things to do, different Eternalists and visionaries to encounter, and different areas open up.

There’s a handful of optional mini games, puzzles, and collectibles. None of it feels like padding all of it adds to the world building. Deathloop is contained but rich with content. It’s enough to keep me looping back. I can’t believe I went this long without mentioning how stylistic this game is. The music, the atmosphere, the dialogue, the character outfits, the font, and color scheme all fit well into this super funky futuristic island. It’s style rivals Persona 5.

I don’t think Deathloop is a 5/5 Masterpiece. The Eternalist AI aren’t too smart and there are some classic, but funny, NPC bugs. NPC designs are re-used, but they look really cool and somewhat menacing like splicers from Bioshock. The graphics are great but they’re not as advanced as some titles we have seen in recent years.

Regardless, Deathloop is charming and it’s concept is very unique. It’s refreshing to see a game adopt a new formula to an over-saturated genre. By the end of your time with this game you’ll know every corner of Blackreef Island. I’m absolutely enamored with the game and any complaints I have are absolute nitpicks. Deathloop is dope. 4.75/5 Whiskeys.