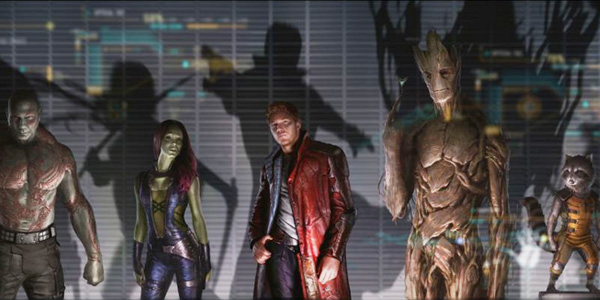 Even with all of The Avengers’ apparent prosperity of terrifying Ultrons, Hulk-busting Armors, and.. ahem.. Elizabeth Olsen, the Guardians of the Galaxy are the superheroes who currently own our geek-bleeding hearts.

Can you ever imagine anyone making that statement, cinematically?

Thankfully, I re-started my collection of comics around the time of Dan Abnett & Andy Lanning’s reboot of Marvel’s once-famed Cosmic Era (Annihilation: Conquest, War/Realm of Kings): The dawn of the rise of the everyone’s new favorite “A-holes”…

Favorite, because director/writer James Gunn and co-writer Nicole Perlman type up the most faithful, briskly paced Marvel comic adaptation to date. But rather than merely reflect an assortment of pretty panels to the ‘play, Guardians of the Galaxy opens new doors to the Universe — literally — and allows for a mega space-opera crossover by the time your grandkids are old enough to print out passes from Fandango.

Whether that crossover is Avengers or Star.. Wars, has yet to be determined.

GOTG is a fun, chuckle-out-loud, frantic thrill ride for sci-fi comic geeks, movie nerds (Gunn, in addition to Raiders of the Lost Ark, The Dirty Dozen and Back to the Future, you’ve got to be a huge Space Balls, Galaxy Quest and Starship Troopers fanboy, right?), and just about anyone else who can’t wait another couple years for Mark Hamill to smear off his animated Joker lipstick and turn into Darth Vader 2-point-0ld.

It’s also no coincidence that this new franchise arrived shortly after Disney added lightsabers to its already glimmering collection of Stan Lee & Jack Kirby’s characters under their own pair of big round ears. The colorful chemistry between Chris Pratt‘s Peter “Star-Lord” Quill and Han Solo (both “legendary” ladykillers), Zoe Saldana‘s Gamora and Leia Organa (take no shit sexiness), WWE wrestler Batista‘s Drax and C-3PO (utter, deadpanned confusion), Vin Diesel‘s Groot and Chewbacca (I am gRrrrr-ghghghg!!!), and Bradley Cooper‘s Rocket and.. R2D2 (think about it!) are of no coincidence (of course we’d all love to say Nathan Fillion’s Quaser is this film’s Luke; but, sadly, that never comes to fruition), yet all play within the realm of the Marvel Universe.

Yet while Guardians offers plenty of mockery, mimicry and satire, much of it is a doing such unto themselves; these Losers come straight from the pages of some of the finest comics you all need to read. In fact, the only artistic liberty Gunn took with Marvel’s most unheralded heroes is in making them more awesome.

GOTG might just be the most visually stunning and funniest Marvel movie to date, too. A pretty bold statement, considering the insane spectacle of a Helicarrier War that was Cap’s Winter Soldier and the ‘heim-lich hilarity of Thor’s Dark World; but the film captures all the impudent innocence of 70s/80s walkmen pop and b-grade gagathons, with an assortment of spectacular CGI landscapes that could only resemble a next-gen Mass Effect. Just wait ’til you see when Ronan (The Hobbit‘s Lee Pace, at his damnedest to “villainize” the oft-hero Kree Accuser) is faced with an eye-gouging swarm of Nova Corps.

If you care about plot any — and I guess you should — you know just about every movie within the MCU (Marvel Cinematic Universe) revolves around some sort of valuable artifact that leads to an even more rare/scarier artifact that has a most significant meaning toward the end of all existence. Aether. Tesseract. This.. orb thingamajig. Of course with all of this Infinity Gem talk, Josh Brolin dutifully makes his plentiful purple presence known to the Merry Marching Society. He’s ginormous. He’s scary. He’s menacing.

Thanos is so fucking perfect, it hurts.

Many of the film’s other villains are just as colorful, and quite accurate to the source material this side of alien asshole Yondu. Michael Rooker certainly hams it up like only he can, but the performance is not all that different than Walking Dead‘s Merle or even Gunn’s own Slithery Grant Grant. He looks like the guy who grandfathered young Pete in and around outer-space, although has somewhat of a different story going here. But hey, even if all of this sci-fientific mumbo-jumbo isn’t your cup of excelsior anyway, Pratt (Zero Dark Thirty) guides Quill’s adventure with enough charm, effortless swagger and well-timed buffoonery to have us all (g)rooting for him…

GOTG sets its own stage with some critical scenes of Quill’s Earth life and the legacy he has to carry. When our hero intends on carrying out his undying domestic revenge, it’s not the Badoon who feel the wrath of Star-Lord; no, it’s a race that, without spoiling too much, makes the case for a Planet Hulk movie that much likelier. And, at the very least, trust that Star-Lord meeting Tony Stark for the first time will be nothing less than a momentous occasion.

For Coop’s Rocket, nearly every scene is a momentous occasion. It’s still hard to imagine how anyone pulled this shit off, and — despite the fact there are some folks out there who’d prefer a more British tone to cinematic Rocket’s New York City dialect — there’s no question as to which one of these bounty hunting ass-assins steals the show.

There’s even a moment of heartened poignancy when Rocket dishes out all the disaster of his mechanically tampered origins to his new teammates, and the superfun hypocrisy of the raccoon’s machine-gun murderous rampages that come in between his sweet and tender bromancia with Groot.

But no worries, Rocket. If Rotten Tomatoes and Comic-Con are any indication, we’re all hooked on a feeling now.

Marvel’s Guardians of the Galaxy in theaters nationwide this Friday, August 1st.