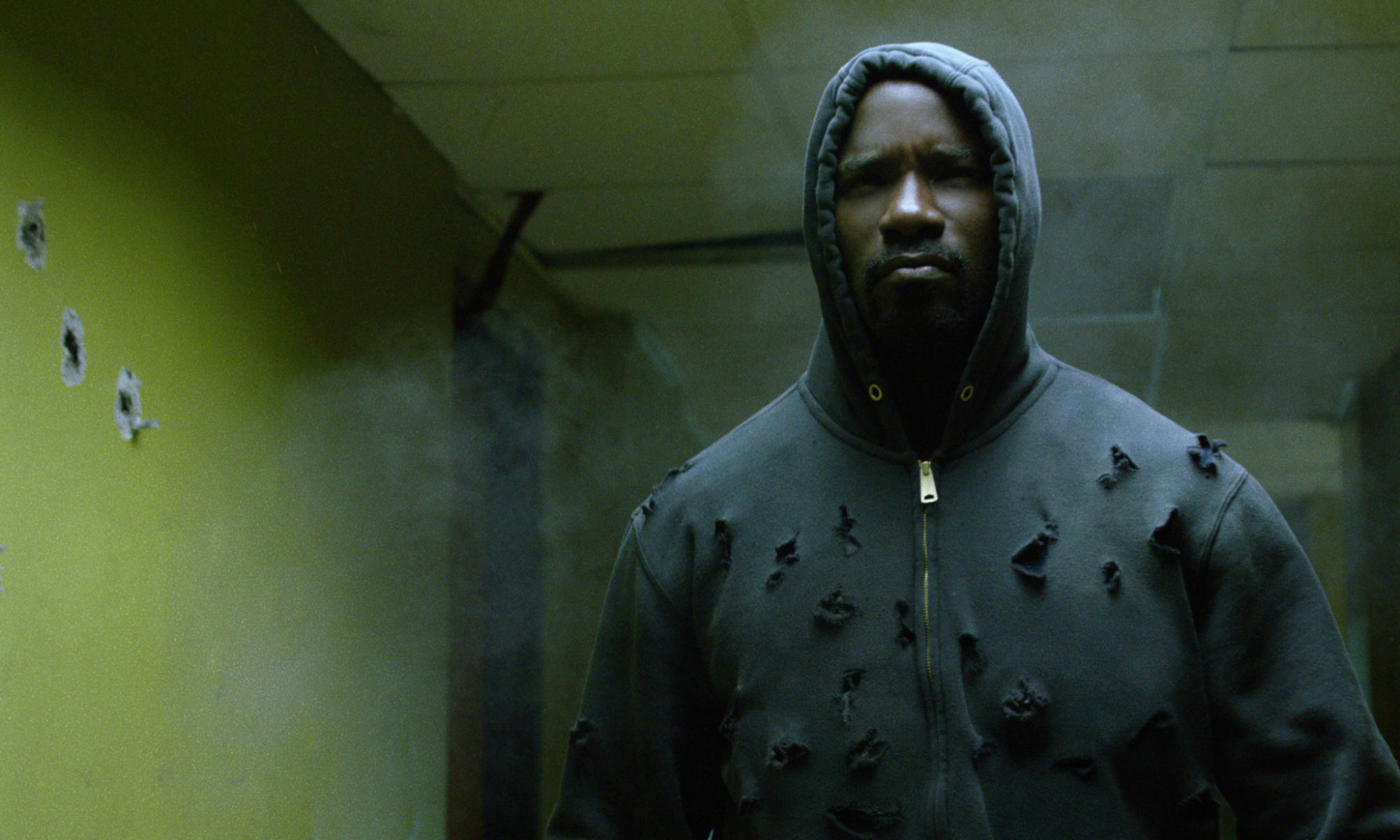 Luke Cage’s first multimedia appearance was on The Super Hero Squad Show on Cartoon Network. Voiced by comedian Lil’ JJ, this version is a member of Heroes for Hire alongside Iron Fist and Misty Knight in the episode “A Brat Walks Among Us“. He also has a cameo appearance in the very first episode “And Lo… A Pilot Shall Come!“. 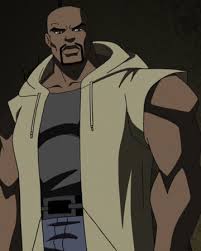 Luke Cage appeared in The Avengers: Earth’s Mightiest Heroes on Disney XD. Voiced by Christopher B. Duncan ( ‘The Jamie Foxx Show‘, ‘Black Lightning‘), this version of Cage is a primary member of Heroes For Hire, using his powers as a way of earning money by working for hire to anyone who needs help. In the episode “To Steal an Ant-Man“, Cage and his partner Iron Fist are hired by Hank Pym to retrieve the stolen Ant-Man suit from Scott Lang.  Pym, in the end, hands the mantle of Ant-Man over to Lang and Lang ends up joining Heroes for Hire. This version dislikes being referred to as ‘Power Man‘. Later on, Cage becomes a member of the New Avengers to help stop Kang The Conqueror and  to fight off Galactus’ invasion of Earth( they charge Tony Stark for their services in these fights).

A teen version of Luke Cage appears as one of the main characters on the Ultimate Spider-Man cartoon series on Disney XD. Voiced by actor Ogie Banks, this version is part of Spider-Man’s teenage S.H.I.E.L.D.-sanctioned team (along with Iron Fist, White Tiger and Nova). Luke is the “street-smart” muscle and the most mature member of the team.

“Power Man. If he calls himself Spider-Man, then I’m calling myself Power Man. It’s cool and doesn’t scream I have low self-esteem”

Luke adopts the name “Power Man” as he feels that he should name himself after his powers. He also has an official superhero uniform (a sleeveless suit which is yellow on top and the rest is black, metal plates on his biceps and ankles, yellow boots). He also wears wraparound sunglasses when in ‘Power Man’ mode.

Power Man’s main ability is his enhanced level of super strength (he can stop a moving train and fight The Juggernaut one on one). He is physically the strongest member of the team and is even stronger than Spider-Man and Nova( before Nova tapped into the full power of his helmet). He can lift about 25 tons.  Nick Fury refers to him as ‘the strongest guy this side of the Big Apple without green skin‘.

Luke also has impenetrable skin that’s tougher than titanium and his bones and muscles are denser and much thicker than any human being. On one occasion, Luke’s body demonstrated that vampires can’t penetrate his indestructible skin(Even Count Dracula himself is incapable of biting Luke). The episode “The Parent Trap” reveals that Luke received his powers as a child when he ingested a S.H.I.E.L.D. version of the Super Soldier Serum developed by his scientist parents (Walter and Amanda Cage) during an escape from a plane. Luke Cage is presented here as his actual birth name rather than an alias. He also finds his parents were working for the villain Scorpio because they were lied to about Luke being captured and promised their son in return. He soon reunites with them at the end of the episode. Luke continues to be featured on the series until S.H.I.E.L.D. graduation in the series finale.

Luke Cage’s first live action appearance was in the Marvel/Netflix shows whose lineup included Daredevil, Jessica Jones and Iron Fist. The interconnected series of shows were all set in the Marvel Cinematic Universe. These shows gave the viewer the urban streel level perspective of how life has changed in New York after the alien invasion in The Avengers( 2012). NOTE: The invasion is often referred to in the various shows as ‘The Incident’.

Jeph Loeb, executive producer of the shows, explained that “Within the Marvel universe there are thousands of heroes of all shapes and sizes, but the Avengers are here to save the universe and Daredevil is here to save the neighborhood … It does take place in the Marvel Cinematic Universe. It’s all connected. But that doesn’t necessarily mean that we would look up in the sky and see [Iron Man]. It’s just a different part of New York that we have not yet seen in the Marvel movies.”

The series Jessica Jones was about a hot-tempered, sarcastic, badass female private detective in Hell’s Kitchen. She has been rebuilding her personal life after her short-lived stint as a superhero ended in tragedy. The character of Luke Cage is introduced as a bar owner whom Jones meets during an infidelity investigation.  Luke is introduced already having his powers. His powers are first revealed in a bar fight when he easily holds off half a dozen men and one of them tries to stab him in the neck with a broken bottle. Luke later confirms his powers in Jessica’s apartment when Jessica explains she came to his bar to fix an incident she caused. Luke responds by holding a portable buzz saw to his stomach until it smokes and sparks. After Jessica sees his undamaged skin, Cage says ” You can’t fix me. I’m unbreakable“.

The popularity of Colter’s portrayal of Cage caused the character to spin off into his own show. 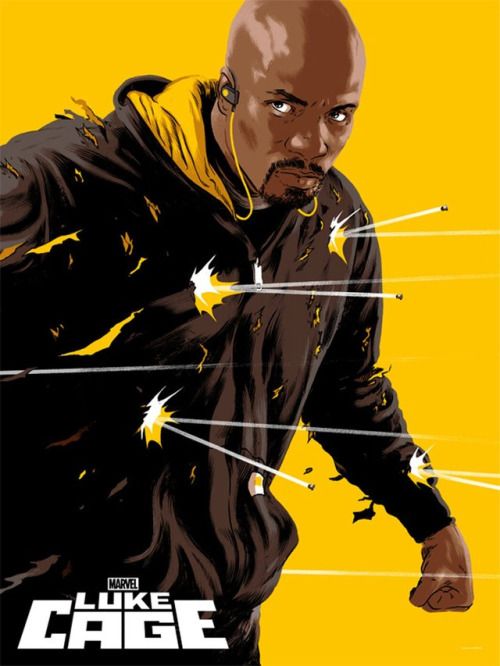 “You can’t burn me, you can’t blast me, and you definitely can’t break me. You wanna test me? Step up. I’m right here. I ain’t going nowhere. You know where to find me. I am Harlem, and Harlem is me.”
―Luke Cage

Cage next appears as the title character in the 2016 Netflix series, Luke Cage with Cheo Hodari Coker serving as showrunner.

Season One has Luke Cage living as a fugitive trying to rebuild his life in modern-day Harlem, New York City after the events of Jessica Jones. He works quietly as a janitor in Pop’s Barbershop and as a busboy/bartender at the Harlem’s Paradise nightclub. However, he is soon pulled out of the shadows and Luke soon becomes Harlem’s resident superhero/problem solver (Cornell Stokes even refers to Luke as ‘ Harlem’s Captain America’).Luke must fight a battle for his city from the schemes of Cornell ‘Cottonmouth‘ Stokes, his corrupt politician cousin Mariah Dillard and Willis ‘Diamondback‘ Stryker( who is his half-brother in this version).

Luke is soon a modern day folk hero in the streets with even rapper Method Man dedicating a song in his honor ( ‘Bulletproof Love’). This season also shows the viewer Luke’s past that he had tried to bury including the sabotaged prison experiment that left him with super strength and unbreakable skin. The season ends with Luke’s fugitive status being exposed and him having to return to Seagate Prison.

Season Two shows Luke Cage has become a celebrity on the streets of Harlem after clearing his name during the events of The Defenders.

One episode features Luke performing athletic feats using his powers that is covered by ESPN. However, being so visible has only increased his need to protect the community and pushes the limits of who he can and can’t save. With the rise of a formidable new foe called Bushmaster, Luke is forced to confront the fine line that separates a hero from a villain. The season ends with Luke becoming the new ‘unofficial’ crime lord of Harlem, inheriting the Harlem’s Paradise nightclub.

Mike Colter reprised his role in The Defenders, a crossover miniseries that brings Daredevil, Jessica Jones, Luke Cage and Iron Fist all together in one series. The heroes are shown as an unlikely quartet  brought together with one common goal – to save New York City from the ancient organization called The Hand.