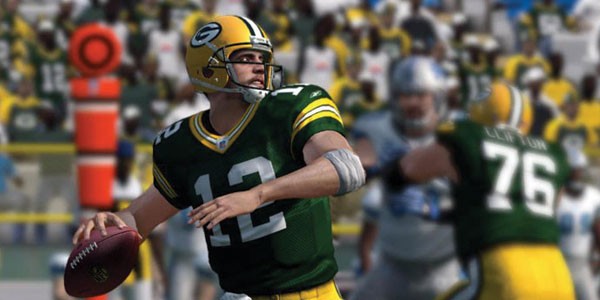 Let’s just get this out of the way right now: Madden ’13 is a mighty damn good football game.

But, let’s jump to the other side of this sickening dichotomy, and give reason as to why you should still buy the only NFL game on the market: Passing. Running. Catching. Tackling. Coaching. Presentation. Music. Graphics. Controls.

There hasn’t been a football game this good in a long, long time, my friends.

Madden ’13 has some of the very best sports game physics ever with its brand new Infinity Engine, particularly on the defensive side of things. With heavier collisions and tighter bump-and-run coverage, players have no choice but to follow their blockers, pick their spots, and be careful with the football. High player ratings are nice, but will no longer save you from stupid plays. Just fucking around with Tom Brady in a preseason game against the Eagles the other night led to some pathetic passes that would make Ryan Leaf happy.

Yes, that was your mama that just yelped out “don’t do it!”!!

With that said, if you weren’t good at Madden before, then you probably won’t be good at it now. Actually, I was never really good at this game either (2K basketball is my shit), but now the Infinity Engine is helping this frustrated journeyman learn the craft. Some of the passes I had former Razorback (and brief Wolverine, eh) Ryan Mallet gassing to Aaron Hernandez and Jabar Gaffney were giving my preseason-pineneedled Brady goosebumps.

Running has also been a problem with Madden in the past. Last year, Chris Johnson could get an easy 128/game. Sure, he was doing that in real life the year before, but players will now feel like they’ve earned every yard. No longer can you just stiff-arm your way to the end zone with rating superpowers, unless your Gronk, of course. But, really, there’s a reason now why good players are good, and that’s none more obvious than when you make the right move at the right time. Sure, there’s going to be more sacks per game (6-7 per), but I’m sure developers wanted to make defense fun too.

Hence the huge amount of picks.

But with more control of tossing the pigskin this season, there’s solid reasoning as to why such bonehead plays end up detrimental. There’s also buttons (right stick, right trigger) to help evade incoming pass rushers, as well as ways to make sure those passes end up at least out of the reach of ball-hawking secondarymen (left stick after the toss). Tackling these would-be, well.. gawking.. wideouts is also just as fun. You can helicopter whirl backs with Justin Smith; skyscrape shoulder first with Polamalu; and, yes, gutwrench suplex with the purple-and-black #52.

Collision detection is so good, it’s almost silly when multiple players trip and crumble over each other after nearly every whistle. Thankfully this is only the tip of the iceberg for the Infinity Engine, so these profound controls will only get stronger in future editions.

Now, all this goodie-goodie talk about this year’s Madden is only making the Rev even angrier. Why isn’t there a damn offline multiplayer season, franchise, dynasty, career, whatever!!!?! Why, EA, why? I suppose I can only blame myself for arranging such a mode with a fellow group at my fantasy football draft this past Monday.

And I’m thankful I had my Fantasy Draft season in Madden last year with Vick, CJ, Suh, and a ton of good ol’ Michigan boys manning my Pats. Now, it’s time to play with the real deal. Not a bad thing if you’re using New England, of course.

Moving on to more positive notes, Madden ’13 also has a brand new presentation. Other than those (and there were many) unable to find the Franchise Mode — that’s because it don’t exist no more, homie — the new menu is slick, easy to nav’, and thankfully lacking the powerpop metal of Five Finger Death Punch or that ridiculous “6 Foot 7 Foot” Lil’ Wayne & Cory Gunz song that would play about 35 times a freaking game. It’s simply orchestratic shit from the NFL Network, and that’s it.

The stadium tunes also pack generic riffs of classic songs, so you’ll hear a little bit of Ozzy, a little bit of Coldplay, a little bit of Black Keys, a little bit of Foo Fighters. Hold up. Did you just say Coldplay? Yes, why yes I did, good lad. But trust me, this score’s a lot more realistic to NFL stadiums than anything before. And don’t worry hip-hop heads; there’s still some funky drumloops that’ll bump throughout Raymond James.

If anything, the music is almost too brief, and too low in comparison to the other sounds of the game (which are all pretty much terrific, btw), but I’m sure that can be worked on next year… as well as MY DAMN CUSTOM STADIUM SONGS!

If NBA 2K and NHL allow the option (which easily separates these franchises from MLB and Madden), then I can’t see why EA can’t slide it in next year. I want to hear “Thunderstruck” for every Foxboro home opener. Period.

Up next, the new game-callers: yay for Patriot-loving Phil Simms and yay.. even for Patriot-hating Jim Nantz. There’s arguably no better team in the booth than these guys (don’t even say Joe Buck and Troy Aikman!), and though their adlibbing can still be quite off in some cases (i.e. a terrible catch that was really a terrible throw), they’re a far better choice than last year’s Gus Johnson and Chris Collinsworth. And, despite the notion that it’s not the sports commentators actual faults, Simms and Nantz just sound better together. Now, if only they would continue their banter during the tremendously redundant instant replays — which still don’t always cover the best angles on close calls, mind you.

Missing, again. And again. And again. And again: footage from other season games! If EA Sports wants to make Madden so realistic and lifelike, why aren’t there cutscenes or boxscores from other games around the league? I’d love to see an amazing 1-hand snag from Brandon Marshall during a timeout called during one of my games. Or how about sending the half-time show off to Chris Berman, Tom Jackson and Keyshawn (or Marino, Boomer and James Brown if it’s CBS) for some highlights and commentary from around the league? How awesome would that be!? And, shit, they got every ESPN dude — even Skip “Damnit Skip” Bayless Tweeting blurbs during the Connected Career Mode, so why not?

It would keep a long ass Mode we have to play on our lonely so much more enticing.

Here’s some other “bitching” blurbs about Madden ’13:

2 Bibles for EA having the audacity to minus the offline multiplayer franchise/dynasty and fantasy player modes. Bitchnads.